in News Articles 2013
Share on facebook
Share on twitter
Share on email
Share on whatsapp
Andre Prinsloo and Ruhan Janse van Vuuren, the artists who created the 9m bronze-plated statue of Mandela at the Union Buildings in Pretoria, have apologised for the rabbit that was secretly added to the work.
image: The rabbit hidden in the ear of the statue of Nelson Mandela. (AFP). From news24.com
Media Statement on the Mandela Statue:
Koketso Growth (Pty) Ltd, a cultural heritage and tourism development body with wide experience in the creation of bronze sculptures for public display, was appointed by the Department of Arts and Culture in May 2013 to undertake the entire process around the creation and installation of the 9m figure of the late Former President Mandela at the Union Buildings.
After intensive consultation, it was agreed with the Department of Arts and Culture and the various other government departments involved, that Pretoria-based artists Andre Prinsloo and Ruhan Janse van Vuuren would be appointed to complete the figure.

From the onset, the government’s ‘Statue Steering Committee’ and very large professional team required to successfully complete this project were under considerable pressure, working at speed towards the deadline for unveiling, 16 December 2013. Before casting commenced on the 9m figure, there were discussions around whether patterns or symbols should feature on the figure and it was decided that no marks of any kind, including signatures, would be engraved on the surface of the bronze, and the artists were instructed accordingly. It was always the intention, however, that the names of the artists would be prominent on the plaques still to be installed in the area surrounding the figure. Given the very short time-frame for the project it was not possible to complete the plaques by 16 December 2013.

Mr Dali Tambo, CEO of Koketso Growth said, “It is regrettable that the artists chose this way of expressing their opinion about not signing the sculpture, and that they felt it should be kept secret from their clients, Koketso Growth and the Department of Arts and Culture. Our working relationship throughout the project was one of great trust and mutual respect, and I really feel that at any time they could have discussed the issue and not have resorted to what can almost be seen as a senseless prank. Along with Minister Mashatile, we accept their apology but remain saddened by the attention this is receiving, which does not do justice to the beauty and triumph of the 9m figure of Madiba.” 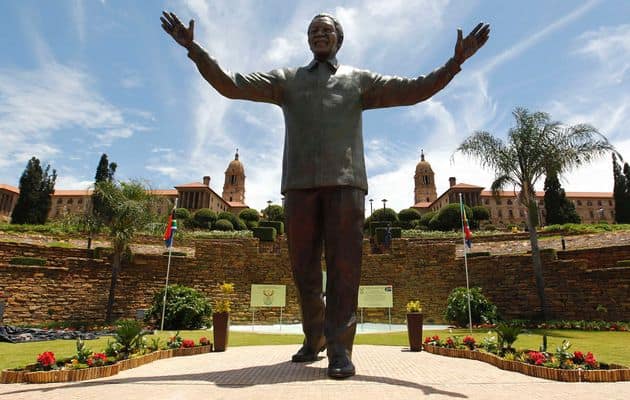 A 9-metre bronze statue of the late former South African President Nelson Mandela is unveiled as part of the Day of Reconciliation Celebrations at the Union Buildings in Pretoria December 16, 2013.
Image by: THOMAS MUKOYA / REUTERS
From timeslive.co.za