Cynthia Becker reviews Hassan Hajjaj’s recent exhibition, ‘My Rock Stars,’ which ran until 6 March 2016 at the Worcester Art Museum in Massachusetts. ‘The commercial feel of his work should not detract from the seriousness of his artistic mission,’ writes Becker, ‘His photographs can be characterised as a reflection on transnational diaspora communities, capturing the innovative cultural and aesthetic forms immigrants have created in their new homes.’ 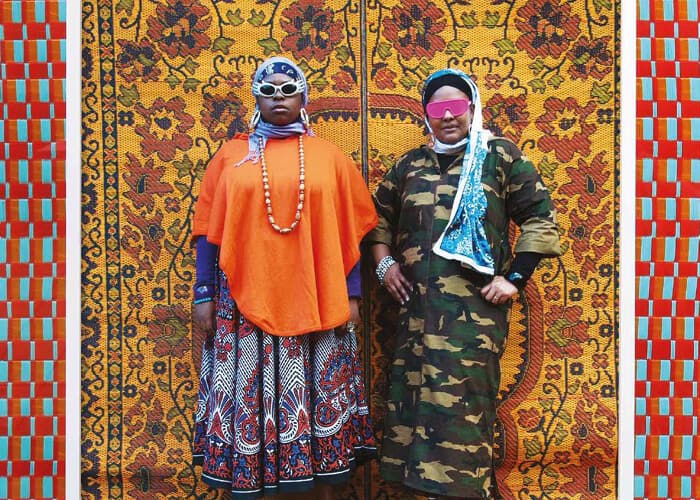 In his video installation entitled My Rock Stars Experimental, Volume 1 Moroccan-born artist Hassan Hajjaj combines nine separately filmed performances by musicians who inspire him – all of whom are associated with the African diaspora. Gnawa, jazz, hip-hop and capoeira musicians perform one-by-one and each, in turn, listens to the others, tapping to the beat or swaying to the rhythm. Hajjaj’s work brings together people who could relate to his own immigrant experience – Jamaicans, Brazilians and Nigerians – who, like Hajjaj, live far from their homelands after having migrated to London.

‘Hassan Hajjaj: My Rock Stars’ at the Worcester Art Museum was organised by Newark Museum curator Christa Clarke and also includes individual photographs of each performer. Hajjaj uses colourful plastic mats for both the photographs’ backdrops and the frames themselves. He designs the clothing worn by his models and prints each photograph on a high-gloss aluminium panel that gives the images a sharp and vivid finish, resembling product packaging. However, the commercial feel of his work should not detract from the seriousness of his artistic mission. His photographs can be characterised as a reflection on transnational diaspora communities, capturing the innovative cultural and aesthetic forms immigrants have created in their new homes. 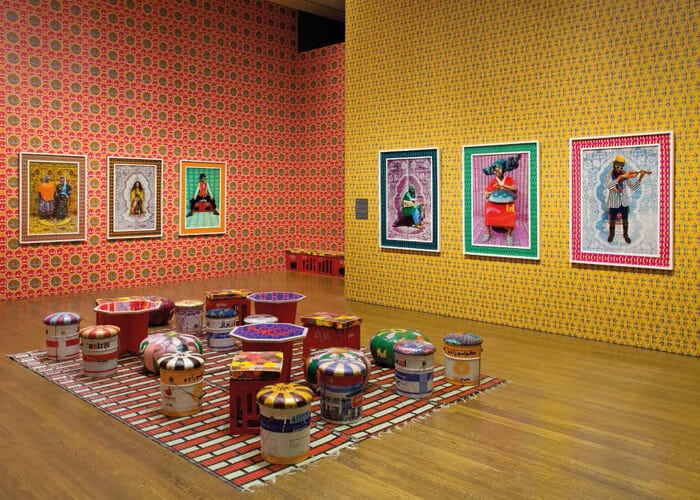 Hajjaj moved to London from Morocco as a teenager in the 1970s and bonded with those who also felt like outsiders. “As immigrants, we were thrown together inthe same place, we were searching and we had to find our own way and create our own village,” he explains. He worked as a DJ in underground clubs and eventually began collaborating with stylists on music videos and fashion shoots. These experiences inspired him to photograph those who were not recognised by the mainstream – his own ‘rock stars.’

Hajjaj’s rock stars live beyond the quest for money and fame. One example is the portrait that he took of Muneera Rashida and Sukina Abdul Noor, the so-called ‘Hip-Hop Hijabis.’ Muslim converts born in England to Jamaican parents, they formed the hip-hop and spoken word duo Poetic Pilgrimage. The song they perform in Hajjaj’s video is called No More War, seeking to counter Islamophobia and question stereotypes. Hajjaj also photographed another powerful female performer, the British-Nigerian musician Helen Parker-Jayne, who goes by the stage name The Venus Bushfires. In the video, she performs a solo on a Swiss-made hang drum, which has a hypnotic sound that blends well with her singing voice. The Venus Bushfires styles her hair with a stick oriented horizontally, using hair extensions to turn it into a large moveable sculpture. Hajjaj took care to adorn her signature hairstyle with a Moroccan-inspired turban, dressing her in white cat-eye glasses and a Moroccan tunic and shoes. Her portrait has both high fashion and vernacular elements. She appears to exist outside of time and place, imparting a simultaneously vintage and futuristic feel.

Hajjaj patterned studio backdrops are reminiscent of those used by Malian photographers Seydou Keita and Malick Sidibé but his primary source of inspiration was having his own picture taken as a child by itinerant Moroccan photographers. The Worcester Art Museum held a Community Day during which Hajjaj set up a pop-up studio inside the museum and photographed visitors. He welcomed the spontaneity of people interacting with him and continued his aesthetic of photographing people from below to give them an empowering and theatrical appearance. 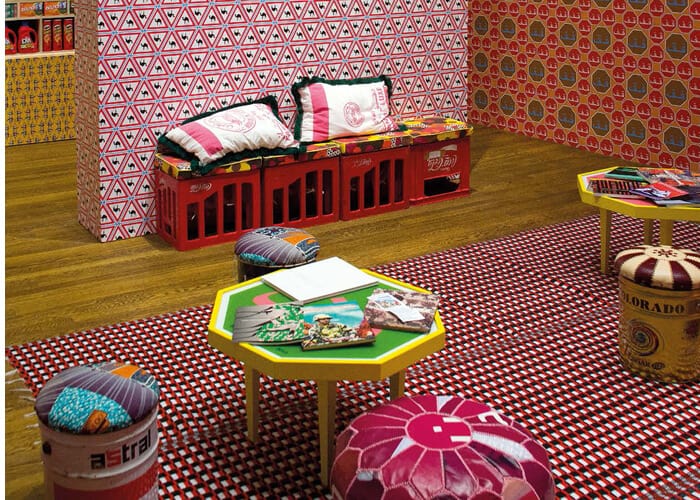 The exhibition at the Worcester Art Museum creates a more reflective space than his pop- up studio could, presenting a place where people can slow down and really experience the work. His installation includes several Moroccan-style sitting areas designed by the artist from recycled materials: plastic Coca-Cola cartons and paint cans from Morocco that he covered with cushions,which were created from imitation Louis Vuitton vinyl fabric and pillows made from flour sacks. The script on the low tables, typical of Moroccan homes, spells qaf meaning ‘stop,’ in Arabic, indicating that one should linger in the space. He repeated the Arabic word for ‘stop’ and ‘wake up’ on the bold, colourfully patterned wallpaper that adorns the interior of the exhibition space, as well as a large brass sign that says ‘no pissing’ (also in Arabic), referring to the English pun ‘take the piss,’ meaning to mock someone. Such mundane commercial products as sardine cans, shampoo bottles, Pringles cans and dishwashing detergent arranged on a series of built-in shelves create bold, repetitive patterns typical of Islamic ornamentation and, at the same time, resemble the interior of a family-run shop in Morocco. Hajjaj, who now divides his time between London and Marrakech, intentionally fuses cultural elements to blur geographic boundaries and reference his dual heritage.

Hajjaj’s multimedia installation breaks down conventional hierarchies of value in the art world and suggests a lived, globalised experience. Despite the hardships sometimes experienced by immigrants, Hajjaj’s rock stars are not disempowered individuals or victims but have a sense of agency and suggest the potentiality that the diaspora experience can offer. They, as well as their photographer, express how we can all thrive in an interconnected world.

Cynthia Becker is Associate Professor in the History of Art & Architecture Department at Boston University. She specialises in the visual and performing arts of Northwest Africa.

‘Hassan Hajjaj: My Rock Stars’ runs until 6 March 2016 at the Worcester Art Museum, Massachusetts, USA. The exhibition has been organised by the Newark Museum.