Henri Abraham Univers: ‘Time is Love’ at Out of Africa Gallery

A very sunny group show, in the grayness of our days, gives us the colour, light and comfort that we so badly need! Three African artists – Henri Abraham Univers, Prince Galla Gnohité, Méné – put love, happy vitality and sweet dreams in the spotlight. 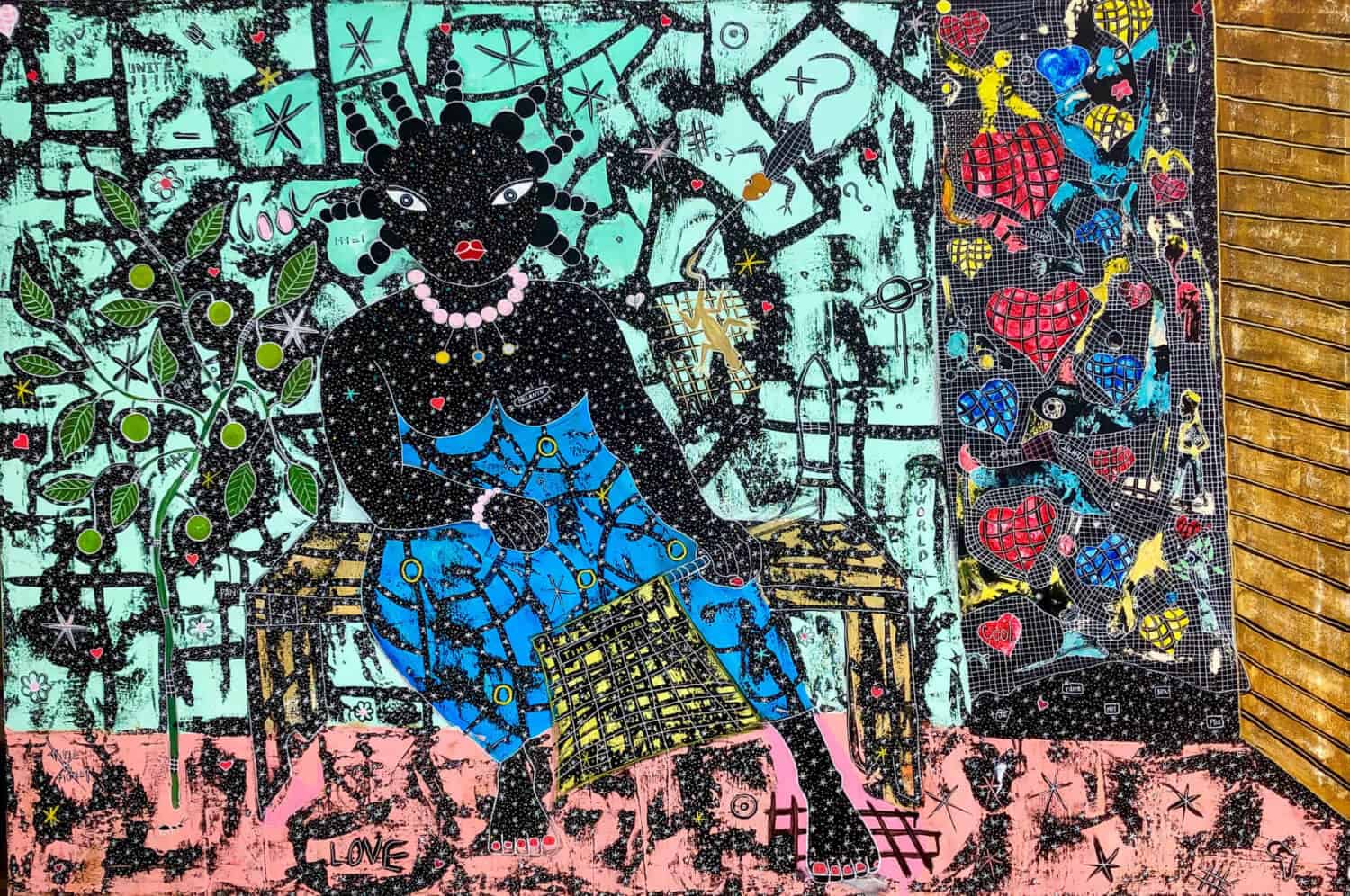 When you have lived a hundred lives, in a hundred places around the world, is it any wonder that you would choose to call yourself Henri Abraham Univers?

Henri Abraham’s origins are in France and Burkina Faso. He studied cinema and practised many trades in his life among these countries and other places (notably the Ivory Coast and London where he currently lives.) Is it surprising then that he would become a fine artist whose works express something universal and cosmic?

Arriving late to fine arts creation and after exploring other forms of artistic expression, Henri Abraham Univers realised that painting was his path. As he was approaching his forties in 2013, he left all his other activities to devote himself to this path.

Encouraged by a Polish artist, he presented works for the highly selective exhibition of the Royal Academy of Arts, in London. To his surprise, after only a year of practice, he found himself there, among nearly twenty thousand other candidates.

This event propelled Henri Abraham to the forefront with exhibitions in the United Kingdom, France, Spain, Morocco, the United States, Belgium, Nigeria and others. His works were also acquired by collectors!

Although he also devotes himself to sculpture and other forms of visual art, it is through his painting that Henri Abraham Univers is known and recognized. 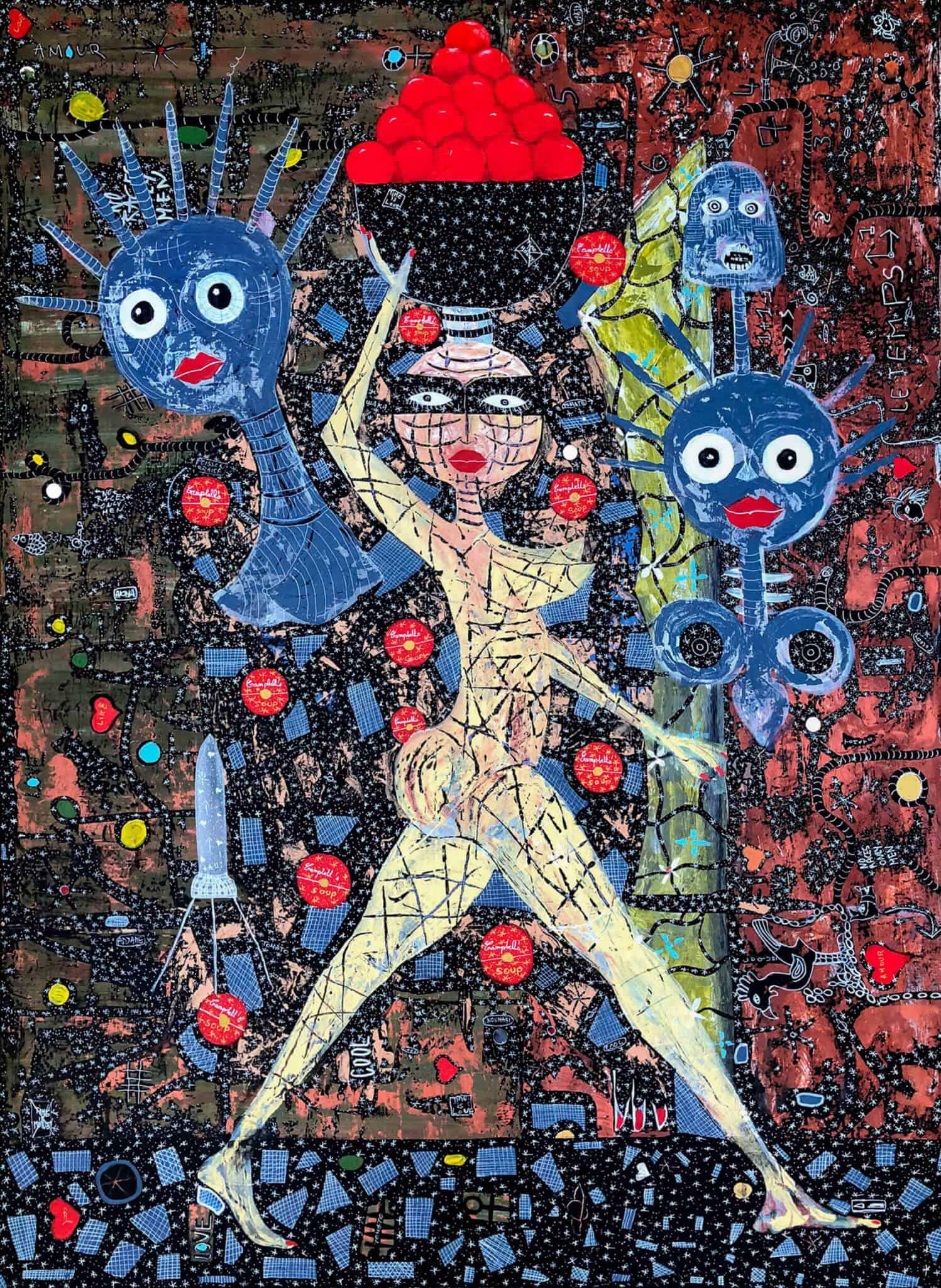 His paintings all bear the same meticulous trademark, whatever their format and theme; a starry vault that encourages us to want to always go further, always beyond what is immediately perceptible, while at the same time fills our minds with as many questions.

This is the most immediate of his “signatures”, a common thread that unites them together in the labyrinth of his creation, drawing his inspiration from all the world’s sources.

Finishing his canvases, once the motif has been executed, with this seedling of stars which occupy all the vacant space, is a form of priesthood for the artist.

His mission for the universal and his call for the unity of man and the world is constantly referenced by inscriptions throughout his works (“1 + 1 = 1”, “time is love”, “spider weaving thread of love”, “melanin found everywhere in all universes”, …); the theme of universalism returns again and again as a leitmotif which guides the painter in his life and in his work.

The question is even more noticeable in this exhibition for which he has chosen to present us with a kaleidoscope of his creations and without a single theme. In fact, between political satire (Black president); references to the cosmogony of the Dogon of Mali (The cat, the bird, and the calf); the sacred hornbill bird of the Senufo (mainly from the Ivory Coast) and allusions to the Mossi culture of his father, with its improbable blue Biiga (fertility doll) … the field of possibilities is wide and the artist explores it without reluctance! 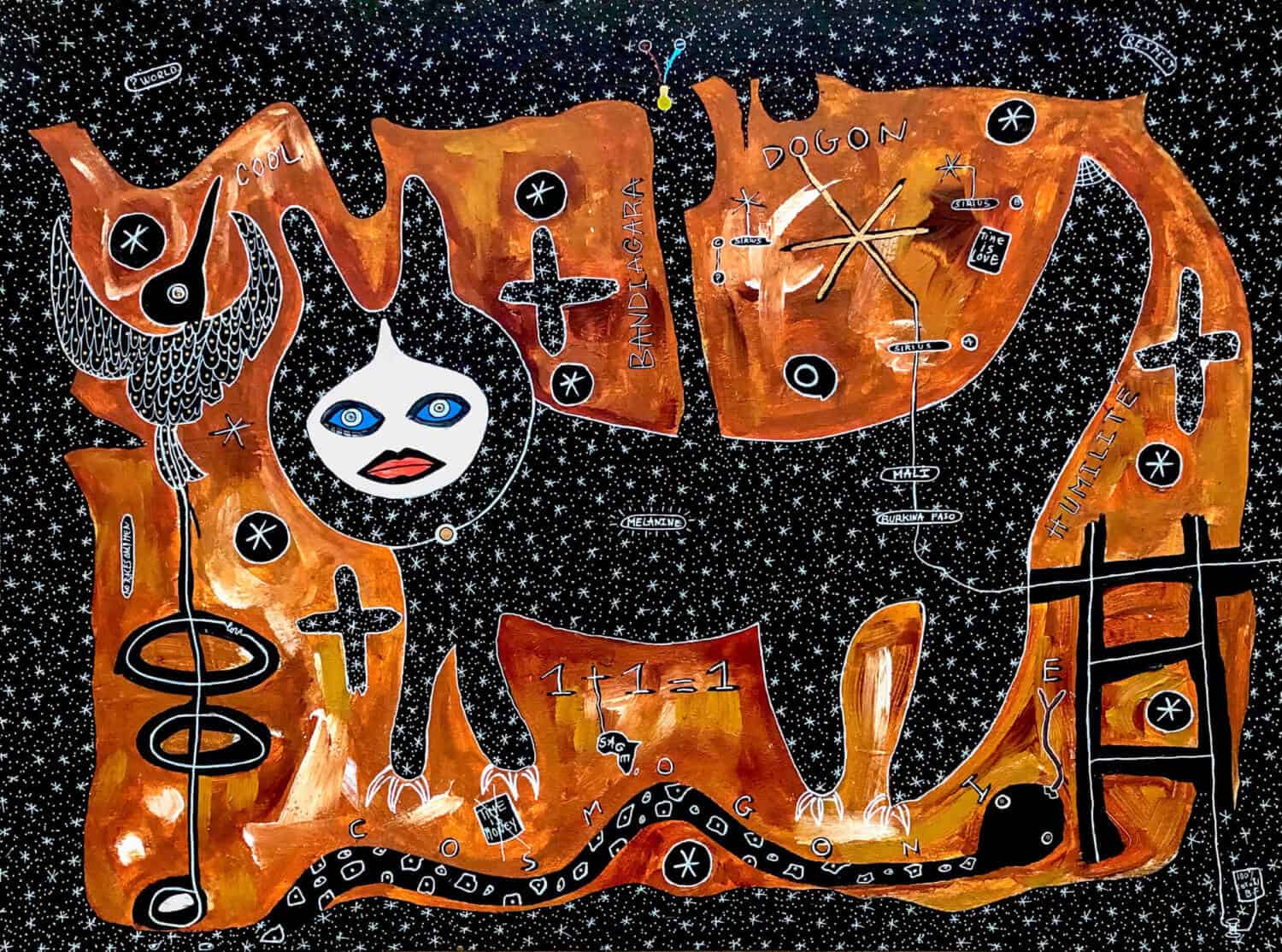 His work is unclassifiable as it breaks from the codes of fashion and current artistic trends. If he evokes Africa, he does not dedicate himself exclusively to it and the artist clearly shows his vocation for the universal with his work beyond time and space.

The construction of his paintings is original and variable, even when the technique remains the same, happily changing the gesture, the perspective, the chromatic range from one work to another.

Only its infinite Milky Way points the way of the profane in his endless search. And there is the artist, in the shadows, and he is the one who leads him by the hand!

The exhibition is on view at Out of Africa Gallery (OOA) until the 2nd of May 2021.

Sylvain Sankale is an art critis based in Dakar, Senegal.