How Simphiwe Ndzube employs the surreal in ‘Waiting for Mulungu’

Comte de Lautreamont once wrote that surrealism is “as beautiful as the chance encounter of an umbrella and a sewing machine on an operating table.” His account resonated with many of Simphiwe Ndzube’s works in his first solo show in Asia. Ndzube depicts the antics of a cast of strange headless figures in erratic spaces. Umbrellas are often featured and incorporated alongside other incongruous objects, both real and depicted, including discarded clothing sewn onto the canvas, lamp shades and traffic cones. For the LA-based South African’s exhibition, the Cc Foundation gallery was painted livid pink. The gallery is based in Shanghai’s grey M50 art zone, a cluster of renovated industrial buildings. The works combined painting, collage and assemblage. Wearing their hybridity on their sleeve, they seemed to be born of a mix of historic surrealism reaching back to Hieronymus Bosh’s nasty visions of hell, psychedelic funk, and Kwaito style. 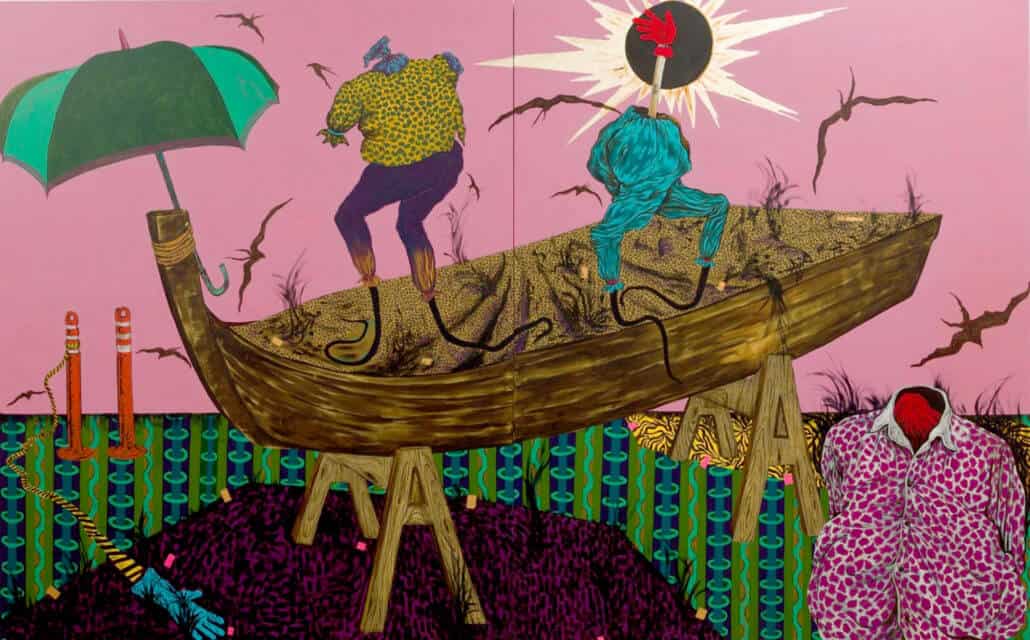 In Eclipse (2017), a large painting spreading over two canvases, headless figures clad in a wardrobe of mismatched clothing cavort on a golden boat against a rosy sky. A contrasting green umbrella is tied to the prow and black birds circle the titular solar eclipse. Another faceless character is evoked with just a pink polka dot shirt, an aloof witness, so closely in the foreground that elements of their disheveled dress spill over the canvas’ edge and into the viewers’ space. Beyond the ‘bling’ of the exuberant pallet, the jazzy lilt to the composition and the reckless cartoonish quality, a sombre mood prevails. The boat, chocked up on dry land, is redundant. The eclipse and the wheeling black birds are ominous. On closer inspection, the figures, too, appear like the dismembered cadavers in Goya’s Disasters of War. Their legs are bound tight at the ankles and end in serpentine whips, suggesting cruelty and oppression.

Similar features appear in Waiting for Mulungu 3 (2017). The boat is supplanted by a swanky red car, but it too is merely a chassis balanced on bricks. It has clearly caused a stir; three figures elatedly somersault over it. They too are without heads, and presumably, do not realize that they are going nowhere. Untitled, Levitated (2018) was an assemblage in two parts. Suspended from the ceiling, the bundle of old clothing vaguely resembles a life-size yet bloated figure. Turned gently with its own momentum above a soiled traffic cone, it rests on a similarly grimy wooden pallet upon the floor. Without a recognizable head, the dangling object is nevertheless identified as a supine figure by a hand hanging at the end of a long white shirtsleeve and a shoe. An ostentatious parasol protruded at a jaunty angle from the ‘sculpture’. An illuminated bulb on top of the cone seemed like a warning beacon, keeping the audience at bay. In common with works on canvas, the upbeat look of haphazard bricolage camouflaged other uneasy interpretations. In this case, the limp arm and bundled bulk bore a disturbing resemblance to the dying body of Hector Pieterson, carried by Mbuyisa Makhubu in Sam Nzima’s iconic image of the June 16 Soweto uprising. 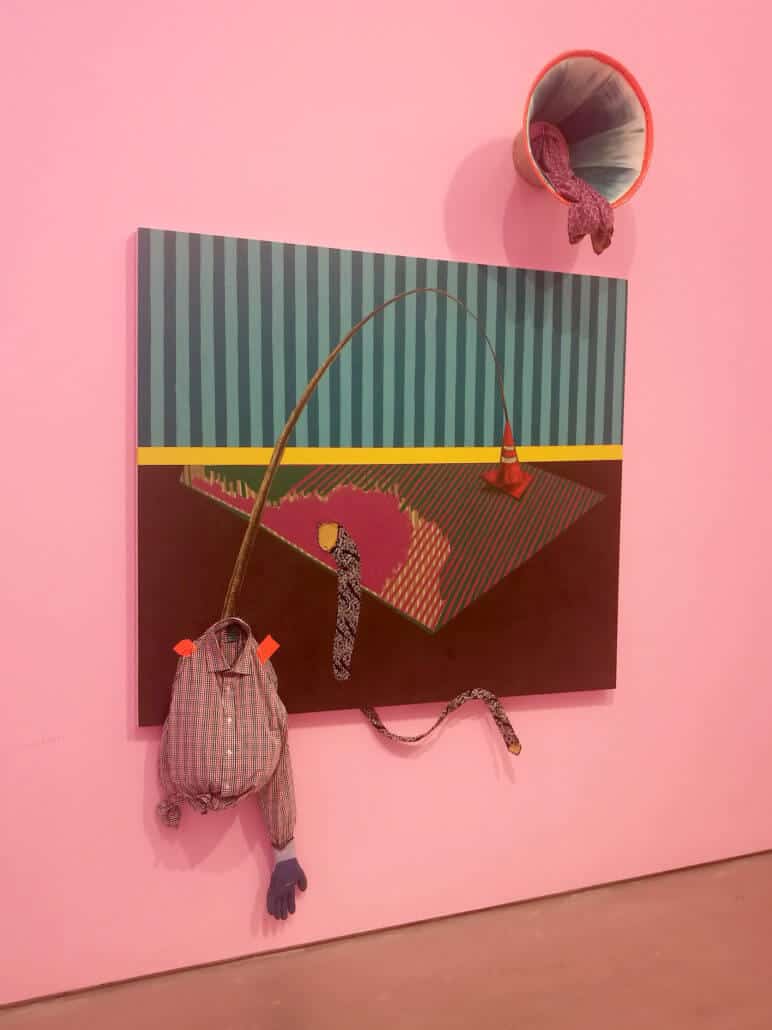 In likeness to the surrealists, who turned to absurd and fantastical symbolic imagery as a purgative answer to the gruesome folly of industrialized warfare, Ndzube employs bizarre scenarios, and the juxtaposition of incongruous elements extracted from everyday life, to respond to more recent chapters of violence and injustice. The results are both optimistic and cathartic: an eclipse is a moment of change and a lamp a sign of enlightenment. Even a traffic cone gently directs a new route.

Andrew Stooke is a freelance writer for ART AFRICA.