‘Hub in the Making’ By Dr. Zoltán Somhegyi

The art scene in the United Arab Emirates has seen unprecedented levels of growth, enstablishing this region as an important place in the global contemporary art market. This is particularly clear in the capital Abu Dhabi, as well as in Dubai and Sharjah. In just a couple of years, the UAE has become one of the must-see global art hubs. Impressive museums, galleries, art institutions and foundations are mushrooming. The scale of art commerce – gallery sales, auctions and direct studio sales – is noteworthy, however, the scene is certainly more sophisticated – and its history and development is more layered than what can be read in short Tweet-like statements. 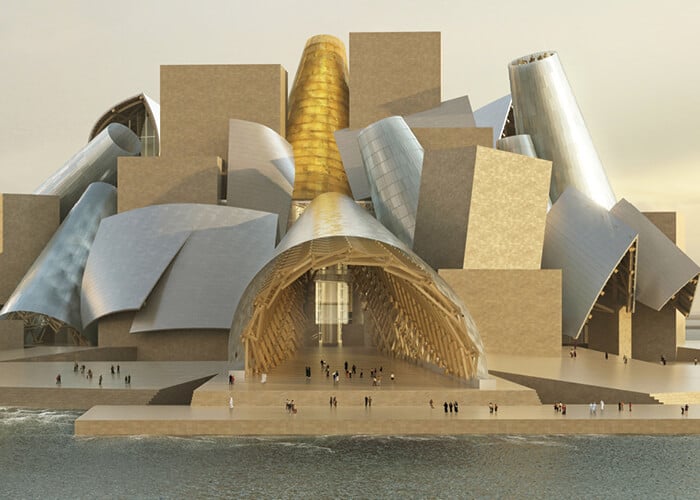 Critiques of the region often claim that the UAE-boom is centred around money. This viewpoint is too simplistic and doesn’t accurately illustrate the level and depth of current developments in the contemporary art world. Significant art centres have always tended to shift throughout the history of modern and contemporary art, and the trendsetting hubs were not always in the richest cities. Naturally, the two have often overlapped, but this is not always the case. There are many wealthy states with relatively insignificant contemporary art scenes.

What then lies behind the captivating and speedy development boom of the contemporary art scene in the United Arab Emirates? One of the reasons for this exposure comes from a general ‘Eastern’ shift in global art interests. After the long ‘Western’ hegemony, the international audience has started to open up and discover alternative, under-represented territories East of the Euro-Atlantic region. This began with the investigation of Post-Soviet countries in the 90s; the rapid emergence of Chinese and Indian contemporary art production around the Millennium, as well as the simultaneous expansion of artistic production in Turkey and Central Asia. The last decade’s focus on the MENASA (Middle East, North Africa and South Asia) region can also be interpreted as part of this general shift of attention. This is coupled with an increased global interest in Islamic religion, art and culture and their manifestation in the Arab countries and in Iran. 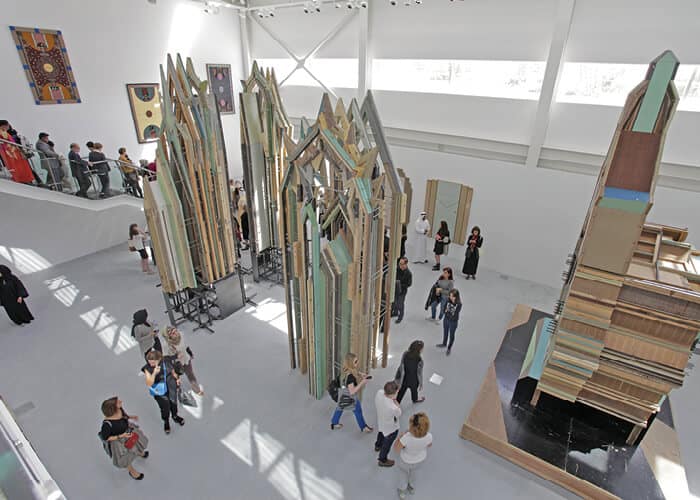 The economic power of the country and the collectors’ hunger for art production from new markets has incentivised the mapping of new territories, however without the conscious building and development of the scene itself, the aforementioned stimuli would not automatically lead to sustained growth. Strong initiatives, a favourable geopolitical location and the cosmopolitan nature of the United Arab Emirates – with about two hundred nationalities and an expat-ratio of about 80% – are also significantly helping this interest. In recent years a wide and growing focus has been generated in both contemporary and classical art. Local heritage is as much a source of analysis as global tendencies are influential.

Many art enterprises are backed by the government, as well as by private and state foundations. Corporate collections are rapidly growing. This is always a very clear indication of a healthy artistic environment because companies’ and private collectors’ investments complement the museum acquisitions very well. What is also noteworthy in the case of such purchases is that − unlike museums, where there is often an attempt toward unbiased universality in their collections − companies and private collectors can have a particular strategy and emphasis in building their art collections that provides a great ‘playground’ for innovative curators when proposing a special focus for the selection procedure. 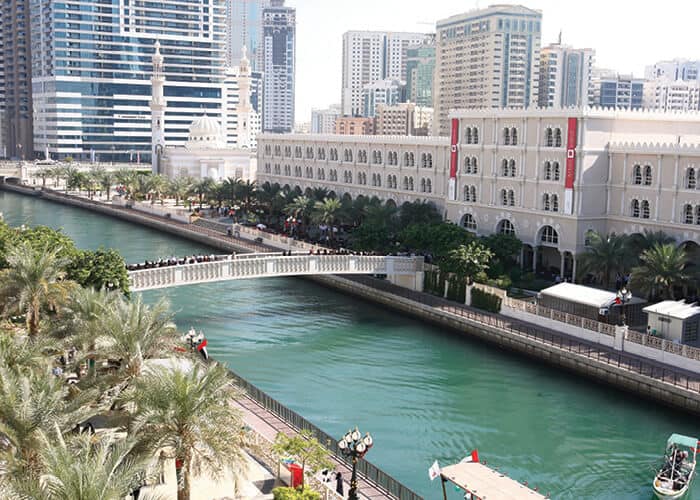 Connected to all this, another phenomenon that can’t be overestimated is the United Arab Emirates’ artistic and cultural diversity. Global discourse often views the country in a homogenised way. It is worth observing the important variety and distinctive focus points of the different emirates, all of whom contribute in making up an attractive cultural environment. The capital Abu Dhabi is regularly breaking the cultural headlines with its efforts to establish a breathtaking museum scene in the Saadiyat Cultural District. Here the Zayed National Museum (designed by Norman Foster), Louvre Abu Dhabi (designed by Jean Nouvel), Guggenheim Abu Dhabi (designed by Frank Gehry), the Performing Arts Centre (designed by Zaha Hadid) and the Maritime Museum (designed by Tadao Ando) are planned to open in the coming years. The inauguration of these institutes will certainly transform Abu Dhabi into a significant global museum destination.

Dubai is better known for its commercial galleries. At present there are close to a hundred located in different parts of the city. Many of them are grouped in two distinct areas: the DIFC (Dubai International Financial Centre) and Alserkal Avenue. While the first is an elegant commercial centre where banks, insurance companies and legal consultancies have their offices, the latter was originally an industrial zone. Some years ago pioneering galleries started to sprout up there. Eventually, due to the area’s popularity, it needed an extension. Apart from those galleries that have their primary base there, it is also host to multiple local subsidiaries of international galleries, such as Leila Heller (New York), Galerie El Marsa (Tunis), and Ayyam Gallery (with another space in the DIFC and Beirut). Visitors to Alserkal Avenue can also enjoy other events: presentations, urban markets and festivals. Both Dubai and Abu Dhabi have significant art fairs too. In March 2016 Art Dubai has its tenth edition, while Abu Dhabi Art is preparing for the 8th edition inNovember 2016. Those interested in design can enjoy different fairs and special events that complement the fine art fairs in the recently inaugurated Dubai Design District. 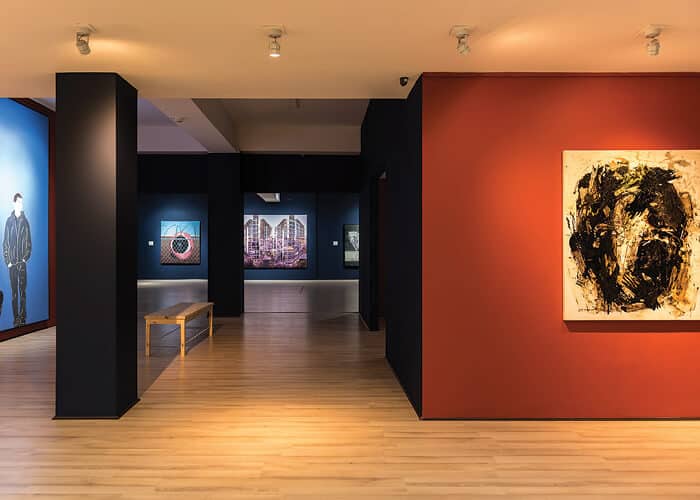 Sharjah is also particularly active in art and culture, but with a very different profile. Here the focus is not on mega-museums or the growing number of for-profit galleries, rather on the strong network of museums and progressive exhibition spaces of contemporary art. Sharjah Museums Department comprises of close to twenty institutions, concentrating on all aspects of culture, art, heritage, nature and innovation. Apart from these museums, the recently enlarged spaces of Sharjah Art Foundation are also impressive venues. Regularly organised exhibitions of high-end international artists, UAE-based masters and emerging talents are accompanied by informative catalogues, conferences and tours. The President and Director of the Foundation, Sheikha Hoor Al Qasimi is also directing the Sharjah Biennale, one of the leading events of its kind. Still in Sharjah, Maraya Art Centre is also very popular, with shows dedicated to contemporary art anddesign − a focus on this latter is in their newly opened institute, the 1971 Design Space on the Flag Island in Sharjah. In addition, the Maraya Art Centre hosts the Barjeel Art Foundation whose main aim is to manage and exhibit the private collection of Sultan Sooud Al Qassemi, one of the largest collections of contemporary Arab art.

The art scene in the UAE is much more diverse than it might seem at first glance. Besides the aforementioned three emirates the other four (Ras Al Khaimah, Fujairah, Ajman and Umm al Quwain) also contribute with artistic, cultural and musical events. The most inspiring feature is this multifaceted approach. As a result, the emirates complement one another’s offerings, and the art-lovers, both those living in the UAE or those visiting, can only benefit from this inspiring variety.

Dr. Zoltán Somhegyi is a Hungarian art historian, holding a Ph.D. in aesthetics. Based in the United Arab Emirates and teaching at the University of Sharjah, he is the Middle East Editor-at-Large of ART AFRICA.