Some meditations on the inquiring beauty of Adejoke Tugbiyele’s art

Looking at Adejoke Tugbiyele’s work, I found myself enchanted by the inquiring beauty of her sculptures, whose visual character and subject matter are also evident in her drawings, prints and photographic stills of her performance (shot by Clint Strydom). These artworks are in two, and three-dimensional forms displayed as sculptural installations and presented as performance pieces. Made of various materials including wire, natural fibres, wood and fabric. South Africa is fortunate to see them in Tugbiyele’s latest exhibition, ‘Hybrid Spirit’, curated by Ruzy Rusike at The Melrose Gallery in Johannesburg. 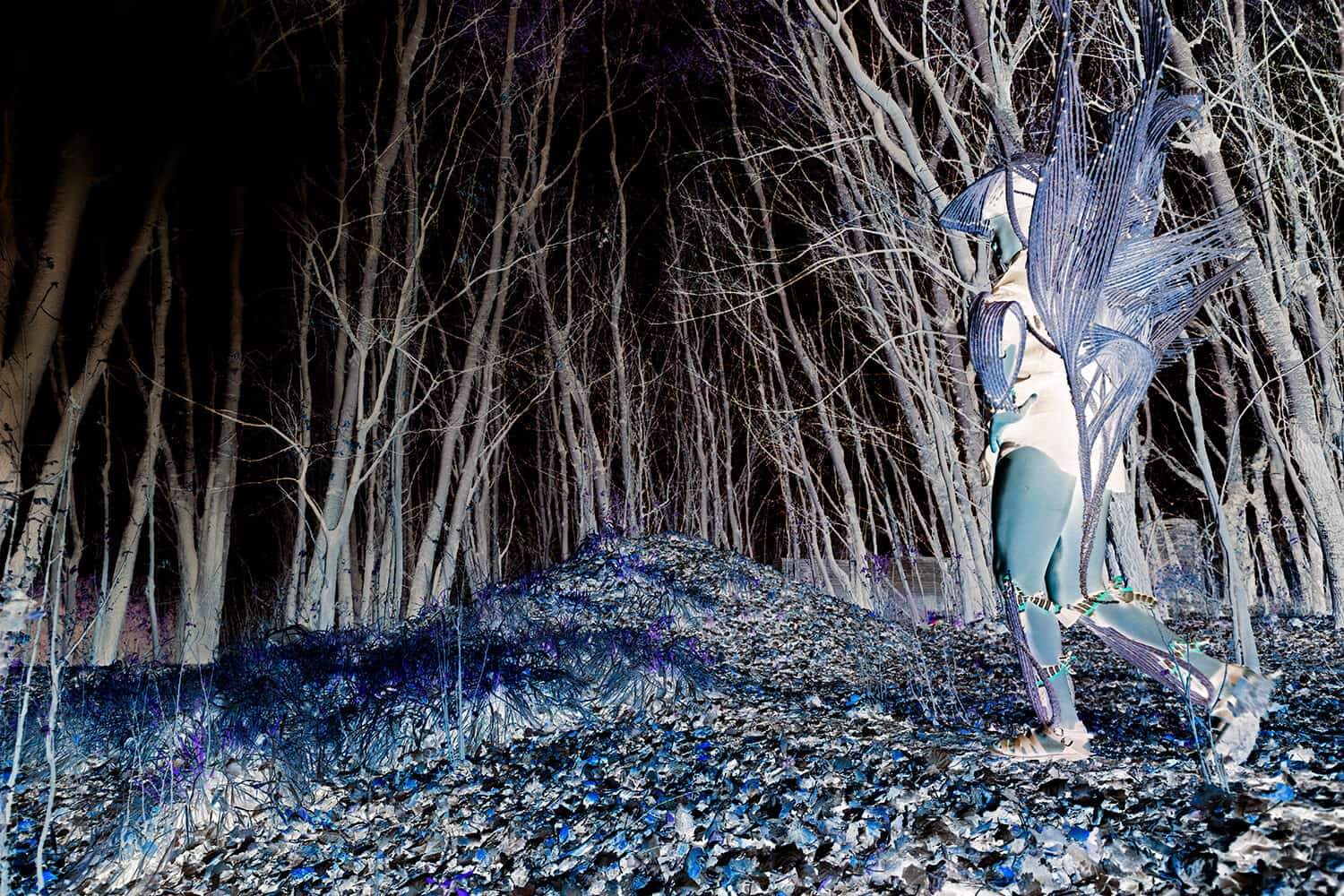 The curated artworks in this exhibition are an extended inquiry of Tugbiyele, her personal and creative investigation into identity and body politics, more so the constricting though prescriptive and imposed boundaries on gender and sexuality, including race, class, culture, religion, heritage, family, community. So disconcerting about these problematics is their simultaneously limited and limiting our understanding and appreciation of human complexities and differences. They are equally implicated in the ongoing struggle for freedom, love, respect, happiness, dignity.

What enchants me most about the beauty of Tugbiyele’s art is the creative way in which she engages contentious and sensitive politics. I am moved by the aesthetic resolve of her artistic quest whose investment is not in elegiac production but in a contemplative discourse, one which is imaginatively reflective and visually nourishing. Just look at the creative rendition of visual qualities, the thoughtful manipulation of mediums, and the careful treatment of materials that dispense exquisite shapes and quiet meanings in her varying artworks. So fascinating is the visual fabric of the composition designs of artworks and the architectural structures of the portrayed subjects. Not only do I see but also feel the rhythms and vibrations and melodies in the creative manner in which Tugbiyele manifests wealthy through subtle meanings, nuanced messages.

My work is rooted in ideas of transformation – drawings, mixed media, sculpture and video that evoke the spirit of freedom regardless of one’s identity – race, gender, sexuality, spirituality and class. – Adejoke Tugbiyele

Suppose here I am indulging in Tugbiyele’s innovative mode. In that case, that owes to her splendid rendering of form and insightful delivery of meaning in and through works of art that come to life as beautiful, probing hybrid figures. Some of these figures are intricate, others delicate, and some are curiously strange. Still, nevertheless, they all varyingly demonstrate not only the artist’s technical skill and incredible imagination in handling form and articulating the complex connotations permeating her work. They also bring to effect aesthetic configurations whose visuality dispenses pleasurable effect, satisfying sermons. 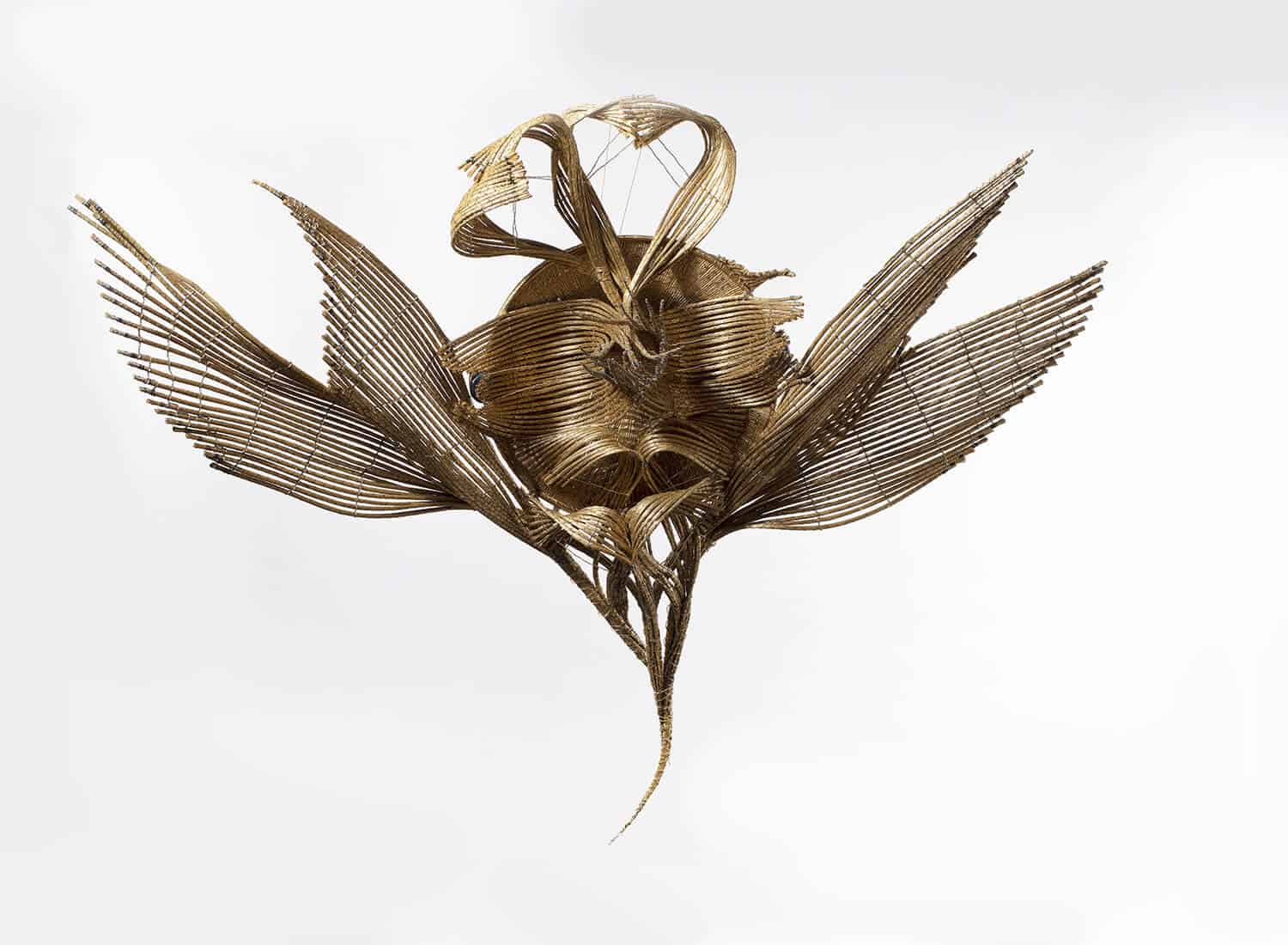 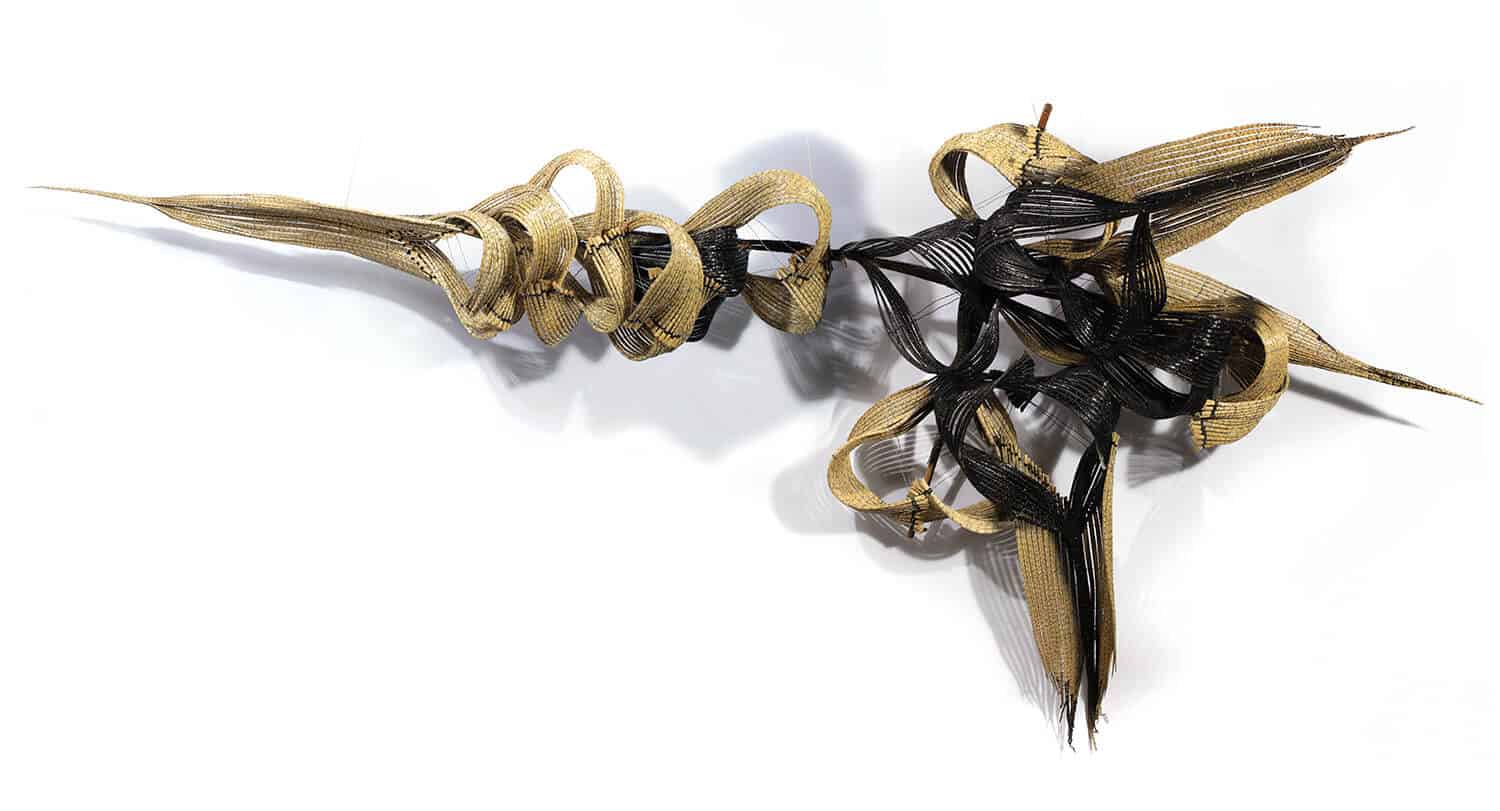 At the core of these hybrid configurations are two quintessential references, church sticks and grass brooms, which Tugbiyele has reimagined. Employed as the spine of her sculptures, the church sticks serve as supportive elements comparable to human and animal bodies. At the same time, they speak to religious institutions, structures, practices, beliefs and values implicated in how families, communities and individuals are orientated, organised, programmed and operate in modern societies. The mixing of such (western) religious phenomena with indigenous cultures and traditional cosmologies have given rise to a set of conflicts and tensions within (non-western) families and communities, particularly in the context wherein individuals have sought to claim their liberating choices of being and becoming non-heteronormative in the world.

Traditional grass brooms, commonly known for sweeping and cleaning, are repurposed by Tugbiyele. As with the church sticks, she reimagines the customary meaning and use of such an indigenous broom’s domicile functions, socio-cultural inferences, spiritual connotations and aesthetic implications. For her, I suppose, the varying connotations of traditional brooms speak to their complexity which is understood as more than the archetypical device of cleanliness, cleansing and purification of undesirable, toxic energies. Other significances pertain to healthiness, fortune, reverence, conviviality, religion and politics that are esteemed in different cultural worlds.

Take Xhosa speaking Africans who, in the eastern part of South Africa, consider grass brooms as a traditional wedding gift, protective talisman against lightning and protective medicine. In Canada, Métis people have a broom dancing tradition. In contrast, some African American weddings perform the traditional ritual of jumping the broom whose origin not just is traceable to slavery in the ninetieth century but also to earlier centuries in Britain and Wales. Monks and Nuns, during observing rituals, are said to use miniature brooms to remove small animals, and insects like ants to avoid trouncing them. The waving of traditional brooms during elections is a common practice in modern Indian and contemporary Nigerian. There is also the magic broom or broomstick in the context of witchcraft and fantasy fiction, where people fly on brooms as means of transportation and during play in the sky. 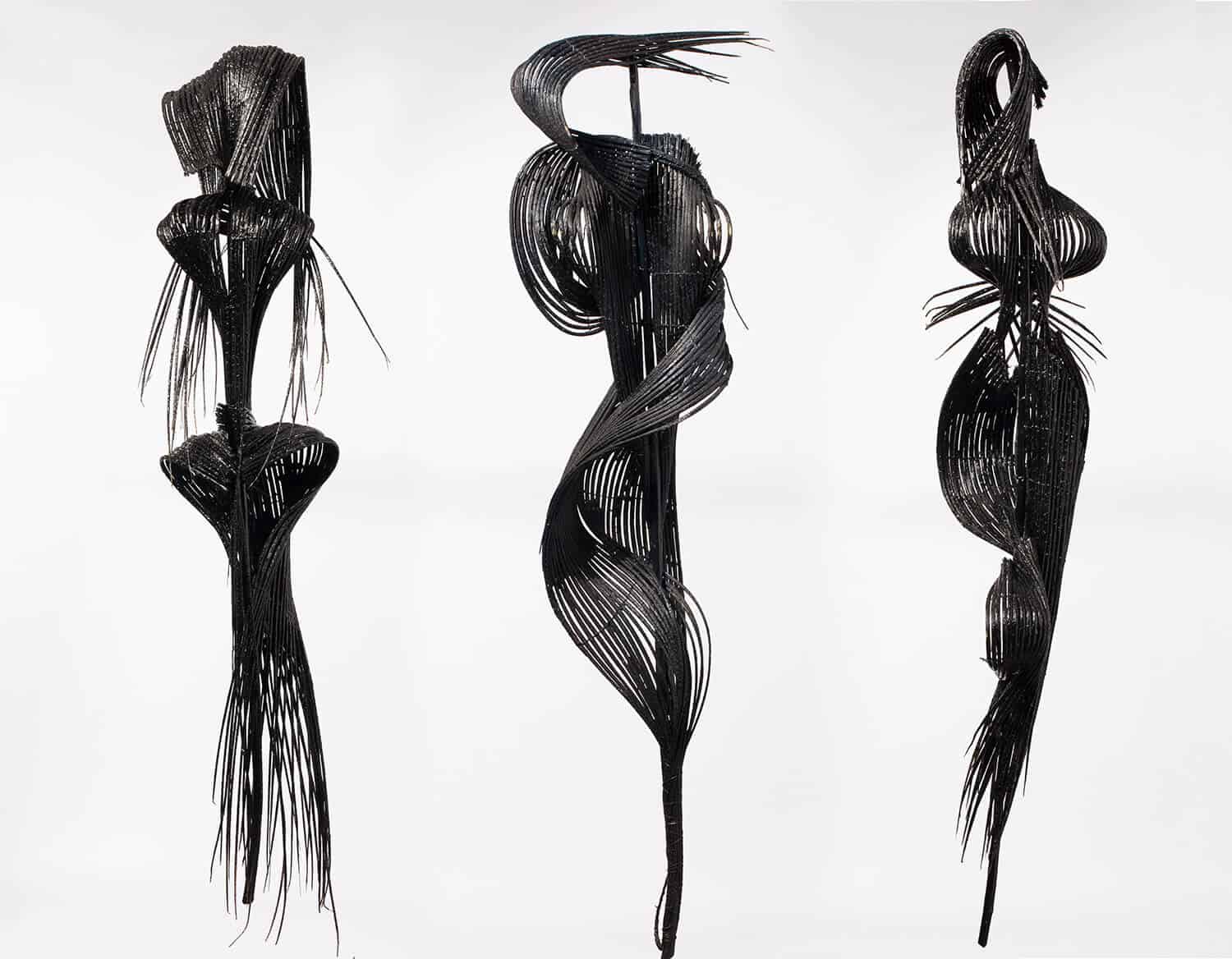 Evident about the traditional grass brooms is their universality, one which is a crucial attribute to the ethos, artworks and aspirations of Tugbiyele. Her quest and advocacy are the destabilisation, transgression and opening up of identity and bodily boundaries. Thus her repurposing of the traditional grass brooms into works of art that are indicative of transformative acts in changing a phenomenon from one state to another. Both the grass broom and church sticks, in Tugbiyele’s work, are serviceable to the efficacy of hybrid (if not multiple) forms – whose contemporary visual incarnations as representational metaphors or discursive idioms are important for our understanding of the complexity of identity and bodily subjectivities, not to mention the subtle, nuanced and more so porous and unruly agencies of human identities and bodies.

...’Hybrid Spirit’ is an act of articulating liberatory politics, a commitment to creating works of art that are not merely reactionary to the alienating and disempowering society…

To name her exhibition ‘Hybrid Spirit’ is an act of articulating liberatory politics, a commitment to creating works of art that are not merely reactionary to the alienating and disempowering society dominated by cis-heteronormative practices, values, attitudes. But also are a means of articulating and expressing those sensibilities and ideals that are proscribed, those experiences and desires that are refused visibility, recognition, respect, appreciation, legitimacy in conservative socio-cultural milieus. Referred to here are those meanings and modes of being and becoming that is always wrestling with what it means not to be seen and not to be valued. But notwithstanding that they possess the radical potential for a better understanding and appreciation of complex and nuanced identities and bodies, more so that wakes and sensitivity to gender and sexual differences in the ongoing contested definition of being and becoming human in society.

The visual objects and performative gestures that we see in the drawings, prints, sculptures, photographs and videos of Tugbiyele reference the intricate, subtle and nuanced, if ambivalent and ambiguous, sense of human differences, diversities, multiplicities. They are irreducible to singular, homogeneous and monolith identity and body that are defined by gender, sex, race, class, culture, religion, heritage, family, community. The ambiguous though the aesthetically enthralling character of Tugbiyele’s hybrid figures are visually telling of such irreducibility of human identities and bodies, whilst expressing or articulating the hybrid nature of humans. As the artist has explained how hybridity sheds awareness “of the two-spirit nature of humans and therefore the potential ability to tap into different energies, spontaneously”, whilst also “presenting alternative forms of expression that can be universally understood”. Hybridity is a mixture of different species articulating multiple registers of the fabrication of novel transcultural phenomena. Two-fold in complexity; they are more and compounded folds. 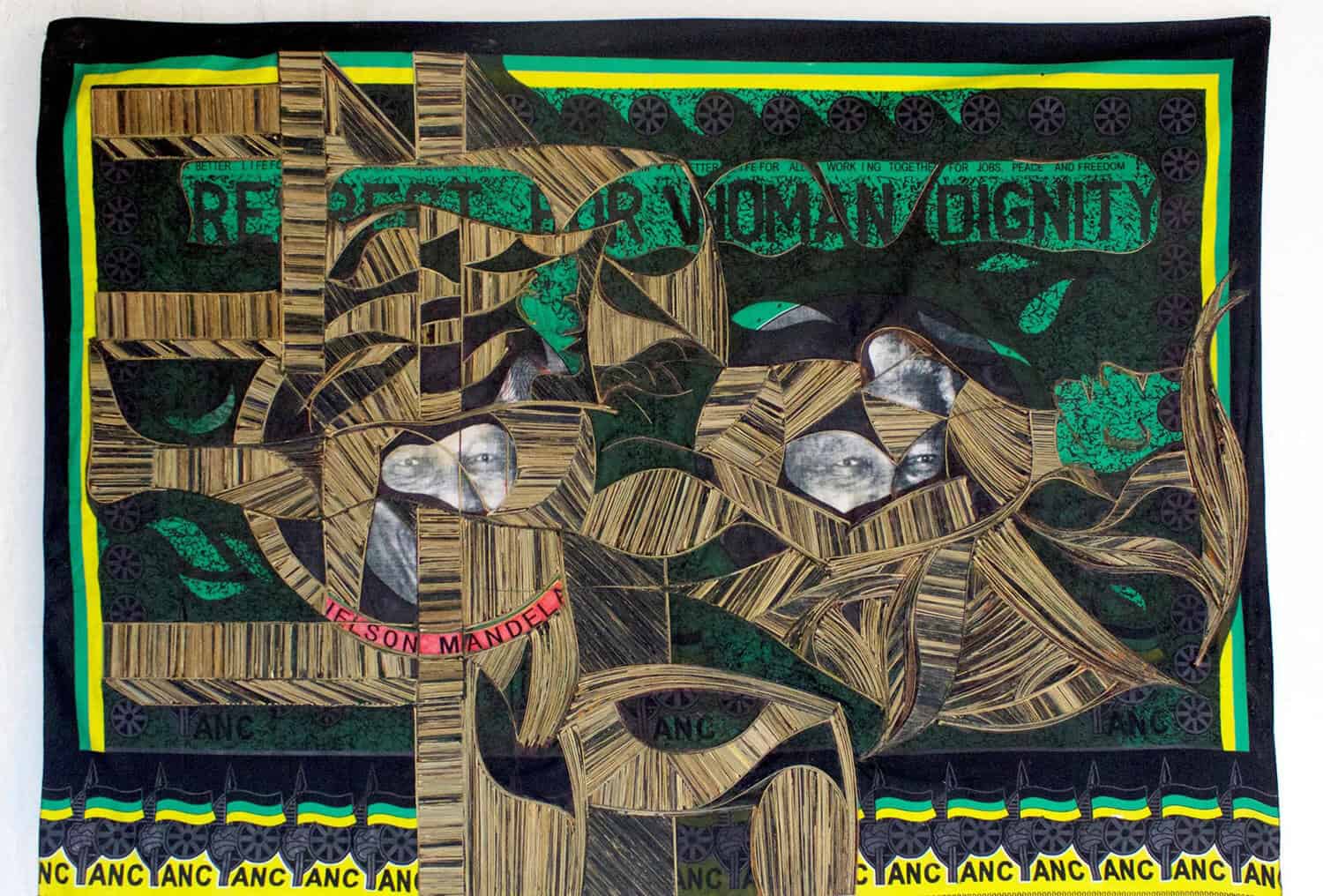 Tugbiyele’s meditation on hybridity relates to the notion of androgyny. The implied intersection or mixing of masculine and feminine qualities produce ambiguity. The point I am making here is the significance of non-binary identification, if not a repudiation of the simultaneously limited and limiting boundaries of identity and body politics. This particular discourse of intersecting novel configurations in most of Tugbiyele’s artworks, be they the juxtapositions between natural and human-made objects or the combination of human and animal characteristics, evident in her approach to making and the physical forms that manifest in many of her works. It is, in fact, the actual DNA of her artistic quest, visual trajectory, that advances her oeuvre. The complexity of Tugbiyele’s ‘Hybrid Spirit’ is compounded by interdisciplinarity, hybridity and androgyny – among many other enabling concepts – with which to frame, analyse and appreciate.

‘Hybrid Spirit’ is a beautiful discourse intent on opening up the possibilities of thinking differently and futuristic. It is a creative project which, on one level, undertakes to disrupt any conception of singular, pure, unified, and homogeneous subject-hood; whilst on another, it espouses plurality, diversity, heterogeneity of being and becoming differentiated subjects, if not differential humans, who are woke, sensitive, caring in our contemporary society. It does so in various incarnations and registers, one of which is worth noting as a way of conclusion.

I am thinking of the intersectional play of the performative and the embodiment, evident in the occasions when Tugbiyele performs her thoughts, experiences and desires. We observe this in her performances: some in the form of carrying on her back and wrapping herself with her delicate sculptures; in others, she wears them as a costume; there are also instances when she performs with the actual traditional grass brooms. These varying performances activate and motion the sculptural objects; equally, they perform the body, perform the psyche, perform the Soul or Spirit. In so doing, they enact visions of new possibilities, what Tugbiyele would explain as the break of new dawn through transformative acts intended for the reawakening of Spirit and reclaiming interior territory.

Thembinkosi Goniwe is an artist and art historian, lecturing at Rhodes University and a research associate at the Wits School of Art.