‘I Invented Myself:’ Walter Battiss at the Wits Art Museum, Johannesburg

Upon walking into the exhibition, you are welcomed by a collection of landscape paintings and a curiosity in rock art, a quirky installation of work conceived in response to censorship and an intimate curating of wood cut prints at the basement of the Wits Art Museum. Amongst other artworks, pamphlets, catalogues, photographs and memorabilia, the installation forms part of Walter Battiss’ retrospective exhibition: ‘I Invented Myself ’ curated by Warren Siebrits of the Jack Ginsberg Collection. 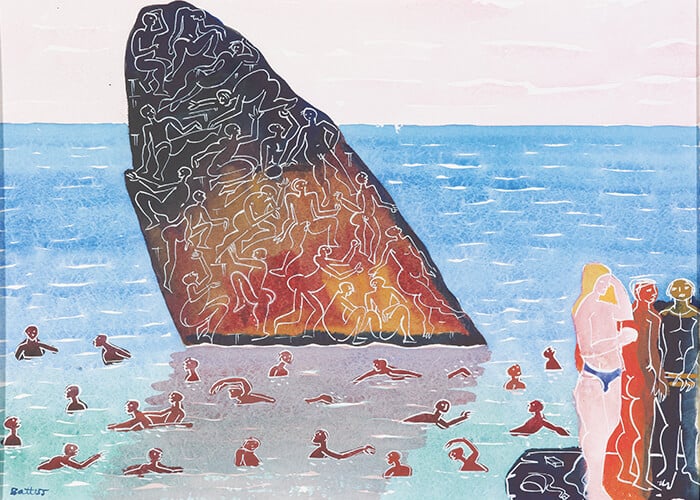 ‘I Invented Myself ’ is an anthology of Battiss’ influences, artistic oeuvre and an allegory of growth from his formative years as an art enthusiast at Wits University in the early 1930s to his days as the ambassador of ‘Fook Island:’ a materialisation of his ideas and fantasies for which he created a map, residents, currency, plants, and animals in the early 1980s.

Apart from the many examples which colour his artistic repertoire, what is noticeable, and perhaps worth briefly discussing is what the artworks seem to reveal about his ideas and the extent to which he was willing to go in order to realise them. This collection reflects a desire, if not a necessity, to break the mould in which the illusions of our times are cast and to examine himself along with his motives with artistic verve and sincerity. Battiss reveals this yearning in one of the exhibition catalogues on display titled On Fragments Of Africa: “Finding these things [fragments of African culture] and selfishly possessing them changed me. All this was my peculiar discovery but I had no desire to paint an anecdote about them, but rather to make pictures of them in such a way that I expose the happy change they had worked within me. Yes, I made and want to make pictures which are of a colour language of the haphazard experience of my African existence. These I call fragments of Africa, but they are also fragments of myself.”

Battiss’ declaration recalls existentialist principles which suggest that with the fragmentation of his experiences and the impossibilities of finding support in the world around you, the individual is now tasked to find answers within. Much like abstract art, which was partly conceived as a utopia for the European artist who no longer found comfort in his surroundings, Battiss found an outlet in developing his own means of communication, sought to find refuse in the confines of his mind, and eventually conceived of his Utopia: Fook Island. 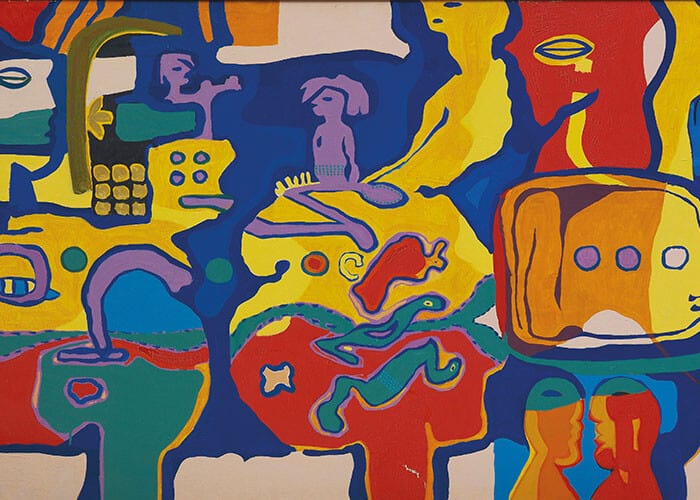 Fook Island was his ideal resort; a world free of censorship, unburdened by the troubles of apartheid South Africa and unaffected by global economies. Existentialism holds dear the premise that an individual is the sum of his thoughts and actions, even if those may lead to solipsism, the belief that an individual and his subjective experiences are the only existing reality, and that all around him are fragments of his subjective experience.

In spite of its seductive possibilities, it is also worth commenting on the shortcomings of reducing the nuances of censorship to themes of erotica, more so in a country, or at a time, where censorship meant the forbidding of same sex marriages, inter-racial relations and the policing of individual and collective ideals. Works such as Orgy II, which is comprised of nine brightly coloured, abstracted figures having intercourse leads us to avenues of a contentious reading. One such reading is a running critique on the absurdity of what was then condemned as an immorality act, a law which prohibited, amongst other things, sexual relations between white people and those of other races. 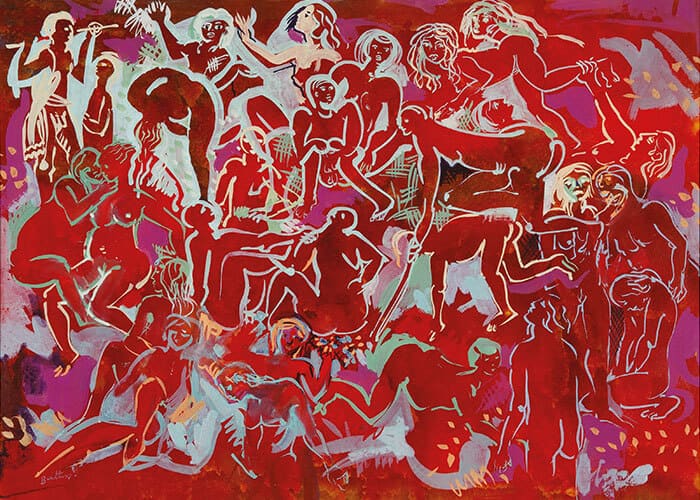 Consequently, such an aesthetic register scarcely offers insight into the fabric of what becomes of the person whose necessity to seek and find love is being suppressed. At times, artworks centred on themes of erotica run the risk of producing images of sex without intimacy, lust without guilt or sin without consequence. In this body of work the viewer is left unaware of both the frustrations that come with censorship and the deep sigh of relief that one gets in knowing that we are no longer bound by the limitations of our social norms. We do not get to see or feel what Alice Walker once described as “a special grief felt by the children and grandchildren of those who were forbidden to explore, forbidden to question or to know.” In a sense, human qualities are often brushed aside in favour of the sexual and the exotic.

However, Fook Island is not proposed as a resort for those with high moral fabric. It is not a sanctuary where all can be resolved or where one can start afresh. Rather, it is an account of an individual whose artistic ambition is to explore the uncreated conscience of his imagination and see if he can convince you to permanently relocate.

’I Invented Myself’ will be on show at the Wits Art Museum, Johannesburg until 9 October 2016. This article was first published in the September 2016 edition of ART AFRICA magazine.