‘I know why the rebel sings’ by Laura Parry-Davies

In the March issue of ART AFRICA, titled ‘Looking Further North,’ Laura Parry-Davies takes a look at the current exhibition by Newsha Tavakolian, ‘i know why the rebel sings,’ at the Prince Claus Fund Gallery in Amsterdam. 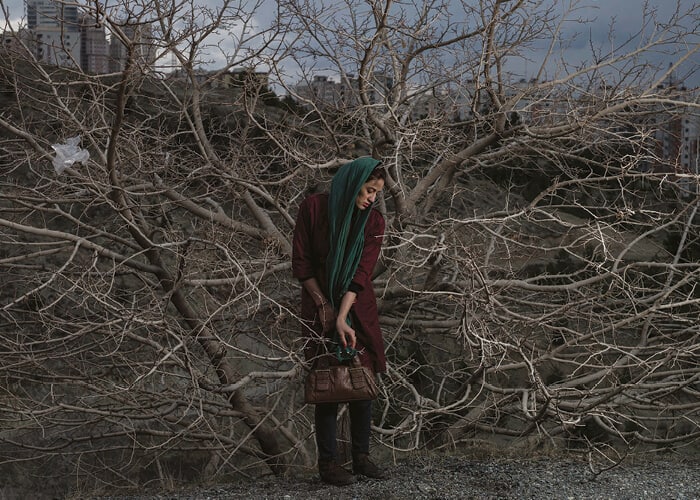 Newsha Tavakolian, Portrait of Somayeh, a divorced teacher from Tehran, 2014, as featured in ‘Blank Pages of an Iranian Photo Album’ series. All images courtesy of the Prince Claus Fund.

Nestled among towering buildings and a maze of Amsterdam canals, a small plaque on an ancient building welcomes you to the Prince Claus Fund Gallery. In a city bustling with distractions, this unassuming space is easily overlooked by the undiscerning eye – a fitting metaphor for what currently lies within.

‘i know why the rebel sings,’ is a solo exhibition by Iranian photojournalist Newsha Tavakolian (Principal Prince Claus Award winner 2015) that marries Tavakolian’s photojournalistic training with her artistic eye and penchant for layered details. Through her multiple studies of contemporary life in Iran and the Middle East, Tavakolian takes us on a journey from the familiarity of the everyday into the horrors and bloody portraits of modern war zones.

Each picture is informed by a journalistic curiosity, eloquently capturing narrative and movement, challenging the viewer to see past the obvious and into the lives, loves and struggles of the people depicted in intense and intimate ways. “I want to tell Iranians’ stories to Iranians themselves, this is where I can challenge myself to go deeper into the more complicated layers,” she explains. 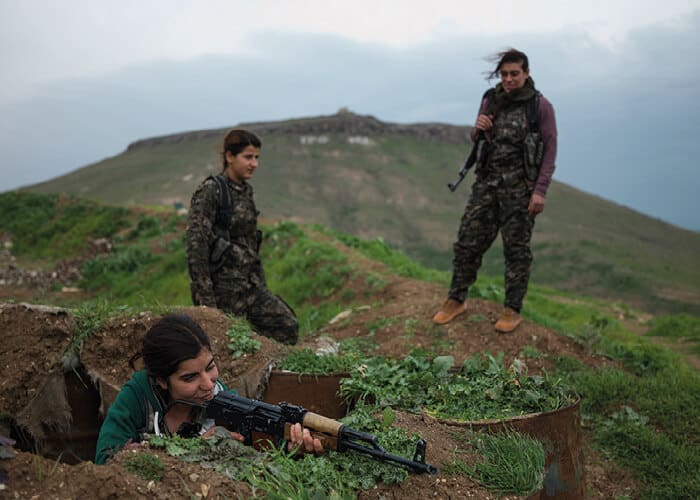 A feeling of intimacy and contemplation washes over you as you enter the exhibition space. The darkness, coupled with the heavy gazes of the immortalised figures immediately draws you into the quiet serenity of Tavakolian’s contemporary Iran.

Bird song drifts across the airwaves, a man stares up out at the viewer from a mass of concrete puddles. Within his frame, the camera gently tilts backwards and forwards; affording us tantalising glimpses of equally bleak surroundings…a plastic bag drifts, unnoticed, at his feet.

Each of the posed portraits within the series ‘Blank Pages of an Iranian Photo Album’ (Tehran, 2014) hint at realities that lie just beyond the reach of Tavakolian’s lens. The staged portraits seem to compel the viewer to question and challenge their composition. Who are these people and what are they trying to tell us? The figures’unwavering stares are both unnerving and personal in their ambiguity. 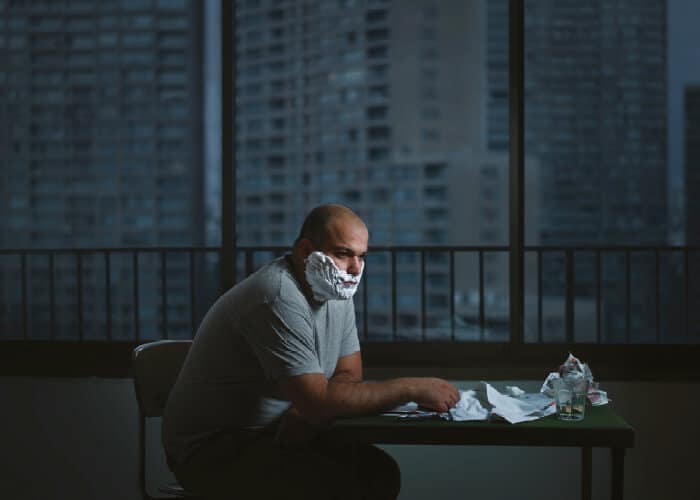 Whether depicting conflict, humanitarian tragedies or the complexities of her friends’everyday lives and dreams, Tavakolian shies away from forced dramatisation. Instead, she seeks to highlight the nuances of the human condition, walking the fine line between art and documentary, instead of seeking out the obviously dramatic or beautiful. As Tavakolian explains, “I want to show the tragedies of life without exaggerating them. From childhood, I have been moved by those who have difficulty expressing themselves, the ones who are marginalised…I am angered by injustice, by abuse of power, by the sidelining of some.”

Poetic imagery and subtle symbolism slip away as we wander past the darkened spaces of the gallery and out into the bright corridors of Tavakolian’s NGO and reporting projects. In stark contrast to her enigmatic portraits, the series ‘Freefalling in Samburu’ and ‘Accra’ delve headlong into her photojournalistic roots –both written and pictured –drawing upon human fragility and raw emotion to highlight topical issues such as female genital mutilation. The series ‘On the War Trail’ (Iraq and Syria, 2003 -2015), ‘Iran Walls’ (2009 – 2015) and ‘Maria’ (Tehran, 2007) show the extensive portfolio of her many challenging and traumatic photojournalism assignments. Through her lens, we are transported from the terror and chaos of war on the front line to images of those who are left to pick up the pieces.

Like the building they are housed in, the most vivid images in this collection are not overpowering by themselves and their meanings are not always obvious. The theme of ‘i know why the rebel sings’ implores us to look beyond the obvious, to see the thread that links it together. It challenges the viewer to see beyond social stereotypes to what the camera cannot show, like the all-too-short future of a teenage Syrian-Kurdish fighter, pictured crouched behind her gun, waiting for her enemies to emerge.