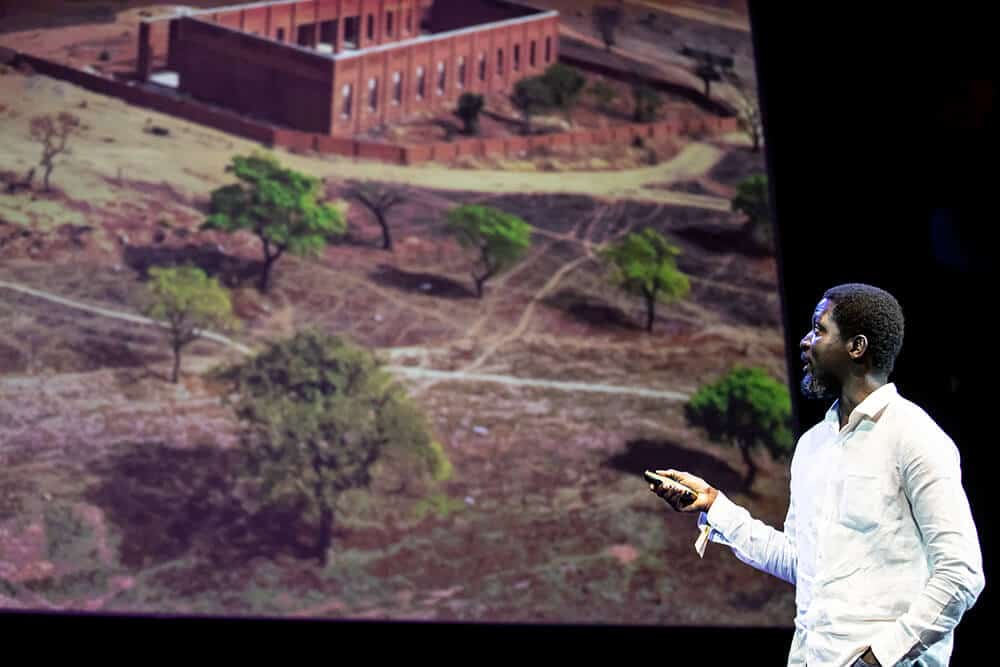 Ibrahim Mahama was born in Tamale, Ghana in 1987 where he currently lives and works. Mahama obtained a MFA in Painting and Sculpture in 2013 and a BFA in Painting in 2010 at Kwame Nkrumah University of Science and Technology, Kumasi, Ghana. His work was shown during the last 56th International Art Exhibition of the Venice Biennale in Italy All The World’s Futures curated by Okwui Enwezor in 2015. The Africa Report, a Paris-based news magazine that focuses on African politics and economics, recently named Mahama one of the 100 most influential Africans today. Mahama’s creations, like his overall practice, are socially oriented and focused on concerns such as labour, migration, globalization, and economic exchange.

ART AFRICA spoke to Mahama about his community focus and collaborative approach to making his art.

Suzette Bell-Roberts: You’re best known for your works where you use jute sacks, which are stitched together and draped over architectural structures. Your work has been acquired by international collectors and institutions, exhibited at Venice Biennale and Documenta and elsewhere. But your work is made in Africa, from repurposed and discarded objects. How does this impact on the context of the work?

Ibrahim Mahama: what typically happens with artists from the continent is that as you become more established and successful, your work is then exported to and exhibited in Western institutions and collections. The context of the work changes. The way the work is exhibited changes. The very premise of creating my work doesn’t have to do with climate or preservation as it would in a Western institution. In these museums, there is always a focus on climate control; you have to do this and that with the artwork. I’m like come on, relax because a lot of the works that I produce, they are already decayed.

In Ghana, you would never have this kind of experience, so I thought that, if I’m an artist who is interested in the transformation of space, does it also mean that I can somehow start creating spaces? There are so many great African artists, like El Anantsui, whose work is not accessible to most people on the continent. You have to travel outside of the continent to see their works. Of course, in South Africa, you have Zeitz MOCAA and Norval, and in Morocco you have MACAAL. But these museums are in more affluent and sophisticated regions, accessible to a privileged few.

You started building your institute – The Savannah Centre for Contemporary Art – in Ghana last year, tell us more about your motivation here.

I live and work in Tamale, which is the 3rd largest city to the north of Ghana. The institute has was built on land that I purchased on the outskirts of the city. There are also incredible abandoned industrial spaces in the centre of the city, like the silos and the factory which I have recently purchased. The idea is to create a multiplicity of spaces so that it almost converts the entire city into a cultural institution.

I want the locals to experience my work, to give them the same experience of viewing art, why not? There is a lot of artwork that I’ve kept that I didn’t sell, and it’s going to exist in a factory for the locals to experience. This time around at least the work is placed in context, it’s not in a museum or white cube where you have to read the text to understand the work.

It is very important to be at least able to create the work in a way that can somehow affect the perceptions within the space that you work in.

You place significant emphasis on the importance of including the local community in your practice, of sharing knowledge and social interaction

Typically, in Ghana, when anyone is done with art school, they just want to go and work in a bank or leave the art practice immediately. Then they look at what I’m doing, today one artwork and tomorrow a completely different work, and the next day I’m building something and then I’ve bought this old building which I’m converting into a cultural institution. I want to show them the complexity of the way capital works versus the things that we create as artworks, the objects, so for me, I like to go back and forth. I understand that the work is important when exhibited in a Western museum, that it has an intrinsic value. But when it’s at home, the value is different because now you’re aiming to de-commodify and decapitalize the work, make it anti-capitalistic. The projects that I do at home cannot be bought, and they cannot be sold. They are things that belong to the people; they are experienced; they are like gifts.

One of the things I’m doing is to find local patrons who can support some of these things, like creating some of these institutions and expanding the program so we can get into another kind of dialogue.

Tell us more about the physical structure of the institute. You mentioned that you had used abandoned objects to build the surrounding community centre, it all seems quite eccentric actually.

I purchased 5 old, decommissioned aeroplanes which I had towed to the community centre, as well as state-owned buses which had been scrapped. Initially, I had the idea of using planes as school rooms. We’ve repurposed the seats from the aeroplanes and the busses, about 300 in all, and used them to create seating within these social spaces as well as for the cinema. In our history, there have been a lot of post-independence era documentaries made, as well as experimental films. The idea for space is to host social events which create a conversation between that which you sit on and the building that is being created.

So within the building, you are installing the permanent The Parliament of Ghosts. Would you elaborate about this and the relationship to the installation in Manchester?

The Parliament of Ghosts that I installed in Manchester will be part of a major show I have in London later this year at the White Cube. But my dream always has been to instal The Parliament of Ghosts permanently in Ghana. So now the parliament is there within a space as part of the institution. The very foundation of the institution is about using history and the failures of history as a starting point. We have cabinets from the railways and the original sleepers that were used in the construction of the railway. I employed carpenters to research the techniques that were used 120 years ago to restore these cabinets. There are archives of over 10,000 drawings, which I reproduced from the archive of the railway. The institution will have entire rooms of archives; books, photographs, film and a library that contains political and social materials. There are artists’ notes and post-independence architectural drawings. I’ve collected discarded schoolbooks and end of year school exam papers. One of the things I’m interested in is the knowledge and the failures which exist within the pages of those books. When you go through the books, you understand what goes on in the minds of these school kids. I want to create systems out of this knowledge where these kids begin to engage with their own objects in a different way. They need to see this as part of their reality and their existence and change the way they look at the world. I think the world is changed, so for me, those things are important. These spaces that we build have real symbolic implications for us in terms of what it represents; in terms of how far we’ve come in our thinking; in terms of our ideological values and norms.

How do you get school children and the community to engage with what you’re doing, to visit the centre and participate in the events?

For now, the easiest way to do this is to involve and collaborate with academics from the Department of Painting and Sculpture at the Kwame Nkrumah University of Science and Technology, where I studied.

Our training is deeply political; the way we think about art, the form that comes with is very different from other art schools. The training and teaching received are more as Craftsman who think only about making an object to sell. So, when you think about art as a political tool, it’s very different for them to understand how that can change the form, how can art be this today and be that tomorrow. It is challenging for a lot of people to really understand and go back and forth in between it, and we try as much as possible to get the community involved in all the things we are doing gradually. It’s only been a year since I opened the institution, and we’ve done quite a lot within that year. All the spaces and things that you saw happening in the video, so imagine what happens in the next 10/ 20/30 years!