Richard Mudariki’s bold and bright painted scenes play with political satire and social commentary. Exhibiting with Barnard, Mudariki is at once, both an artist and political commentator – intuitively documenting South Africa’s sensational history.

ART AFRICA: Your paintings represent iconic history, personal experiences and the leaders of global nations. How would you describe your relationship with politics, and why is it important for you to portray these – often contentious – figures in your work?

Richard Mudariki: My relationship with politics is in a way non-linear, it is multidimensional and multi-faceted. I see politics as the complex relationship between a group of people – one that extends beyond state politics and stretches to include power relationships in a community, a company, a family, a school, a profession etc. My work attempts to interpret this interplay among individuals in groups at a specific period in time – at times seeing it as a game, where the different characters in the game try to influence one another or attempt to influence the majority so as to exercise their power.  If you look at paintings such as Business and Pleasure (2013) and Economies of Scale (2017) they highlight the politics of business and commerce, while The Passover (2011) is a linear view of politics – that of state politicians and their roles over a state. Signs of the Times (2017) is an interpretation of the politics of migration, while again paintings such as Art Dealers at Cape Town Art Fair (2015), and Connoisseurs of Contemporary Art (2014) point to the politics of the art world. My recent body of work is looking at politics in social media, and how this technological advancement has made an impact on modern society.I think that it is important that an artist engages, through his or her work, with the present moment, bringing out the ‘artistic reality’. At the same time, one can be providing a visual form of questioning, somewhat giving an independent, alternative, creative way of looking at contemporary society. The artist then becomes some sort of information gatherer, one who captures the sentiments, hopes, fears, questions and pleasures of a society, and translates such information by creating objects that embody the information for an audience to enjoy or ponder upon. Someone once said artists are like emitters of messages, but they are like broken emitters, because they emit messages that are not the common view. 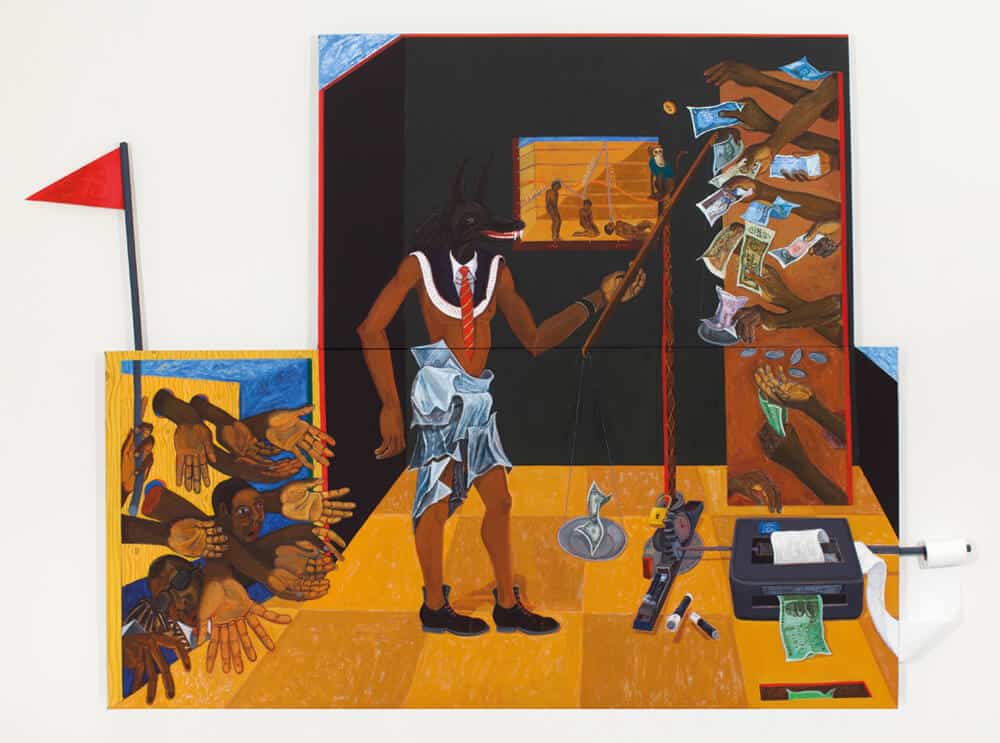 The recent change of power in your home country was met with jubilation, but it seems very little is about to change any time soon. Can we expect to see a Mudariki critique regarding this any time soon?

I do not see the recent events happening in my country of birth as change of power, but rather change in political leadership. To express it in another way, it is a situation in which a ‘snake sheds its old skin’. The new leader was a mentee of the former leader and the country still has the same political party and the same politicians. I must say that over the past 10 years my work has interpreted and engaged with the political situation in Zimbabwe and will continue to interpret these recent and future events. In a subtle way, one can say l have been protesting and calling for Robert Mugabe to step down way before 2017. In what can now be seen as a prophetic painting, Coup detat, (2013) the composition shows a coup taking place, which the president (here symbolized as a cockerel) is being removed from his ruling seat.

Cubism and German Expressionism – and artists such as Picasso and Edvard Munch – have influenced your aesthetic style. What is your relationship with these masters of European art?

As has been said, no artist lives in a vacuum. I draw ideas from culture, art history and a personal view of present day social, economic and political environment. The need is to create work that is relevant to the times we live in – and contributes to the greater conversation, which is the conversation of the entire history of art making – with special focus on the practice of painting. I look back, learn and research on how artists from previous generations contributed and the opportunity for me to continue with the narrative and conversation, especially on the African continent, which has a comparatively short art history.

Yes. My creative process is one in which l am focused on the execution of a visual composition in colour – applying the visual conventions of perspective, line, texture, colour etc. but at times also distorting these elements. I want the viewer to see and acknowledge what they are looking at is an artwork, but embodied in that piece of art is a visual idea, call it a message or a reality of world that is seen through the eyes of its creator.  So, there is somewhat a double experience – as one walks in a gallery he/she not only gets from the artworks an aesthetic, cultural experience but also an imaginative reflection of the world. 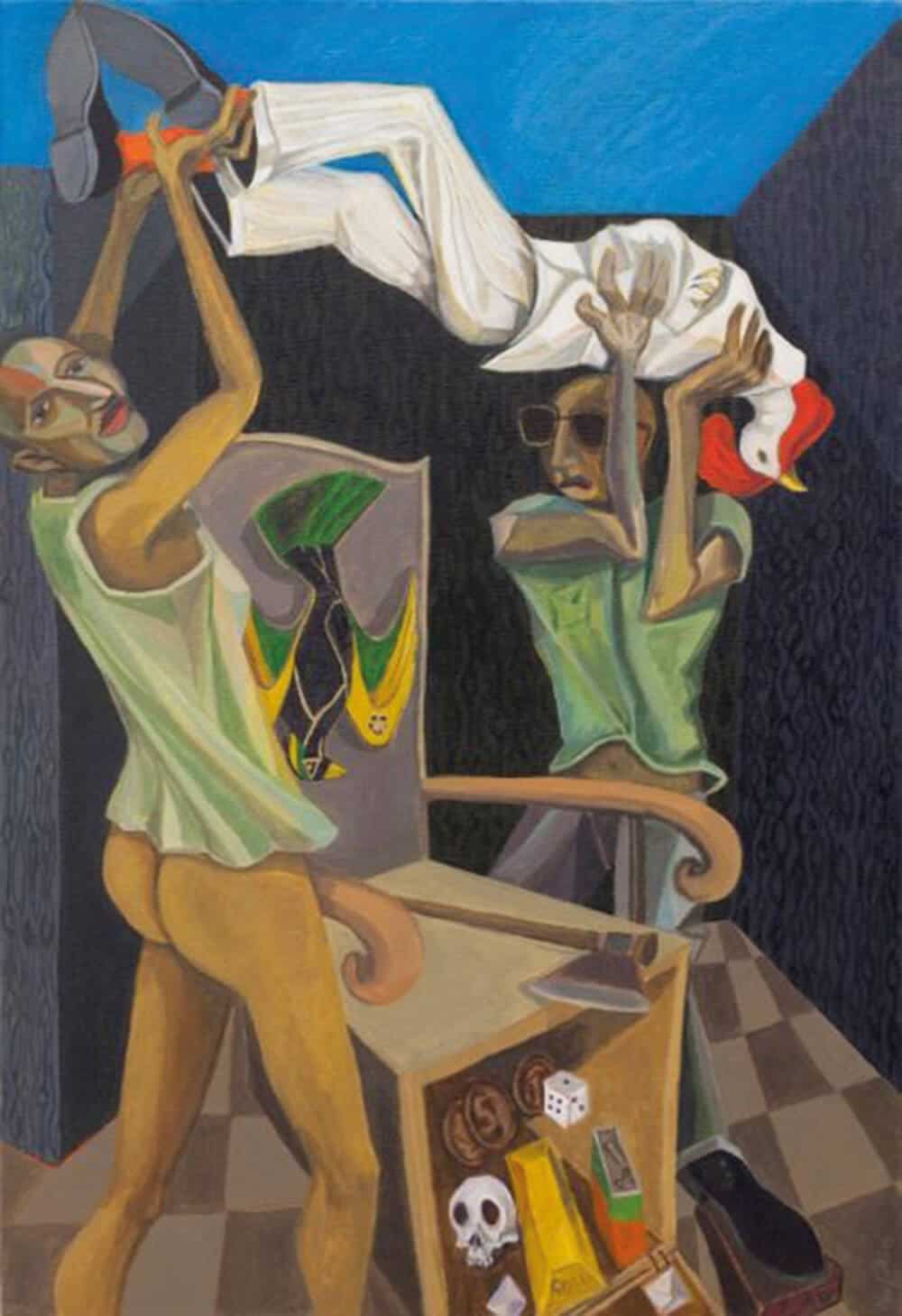 Represented by Barnard at the 2018 Investec Cape Town Art Fair, what has your experience been like exhibiting and working in South Africa?

I will be exhibiting a painting that is from my recent body of work that engages with the current topical issues of the economy. With regards to my experience of working and exhibiting in South Africa, l can say that it has been positive. I feel that in the context of the African continent, the South African art world has been much more mature and robust, despite a comparatively small but growing collector base. However, like any career, it has had its own challenges of finding and maintaining a healthy relationship with the market forces – galleries, curator, dealers and collectors.