If Not Now, When? Statues, Spaces and History in Zimbabwe

In July 2020, the Zimbabwean government decided to begin the construction of a new monument in Harare city center1, a statue to the unanimously beloved hero of the first chimurenga2, Mbuya Nehanda3.

At the same time Zimbabwe: Art, Symbols and Meaning, a major new book project focusing on the visual culture of the country, is released.

“Why now?” Is a question some posed proposing this surely cannot be a priority for a country in COVID-19 lockdown, which is reeling from political to economic breakdowns. A project, long in the works, Nehanda arrives at an interesting moment for public statues and re-appraisal of history and its erstwhile heroes. It seems more than timely for an African woman resistance hero to arise at a time when around the world statues of slave owners and colonisers are falling. In fact, it also neatly answers the assertion by the defenders of statues under attack, that taking statues of these historical figures down is an erasure of history.

History like nature abhors a vacuum. The telling of history has belonged to the victor and it omitted far more than it told.

History like nature abhors a vacuum. The telling of history has belonged to the victor and it omitted far more than it told. It omitted resistance, omitted the telling of suffering and oppression, censored and obliterated the voices which spoke uncomfortable truths, which defeat the suggestion that we are judging historical injustices by today’s exacting moral standards. 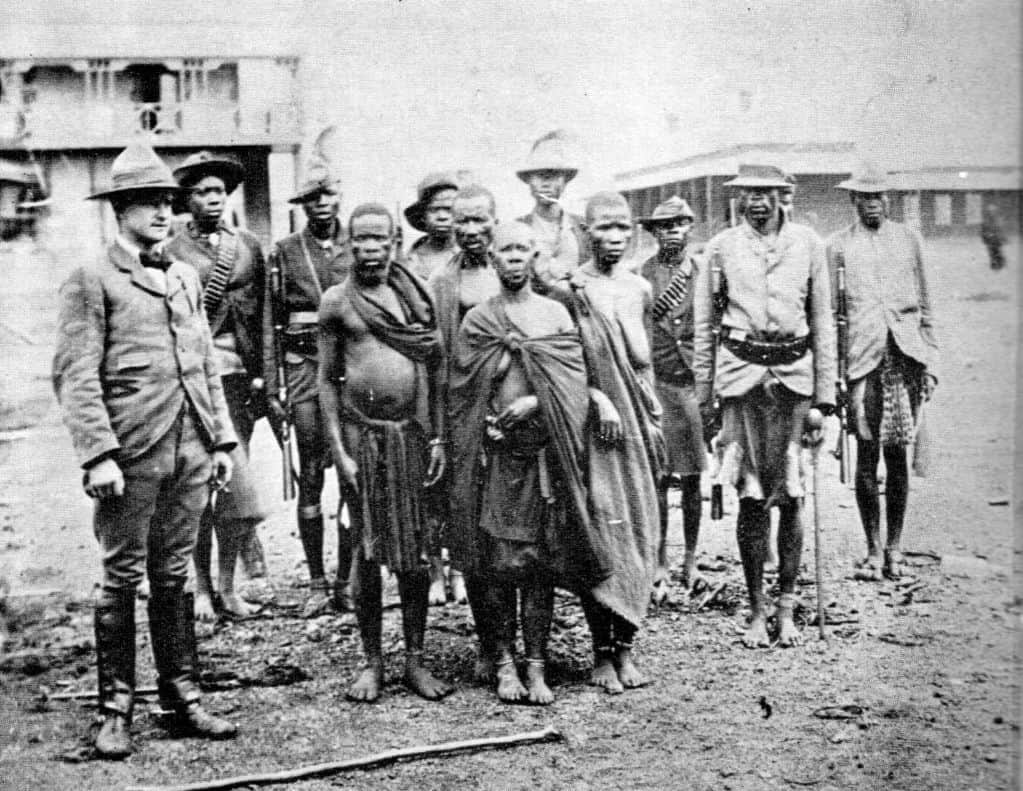 Kenan Malik in When Monuments Fall4 posits “Statues are rarely about history as such; they are about memory. That is, they are part of the process of shaping perceptions of history. That is why they have long been sites of contestation, and not just in the present.” Cancel culture in this context is far from censorship it is literally a way of making space for new stories, for untold histories for unheard voices in a world where the unitary narrative is not enough.

The space created by the removal of colonial statues is crucial, as a breathing space for conversation, reflection with self-awareness of the values that need to be projected moving forward, which speak the aspirations of people and respond to the history written by all and not just the victors.

In countries, where people of colour are a minority the social justice imperatives are pressing and urgent and rightly deserve global attention. However, in post-colonial black majority African states, the legacy of colonialism is pernicious and the process of decolonization is terse and complicated, requiring nuanced understanding, especially when it comes to culture, where culturally colonization still holds incredible sway explicitly and implicitly, despite an extraordinary and successful liberation struggle. 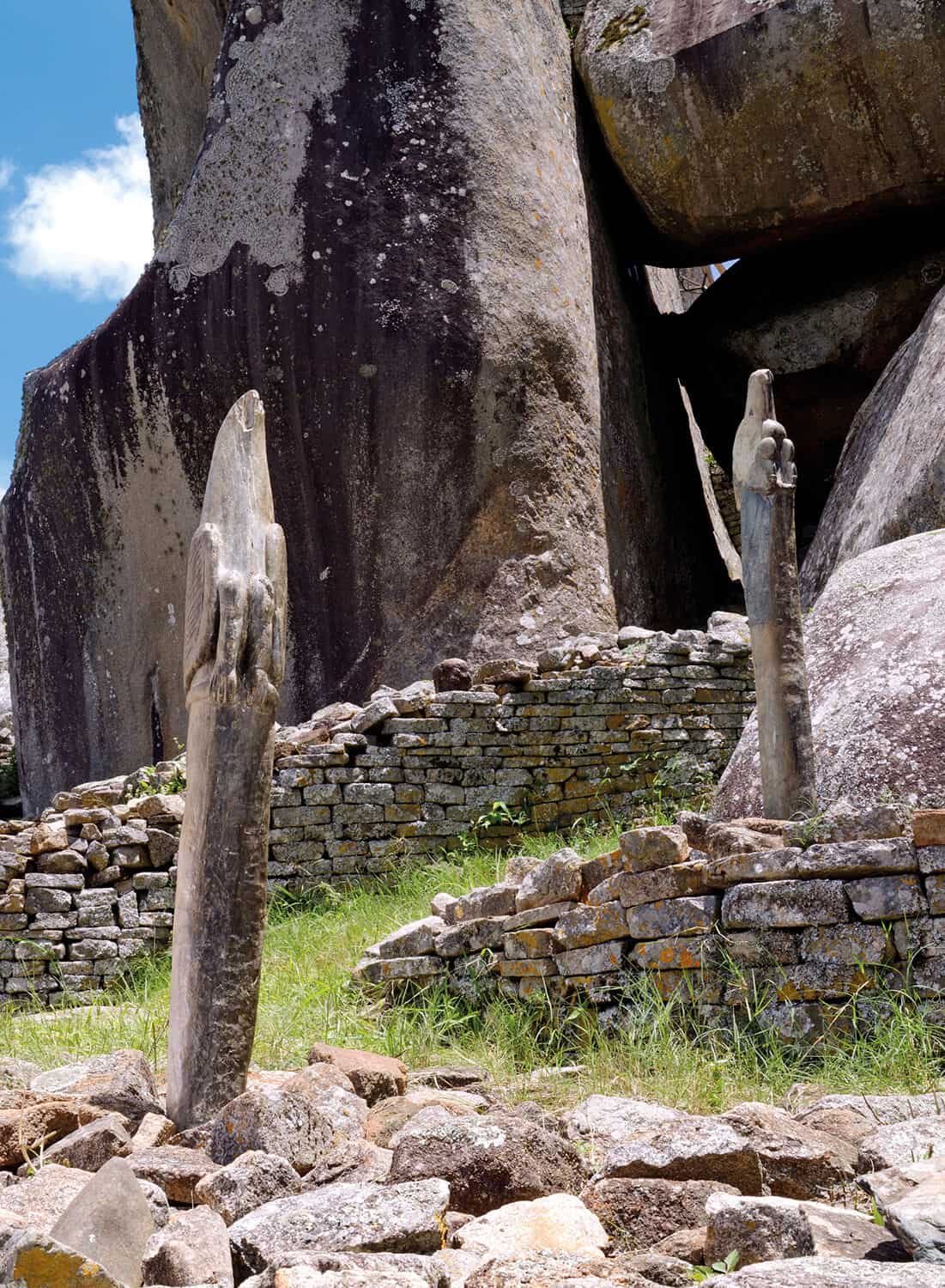 Two of the 8 iconic stone Zimbabwe birds found in the ruins of Great Zimbabwe, photographed out of the museum and in the Eastern enclosure on the hill, where they originally stood. From ZIMBABWE: Art, Symbol and Meaning. © Duncan Wylie

Erasure of history and culture has been a deep and longitudinal paradigm established by colonisers and integrated across every aspect of life one cares to examine. So effective and so toxic that even with less than a century of colonial rule and post-independence colonialism remains part of the cultural DNA of a country, subverting development effortlessly and invisibly.

In Zimbabwe, Nehanda, in particular, is an extraordinary symbol because she connects Zimbabwe to the rather urgent de-colonial imperative, While there were other leaders of chimurenga in Zimbabwe it was Nehanda, who refused to convert to Christianity by her captors an offer accepted by her fellow leaders Kaguvi, Hwata, Zidonga. Her pronouncement ‘my bones shall rise again’ is an inspiration for the second chimurenga in the 1960s, which led to independence in 1980. A monument to Nehanda matters regardless of the process of implementation because they are still the first of their kind and make a powerful and very visible statement about a culture and its values.

However, a statue is no more than a signpost, a reminder, a catalyst for such reflection. It cannot and is not a sufficient building block of culture, its shape and operation. In Zimbabwe Nehanda is a reminder of profound spirituality and cultural wealth that colonisers tried to obliterate and which at the present sees a new urban generation neglecting their native languages in favour of English, subjugating their beliefs to charismatic Christian sects, judiciary and bureaucracy still beholden to former colonial protocols, a statue of David Livingstone, a forerunner for colonialism still stands in the courtyard of the president’s office. In this regard, Zimbabwe is not too different from many other post-colonial states which are emerging from the colonial triple bind on culture:

a. destruction, erasure and demonization of tradition brought on by colonialism and missionaries;

b. devastation of looting of artistic, historical, cultural and spiritual objects;

c. misrepresentation and distortion of histories and perceptions of Africans and African cultures as told and appropriated by foreigners from researchers to artists.

In a recent webinar organized by the Brooklyn Rail with Suzanne Preston Blier interviewed by Coco Fusco on the subject of her book about Picasso’s Demoiselles D’Avignon5. In an answer to a question about the difficulty of doing research for the book, Suzanne said that research for Demoiselles was a lot easier than for her previous book, which was researched entirely from oral and physical sources in Africa, as there were no written materials. The answer was greeted with fascination and admiration for Blier instead of grief and horror at the level of destruction that has to be involved for there to be no written records of the significant cultural production of a whole people and moreover the first time such document is produced it is produced by a foreign scholar. 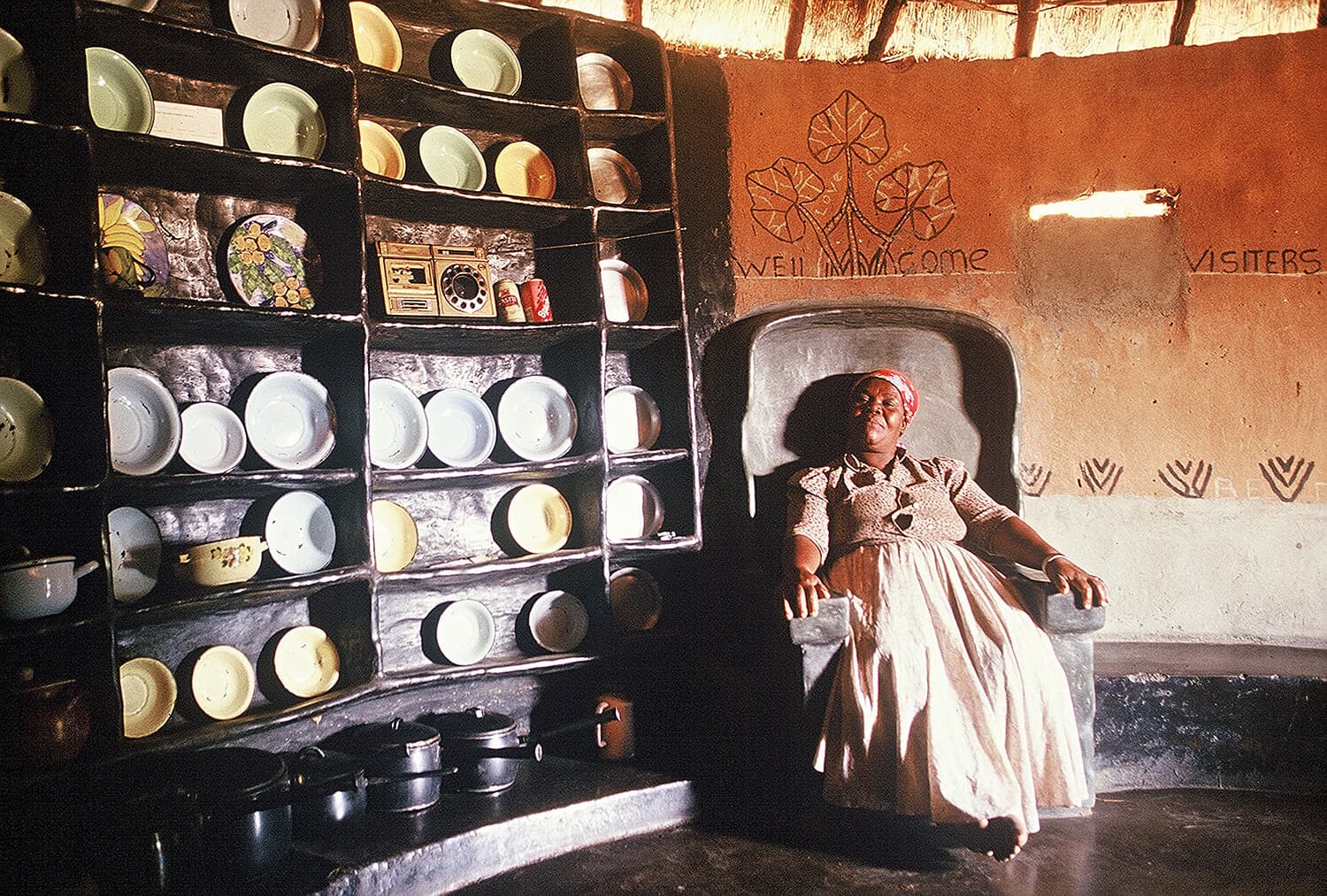 Perfect they say is the enemy of the good, the journey of building up truly local repositories of knowledge and resources for young African scholars, artists and the general public to look to is not easy. The task of redressing these historical wounds is properly part of the nation-building project. Frequently however these crucial problems are deemed less of a priority than survival needs in developing nations – healthcare, food security, education, infrastructure. And so it is often left to passionate individuals many of the artists and scholars to carry on this true history work through their own efforts, building and conserving local archives, recording reviving and preserving indigenous knowledge and researching and advocating for the ethos and the merit of the traditional and indigenous in the face of pressure to conform to the international and ‘modern’ perceived as superior.

Bisi Silva’s monograph on Nigerian photographer J. D. ‘Okhai Ojeikere, comes to mind as this kind of labour of love and dedication, which has brought global recognition and acclaim to the artist and helped revived the interest, admiration and preservation of the unique art of West African women’s hair design. In Zimbabwe, the work of Tapfuma Gutsa has been a signpost towards asserting local history and indigenous materials and traditional practices in art, as a breakaway from the colonially sponsored stone sculpture and painting traditions fostered in mission schools. 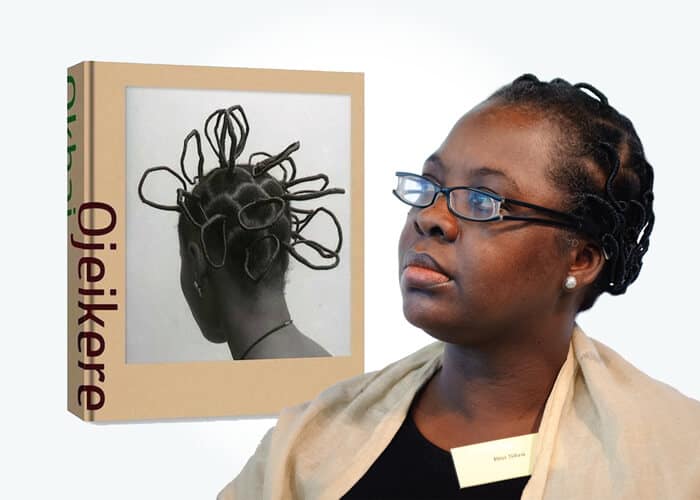 Emerging from a similar perspective and aiming to bridge a gap between art, tradition and scholarship is a new compendium titled Zimbabwe: Art, Symbol and Meaning produced by Gill Atherstone, the first post-independence curator of the National Gallery of Zimbabwe and her son and artist Duncan Wylie. The book, published in two separate editions, French and English, with 256 pages and 214 images is a product of a decades-long collection of materials, photographs, stories and analysis. As Doreen Sibanda, former director of National Gallery of Zimbabwe puts it in the Introduction, “The book is truly a lifelong pursuit and testimony to her passion for the subject and the relentless effort to understand the role played by the objects in encoding meaning in the lives of the community that generated them… The preparation of this book has taken years of steady research and devotion to bring to the attention of the world the humble and intricate handwork created throughout Zimbabwe in support of the diverse complexity of the lives of the people. I was fortunate to have travelled alongside the author as a professional colleague over many years and recall the heady days in the 1980s when the first rural forays were undertaken to collect traditional artefacts often in the company of indigenous sages who shared the passion for the artefacts and knew the territory and where genuine items still existed.”

Replete with historical and contemporary photographs taken across Zimbabwe of religious and cultural objects in context and in use in a way that is impossible to articulate in a museum display and almost impossible to gain access to for outsiders. In a unique achievement, the authors succeeded in arranging to photograph the legendary birds of Zimbabwe outside the museum, in situ at Great Zimbabwe in their original location.

Even in its breadth and capaciousness Zimbabwe: Art, Symbol and Meaning, almost intentionally bites off more than it can chew. This is not just because the field is so deep, so rich and but also because it is so incredibly in need of exposure. In its closing chapter, Zimbabwe: Art, Symbol and Meaning turn to contemporary art articulating an important narrative arch that connects ancient traditions with practices of contemporary artists in Zimbabwe – a story that has often been subsumed by the dominant narrative of colonially introduced directions and inspiration and foundation for the rich vibrant artistic renaissance in the country at present. 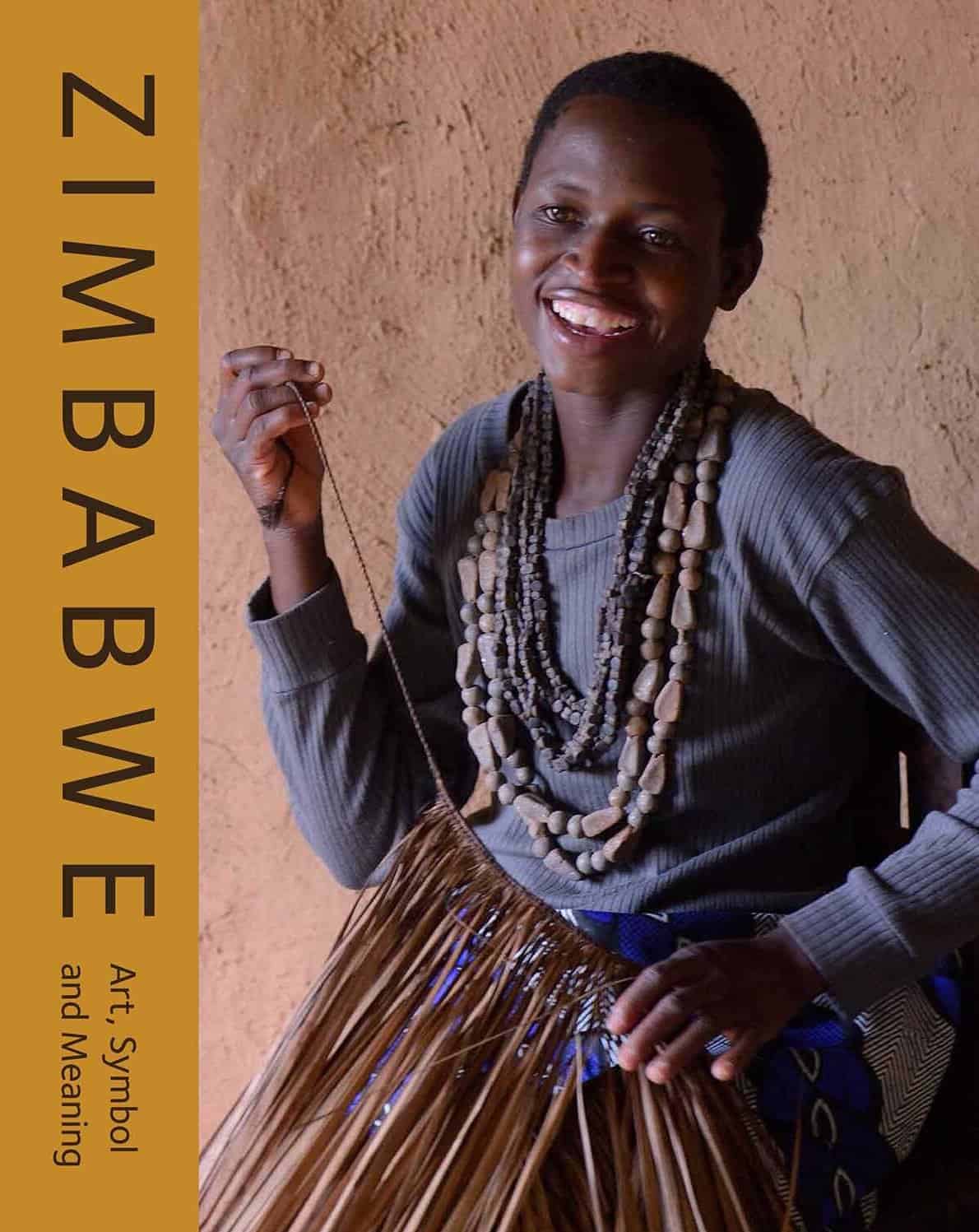 As much as a valiant effort to capture for posterity a history and culture at risk, a project like Zimbabwe: Art, Symbol and Meaning is in many ways also a call to action for local art history, archaeology anthropology and contemporary art practitioners to take up the difficult but imperative challenge of populating the space actively being created by cancel culture to bring to light and articulate and honour their own histories. Like the Nehanda statue, it is a signpost towards a rich legacy, which deserves to be voiced, seen and celebrated.