in AFRICAN ART, BIENNALE, CONCEPTUAL, CONTEMPORARY ART, CULTURE, INSTALLATION, MIXED MEDIA, SCULPTURE
Share on facebook
Share on twitter
Share on email
Share on whatsapp
Kampala Biennale 2016 Artist-in-Residence Immaculate Mali speaks to ART AFRICA about her experience of growing up in Kampala, her residency with 32° East | Ugandan Arts Trust, and the importance of workshops, such as AtWork, which helped to further her artistic vocabulary, leading to the body of work Safe Here, which will be conducted as part of a residency for the Kampala Biennale 2016, ‘Seven Hills.’ 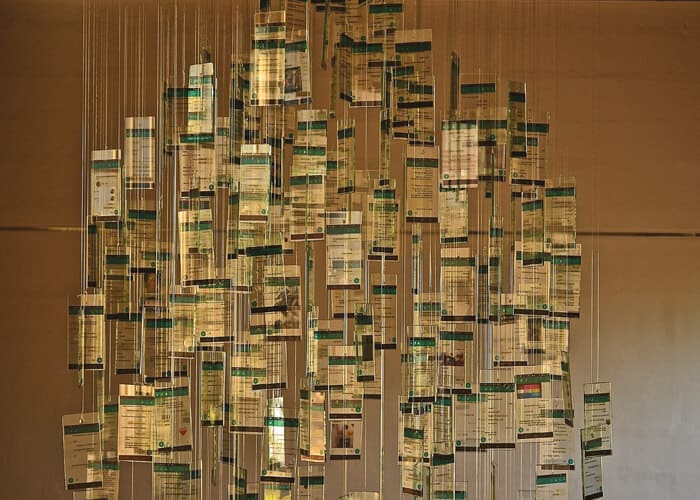 ART AFRICA: You grew up in Kampala. How has this context informed your practice?
Immaculate Mali: My early childhood was in Jinja, where I lived until I was about eight, after which my family moved to Kampala where we currently live. Kampala is a place where most gallery spaces, arts bodies and cultural bodies exist. Being able to access spaces such as 32° East | Ugandan Arts Trust – which has got personnel, a library and internet dedicated to supporting artists through residencies among other programmes – has been a great intellectual resource. Participating in arts workshops such as the AtWork Kampala chapter, by Simon Njami and lettera27, has opened my mind and imagination to different possibilities in my work – looking at myself as the subject of my artwork first before making work about others, understanding who I am. Which I think might be a life-long mission. But you can never tell what the future holds. I also use found objects from local saloons, bars and other places within Kampala to make my work.
Please tell us about the body of work Safe Here, produced for the Kampala Biennale 2016 as part of your residency?
Safe Here is a reflection on the times I spent in the physiotherapist’s clinic as a child, aged seven and eight, after a quinine injection that rendered my left limb paralysed. I watched as my peers played games such as tapo kakebe; blaada; kasonko; hide and seek and many others. The sounds of their voices resonating in my ears as they gleefully ran off to find the perfect hiding spot; a tree, a house… I remember smiling and laughing as I watched the girls playing kwepena (dodge ball), their dresses folded so high that the panty showed when they jumped and threw their legs apart in an attempt to dodge a ball; kwawuza we called it. That week of the accident, I could not quite comprehend why my left limb felt numb, with abrupt interludes of pain. The foot drop looked hopeless. That is when mum took me to the clinic. Sometimes it was just the two of us and on other occasions my friend or younger sister tagged along. This happened at least once a week and soon this small room with walls covered in charts bearing diagrams of bones, the digestive system, syrups and pills became my playground.
There was a bicycle tacked in one of the corners of the room that I rode each time we visited. I found a playmate in my new playground. He did not move much and always allowed me to climb onto his back with his two wheels on the ground. I did not have to be afraid of stepping on tiny rocks in the shared compound at home. As much as I could not ride a moving bicycle, I could ride within the four walls with medical diagrams as my visible destination. Memories of the children playing in the compound kept me moving. Sometimes, I imagined I was in a race with Denis or Martin or any other child riding. I think it helped having my sister and friend taking turns to ride after me. It made the entire routine less alienating.
Safe Here is going to be an experiment, a reflection and exploration around emotions that can be aroused as a result of imagination and memory. I will be collecting sounds from playgrounds in local primary schools, like those I attended as a child. It will be interesting to see how the local games have evolved over the years. Each individual who is present at the performance will travel through their own imagination, triggered by the sounds and actions taking place. 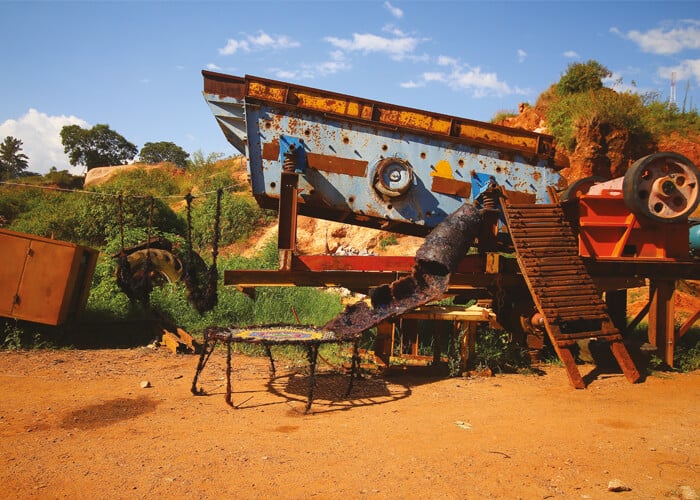 Immaculate Mali, detail of Daddy Can I Play?!, 2013. Playground. produced during a residency at 32° East | Ugandan Arts Trust. Photo: Alex Lyons. Image courtesy of the artist.

In 2013 you did a residence programme here in Kampala with 32° East, called Daddy Can I Play?! Is Safe Here a continuation of this previous work and if so, what direction has it taken over the years?
At the time I made Daddy Can I Play?!, I knew curiosity in children was something I wanted to work around as it was something I had only touched on during my final semester in school. How I was to approach the topic however was an experiment that I am glad to say made my residency worthwhile. The creation of the work was mainly fuelled by my subconscious and research. It was over a year later, after the AtWork workshop (where I made Denounced Surrogacy, a Moleskine notebook covered in razor blades and pins) that a friend asked me if there was something from my childhood I wanted to share. That is when I realised I probably did.
Since then it has been a journey of reflection, on my past in relation to my present and  speculations about the future, which can be seen in works like 18MUSTS (on rules as barriers) and Dancing with Myself (on a struggle to get out of a trap such as social structures). Safe Here is both a physical and virtual playground still exhibiting barriers that also existed in Daddy Can I Play?! but in a more physically engaging form. 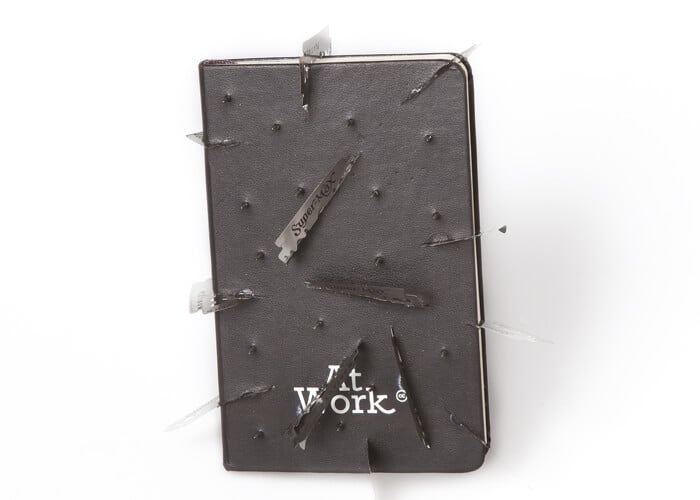 You graduated in 2013 from the Makerere University, Kampala. Over the course of the residence you will be working quite closely with local institutions, doing workshops. Please tell us a bit about your experience of the arts at school? How important are these workshops? What are you hoping to achieve through yours?
Art school is a place I am glad I attended. Although there wasn’t much room for experimentation, a lot of emphasis was put on learning the traditional forms of art, such as drawing, sculpture, painting and later, photography. The skills I learnt during my time in school are those that I still use in my experiments with less traditional media. What I love about these workshops is the dialogue with the facilitators and other participants. You will be amazed how much can be triggered when you share as a team. Lots of construction and deconstruction of ideas, at times coupled with frustration. Then eventually the making. It is an environment that breaks and builds me all in the same moment. I enjoy them. The design of these workshops – where the process of making is given a lot of attention – is probably what makes them successful.
There’s a wealth of knowledge in each of the participants and it’s through sharing that one can tap into it. Dialogue with better experienced artists and practitioners in the arts opens one’s mind to diverse possibilities through experiments. I hope that through the workshops different people just let go and try to be honest with themselves.
In 2014 you participated in a number of cultural events in Kampala, namely the Contemporary Arts Festival, the Laba Street Art Festival, and the Bayimba Art Festival. What sets the Kampala Biennale aside from these events?
The KLA art festival focuses on the local emerging artists which is a good avenue for us young artists to find our feet. The biennale on the other hand takes on a broader scope of artists from around the globe, bringing a wider range of experience to the local scene. This is important, especially for local artists and practitioners to experience what is happening on a broader contemporary art scene.
This interview was first published in the September 2016 edition of ART AFRICA magazine, entitled ‘BEYOND FAIR’.