Knysna-based artist, John-Michael Metelerkamp remains an enigma. It might be the 19th century romantic notion of the struggling artist, anarchistic in nature, rebellious, depressed, misunderstood and tirelessly fighting inner demons – whose battle is then visually redistributed onto a canvas in an attempt to make sense of a complex and volatile existence.

It might also be that he only started painting in 2013 – his early thirties – after years of struggling with mental illness and substance abuse. Since then, he hasn’t stopped painting in the Wendy House studio he built in his mother’s garden, and has quickly developed a reputation on the local scene after being signed by the Candice Berman Gallery in 2015.

Following years of spiritual and philosophical paradigm shifts, from Christian fundamentalism to varying forms of the conspiratorial, Metelerkamp was sent to a neuro clinic by his parents. Subsequently he spent the ensuing months dormant in his home until his brother approached him with an ultimatum. 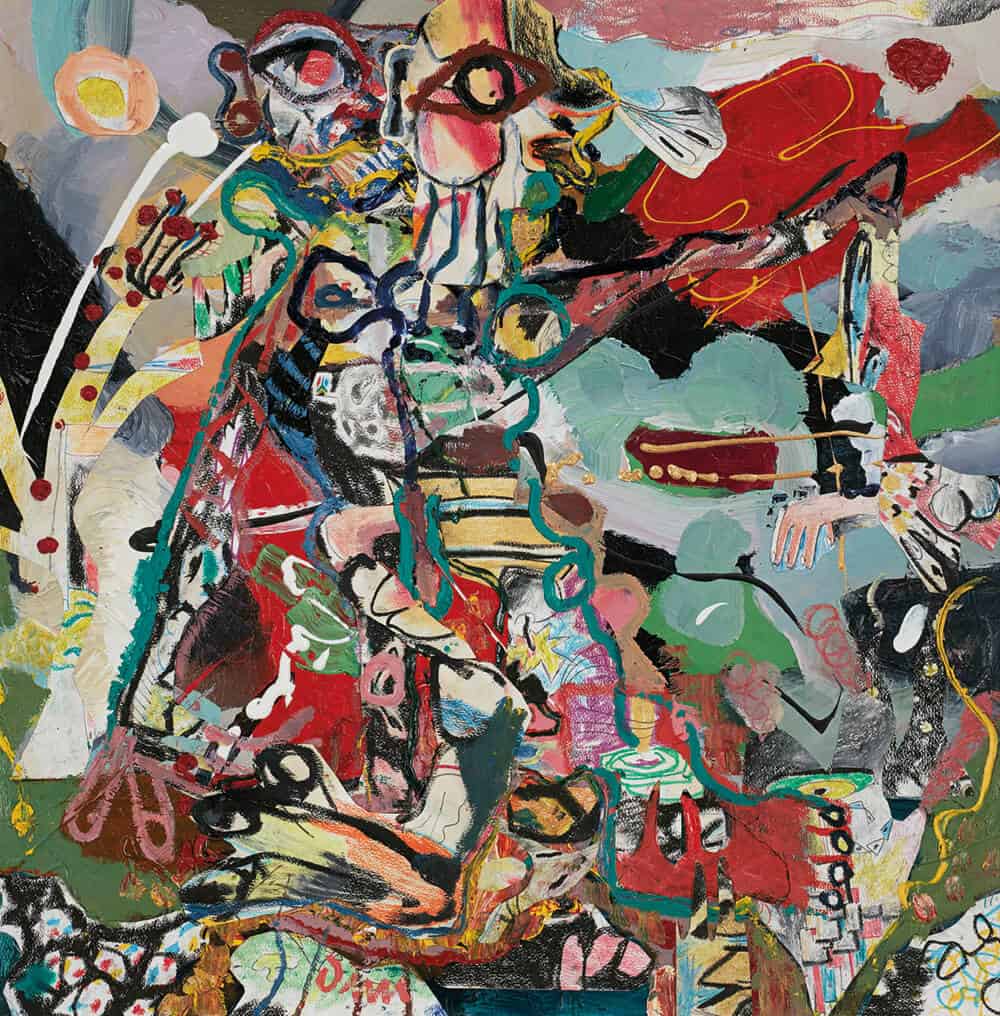 John-Michael Metelerkamp, Nekkies 6 from the series ‘The Immortal Nekkies’, 2018. Mixed media on board, 90 x 90cm. Courtesy of Candice Berman Gallery.

“I have always been quite intimidated by painting, but I have always wanted to paint. It all started with a push from my brother. He simplified it and said, ‘paint anything’, so I did. I can beat myself up sometimes for not having one style that signifies my work. But I am just doing what comes naturally to me,” he says.

In his latest series, ‘The Immortal Nekkies’, to be exhibited at The Turbine Art Fair in July, Metelerkamp steps into yet another paradigm – neo-expressionism. Figurative and surrealist, his previous works concentrated on beady-eyed people in swirling landscapes, distinctive wildlife and abstracted and peculiar still-life forms. But his most recent paintings are more chaotic and layered. Presenting the viewer with a sense of discomfort that is deeply subconscious.

The series was inspired by a group of people that live on the outskirts of Knysna, in a highway settlement called Nekkies. “I feel I can identify with some of the characters I’ve seen there, not their circumstances, but the feeling of utter despair. There is a tavern along the highway running through Nekkies, there is always plenty of people, dogs, cattle and cars around. But you can feel a sense of uneasiness on that stretch of highway,” he says. 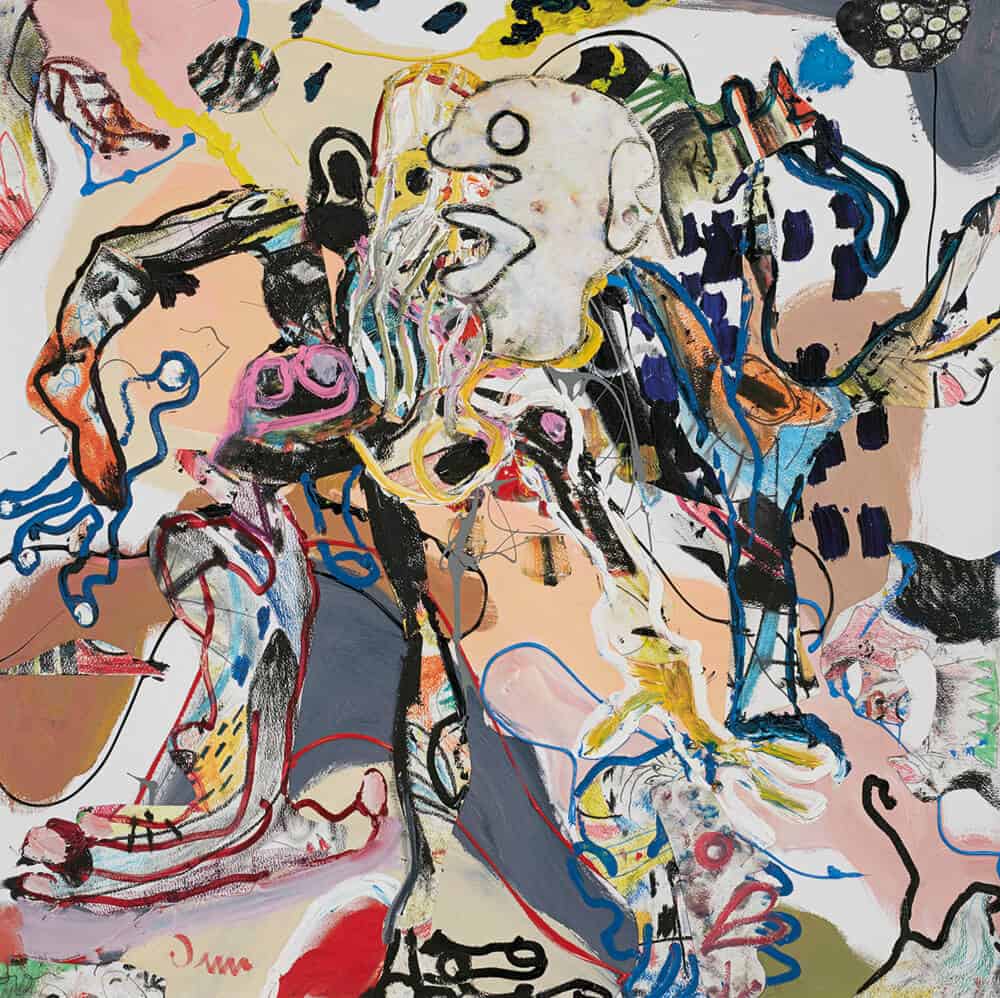 John-Michael Metelerkamp, Nekkies 10 from the series ‘The Immortal Nekkies’, 2018. Mixed media on board, 90 x 90cm. Courtesy of Candice Berman Gallery.

His paintings are an amalgamation of acrylic, oil and cut-outs from his old sketchpads – bringing to mind the work of late Neo-expressionist Jean-Michel Basquiat and German artist Jonathan Meese. His work is provocative and glaringly emotional. It lays bare the complexities of the human psyche, making reference to the worlds agenda that can be seen manifested in the dichotomy of the physical versus the spiritual human experience.

“I feel the tension in my paintings alludes to an internal dialogue between landscape or figure, or eyeball and elbow. The paintings are like alien growth in a far off land, that when they fall to the ground they will make a sound. Even if no one is around to hear it,” he says.

Anxiety, trauma, awkwardness and depression are poignant themes in Metelerkamp’s work, making clear reference to the turbulent and mercurial state of the mind. With his own challenges, painting has been an indelible part of his journey to becoming “a more whole person”. 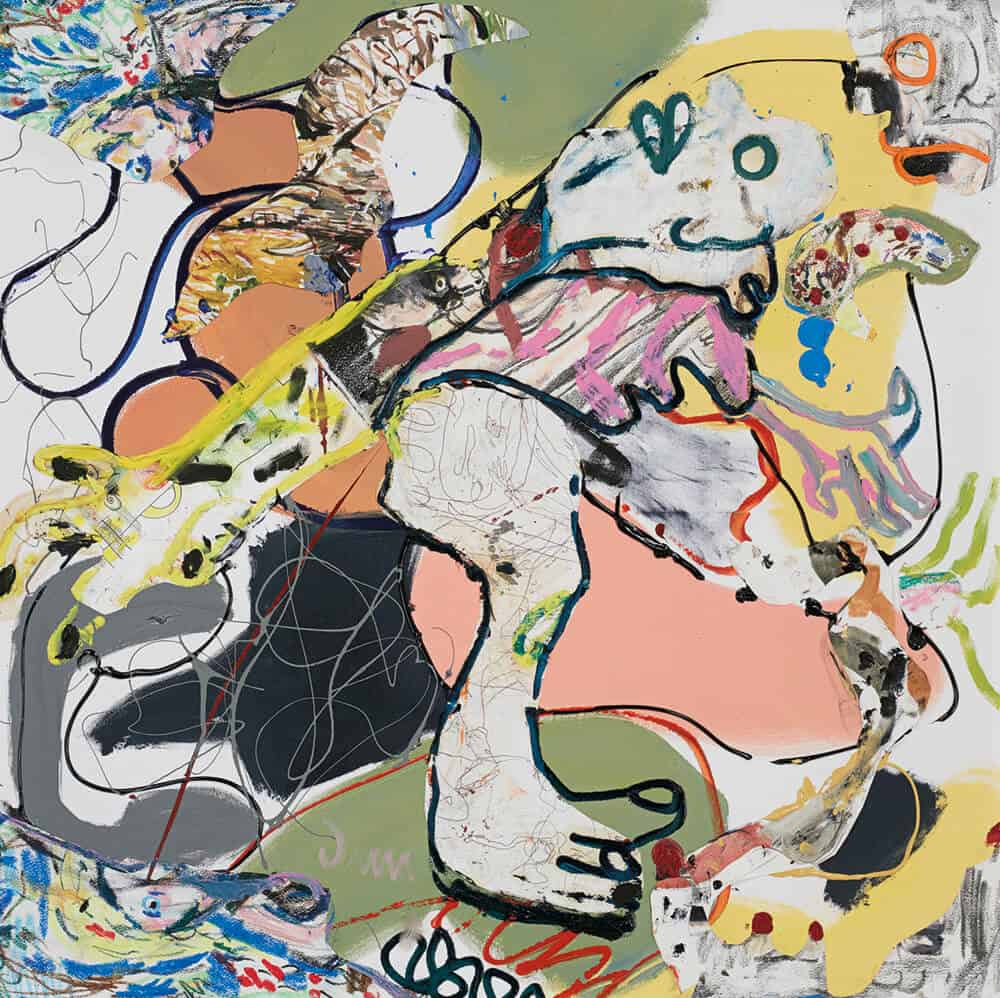 John-Michael Metelerkamp, Nekkies 13 from the series ‘The Immortal Nekkies’, 2018. Mixed media on board, 90 x 90cm. Courtesy of Candice Berman Gallery.

“Depression was one of the factors that led me to painting. And the mental struggles of past and present have been a driving force in my work. I feel better when I work and the world makes a bit more sense every time I connect with the process of painting and a finished work,” he says.

Metelerkamp is brief and concise in his commentary and lacks any hint of intellectual verbose or self-importance. His quest to fully explore and understand the human condition is sincere and genuine, but leaves one curious and eager to delve deeper into the mind of the man who holds the paintbrush.

Amy Gibbings is a writer on ART AFRICA’s editorial team.