In and Out of Art History

“How can the removal of one statue then be replaced by photographs glorifying heterosexual men who are guilty of sexual assault?”

By the time Cecil John Rhodes (1853-1902) became Prime Minister of the Cape Colony in 1890, his De Beers company was on its way to dominating the world diamond trade, and a new mineral exploration venture into southern Africa had the backing of the British government. During his tenure as Prime Minister Rhodes oversaw the introduction of the notorious Glen Grey Act in 1894, which sought to remove black people from land the Cape government wanted for industrial development. During his introduction of the Bill, Rhodes was unapologetic about his infantilising racism, claiming that black people “lived about in sloth and laziness, and never went out to work.” For him it was the responsibility of government “to remove these poor children out of their state of sloth and laziness, and give them some gentle stimulants to go forth and find out something of the dignity of labour.”

When he died in 1902, he had accumulated a vast fortune by conniving and corrupting the mutual interests of the expanding British Empire and his personal ventures to exploit mineral concessions. Being unmarried and without a family, Rhodes’s will made provision for extensive donations of land and money, including the foundation property for the University of Cape Town (UCT), and an international scholarship to fund study at the University of Oxford. The memorialisation of Rhodes was pervasive. Rhodes Memorial, designed by Sir Herbert Baker in the style of an ancient Greek temple, has dramatic vistas from its location in the shadow of Devil’s Peak. His cottage in Muizenberg, overlooking False Bay, is a museum to his life and work. A monumental sculpture of Rhodes astride a horse stands in Kimberley, and the Kimberley Club, with its paintings, photographs and memorabilia, remains a visual homage to the man. A university in Grahamstown is named after him. And of course, for just over eighty years, a statue of Rhodes stood on the steps below UCT’s Jameson Hall.

It is haunting to this that all of these acts of remembering are silent on the violence and greed that underpin Rhodes’s memory and legacy. And remarkable that it took Chumani Maxwele, with his bucket of excrement from the streets of Khayelitsha, to remind everyone of this violence and greed. In what became known as the “poo protest,” Maxwele came onto campus on the morning of 9 March 2015 and tossed the excrement at the statue of Rhodes. It hit a nerve, sparked a tsunami of protest and on 9 April 2015 the statue was removed from public view.

With everything that happened in the interceding thirty-one days between the excremental act and the triumphant removal of the statue, what does it mean for South African art history? Does it still matter that Scottish-born artist Marion Walgate (1886-1975) produced the statue in London in 1932 and that it was installed on campus in 1934? Or that Walgate produced other sculptures that are still variously installed on UCT’s campuses? Can it be business-as-usual art history in the face of the #RhodesMustFall movement, which so virulently rallied against the statue of a white man contemplating a vista out towards the Cape Flats? In thinking towards some of these questions, it is useful to consider the events around the removal of the statue, as well as subsequent events, in art historical terms, and notably in relation to iterations of iconoclasm. 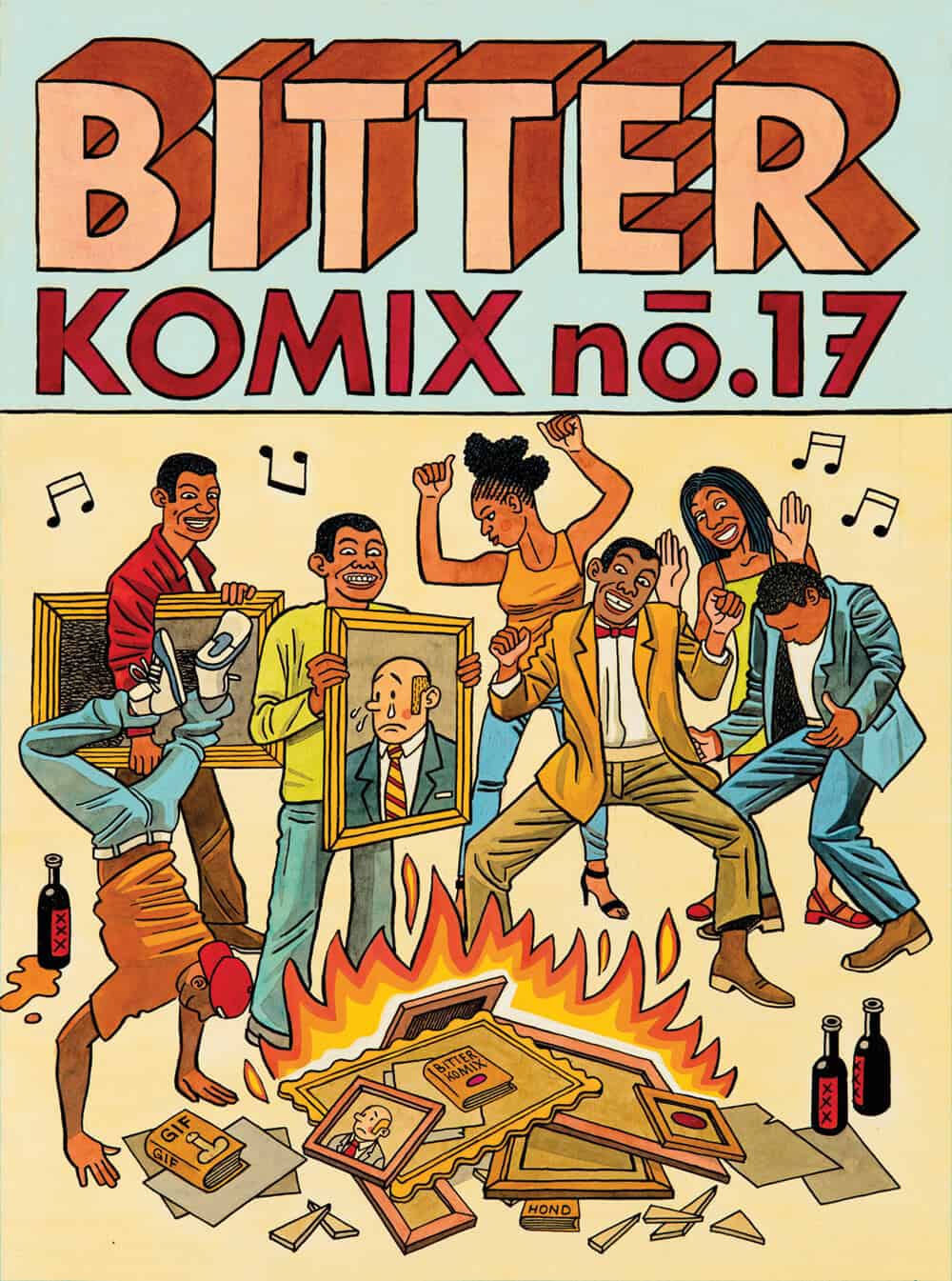 Cover image of Anton Kannemeyer and Conrad Botes’ Bittercomix No.17, 2016. Image courtesy of the artists.

It is not too difficult to see and read the excremental act as a form of iconoclasm that itself induced further acts of disrupting the likeness of a colonial status quo – including tagging the statue with graffiti, splashing it with red paint, variously draping and wrapping it in red and white cloth and chevron tape and covering it in black refuse bags. In times of revolution, statues of rulers and leaders on the right and left of history have been routinely destroyed by the will of the people. Sometimes it’s not only the will of the people. What is critical in many of these instances is the very visual performance of toppling a larger-than-life statue set atop a tall plinth, which then crashes to the ground and is variously decapitated, smashed, dragged and dismembered. This is one of the lasting – iconic, ironically – expressions of iconoclasm and its representation in the history of art and photography.

But with the statue of Rhodes at UCT, any iconoclastic apogee was neutered by the controlled, conservation-sensitive removal of the statue – upwards by crane (rather than downwards by rope), onto a waiting truck (rather than into a waiting crowd) and away to an undisclosed place of safekeeping. The nature of the removal, and in particular its attendant secrecy, ensured the survival of Marion Walgate’s sculpture as much as preserved the image of Cecil John Rhodes. In this sense, it was art history redrafted to another script, in which Maxwele’s act of iconoclasm “was hushed away, first by the removal of the statue, and then in the (apparently unrelated) disciplining of the agent and actor of this incitement. What remained, in tune with a wider practice around public memory, was nothing-ness.” When iconoclasm fails, when it is cut short, it risks becoming a nothing-ness that only holds what is unrealised. What is a properly rebellious iconoclasm in re-making art history? What is its proof against nothing-ness? Some other examples from #RhodesMustFall are instructive.

In mid-February 2016, UCT students removed artworks from two student residences, as well as Jameson Hall, and burnt them in a bonfire. The artworks were described by one student as “symbols of the coloniser. […] We [must] go to each and every building and every problematic white person’s picture we must takedown.” Students described their actions as a “decolonising project.” The destruction of the artworks represented “colonial symbols being eradicated.” Many art aficionados pointed out that the indiscriminate burning included a work by Keresemose Richard Baholo, the first black student to graduate with a Masters degree in Fine Arts from UCT, and suggested that “some of the art-burners might usefully have spent more time in the library studying South African history.” In describing this sympathy for Baholo as “concern trolling,” Gugulethu Mhlungu pointed out that: “Until his painting was one of those burnt by students at the University of Cape Town last week, Keresemose Richard Baholo was essentially missing from public discourse and memory. […] He, like many other black artists, contributors, professionals and thinkers, simply did not exist as far as current thinking was concerned.”

In spite of his artwork being reduced to a form of nothing-ness, Baholo himself continued to sympathise with students: “I would appeal to the university management to anticipate and not underestimate the anger and the discomfort their delay [in transforming the university] is causing the students.”

The #RhodesMustFall movement is constituted by different sectional interests, bound together by an understanding of their intersectionality. The complex negotiation of these interests came to a head in early March 2016, when Paul Weinberg, veteran anti-apartheid photographer and currently curator at UCT’s Centre for African Studies Gallery, facilitated “Echoing Voices from Within,” an exhibition curated by #RhodesMustFall students that reflected on the first year of the movement. The exhibition opening, exactly one year after Chumani Maxwele’s excremental act, was disrupted by members of Trans Collective, a student organisation advocating transgender, gender non-conforming and intersex rights on campus.

Protesting the marginalisation of their interests by the #RhodesMustFall movement, as well as their lack of representation in the exhibition itself, the group of students wrote with red paint on some of the photographs and plastered pink notices on others – with statements such as “We will not have our bodies, faces, names, and voices used as bait for public applause” and “RMF will not tokenise our presence as if they ever treasured us as part of their movement,” as well as lying down and blocking the entrance to the gallery. Trans Collective claimed that only three of the images on the exhibition showed a trans person’s face, which contributed to the organisation evolving its role “into speaking back to RMF and keeping it accountable to its commitment to intersectionality precisely because it is positioned as a black decolonial space.” 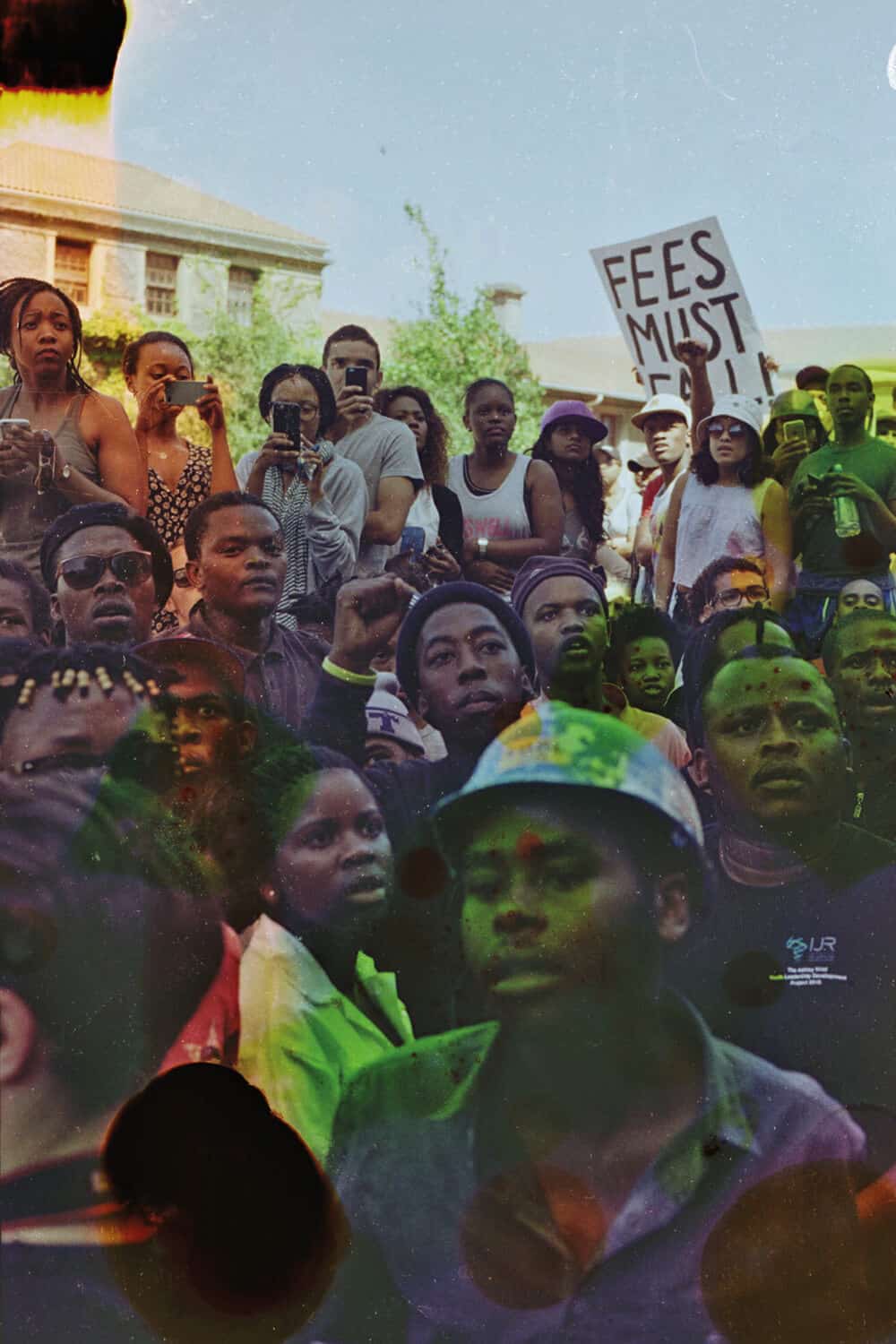 In an address to the audience gathered for the exhibition opening, the Trans Collective’s HeJin Kim asked the question: “How can the removal of one statue then be replaced by photographs glorifying heterosexual men who are guilty of sexual assault?”

And then in early April 2016, partly in response to the burning of paintings two months earlier, the University of Cape Town began variously covering and removing artworks from the university collection that were on display in public areas of the campus. These include Diane Victor’s Pasiphaë, a work the artist calls a provocation to South Africa’s white male farmers, but which the chairperson of the university’s Works of Art Committee suggested was offensive: “The piece by Diane Victor was identified as offensive as far back as the Rhodes Must Fall protests in 2015. The Artworks Task Team recommended that it be stored pending their deliberations […] in the wake of the burnings in February. […] [The] exercise should be read as an essay in creative curation, and strictly part of the dynamic process of engagement underway.”

According to the University, the artworks will remain out of sight until the university develops a new curatorial policy for the display of artworks in public areas of campus.

As Mzukisi Qobo suggests, “[c]hanging institutional culture entails more than removing the statue of Rhodes.” Each of these three further examples, like the removal of the statue, are implicated in forms of nothing-ness. Each is both visible and visual, and as shifts in visibility – between what is more and less visible (in removal, concealment, defacement and destruction). Each instance also has its own visual act of rising, burning, boxing and nakedness. They provoke nothing-ness as much as glance at what constitutes nothing-ness. And as such, they signal new complexities for writing contemporary art history in South Africa. To write these art histories, from here, begins with navigating the relevance and impotence of this art historical language of nothing-ness.

Dr Rory Bester is an art historian, critic, curator and head of History of Art at Wits University.