‘In Context: Africans in America:’ In Conversation with Julie Mehretu

“At any given moment in time, as I work on a piece, events are unfolding around me, and are a part of my life, the studio and my practice – the Arab/African Spring is one example. I had the news on constantly as I was painting. This all finds its way into my work; to embrace the various histories, contradictions, and complexities; to mash them up, bind them and maybe find the breaks.” 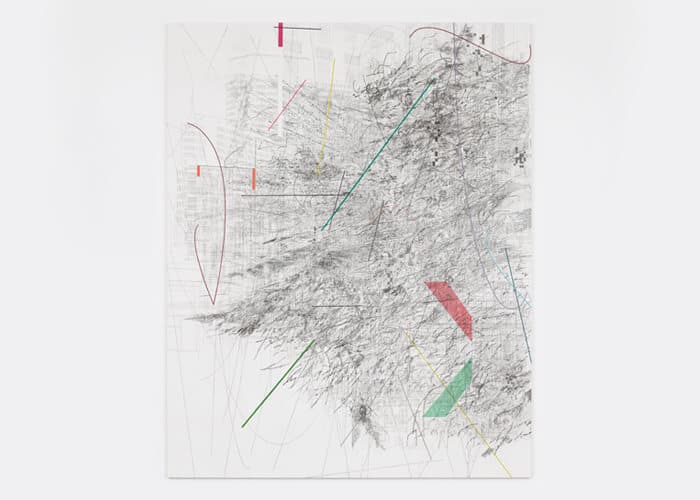 ART AFRICA: You’ve lived in numerous places, from Addis Ababa to Dakar, Berlin, and New York. At what point in your artistic career did you realise that the built environment was a kind of metaphor or nucleus for your thought processes?

Julie Mehretu: I began to draw on mapping and architecture, its history and the history of the city, quite early in my work and investigations; soon after graduate school. The spatial history of the city and its architecture provided me with socially specific metaphors for systems of thought, desire and power. Within that context, the marks participated in constructing and deconstructing the spatial mechanics and the experience of the work. It was a way to collapse space and time onto and within which I would draw, paint and evolve. In a way it was an effort to make sense of and distil my experience in and of the world, a way to locate myself. The last significant body of work that drew heavily on the architectural drawing was my Mogamma series. I’ve made a few paintings since that use this same language (Cairo, 2013; Damascus, 2015) but in the past several years that language has found its way out of the paintings.

In a previous interview you say that your works “couldn’t exist with rational thinking.” What did you mean by this?

I rely heavily on my intuition. It’s a big part of my process, paying attention, getting my head out of the way, letting instinct and chance guide my making but also in mining my direction and interests. It comes from the distillation of hours and weeks of thinking about the work, researching, looking, feeling, and responding. I don’t make art in a vacuum, I work from within my world – my work, my desires, my attractions – it is my compass. This is a sense like any other, and it is one I have worked for years on developing and understanding. You can’t make without a sense of direction, without thought going into the process. It’s part of a continuum, both my own, as well as a broader art historical conversation. 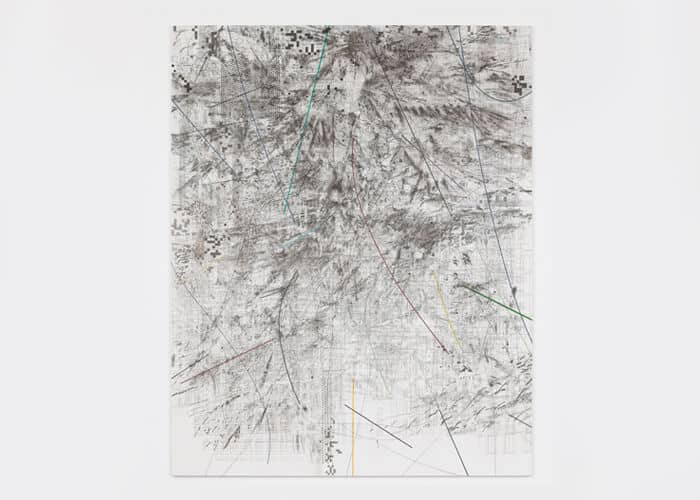 You work predominantly on a large scale. How are your paintings intended to occupy space?

I’m interested in the processes of layering and erasure, and their relation to history as something that never really leaves. The elements of architecture that are defined in your work also carry their own historic, political and social connotations. What do you aim to achieve by placing all these elements on the same page and interacting with them?

The various layers of my work are visual information, social language, coding, and context – some definable, decipherable, and some not. At any given moment in time, as I work on a piece, events are unfolding around me, and are a part of my life, the studio and my practice – the Arab/African Spring is one example. I had the news on constantly as I was painting. This all finds its way into my work; to embrace the various histories, contradictions, and complexities; to mash them up, bind them and maybe find the breaks. The paintings can’t be simply read and understood, they are not didactic. They can’t even be reduced to that single event, even if in some way the geography of a painting comes to be defined by it. The gestures, the marks, the erasures, they’re a resistance to reduction, to being defined or seen as explanatory. It’s an insistence on opacity, abstraction, the experience in the complexity of a moment that is bookended and attached to the past and that moves forward into the future.

You’ve produced work around the revolution that occurred in Tahir Square, Cairo. In an interview with Modern Art Notes you expressed a frustration with how that revolution bottomed out, became corrupted, and that it felt like these social behaviours were somehow repeating themselves. In this sense, do you consider your work as an alternate or imagined space, where potential alternate futures could be realised?

The impulse is towards that, to find the breaks, the gaps, the fissures, to paint through them, to explore or create spaces of a possible emergent other. 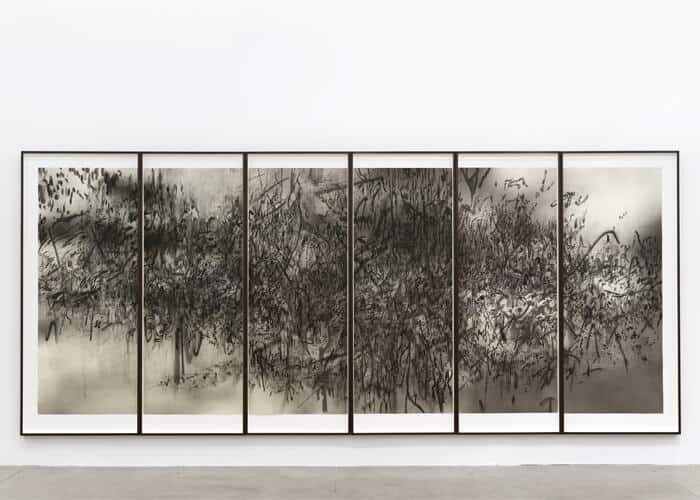 Whilst abstraction has always played an important role in your practice, your latest exhibition ‘Hoodnyx, Voodoo and Stelae’ at Marian Goodman Gallery depicts a very clear break from your previous works. How do you perceive this transition going forward?

The orientation has shifted, and the geometric/architectural references have been removed, putting this new work on a deeper footing into abstraction. I have evolved and deepened my commitment to an intuitive sense, which is perhaps a reflection of the passage of time; not feeling the need to offer the visual cues that a viewer can understand or interpret, not feeling the need for that structural backbone. Making a decision, in fact, to throw out that backbone, those metaphors, that grounding, in order to invent within a language of painting and abstraction, to invent visual neologisms. Pulling from the history of painting, its marks, its language, then mashing up those quotations into another space – ‘JUMP–CUT–ZOOM’ – one mark part Nauman/ part Oehlen/part Guston/part Hammons/part Mitchell/part Bhabha /part Ofili/part Mehretu. Neologisms exist and are invented from a “culture of dissatisfaction,” from parts of language for those of us who feel that the language at hand is not enough and problematic as is for mining and imagining new futures. The necessity, in fact, of rethinking and re-inventing as part of an ongoing conversation. At the moment I am working on two very large-scale commissions for SFMOMA, which will take this evolved form of mark-making, this new language, to a new place – in this instance, across the largest surfaces I’ve ever made.