In Conversation with Asha Zero

in News Articles 2013
Share on facebook
Share on twitter
Share on email
Share on whatsapp
Ashraf Jamal in conversation with Asha Zero on his recent solo exhibition at 34FineArt
Ashraf Jamal: Hello Asha! You recently had an exhibition at 34FineArt, could you tell us how it panned out?
Asha Zero: Hi Ashraf, Yes, the exhibition was a titled ” forget about the goohexx : send in the du_plicann”. This exhibition had a bit of a contrast with previous show,, which consisted of very dense and complex paintings; this show was a collection of less fragmented portraits. 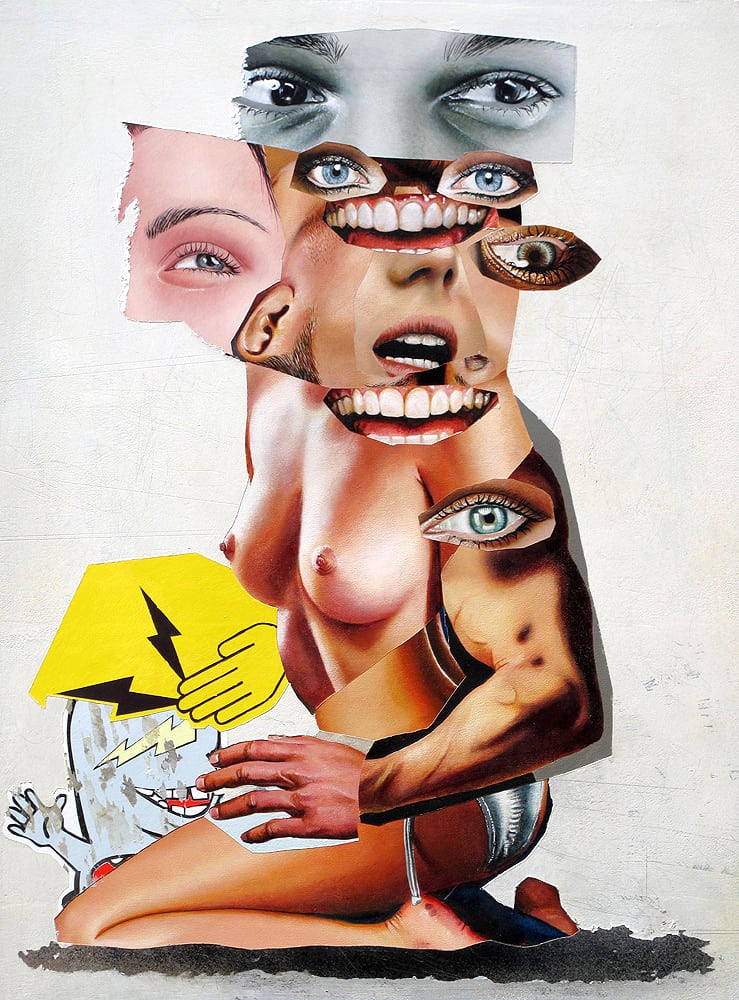 Asha Zero
AZ6.  CERRBI 2013
Acrylic on board
60 x 45cm
AJ: It’s amusing that, online, you have to remind the viewer that what they are seeing is NOT COLLAGE. Could you talk about your technique; is it a kind of realism? And when and how did you figure out that you wanted to trick the eye? What you are doing is a kind of trick, an illusion, which goes way back to the tradition of trompe l’oeil … could you fill us in on this?
AZ: The paintings consist of images sourced from various forms of media like magazines, the Internet and so on. I then create a collage composition which is reproduced by hand to create a painting which resembles the collage. The painting is executed in acrylic paint on wooden panels.  Acrylic paint allows for hard edge masking, smooth matt surfaces and quick layering of work, the rendering of the photographic bits such as eyes and ears are a bit trickier in acrylic paint, though but the aforementioned benefits of acrylic paint as well as its stability is worth the trade off. The process evolved from collages and mixed media drawings I had produced years ago; I wanted to “smooth” out the surface of the work by using only one medium. I liked the way the paint would fuse with the paper, but I still wanted  the  compositions to appear as “stuck” together, almost like taking a photograph of a collage, except by reproducing it by hand for a “warmer” effect. I started to reproduce the magazine-sourced bits of the work by copying those bits directly on to the paper, and so the collaged multimedia drawings became paintings and it all escalated into more complex compositions.
In terms of it being a kind of realism , I guess one could say it is realism in terms of the particular “realities” of consumer culture and mass media. The work does employ the trickery of trompe l’oeil but whereas a lot of trompe l’oeil works employ forced perspective or create illusions of depth or three dimensional objects, this illusion emphasises the surface and flatness of the image. 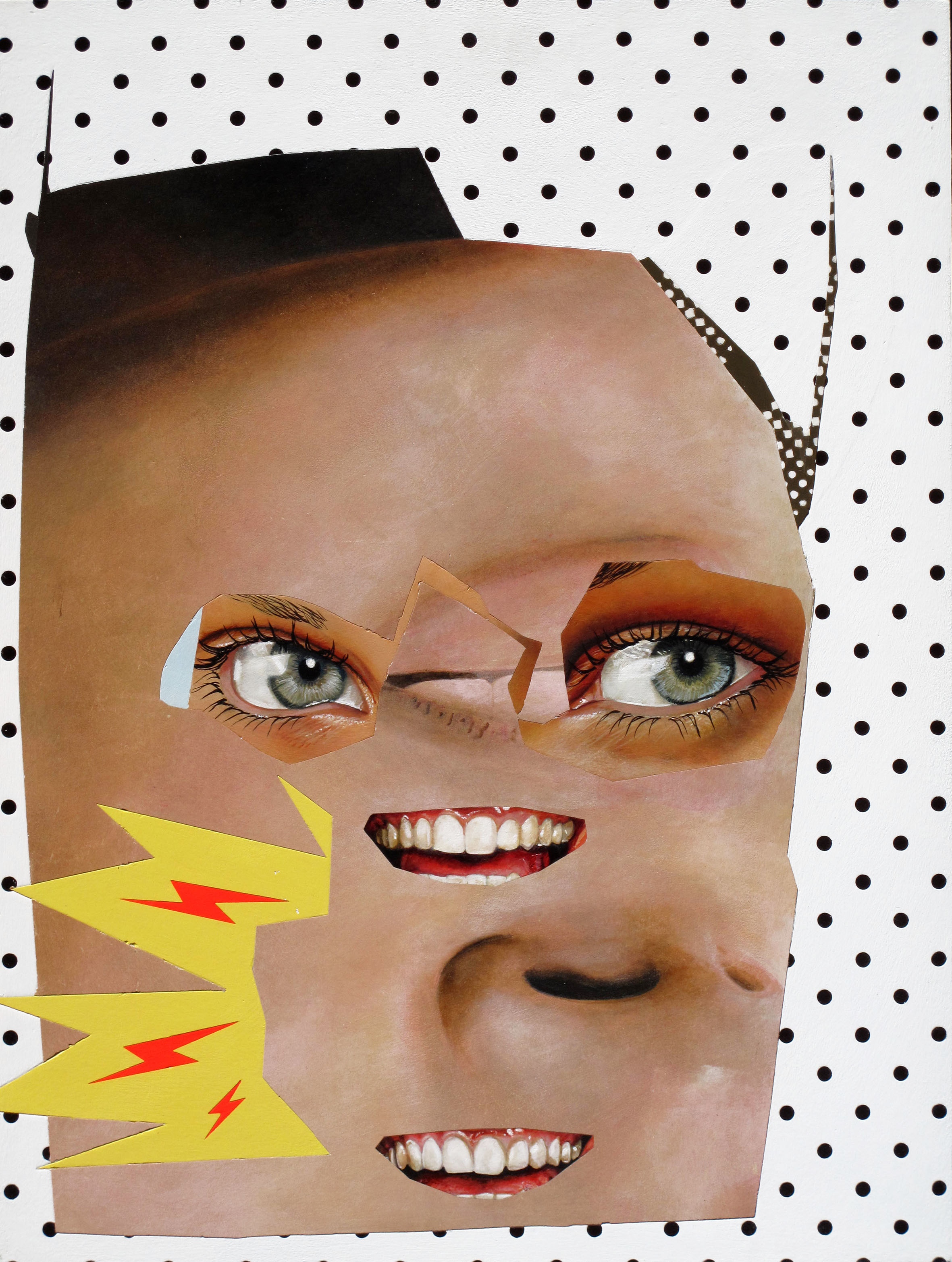 Asha Zero
DU_PLICABB 2013
Acrylic on board
60 x 45cm
AJ: It seems that in today’s world – a world after the postmodern – people are sick of tricks … they need transparency – something real. So how do you position yourself: an artist who is as into tricks as he is into the real?
AZ: I  think it has something to do with the time consuming and meticulous process involved in achieving this trick, because a lot of care and effort is invested in the rendering of banal mass media images which were intended for quick turnover. The almost shrine-like devotional aspect of re-painting these images by hand sets up an interdependent juxtaposition between trickery and a laborious technique.

AJ: You use – or reproduce – a lot of imagery from magazines, or tabloids … you like to recreate the look of “street art” … so how do you reconcile life in a gallery with art on the streets?
AZ: I don’t think the two can really be reconciled. I reckon however that we are dealing with strands of pop art manifesting similar aspects of a zeitgeist in popular culture and its methods of image production.  Gallery bound pop art uses imagery and techniques in terms of the constraints of the gallery system, its relation to the gallery audience and market, where the dialogue of pop art on the streets has content input by wide participation and direct feedback of a wide audience. Popular culture is the link, it pervades private and public space. 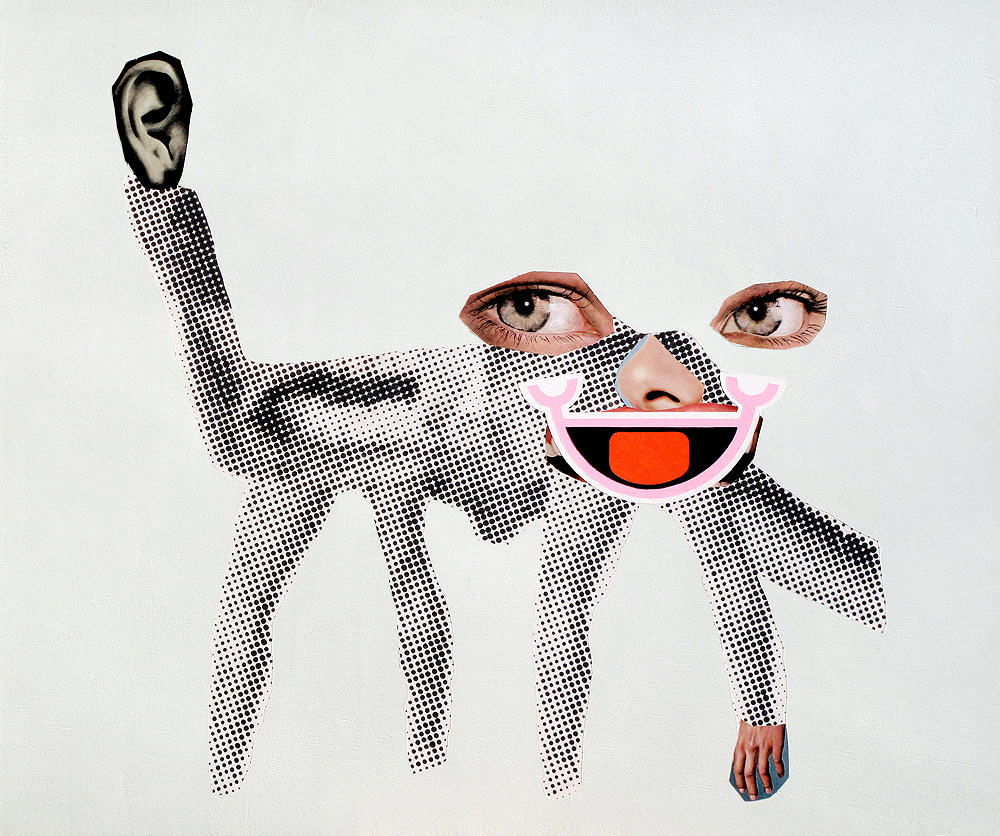 Asha Zero
AZ13.  CORRBIVALEX 2013
Acrylic on board
100 x 120cm
AJ: Dada is a major influence on your work, much more, it seems, than a surreal take on collage … could you talk about these early modernist influences?
AZ: Ever since the incorporation of photomontage and collage as artistic practice, the dadaists and early modernists set us on a course of sustained dialogue and interaction with imagery as referential texts and signposts. The resulting manipulation, shifting and sampling of the narratives of cultural practice has fostered contemporary art as a referential practice in which artists are able to practice in rich networks and work with complex juxtapositions.The process in “forget about the goohexx : send in
the du_plicann” may have a few possible links to these juxtapositions such as the compositional games of surrealism and Dada played off against the use of a traditional techniques, such as painting to reproduce serial media elements, authorship by means of appropriation, as well as interplays of figuration and abstraction.
AJ: Takashi Murakami talks about a brave new world of the “superflat” – a world devoid of depth, a world of pure surface. It seems strange that an artist such as yourself who is plugged into the realist painting tradition is also somehow caught up in a superflat and simulacral world … can you talk about this?
AZ: It may be because the reference material used in the paintings are highly mediated images and in a sense abstracted or “flattened” simulacral material, so that is one component of the equation and the translation of  these images through the use of a traditional technique such illusionistic painting , manifests a richly nuanced paradoxical hybrid in the age of digital production, where systems from different worlds, operating speeds and signification are fused together. 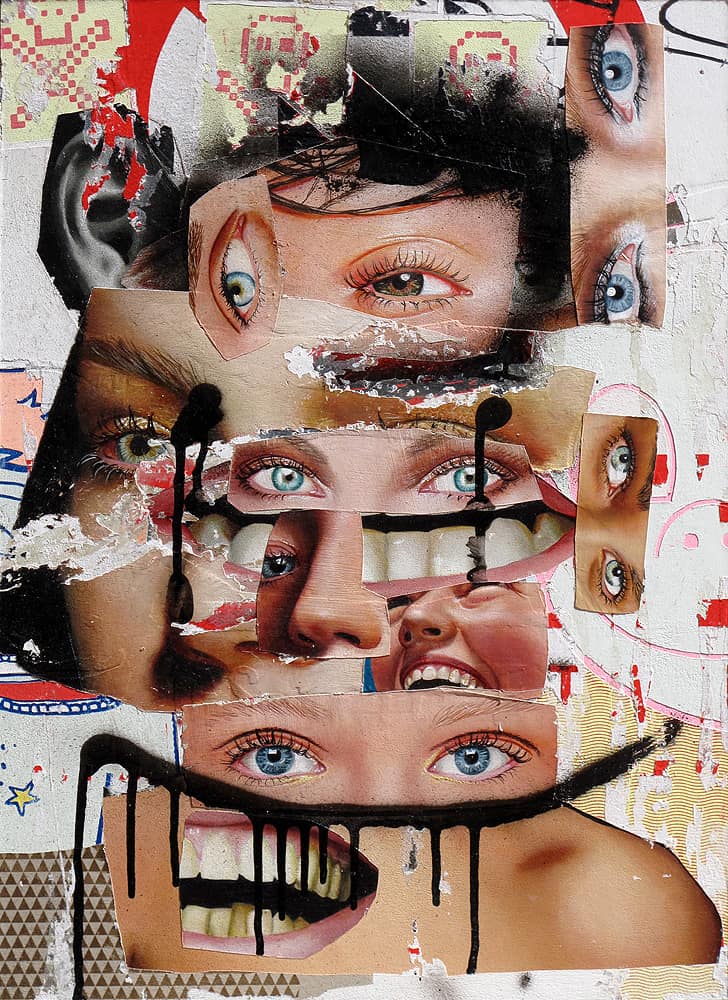