in News Articles 2013
Share on facebook
Share on twitter
Share on email
Share on whatsapp
International band Didier Labb’e Quartet(France) partnered with iKapa Dance Theatre contemporary dancer Mbulelo Ngumbombini to create an exhilarating piece ‘ECHO TO ABDULLAH IBRAHIM’. Art South Africa spoke to Mbulelo, one of the founding members of iKapa Dance.
Art South Africa: iKapa Dance is reinvigorating classical dance, making it vibrant for South Africans from all backgrounds. You’re promoting the work of emerging choreographers, designers, musicians and also creating and nurturing a new, proudly South African brand. So I want to know how you, Theo Ndindwa and Tanya Arshamian-Ndindwa identified the need to rebrand classical dance?
Mbulelo Ngumbombini: Back in time, dance was not very big and patrons and the government mostly funded it because it was a cultural thing from Europe; South Africans / Africans didn’t really know much about it. The moment I was introduced to dance, I was blown away. I was never the boy that wanted to play soccer like the other boys, I wanted something different – so I took it on and saw that there’s so much to it. There’s a life, a career. Someone gave me that chance and now today, I’m doing it classically, classically my way. We actually fuse classical and contemporary.
We merged into a ballet company, but it was limited. And we thought “no man, there must be other ways of incorporating this to make it broader” so we brought our African fusion contemporary side to it. We created our genre, our style of dance. From there we started identifying how we want to merge the classical with contemporary. And it wasn’t too difficult; what I love about contemporary is that it breaks your boundaries. You are able to move an arm, a finger, a hand and it’s just how you move it that talks. It’s the intention behind it, it’s not about making it a step or anything, it’s just the intention behind it.
Can you explain the dancer as an artist? What similarities/ differences are there?
I met these guys (Dider Labb’e Quartet) because art is so broad. They’re musicians, I’m a dancer and my music is movement. The same as them, how they interpret the music is how I interpret the movement. My body is my instrument.
It’s a beautiful collaboration that takes a different angle on it’s own, a simple example: I did it with this show; I did it with them in three cities in France, Toulouse, La Roche and North Atlantis. It was so cool, not restricted- they brought the music and said, “see what you do with it”
Because I’m not much of a speaker, so I speak with my body. It’s honest without any boundaries, what you see is what you get.
We feel like if arts really can come together and be one thing it could actually touch different lives. You are an artist so long as you’re doing something that incorporates art, it needs to respected and be as important as any other art. We are trying to build those channels now so that we aren’t only touching the dance side of art, we’re touching every aspect of art out there to accommodate whoever loves any art. 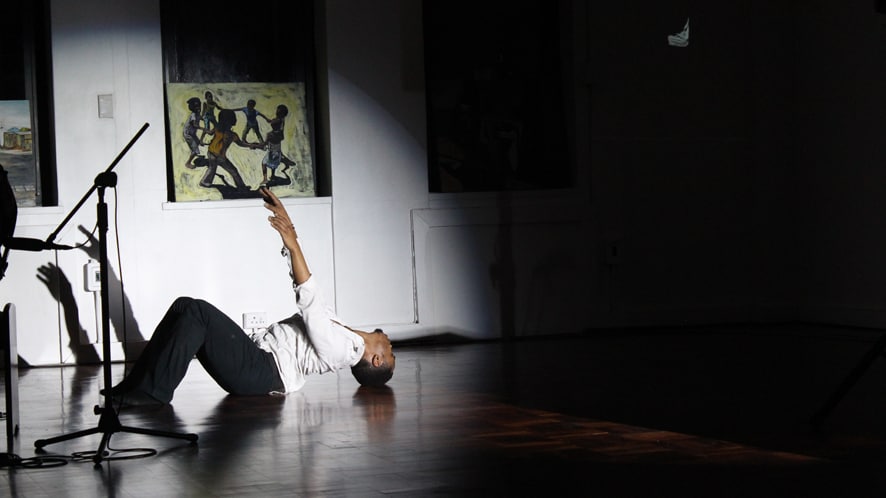 iKapa runs workshops with children, and it seems to involve the idea of “paying it forward.” Your focus on the next generation is inspiring. How does it affect them? I’d like to know about what kind of relationship the kids have with the arts, and how it’s growing as you train and mentor them?
When they get out of school there’s a lack of activities. You come out of school as a kid, if you don’t have any homework you wander around the streets and that’s how they meet these gangsters, drugs and things. But if they have an activity after school, “I’m going to my dance class,” then they skip all the bad things, they don’t have a chance to be exposed.  So, for them to be dancing, as much as they all love it, I can see there are several of them who will be very, very good dancers and there are some who won’t be dancers but they will be something within the arts. We try to give them as many aspects of arts as we can. They have never had the chance of just throwing the toys at them and seeing which one they like.
That’s how I got to this point. Because I took dance and I got to find out that it was my passion, what I always wanted to do.
Can you elaborate on some of the challenges you have faced?
There are many different challenges. We don’t know the parents of the kids we teach, we host meetings to try to meet them but some just don’t pitch. And we wonder how they can just let their children walk out from the afternoon to 10pm and you don’t’ even know where they are. So that shows a lack of support within the home. I end up feeling like we are the babysitters. But it’s a huge privilege that the kids we have, we know they are in a safe environment and they’re learning something.
I also find that the parents aren’t well educated about dance itself. The moment we mention dance, it’s like a hobby. They know nothing about it, so we really try to educate the kids, for them to learn but also to go back and educate their parents, because there is a career, there is a job in it. But you have to be passionate about it and work hard. That’s why people have to search within themselves; do they want to do this? Do they love this? And you can see straight away when someone is in tune with something and they really want it. I’m talking about the kids who never miss a class, no matter what.
I could be selfish, go overseas to dance and earn money, because there’s a lot of funding that side. But I know that what I’m doing for these kids, this organization and myself, no one can do it the way I do it. It’s a matter of believing in this organization, and believing in the things we do. 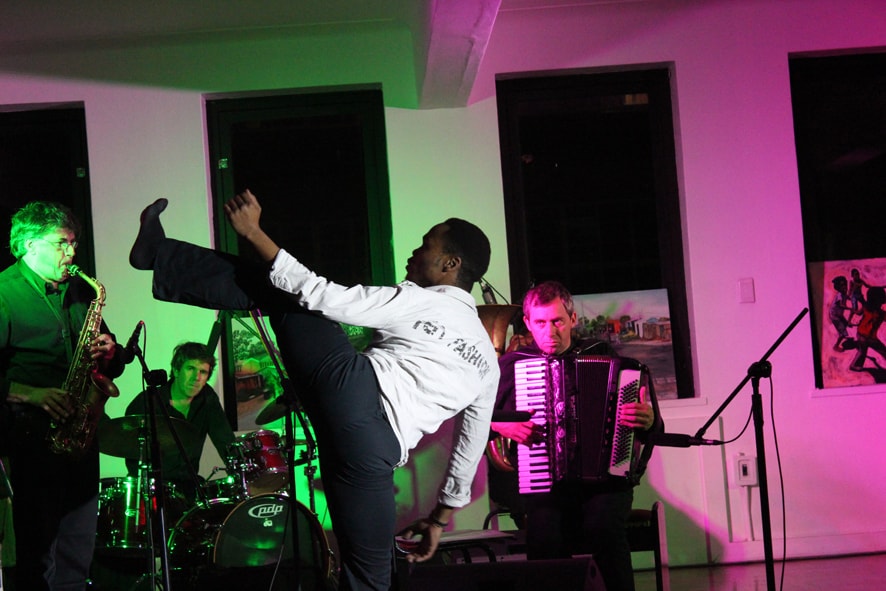 I want to touch on that, the funding overseas. I know for you it’s not about the money, but where does your funding come from? Do you find enough support and resources?
I have these beautiful kids that I teach in the outreach school every day. It makes me sad that from time to time, we have to put them on a break because we can’t afford to have them coming in, because of funding issues and things like that. and When they can’t come in, their sad faces are like torture. They’re just kids, they don’t understand why and as much as you try to explain, they’ll never see the bigger picture. I wish people could see and support that, because I was one of the outreach kids that someone helped to get here today and I would love to do the same, especially just to know that I’m doing it for someone else.
Every year it gets worse and worse. Government is not funding at all; if they’re funding, it’s their friends – I think it’s a huge problem. Art is South African heritage. It really upsets me when I see people with their huge functions in parliament, and they want entertainment but they don’t want to support our industry. I feel like art is what will actually win over things for South Africa. We have a huge lack of education among our youth, but there’s so much talent out there. We can’t ignore it, the more we ignore it, the more we are shooting ourselves in the foot. We have to nurture it, it was necessary two hundred years ago, and it’s necessary today. It needs to be addressed now.
Another major problem is that internally, if we don’t support each other, we’re taking away each other’s bread and butter.
Inversely, what opportunities are there for iKapa Dance?
The opportunity is to really focus on the youth, and right now start grooming and guiding them. To build communities and getting them to work with one another.
So what are you plans going forward? What are you working on now?
At the moment we try do as many things as possible to survive. At this point now, we have all these different things we’re trying to do because of funding basically. We find ourselves doing all this work and a lot of it comes out of our pockets eventually. We don’t want to stop doing what we’re doing, because we believe in it, but we’re not getting the money to survive and do everything we’ve planned.
We’re trying to be stable in one place and focus on exact plans – this is where we want to go, how can we get there? And yes, when you can’t get there one way it doesn’t mean that you’ve failed- you just have to change your ways and look in other directions. So we’re very much new to this strategy that we’re building, trying to get used to it and get into a rhythm.  It’s just man power we need, and of course the resources, funding. If we could have all of that, what we could do in six months is more than two years work for other people. With the funding, everything can be done faster and the way it should be done, without having to cut down. Everything is there, it’s just a question of making it happen, selling it and making it work to our advantage.
Watch a clip of the performance here 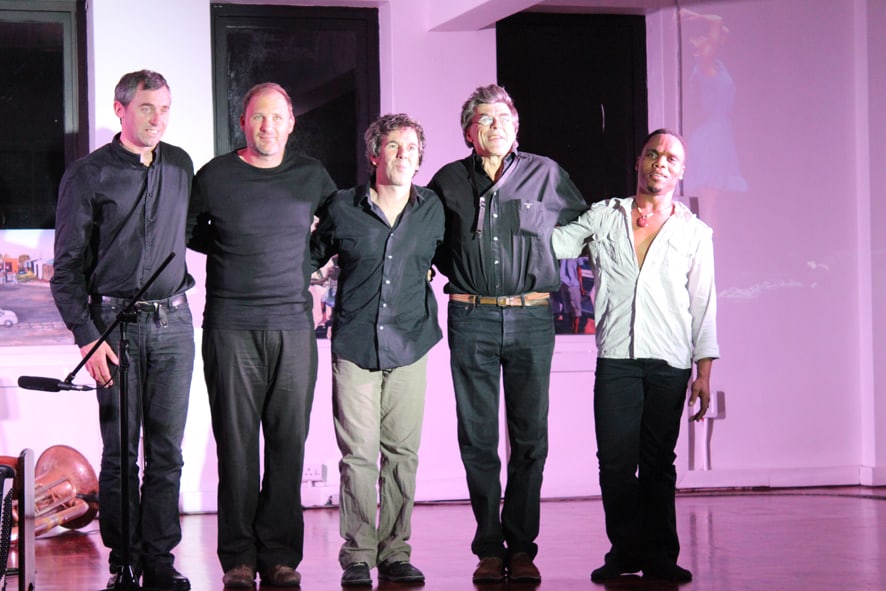