In Conversation with Lawrence Lemaoana

in News Articles 2013
Share on facebook
Share on twitter
Share on email
Share on whatsapp
Art South Africa in conversation with Lawrence Lemaoana, one of the South African artists invited to participate in the ‘Art In Embassies’ events held in South Africa
Interviewing Lawrence Lemoana in Langa, Cape Town.
Art South Africa: How did you get involved in this collaboration?
Lawrence Lemaoana: I met the Ambassador a few months ago, because he was new in the country, at an art meet-and-greet in Joburg, with myself as in independent artist, and artists from other galleries, including Mary Sibande and Sam Nhlengethwa and other artists. America has been really good at promoting an exchange of culture for the last 6 years; they’ve had this programme all along, though it was kind of dormant because they had other political situations to deal with. With the Ambassador being a patron of the arts, he invited us to come speak, have workshops with the students etc., that’s how we got involved.
How does your work, as an artist, relate to the ideas that will be discussed in the exhibition and the talk: Identity, History and Race?
My work has been about questioning the essence of identity, and this idea of researching the meaning of identity; the theory that identity is a myth, that it is constructed, and that people face a material reality that is linked to race, sex and all those things. At the moment, my work deals with ideas of masculinity, and black masculinity within rugby, which is kind of a white sport in South Africa; how do we use art to pinpoint an alternative reality? It fits in well, but uncomfortably well, so I’m always aware of that idea of when something fits perfectly, it is uncomfortable. In a way, the workshop and conversation will aid me in thinking in a more complex way about these issues, and give me a more concrete way of moving forward.
You say you are an independent artists, did you chose not to be with a gallery?
I’ve taken a sort of a hiatus from the art world; I’m thinking about different kinds of methodologies of creation, there is not only one way – the gallery system is not the only way of making work. Right now I’m working on my Masters at Wits, and I’m looking at the taxi industries methodology of survival as a way of creating works. I’m looking at buying a taxi, and trying to insert it into a museum. The taxi industry in this country offers 60% of this country transport, so most of the population relies on this system, but they are not acknowledged formally; I’m looking at those complexities. Tinkering and creating and being an interesting force, without being acknowledged by government or the formal system.
Which this event is the perfect example of…
It is, but for me, walking in to peoples houses, I feel uncomfortable and instrusive; this is someones living space. At the same time, it’s people that put themselves out there, there’s a agency that they have as people. In Joburg we’ve got these kind of projects, Arts on Main etc, and then there’s a different kind of Maboneng; it’s about it art, its about getting the well-off art community into poorer communities, and refurbishing these, there’s definitely a complexity there. But for me, the infrastructure we work on is very complicated from the start. 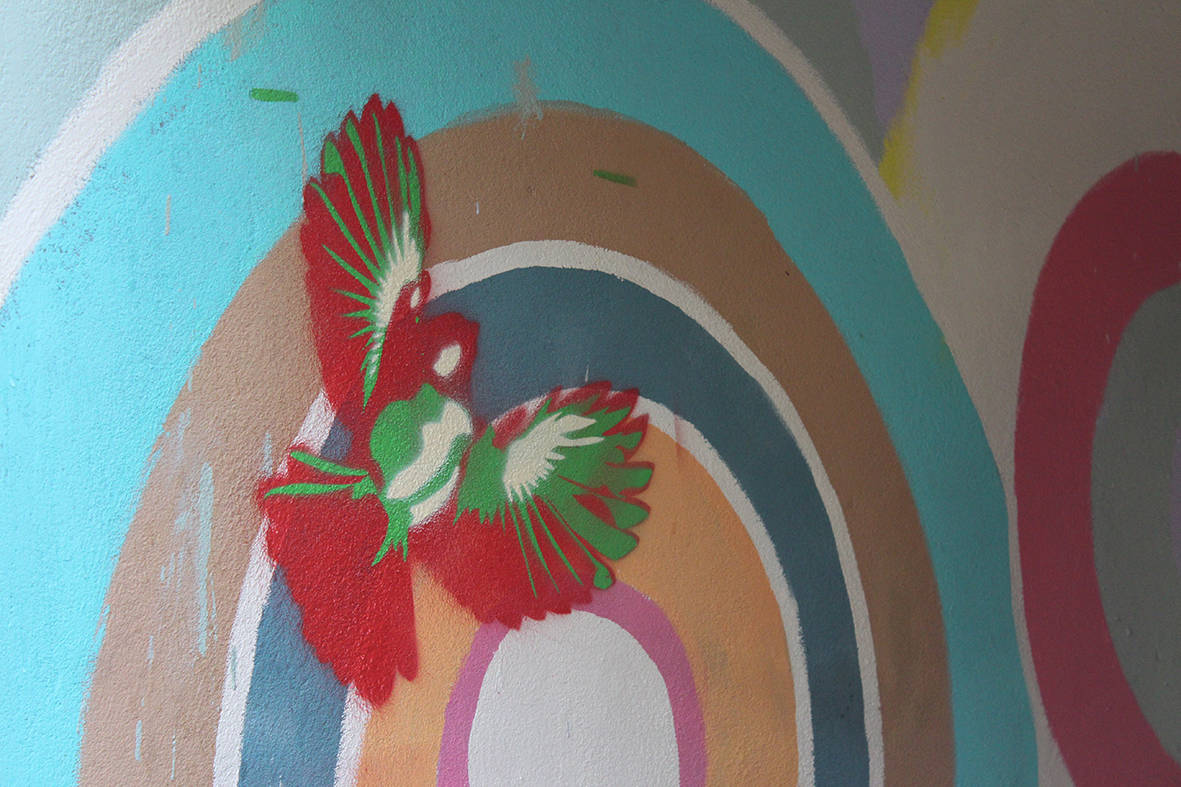 A section of the mural painted on the Langa TAG houses by the artists and schoolchildren. Stencil design by Khaya Witbooi.
What is your view on the established art scene in South Africa and the gallery system you mentioned?
It’s an interesting system and it’s a powerful system. It has it’s issues, it has it’s characters, it has interesting episodes. It’s a really complicated system that has it’s roots in commerce, that’s one of the things we tend to forget. When somebody makes a controversial artwork, it’s not necessarily going to change anything for people who are already educated in the arts. So that complication, that misunderstanding, becomes interesting. When somebody who is not ‘educated’ to see the work., sees the work – what is their relationship to it? It has to do with culture, it has to do with language, it has to do with the already complicated infrastructure of the country. I’ve lost interest in the process of the art world, I’m more interested In the stuff that transforms space, that transforms thinking, I don’t think there’s been enough energy towards that. The white cube is still the white cube, and nobody questions the essence of what the white cube means. Trying to transplant the white cube in somebodies home, it’s like regurgitating the same process just a different pigmentation.
How would you address this issue?
One of the text’s I’ve read recently is Paulo Freire’s ‘Pedagogy of the Opressed’, he talks about this growth that is initiated from a community. It’s not about imposing an outsider education, saying “this is the form that works out, we’re going to formulate it in this community because we have these characters”. The opposite of that would be, how do you communicate with the communities to say, “there are these possibilities, there are these ways of seeing yourself, there are these ways of producing something from the community”. This is one way to go. We are really stuck on the tried and tested, there is this connection with the West, it informs what we are and is actually not us informing ourselves, but in relation to the West. So I’m interested in those kinds of projects, that speak to expression that is from within. 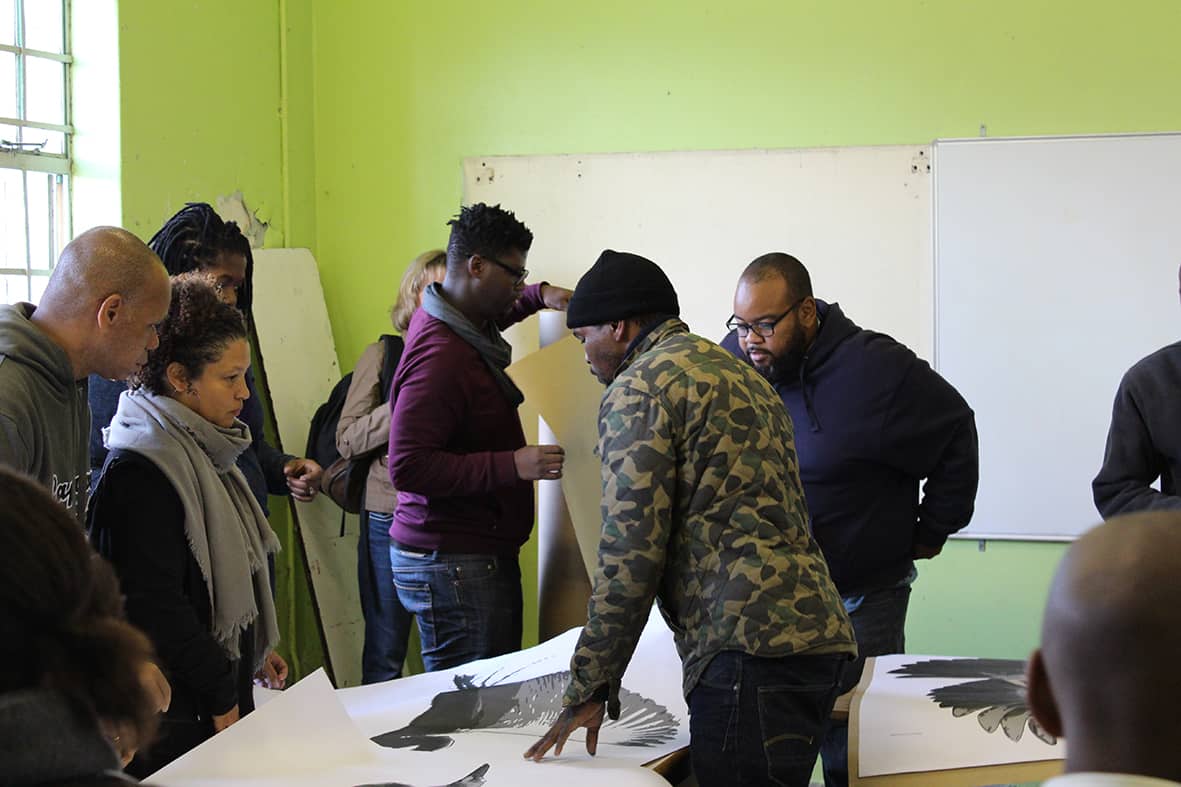 Lawrence Lemoana (middle) working on the stencils for the mural with Ambassador Gaspard and his wife, Raina Washington (left) and Khaya Witbooi and Robert Pruitt (right).
So what are your views on the American Ambassador and American artists who have come down to be a part of this?
We haven’t actually had a conversation, that’s going to be quite interesting. Hank [Willis Thomas] has come to South Africa a few times; when we were invited to the Ambassadors house, Hank was talking about his stuff; in his last exhibition at the Goodman [Joburg], he speaks about the idea that oppression, slavery etc. are the biggest marketed subjects. He looks at images and goes into the archive and unearths that, makes it three-dimensional, or reimposes it in a poster. His way of working is looking at advertising as a mechanism of communication, and questioning it. There are links between the struggle of Americans and South Africans, there are nuances and slight details that are really different. We haven’t really had a deep engagement, hopefully this might put us on the same platform, wherewe can teach each other. Everybody’s learning, which is really exciting.