In Conversation with Pierre Mathieu 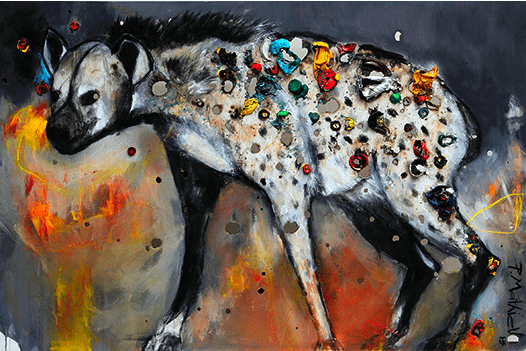 Hunting | 2013. 1300 x 1950 mm. Acrylic and melted plastic on burnt canvas
Art South Africa: Hi Pierre,
Can you explain the title of your current exhibition at the Res Gallery Apocalypse Now, Now!? “Now now” is a distinctly South African term; does the nature of the work relate to it’s South African context? And what do you understand by the term “Apocalypse”?

Pierre Mathieu: This title is a bit of a joke. I am playing with words, between the famous movie title, and the South African notion of emergency, as an expatriate in this country can perceive it. But this titles also resembles me in a way: when I need to talk about a serious issue, I often find a way to escape, and a joke is a good way to do it. What reassures me is that most people seem to be like me. Because of this widespread cowardliness we avoid facing issues, such as environmental ones, that are threatening our very survival at the surface on this planet. We always believe the end of time is not for now… just for now, now. A good way to postpone any action, and to leave the problems for the next generation. In  South Africa several serious issues have been dealt with in the past twenty years, be them social or political; however new environmental threats remain unsolved. Its a new challenge for our generation and the following ones. 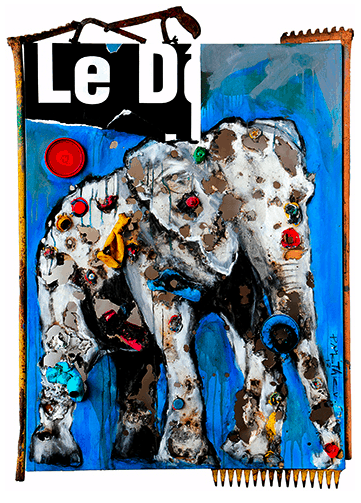 Burnt out | 2013. 1300 x 970 mm. Mixed media on canvas
ASA: Many of the works feature animal figures; what is the connection for you [if any] between animals and the apocalypse?

PM: For the past few years  my artistic work has been talking about the relationship that we, human beings, develop with our times. We live a very interesting period in the history of humanity. A moment of great changes in the geo politics of the world. A moment when the old western world, where I come from, is struggeling to survive as a leading entity. A moment when new forces are emerging. All these changes create frictions and social tensions; crisis and recessions. Also a moment when we start realizing  that scientific progress and technology are also creating negative impacts on the planet that are threatening the survival of life on earth. Animals in my art works represent life and the environment. I am talking about the impact of men on the environment when I burnt my canvases and melt plastics on paintings representing wild animals. It is the confrontation between our modern society and the environment that is depicted in this work. With a potential apocalyptic threat, at some point down the road, for one species or another. 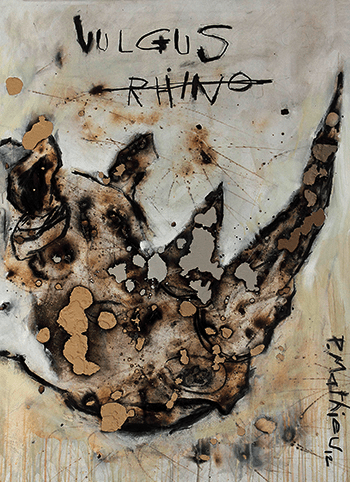 ASA: The materiality of your works are very interesting; can you take us through the process of creating one of your works?

PM: I am attracted by different media and techniques and like mixing them and using them differently to how they generally are used. I have always enjoyed having a physical confrontation with the media I am using. I enjoy scratching, burning, melting etc. materials and using them in my compositions. I also use a lot of recycled materials. I think my work is in between conventional painting, sculpture and installations. For this show I have used techniques such as pasting and melting plastics on canvas, burning canvases, used recycled metal panels on canvases, paper collages etc.
Here is a link to a video where you can see an example of how my work is made:
http://www.youtube.com/channel/UCHMfO-mDcZbXhkMHQmeQNdA 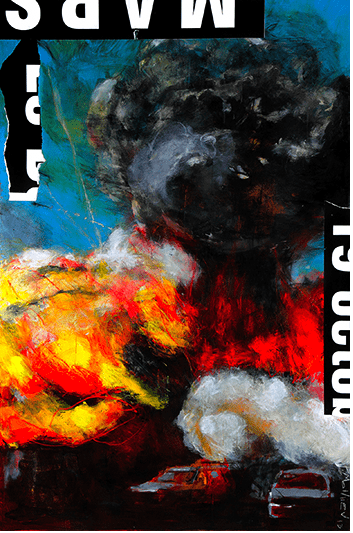 Explosion | 2013. 1950 x 1300 mm. Mixed media on canvas
ASA: You are described as a ‘self-taught’ painter; are there any artists that have influenced/inspired you? How has your work changed/developed since your early days?

PM: My early influences come from artists of the COBRA movement in Northern Europe after World War II. I more specifically enjoyed the artistic freedom of Asger Jorn. I am also a big fan of American artist Robert Rauschenberg for his fantastic capacity to mix media. Cy Twombly and Basquiat have also been great influences to my work. More recently I have also been very interested in the works of German artist Jonathan Meese. I also like the strength of the art of South African artist Marlene Dumas. In France I believe the best young painter is probably Ronan Barrot. I am impressed by his capacity to paint contemporary social subjects in a very classic painting manner. A great painter indeed.
At first I believe my work was more spontaneous and primitive in its expression. Probably the influence of Jorn and Basquiat. I was painting fast,  one painting after the other, as if I needed to throw out something from inside of me. Some twenty years later, I believe I am becoming equally interested by the subject itself, as by the way of representing it. I enjoy painting with energy, speed and strength. Painting is solving problems. It is s a confrontation between the subject, the media and me. Sometimes I find the solution, sometimes I don’t. Sometimes solutions emerge from unexpected confrontations, chaotic situations, unbalances that I create or happen by accident. 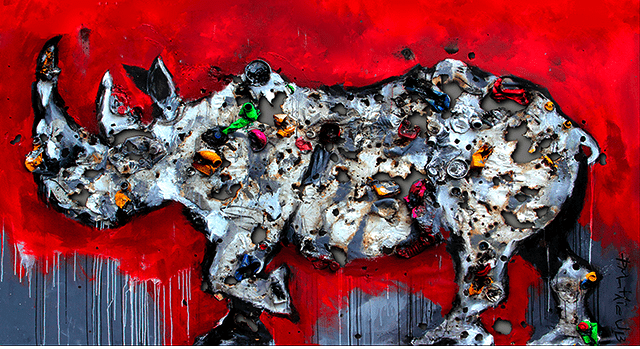 Danger | 2013. 1420 x 2640 mm. Acrylic and melted plastic on burnt canvas
ASA: You’re work clearly has a resonance for a South African audience; being shown at the FNB Joburg Art Fair 2012 and 2013, and with this being your second exhibition at the Res Gallery in Johannesburg. What do you think it is about your work that makes it popular in South Africa? How has your current exhibition been received by audiences?

PM: I think my work has been received with curiosity and some interest every time I have had the chance to exhibit in South Africa. People like the scale of my large sculptures and paintings. One of the reasons for this interest is probably because my subjects are familiar to the viewers, as they come from the actual world in which they live. When I talk about the environment and involve African animals such as Rhinos, people from here understand what it is all about. However this work has also been well received in Europe. I think globalization is creating a common culture across the world in parallel with specific local interests and concerns. The techniques that I use have also been a source of surprise for the viewers, especially the lack of respect I sometimes show for the material I use, when I burn canvases for example. I must say I have been encouraged by the interest and support of South African viewers and I hope to keep building a long standing relationship between us.