In Conversation with Rodan Kane Hart

in News Articles 2013
Share on facebook
Share on twitter
Share on email
Share on whatsapp
Fay Jackson talks to Rodan Kane Hart about his exhibition ‘Forms (S/W)’ at NIROXprojects
Fay Jackson: Hi Rodan. Not knowing very much about architectural theory myself, I am interested in learning more about the concept behind the tectonic drawings and sculptures that you produce. First of all, where does the architectural influence stem from?
Rodan Kane Hart: There are many influences at play in my work as a whole, however my interest in architectural theory mainly stems from formative experiences of growing up very close to the inner city of Johannesburg and witnessing the rapid changes of the built environment. I feel it would be fair to say that, with my father being an architect and urban designer I became more aware of the city than most children of my age. With this being said, the act of drawing, playing with Lego and blocks, and building tree houses and structures was incredibly condoned by my family. 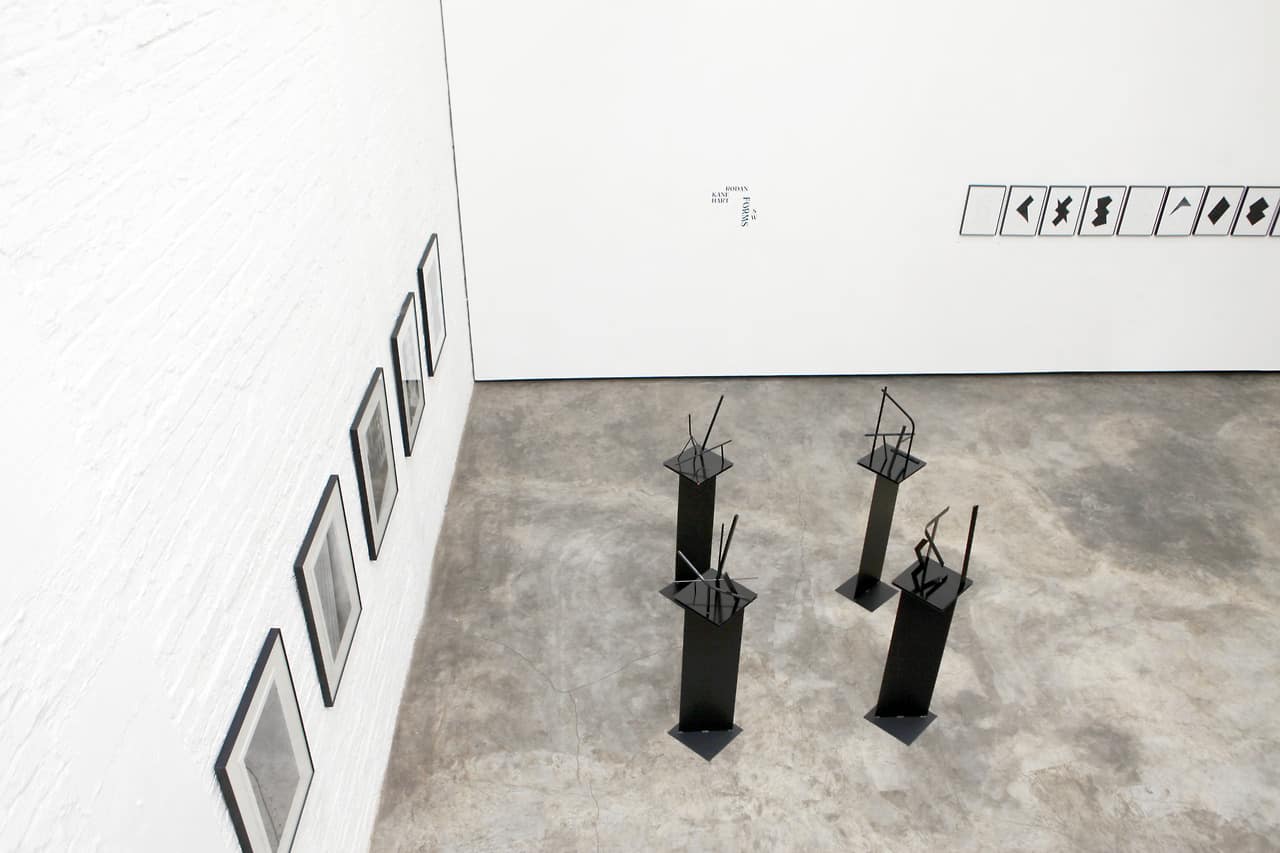 ‘Forms (S / W)’, NIROXprojects. 12-31 March 2014. Installation Views.
Your exhibition of drawings, photographs, sculptures and prints; ‘Forms (S/W)’ at NIROXprojects in Johannesburg CBD, examines the influence of European architectural forms on the urban fabric of South Africa. How do you illustrate this?
This has been a concept that I have explored for a number of years now, and with living and working in South Africa one can’t help but acknowledge past governing ideologies and policies. I see these ideologies best persevered, for better or worse, in the built environment, and when formally analyzing the city one can see the triumphs and failures of history. Whilst on a recent residency at the Yorkshire Sculpture Park in England, I became more aware of British architectural influence in South Africa. For ‘Forms (S/W)’ I presented a series of 12 photographs and 6 drawings, half of which were from South Africa and the other half from England, these works were juxtaposed with one another, which therefore exposed the formal similarities between the two spatial contexts. 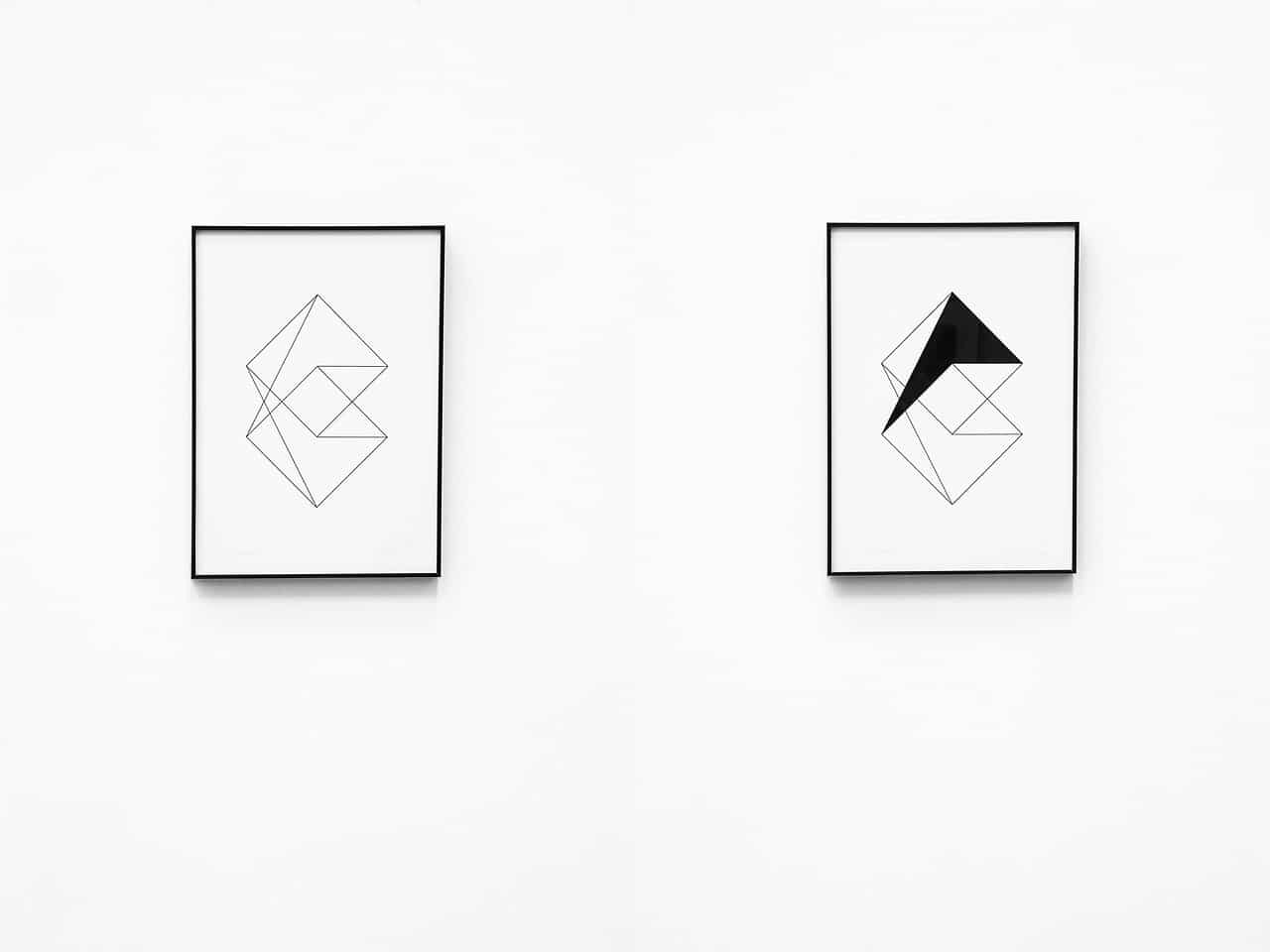 From the series 1-12. Line, Shape to Form. Lithograph Series. 297 x 420mm. Edition of 5. Part of ‘Forms (S I W)’ at NIROXprojects, Johannesburg. 12-31 March 2014.
I found the lithographs quite striking. They certainly possess a distinctive graphic aesthetic, which could be compared to popular commercial illustrations and design work. As the boundaries between art and design continue to blur, would you say that this aesthetic is incidental or is it an intentional approach?
I feel that the graphic aesthetic is both incidental and intentional. I find the logic of design governs most if not all aspects of life. However when applying it in my work, the most logical of all, is the relationship between design, architecture and the human experience. Art and design have coexisted and blurred for quite some time, currently I feel that more contemporary art is bridging this gap as we are living in a disposable age, where devices of communicating ideas and aesthetics need to be much more concise and quickly interpreted, albeit at first impression.
This isn’t your first experience with Nirox Foundation and NIROXprojects. They have previously hosted an exhibition of your sculptures as well as a permanent experiential structure in the Nirox Sculpture Park in the Cradle of Humankind. You also completed a residency there. What has it been like working with Nirox?
My experience with working with Nirox, in short, has been nothing less than great. For those who haven’t ever been to Nirox in the Cradle of Humankind, it consists of a Sculpture Park and Residency program positioned in 15 hectares of a mix of different natural and manicured landscapes. The environment of Nirox offers a great platform where an artist or anyone for that matter can’t help but be inspired. 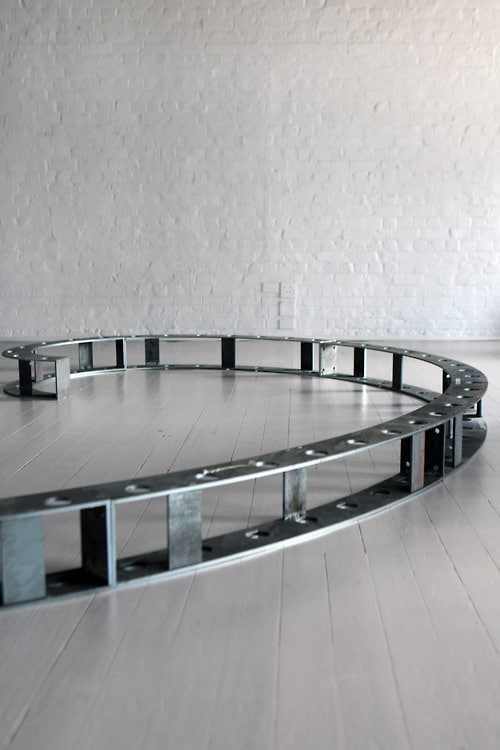 Union. KKW Foundation commission. Public Sculpture for the Netherlands. Work in Progress. Jan – April 2014
You have also been commissioned to produce a public sculpture for Holland, which will be permanently installed in Westvoorne in the Netherlands. Could you tell us a bit more about this?
Union is the title of my public sculpture commission in Holland, The project is a cooperative project between South Africa and the KKW Foundation in Holland wherein three specially selected young South African artists have been commissioned to produce public sculptures for permanent installation in Westvoorne, Netherlands. The selected artists are Beth Diane Armstrong (born 1985), living and working in Johannesburg, myself (born 1988), living and working in Cape Town, and Phumulani Ntuli (born 1986), living and working in Johannesburg. The sculptures are expected to leave South Africa at the end of March and be installed in the Netherlands during the month of April 2014. They will be officially opened and unveiled by the South African Ambassador in the Netherlands.
You have explored the subject of spatial perception within the complex and changing structures of the South African city for a number of years. Having lived in both Cape Town and Johannesburg, how would you compare them? Are there specific ideological constructs or urban forms within either city that you find particularly compelling?
There are in fact a number of ideological constructs that I find compelling, however I would say the most compelling of all is how the contentious histories of both Johannesburg and Cape Town have attempted to be erased with time and by au courant rule, yet these governing ideological leave their marks tangible in the physical make up of the constructed city.
From seeking to understand more about the theory behind your work, I’ve done some rudimentary research. From what I understand, spatial perception is directly related to atmosphere, atmosphere being an immediate form of physical perception recognised through emotional sensibility. How would you describe the atmosphere of a city like Cape Town?
That’s an interesting interpretation, I would say it is correct to link perception to atmosphere, as both possess a tactility in their incorporeality. The South African city, as I feel it is difficult to talk about one without the other, is a complex organism of contentious histories, containing a layering of different social orders, policies and ideologies. As I have mentioned before, I see these layers being very evident and subsequently inescapable in the contemporary city. The atmosphere is one of polarity in the SA city; people are divided and segregated along racial, geographical and economic lines. These divides are incredibly apparent in Johannesburg and Cape Town, perhaps more in Cape Town as the city has only been able to develop to a certain point due to the natural thresholds of the mountain and the ocean, therefore reinforcing and maintaining its past spatial segregation.
As spatial perception is related to atmosphere, so is atmosphere related to place identity. Recently, concerns have arisen about the loss of individuality and distinctiveness between modern cities due to cultural globalisation (as such there has been a movement towards protecting places of national heritage). Much of what is considered worthy of national heritage status in South Africa stems from European architectural styles, and is, as such, a direct reminder of colonialism. How would you say this affects our place identity?
Great question, well, recently there has been much debate surrounding the preservation of historically protected buildings in South Africa, the debate is concerned with exactly what you mention: whose heritage and identity is being preserved exactly? I think this affects our place identity in an enormous way; all South Africans have negotiated spatial logic that is foreign to the context. This encompasses the design of the city, the roads network, pedestrian flow, buildings of function, even the material used for construction. It is my opinion that our cities do not reflect the ideologies of the majority of our population, and as such we are forced to abide by Western, colonial, and foreign logic.
Images from http://rodankanehart.tumblr.com/