In Conversation with Sanford Biggers and Robert Pruitt 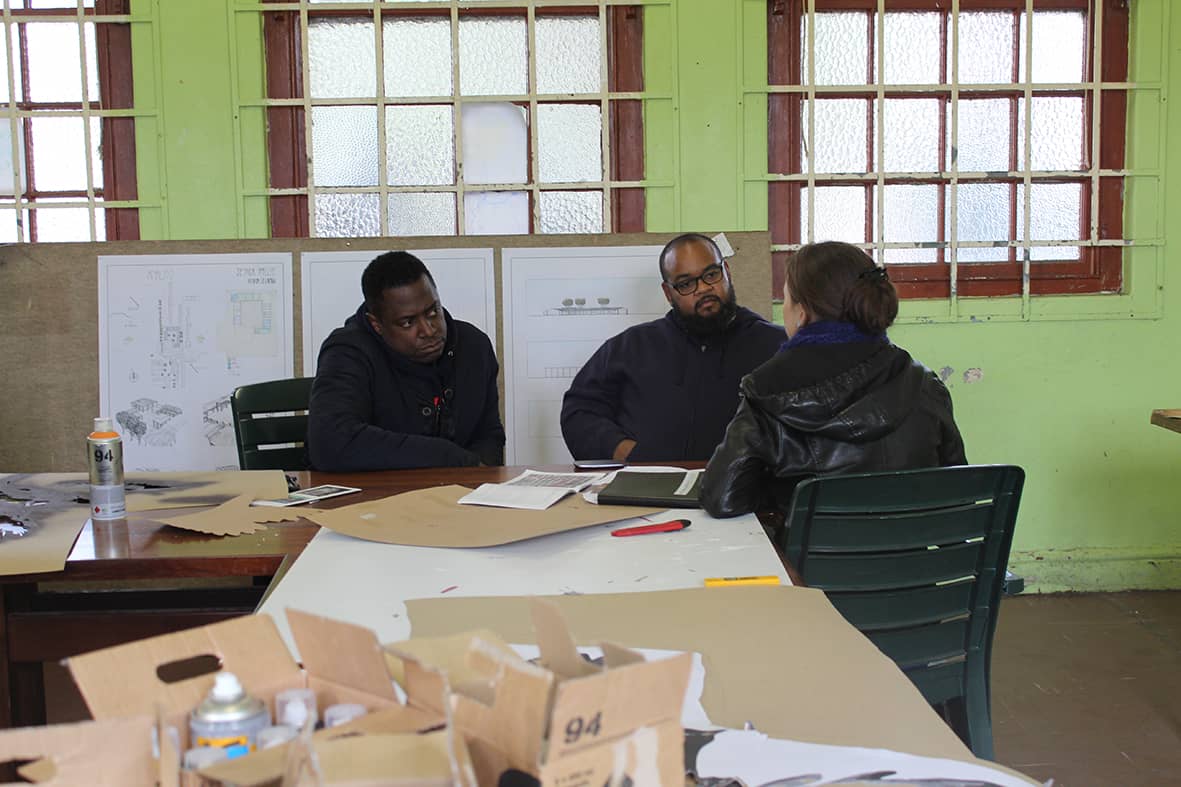 Interviewing Sanford Biggers (left) and Robert Pruitt (right) in Langa, Cape Town.
Art South Africa: How did you come to be involved in this exciting collaboration?
Robert Pruitt: It was through the exhibition at the Ambassador’s house, the ‘Art in Embassies’ programme, we were part of that, and they brought us here.
Sanford Biggers: Part of our tour was to come to Cape Town and do this, and I think we’re speaking tonight [5 June], and we’re doing the same tomorrow in Johannesburg.
And what are your plans after Johannesburg?
RP: That’s our last leg
SB: Everyone goes home. I come back to Cape Town but I think everyone else goes back to the States. I have a few friends here; I flew all the way out here, I’d like to spend a bit more time here.
How does both of your work relate to the ideas that will be discussed in the talk – Identity, Race and History?
RP: That describes a lot of the content, a lot of the things I’m trying to deal with: Identity, how identity is really limited, especially in terms of black people, specifically black people in America. It’s a very one-dimension view, and I try to create images that are multi-dimensional.
What medium to do you work in?
RP: Primarily I make large figure drawings, using conte and charcoal. I juxtapose all sorts of references to hip-hop, radical black politics, history, African sculptures, comic books, science fiction etc.
SB: I work in a lot of different mediums. Recently I’ve started working on a series of antique quilts, where I take old quilts and paint directly on to them, collaging new fabric onto the old quilts – that’s one of the pieces that’s in the embassy right now.
I would say out of the three topics at this point I’m really interested in history, concerning history itself as a medium that is malleable, and history often leads to our impression about identity and race. They often say that history is written by the winners, but I also look at history as being ‘his story’, often somebody else’s story. So my goal is to take aspects of history, like the historical quilts from 100’s of years ago, and then ‘re-right’ (spelt R-I-G-H-T) history onto them.
So, how do you go about sourcing 100-year-old quilts?
SB: The first group I got was from a collector. I was experimenting with one in my studio, I had a few collectors in and on their way out one of them took me to the corner and was like “listen, I used to collect these for many years, I used to sell them, I have books about my quilts, but I don’t do anything with them now, can I give you some?” and she gave me around 20. And that was how I started the series. Since then people have given them to me, sometimes I go purchase them, I’m connected with a bunch of historical quilt retailers – so I get them from a network of places.
Sometimes people get very iconoclastic about things like that, old books for example, or 100-year-old quilts. Does it ever bother anyone that you are cutting up and altering these quilts?
SB: Well that’s part of the historical aspect of it, often these quilts are made by several people anyway, so I consider myself to be a late contributor to the quilt – that’s one way of looking at it. Also there is the act of painting on it, which is almost like graffiti or defacing it, but could also be embellishing it or beautifying it; I’m interested in that tension.
I’m not sure about the extent of your knowledge of the South African art scene, but what are you’re views on the established art scene in South Africa?
SB: I was exposed to a few South African artists probably about 15 years ago, some that I’ve met personally and became good friends with; Siemon Allen is a friend of mine. But from my impression, at least in the larger art industrial complex, it’s very similar to the international art world. When it comes to specific themes, the thing I did like and connected with was a sense of politics and identity – and the complexity of identity – whether we’re white, black, African; the myriad of people here in South Africa, that the message somehow spoke to that.
What drew you to participate in this event specifically – coming to Langa and painting a mural on the houses?
RP: This is part of the schedule, but this place is really great – I really like this place. I’m really amazed by the houses, and the engagement with the people who live here, allowing them to take some sort of ownership over this idea of art.
Did you do the tour of the houses/galleries?
RP: I did, and it’s amazing to me. It’s still modest, but for example the women who gave us the tour, one of the houses is hers and we’re seeing the work. There’s something really amazing when you can bridge that Fine Art world to an ‘untrained’ audience, and then they get to take claim on it. There’s a lot of power in that. I’m really digging this. 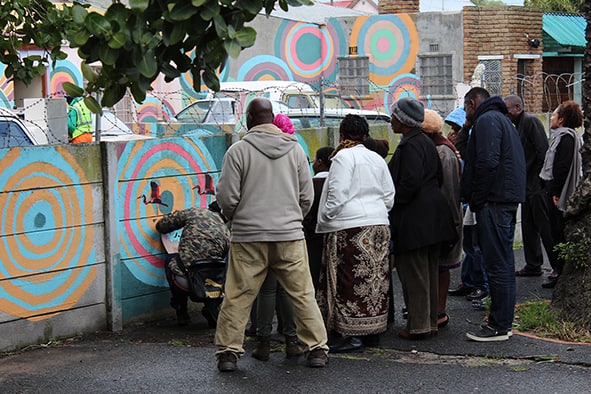 US and SA artists working on the mural in Langa.
How has it been working with the other artists?
RB: It’s been fun, I’m looking forward to doing the murals. I was a little concerned coming in, about how we’re going to work on a mural and not having any sense of what it’s going to be like. I thought it would maybe be a bit of stepping on toes and that sort of thing; but they’ve made it really easy.
SB: I sort of like the idea that it’s a collaboration, and as much as it is about what we might create together, it’s more about us being here, and talking, and sort of bridging the geographical gaps as artists. I like that fact that its not about me, that I can just sort of be here and be a participant, as opposed to being a director, leader or author of it all. I think of it as a service as an artist, it’s good for all of us.