Cycles in 11: Tarek Atoui on his experimental musical forms at the Sharjah Art Foundation

Marking over a decade of collaboration with Sharjah Art Foundation (SAF) and the surrounding community, Tarek Atoui’s exhibition ‘Cycles in 11’ centres around experimental and innovative musical forms and offers audiences opportunities to learn about and explore instrument-making, compositional structure and musical collaboration.

The works in the exhibition, developed over the last 11 years, represent the culmination of the artist’s ongoing exploration of different methods of listening, composition and performance. The instruments Atoui has created are the product of extensive research into music history and tradition as well as collaborations with different experts. Challenging established ways of listening through innovative approaches to sound, the instruments also build on the artist’s earlier project WITHIN, which grew out of years of work with Deaf culture. This project, originating in Sharjah, investigated how deafness can influence the way sound performance, space and instrumentation are understood. 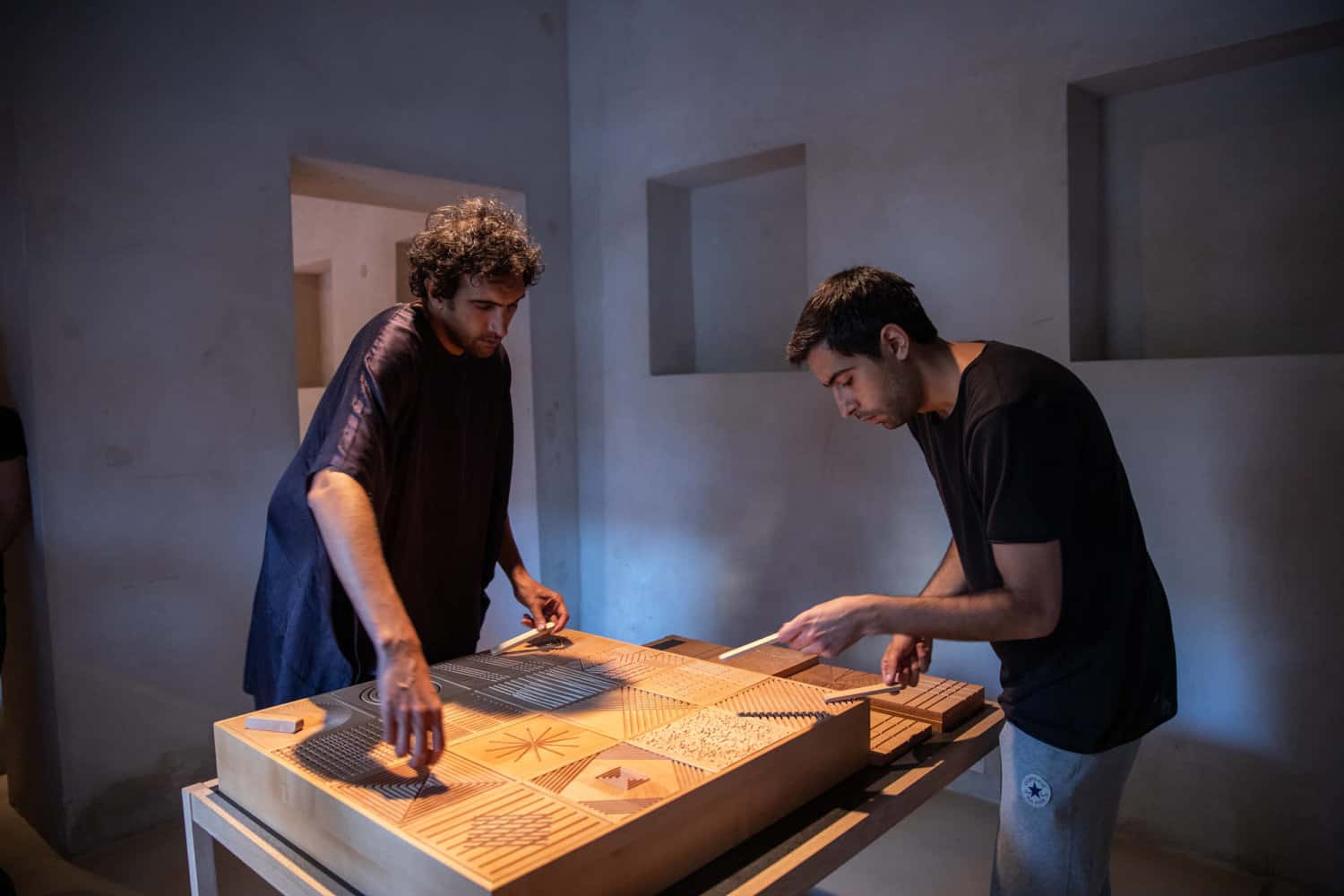 Brendon Bell-Roberts: Before 2008, you were working primarily as a musician. However, it was your project Empty Cans – that was the catalyst that opened the door to the art world for you. Can you tell us a little about the project and how it led to your invitation from the SAF to participate in March Meeting, 2008?

Tarek Atoui: Empty Cans was a workshop in which I built educational tools/software. It used PlayStation joysticks and Wii Remote controls, at that time, to play sound and video. The work led to a workshop with teenagers in France, Cairo and several cities in the Arab World. The workshop was also held in several refugee camps in Lebanon between 2005 and 2006. During one of my Amsterdam workshops, I had the privilege of meeting Jack Persekian (Former Director of the Sharjah Art Foundation), who invited me to collaborate with the Foundation.

This connection led to your first art residency and subsequent presentation of Un-drum/Strategies of surviving noise at Sharjah Biennial 9. What was this experience like for you as a creative, and how did it change your practice outlook?

Un-drum/Strategies of surviving noise, if I can retain something from it today, started my relationship with outdoor and public spaces. It was an important transition in my work, from using digital instruments and software to conceiving and building material hardware. It was my first one-of-a-kind experience with building instruments, especially this big interface and controller of sorts. I moved away from electrical sensors and software and started thinking about the playability of things and the body’s place within the work – how the body interacts with this playability. 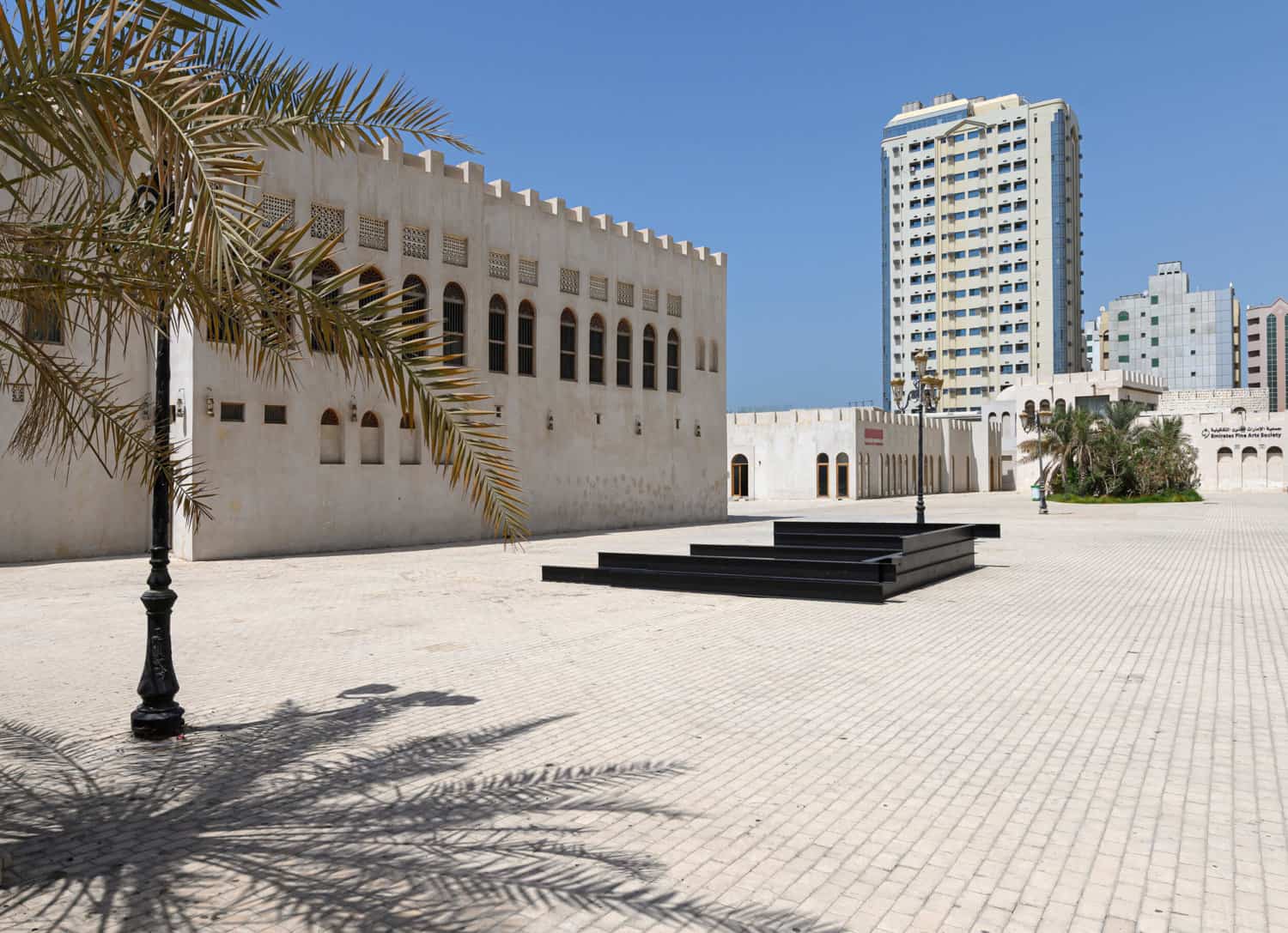 I/E, 2020. Commissioned by Sharjah Art Foundation. Courtesy of the artist.

“Touring the world from one harbour to another since 2014, I/E is visiting cities that thrived because of their harbour and maritime activities.

In such places, harbours represent their cities in a particular way. With strong connections to their cultural, social and economic realities, the harbours’ sounds reflect the past, present and becoming of these places. The I/E project has recorded sounds from the harbours of Elefsina (Athens), Abu Dhabi, Singapore, Porto and Beruit. Sounds were recorded from below the surface of the sea and inside materials such as metal, stone and wood. A continuously growing sound library, consisting of sounds from underwater areas, industrial and human activities, natural reserves, fish markets, military bases and oil tankers, among others, has been progressively emerging from the process.

In Sharjah, Atoui presents the iteration of I/E that was recorded in Abu Dhabi following his participation in Durub Al Tawaya (2017). During this period, some of the locations Atoui and sound artist Eric La Casa recorded were the Zayed and Khalifa ports, the fish market, the fish auction and the mangrove. In Port Zayed, La Casa recorded the sounds inside stacks of metal rails used in construction projects. Atoui is using the same rails outside Bait Al Serkal, connecting them to Abu Dhabi’s sound capsule located inside the house.” – text from Sharjah Art Foundation publication on the exhibition. 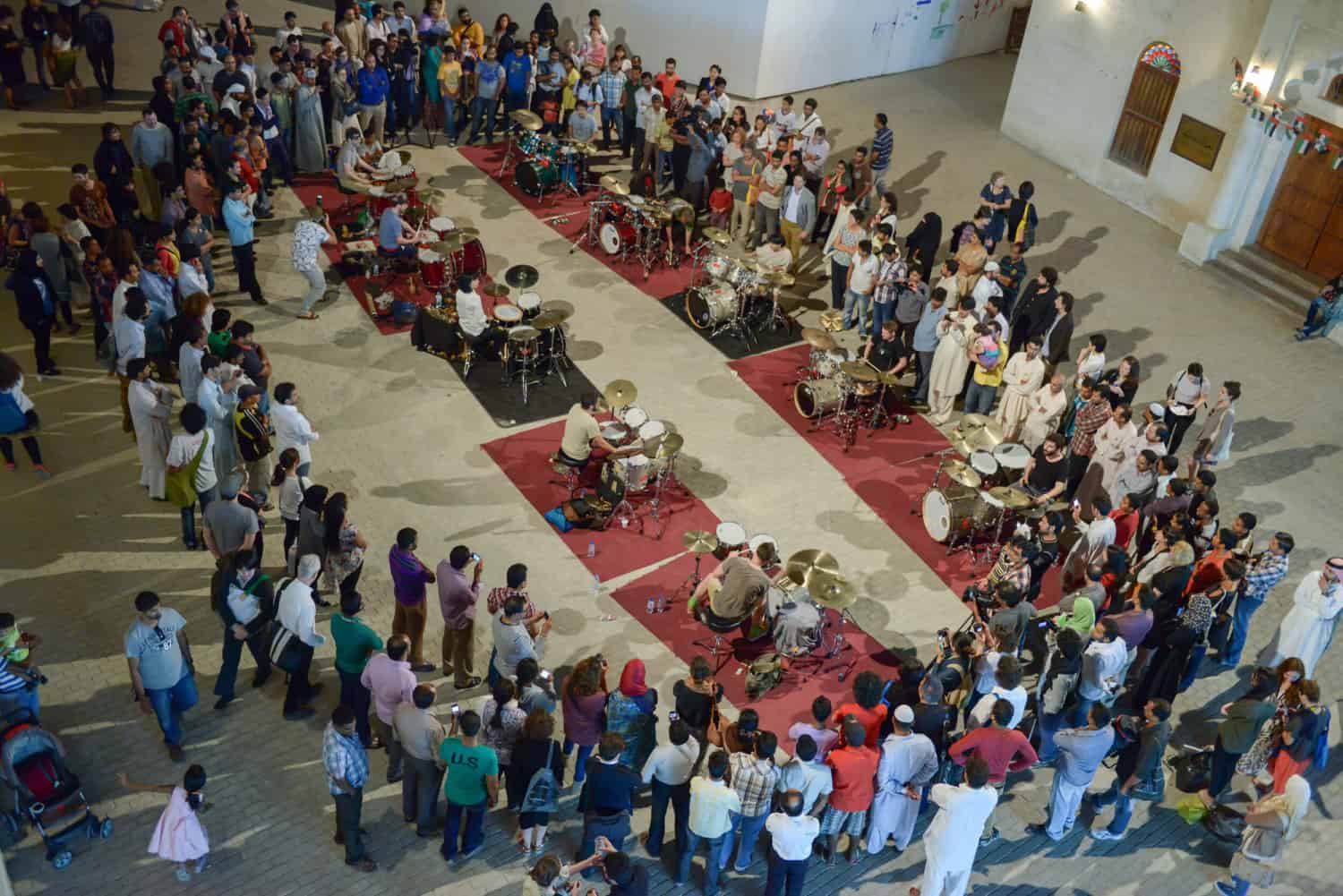 Your ongoing collaboration with the SAF has seen your practice and its impact on the contemporary art world grow and flourish globally. What have been some of the noteworthy developments and moments during this collaborative journey since 2008?

The most notable moment was WITHIN; it started in Sharjah as a project with Al Amal School for the Deaf. The project WITHIN was an entry point to unbelievable depths, many yet for me to still discover. Connecting with the Sharjah Art Foundation led me to work with classical Arab music and revisit the Dahlem Sessions and collaborate with Kamal Kasar of the AMAR Foundation, Lebanon. There is still a lot for me to learn and many areas of possible development. These projects will stay with me for a long time.

“WITHIN  investigates how deafness can influence the way we understand sound, sound performance and concert situations. The work also questions the act of listening and the way we build instruments, conduct, improvise, write scores and relate to an audience.” 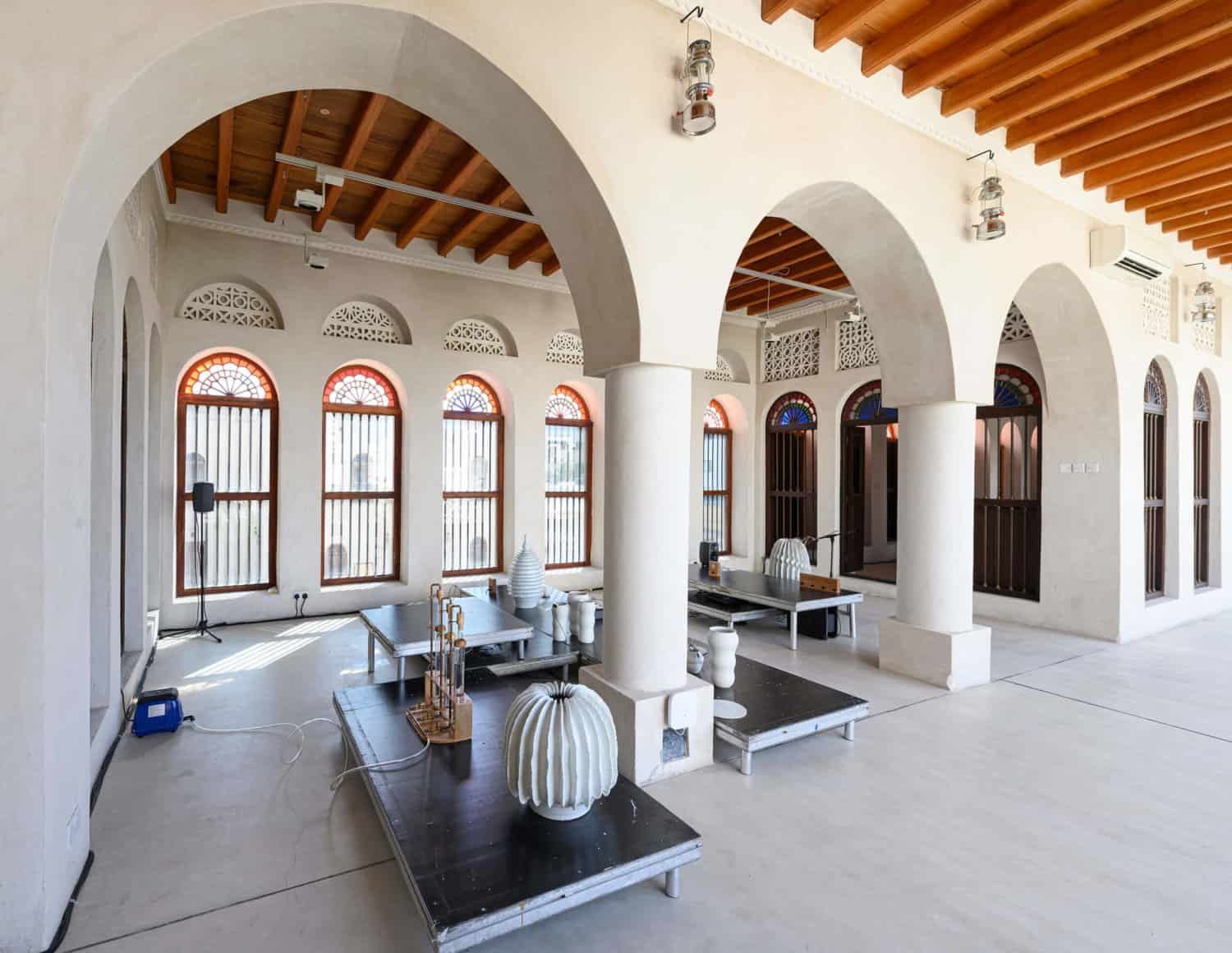 The Ground, 2020. Courtesy of the artist and Vitamin Creative Space.

Early on, you realised how sound could reach out to diverse groups of people and federate or gather them in a different way from the usual methods of communicating with audiences.

Given your interest in education – and your work with youth and children, universities, and ultimately becoming an integral part of developing the sound, performance and education programmes for the Sharjah Art Foundation – why is this aspect of your practice so important to you?

I don’t believe in the role of education alone. I think in terms of art and education, and both combined. In today’s world, standing for education and believing that everyone should have access to a high standard of education is a goal worth fighting for and aspiring to.

I was fortunate enough to be in Dubai during the lockdown and got to see your show ‘Cycles in 11’ at SAF. What struck me was the exhibition’s scope and scale and how it enveloped every conceivable surface and space of the Bait Al Serkal Arts Square. What was it like to see these works, spanning more than a decade of making, in this one exhibition and space?

My ideas around the exhibition started in 2016, and I was familiar with Bait Al Serkal. And I would say I made some of the works with the intentions of the land of Sharjah. When everything was complete and came together, it felt like a significant composition or symphony. It was very fulfilling. The installations also had this mysterious charm, of this abandoned castle, you know or abandoned fortress where all the humans have left. The instruments and machines stayed playing on their own and making their music. That is how it feels today, after more than six months of the exhibition. There is a space, which leaves a lot of room for its visitors. 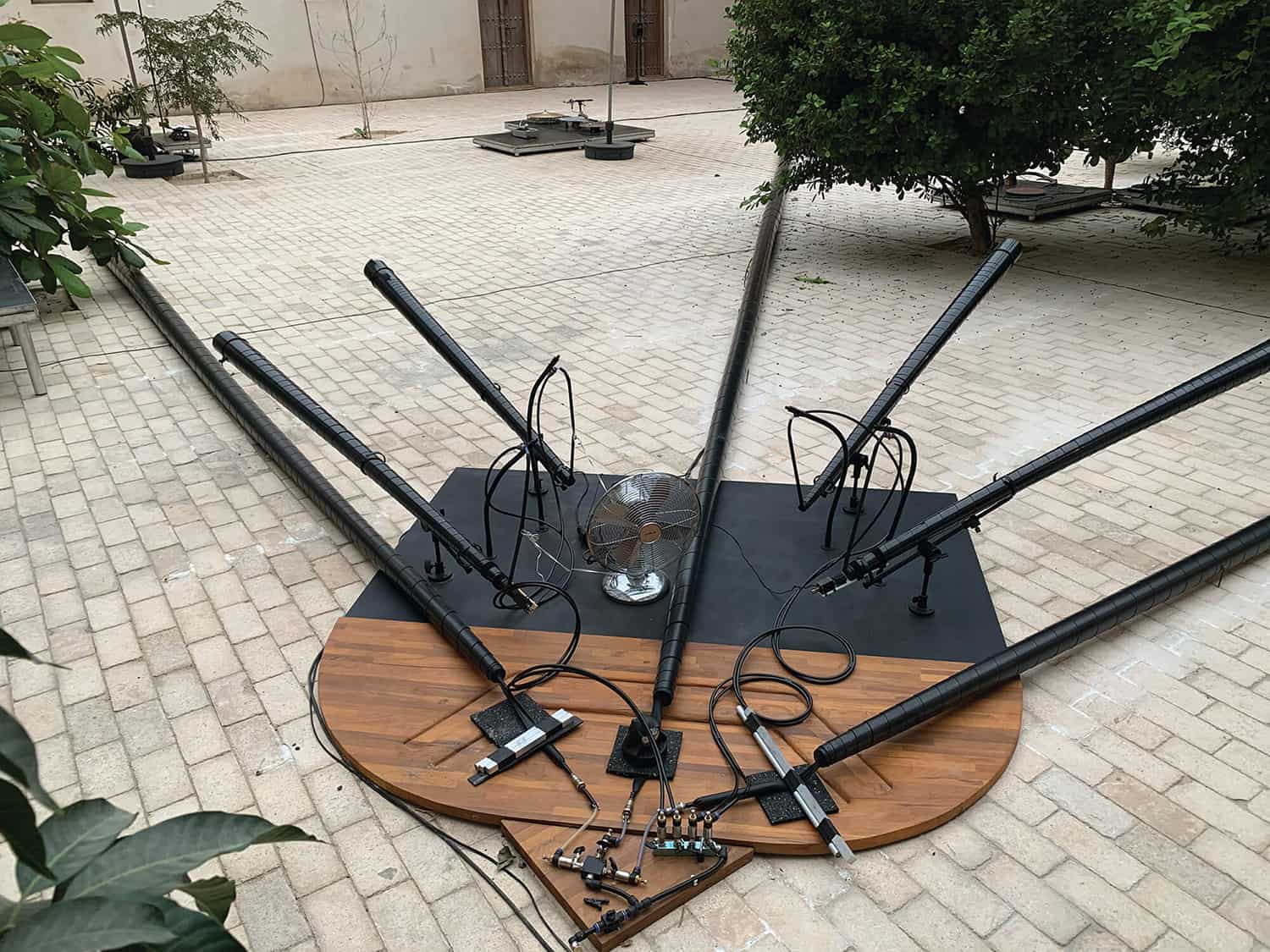 The Wave (detail), 2019. Courtesy of the artist and Galerie Chantal Crousel.

As part of ‘Cycles in 11’ is a residency programme running from 17th January – 23rd March 2021. How has the COVID-19 pandemic impacted the residency and your expected outcomes?

The residency for ‘Cycles in 11’ and the human interaction aspect has been challenging. It wasn’t easy to invite residents and the public to interact with this project. Even in Kalba, it was tricky as well. Asking schools and collaborators from Sharjah to participate was very difficult. It’s a pity. After this exhibition, I hope that what remains from ‘Cycles in 11’ will allow us in post-COVID times to come up with a programme that has the components and the ambitions of what’ ‘Cycles in 11’ had intended. At least with the March Meeting 2021 coming up, there will be some more activity around the exhibition which will be open to the public.

‘Cycles 11’ was on view at the Sharjah Art Foundation in Bait Al Serkal, Arts Square, from the 19th of September until the 10th of April 2021.