In Conversation with Tony Elvin 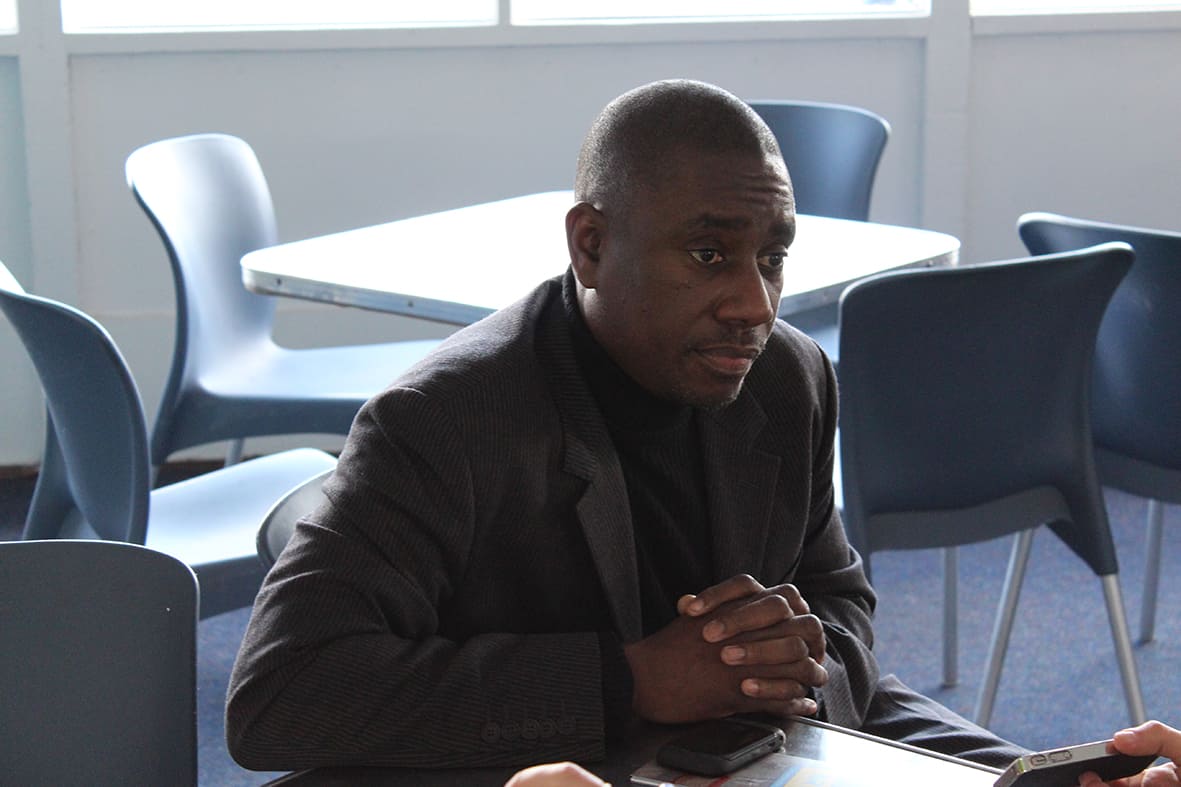 Interviewing Tony Elvin in Langa, Cape Town.
Art South Africa: You spoke about the TAG and the Langa Quarter just now, but could you elaborate on how the TAGs have influenced the township and the Langa Quarter specifically?
Tony Elvin: The Langa Quarter is essentially meant to be this background brand, which is like the destination, it’s the place to go. The idea was that we would create this destination which has (within it) really inspirational, interesting draw cards and we couldn’t have chosen more spectacularly than with the Langa TAG. What was nice about the stability of the Langa Quarter was that we could foster galleries in permanent homes, rather than a temporary art gallery or an art route. So this was one of the first of the permanent galleries, because of the stability of the Quarter, and it’s been a quintessentially perfect partnership. Both Siphiwe and I are dreamers of note and we have heart- we go for things, we’re very emotional and passionate. I think you’ve got two really nice projects that support each other really well and so we’re attracting a lot of interest as Langa Quarter and iKhaya Le Langa. Equally Langa TAG is attracting a lot of interest and so they’re of the same weight and together they’re unstoppable.
You’ve said in previous interview that you see a vision where “Capetonians will finish their day in Camps Bay or at The Waterfront on a Sunday and come into Langa to listen to some Jazz.”  I’d like to know how the harmony between the TAG and the Langa Quarter is furthering that vision?
I think, when people start reading in the newspaper that, you know, Patrick Gaspard, the American Ambassador is here and two months ago we had this café opened by the Norwegian President, that international people, non- black people if you want to blunt about it, come here and they’re perfectly safe- we start opening up that whole discussion about why people don’t come here. I have some views about why this state exists and the way it does in the country. I think people say they’re fearful, but within the fear piece I think there’s other stuff happening. I think the large majority of people are genuinely fearful, they’ve heard stuff and want to protect themselves, but I also think that within that fear piece there are people who don’t want to come together, who don’t want change and use that to further their aims. I’m a big believer that the opposite of love is not hate, it’s fear. And the one thing that overcomes fear is desire. So if we can create something really desirable and really cool, people will move towards it, rather than us protesting and saying “this shouldn’t happen, that shouldn’t happen.” And with what we’re doing, and what Langa TAG is doing- what we offer and having some big cool brands on board- all of a sudden you’ve got to get with programme and get where all the action’s happening.
I think that’s ultimately going to win Capetonians over. They want something new anyway, I’ve been here long enough to know that the offering is all sort of plastic and under mall roofs. You want something authentic.
I think that we can see that trend already emerging in the City, in places like Woodstock, or Gugulethu and Mzoli’s, places that were once somewhat unsafe and people wouldn’t consider going to?
One of the challenges the city has is this separate development which is still happening, and so, the thing about Woodstock, and I like Woodstock, but the problem is that the property is still in the hands of the same demographic and so in an area like Woodstock is that the kids of the parents who own the property get an advantage, and areas which have a lot going for them, like Langa does, get left behind. Even The Biscuit Mill, which I used to like going to, has now become a bit like a little twee thing you’d find in Europe.  And I think, we’re in Africa man, let’s here some jazz, let’s get some different foods you know? 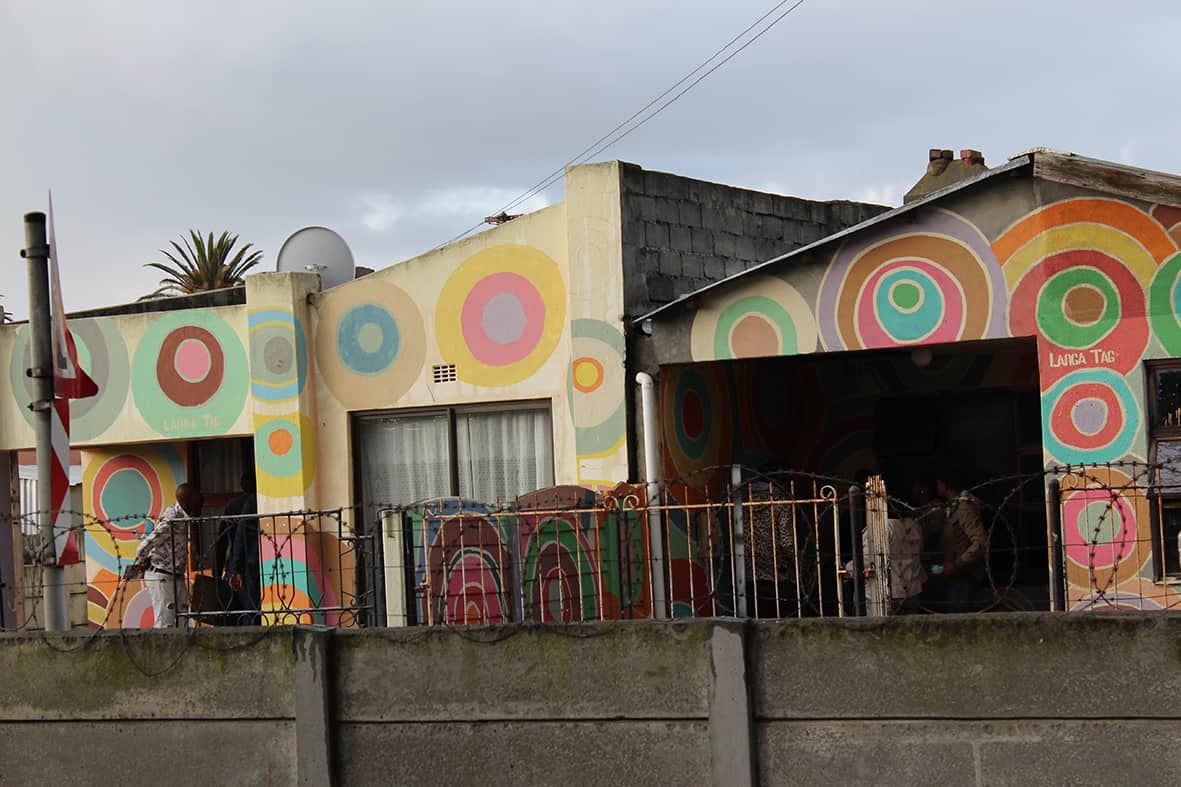 Langa TAG houses
Speaking of Langa and it not getting left behind, and the big brands that are now getting involved here, I want to know about the opportunities, and the relationship between the brands, the new interest and the enterprise that’s growing here. The TAG also presents a new business model, so can you tell me a bit about the relationship that’s developing?
There are three elements to this. There’s iKhaya Le Langa, this hub- that is essentially a destination in itself. It will be a business incubator but we need relationships with big brands and corporates with their enterprise development strategies who are looking to grow business. So they support this facility and offset that against their broad- based economic scorecard points.
Then we also have the Langa Quarter, and that’s a Social Enterprise Development Zone, and it’s an environment that is conducive to growing business, so smaller, local businesses are growing in a supported environment. I’ve been working in Langa, one of the challenges I’ve found can be explained with the example of Sikamba B&B. The owner is a great, hardworking woman with this great B&B, and they ask her to do all these training programs, take her out of the community, and send her somewhere else. They train her, some consultants get some money and then she comes back home and then there’s running dogs everywhere, there’s broken glass, the smell of urine. Businesses don’t grown in that environment. So they’re wasting money, the State is wasting money. Unless you take an area and do what they did to down town- make it cleaner, greener and safer, in the same way you’d approach a shopping mall or anywhere else you want to develop, make it cleaner, greener, safer and stop messing around. So this is what the precinct is. It’s creating a high- end benchmark in a township that says we will approach it in the same way we approach any other area if you value and respect it. And it is about valuing and respecting an area. Once you do that, the community can buy into that because they see that there’s a vested interest in working together and making in cleaner, greener- and things will grow. And this facility here, the iKhaya Le Langa Hub is the engine for that, supported by big brands. So big brands come on board here- we partner with big brands looking to get their enterprise development points with smaller businesses in the community, so the relationship is through enterprise development.
We don’t want corporates coming here and getting lawyers and accountants to paint toilet walls. Organizations here could probably do with some legal advice, and a bit of accountancy on a monthly basis. Stop all that nonsense, it’s patronizing and not useful. If you want to paint the walls in crèches, start a little community business, create some local employment and let them paint thewalls. It’s weird and it’s basically big corporates setting the agenda. So here, corporates can come and partner with us, on our terms. 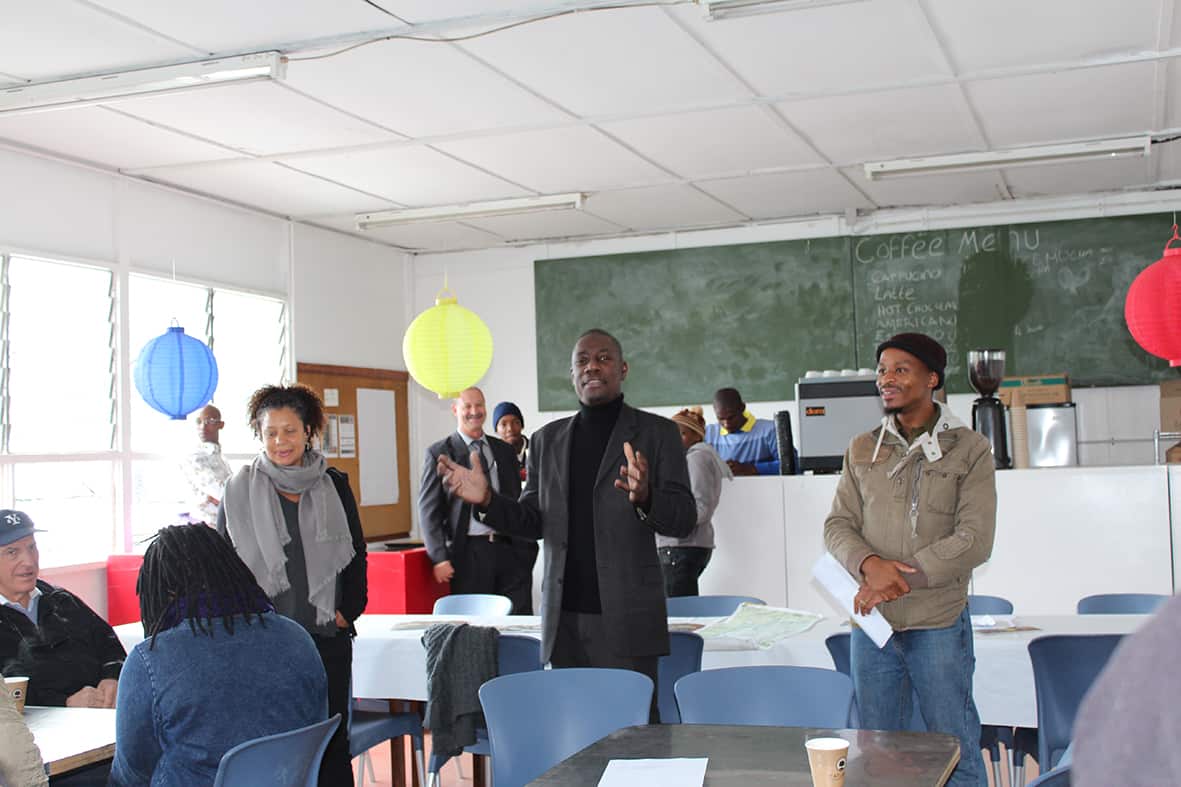