In Conversation with US Ambassador Patrick Gaspard

in News Articles 2013
Share on facebook
Share on twitter
Share on email
Share on whatsapp
Art South Africa in conversation with US Ambassador Patrick Gaspard on the events surrounding the arrival of his new collection, part of the ‘Art in Embassies’ programme: a hands-on mural project with US and local artists and residents in Langa; and a conversation about identity, race and history in contemporary art. 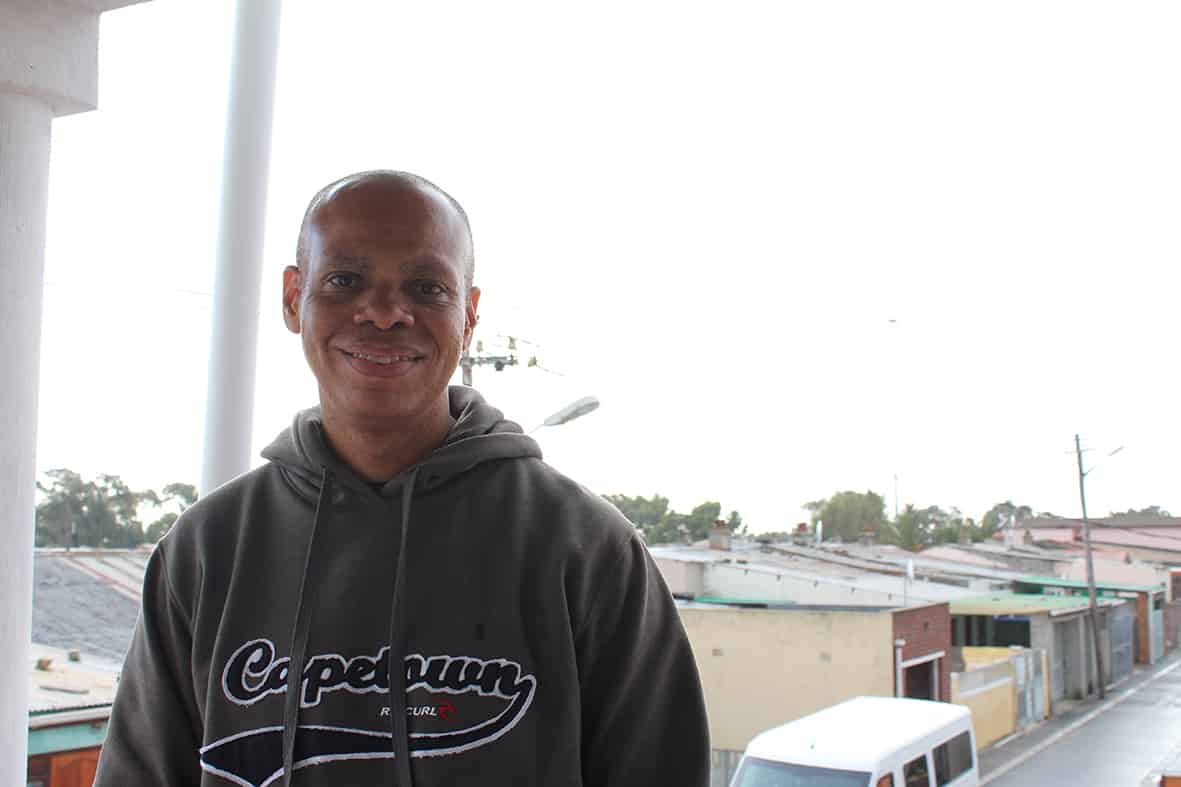 US Ambassador Patrick H. Gaspard in Langa, Cape Town. 5 June 2014
Art South Africa: Can you tell us about your interest in art, and specifically your Collection?
Patrick Gaspard: My interest in art is lifelong and it certainly precedes my Ambassadorship. My connection to South Africa started not only with my Ambassadorship but through the arts as well; when I was a teenager I was very active in the anti-apartheid movement in the States, and like many other Americas I got to get a sense of South African culture through artists; first through musicians but then through visual artists as well. It gave me a sense of what was possible in visual expression, and there were artists like Gerard Sekoto for instance, who, in very dynamic ways, gave a sense of exactly what was happening to the working man in this country in that period of dislocation. That seized my mind and provided inspiration, and informed my involvement.
What artists are represented, and how do you go about selecting works that will become part of the collection?
There are so many artists there who have been long favourites of mine, people like Glenn Ligon, Sanford Biggers (who I’m a huge fan of), Carrie Mae Weems; some amazing artists who have always moved my spirit. What unites those artists for me, is that they have taken bits of their autobiographies, bits of all the places they’ve travelled, bits of the African-American experience and the African experience and its diaspora, and they’ve told stories in new and innovative ways. I though that spoke to the spirit of art that we see here in South Africa, the direct relationship between the kinds of things that Mary Sibande and Nicholas Hlobo do, and people like Blessing Ngobeni, that spoke 8000 miles across the Atlantic to these artists. I thought it would be interesting to bring them into convergence.
Was your choice of which South African artists to include because of their relationship to the American artists?
I wanted to – as much as it was possible, this is an imperfect thing – use cultural diplomacy to demonstrate the ways we have shared values, a shared history of struggle, but also shared aspirations as well, and I thought these artists manifest that and give real expression to it.
The collection is described as exploring “identity, culture and agency over historic narrative.” How do the works in the collection explore these ideas, and how do you think these come across to a South African audience?
All of these artists are, by nature, interrogators. I think that they ask some really tough questions about who and where were are, and the growth we are marching towards, and it all happens at this really interesting time. We’re at the 20th anniversary of true participatory democracy here in South Africa, we’re at the 50th anniversary of the passage of the civil rights act in the United States, which opened up our imperfect union to more and more Americans.
That historic convergence is absolutely represented in Glenn Ligon’s work for instance. When he takes the language of James Baldwin and makes it as opaque as possible, he is saying something  about the pilgrimage that African-American’s have gone through. He takes an essay by James Baldwin, about an experience that Baldwin had when he was in the 1940’s in a Swiss village. He was the only black person there, he was the stranger walking amongst them, and it did something to their sensibilities and to his as well. Ligon takes that language and he obscures it and makes it opaque, there’s an urgent questioning in that. We placed it right next to a wonderful project by Glenn Ligon and Sanford Biggers, where there’s this interesting Harlequin kind of figure, a ‘Papa Legba’ figure, who is half black, half white; walking a razor-edged line between two dimensions. All of that is in ready conversation with Mary’s piece, her Transformation Series. Like so many others, I learned about it during the 2010 World Cup, when they were blown up to epic sizes, and seized my imagination. Given my personal history where my mother served as a nurses aid and a domestic – she was somebody who had to educate herself, come to a new country as an immigrant, learn the language, emerge in this new America as this new woman. Sibande’s work absolutely spoke to me, and I thought it was lifting up my mother’s story and my grandmother’s story, and the history of my daughter’s story, who inherits all of that but has a world of opportunity in front of her, not unlike the post-apartheid generation here. All of those connections were just singing off of the canvas, and I thought that these were great ties that bind us. 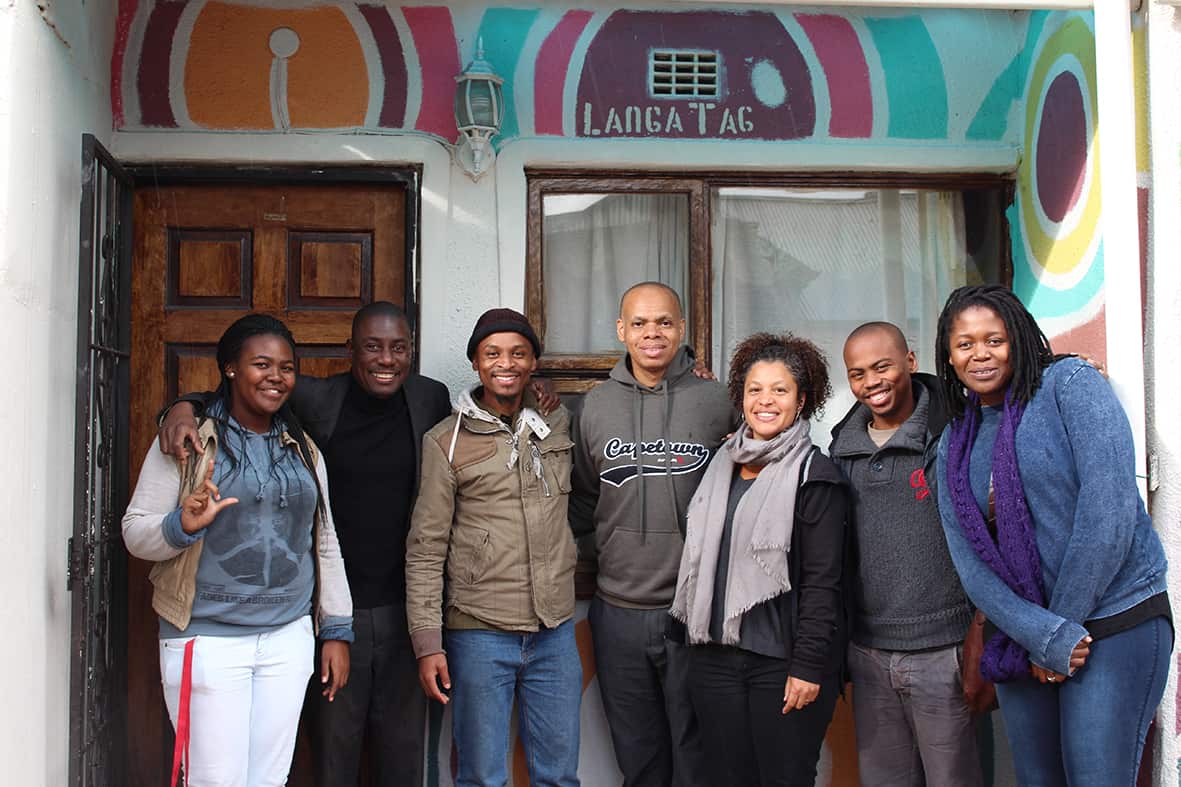 Xola Maswana, Tony Elvin, Siphiwe Ngwenya, Ambassador Patrick Gaspard, Raina Washington, Theo Ndindwa and Mary Sibande outside on of the houses on the Langa TAG stretch.
Did your wife, Raina Washington, play an important part in helping you chose which artists would be part of the collection?
Definitely, we’re absolute partners in this. As my wife and I got a clear sense of who we wanted in this exhibition, we reached out to Thelma [Golden] from The Studio Museum, Harlem who was very helpful and purposeful.
And will this sort of initiative become an on-going programme?
I can’t help but have the arts infused in everything that we do, whether it’s the visual arts or performing arts, music etc. In order to mark to the 20th anniversary of democracy here, through our public affairs program at the Embassy, we worked with the market there [Pretoria], to put together an amazing show, which did a great job of memorialising the democratic moment, better than any set of remarks that anyone could have delivered. The arts will always be a part of how we communicate, as far as this exhibition is concerned. Pieces that are up now will be here for our tenure in South Africa – we’ve got a number of empty spaces for South Africa artists.
How do you go about finding and selecting the South African artists that will be part of your collection?
We’ve been doing it through word-of-mouth, personal and professional relationships, talking to South African artists and getting their sense of what they think is really making a mark at this moment. We also have friends at places like Gallery MOMO, Stevenson, and Goodman, that we’re in conversation with – but I really like to do this in conversation with artists, visiting studios, and that’s what works for me. Blessing [Ngobeni] is a great example, I only knew about Blessing works because of Sam Nhlengethwa, he introduced me and I went to go check out Blessing’s work. I was completely blown away by his work; we’re going to trying to acquire something by him. He’s in this new phase now where he seems to be introducing aspects of graffiti art, which is intriguing to us.
Many view the established art scene in South Africa as being very privileged, yet initiatives such as this are intentionally aiming for a more inclusive approach. How important is it to develop the arts in a way that challenges the privileged establishment?
It’s terribly important, it’s a struggle that we certainly have gone through and continue to go through in the United States, particularly with African-American artists. I couldn’t help but note the interesting tension that’s arisen as a result of the situation at your National Art Museum, with the replacement of The Director and all these questions around what appropriately represents the face of the current South Africa and South Africa’s history. It’s a wonderful opportunity to join in the conversation, and to figure out what the access points ought to be. There’s a new vibrant burgeoning black middle-class in SA, but there is not yet, as far as I can tell, a consumer market for the wonderful art being created by some of the young innovators here, however that’s starting to change slowly and that’s really exciting. I think today is exciting, I think it’s wonderful that these established American and South African artists are here in Langa township, working with little children who have that illuminating spark in their eye and are learning and puffing out their chest a little bit because they’re realising that they’ve got a skill set, realising that their place matters and their place is precious, and what they are creating here ought to be treasured. I’m excited by that, and I think that it’s a real point of a reflection for the creative community in South Africa, I’m pleased to that we can play a modest role in these connections. 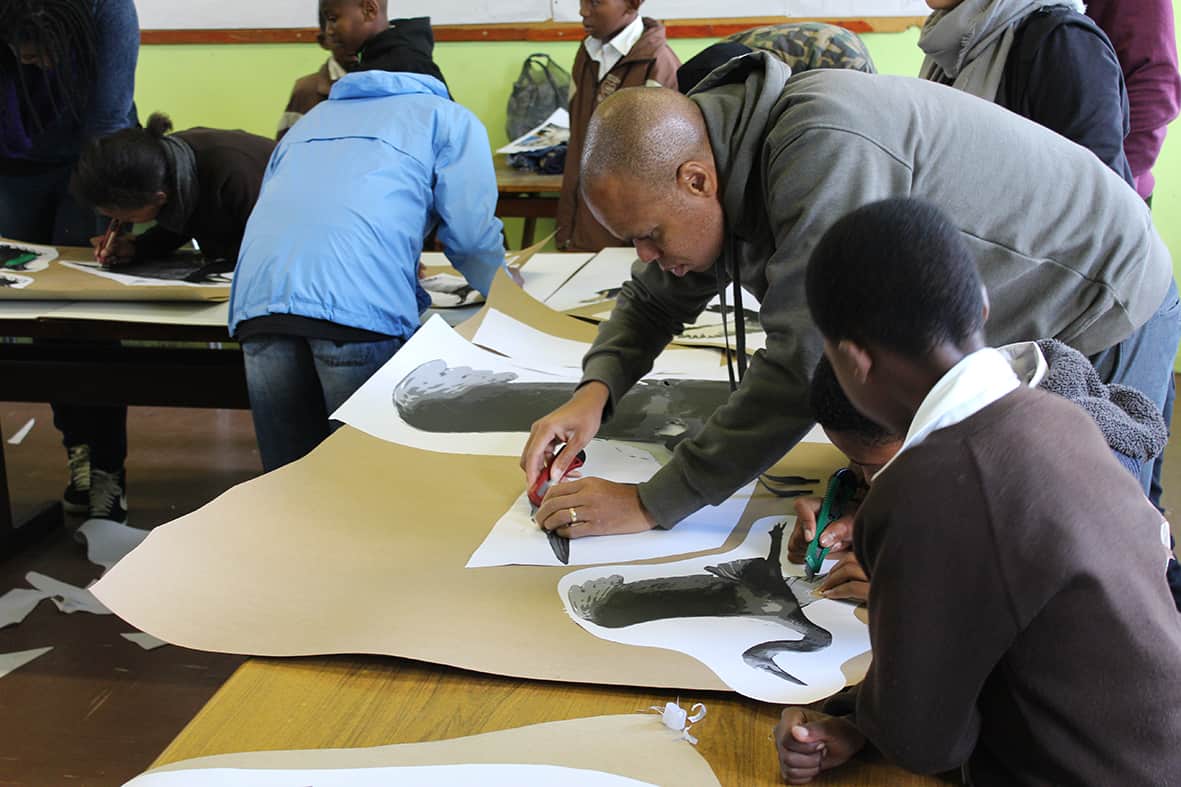 US Ambassador Patrick Gaspard working with local school children on the stencils for the Langa TAG mural.