‘In Context: Africans in America:’ In Conversation with Alfredo Jaar

In the lead up to the exhibition ‘Africans in America’ at the Goodman Gallery, Johannesburg, ART AFRICA caught up with participating Chilean artist Alfredo Jaar. In this interview, Jaar talks about his architectural background, his introduction to Media, and the tragic consequences of global indifference. 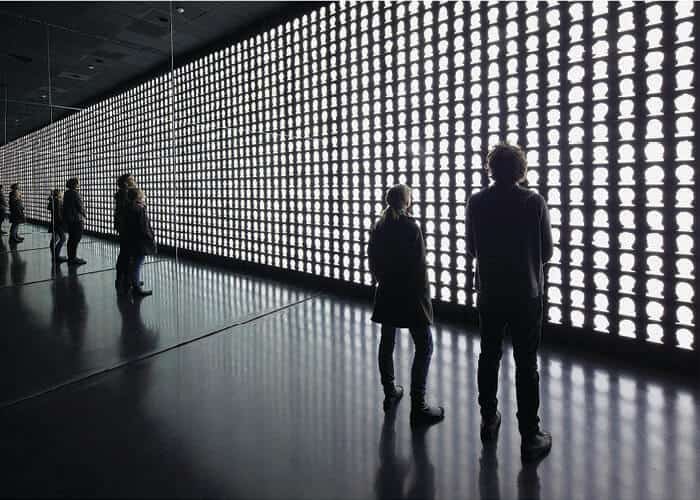 ART AFRICA: When did you first become conscious of the image and its role in understanding or communicating the world around us?

Alfredo Jaar: My father was a great reader of news and for him, to read the paper was a very important ritual. He couldn’t leave the house without reading the paper. I remember I was very very young, seeing my father reading the paper every day, and that created a model for my brothers, my sisters and I. It was a very important aspect of our lives. I learned how to look at images and text through reading the newspapers with my father, and from then on I just kept going and I discovered the importance of images – how they communicate, how they inform us, how they teach us, how they convey meaning… I also discovered later that images are not innocent and that’s when I started working on what I call the politics of images.

Was that when you moved to the States, in 1982, when you saw the images of the Chilean military coup and realised that there was a lot of backstory going on that you weren’t aware of living in Chile, due to the censorship?

Yes, that was an important moment. I had started earlier in Chile but in a very modest way, with very modest means, so the interest was there but it was in ’82 and after that I developed a body of work that really responded to this kind of idea.

You’ve repeated the importance of research on numerous occasions – that you cannot act in the world without understanding it first. Why is this process so important to you, and at what point in your research do you begin to feel like you understand? 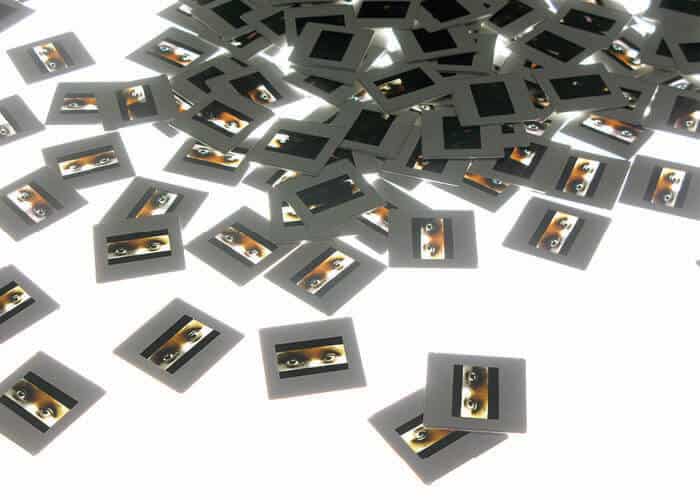 With architecture you understand the science of it – the principles that you’re working with – but when you’re working with images, things are harder to define or have less consistent attributes to them. How do you then begin to feel like you understand the context? Is it an emotional thing, where you feel that you can’t take any more information in, or is it an ongoing thing?

It is an ongoing thing. I also studied semiotics in the late 70s and early 80s, so I learnt quite early how to read images. It is something that most people do not do because we are never taught at school how to read images, we are taught how to read words and texts. It is a mistake because images communicate to us conceptions of the world. Every image contains a conception of the world, and every image has been crafted by professionals; marketing experts trying to sell us things, products, or ideas about the world. It is very important that we are able to translate these images and understand what they are trying to do to us. It began with my interest in newspapers, and then moving into semiotics and discovering the way in which newspapers report in a very ideological way, depending on the point of view or ideological agenda of their owners. All these things combined made me become deeply interested in what I call the politics of images.

One of the projects that you did spend a lot of time researching was the project that you did in Rwanda. You spent six years developing that project, dealing with the Rwandan genocide and the indifference of the global community. To what extent do you feel Western media should be held accountable for the all too often excessive and reductionary representations of Africa, and where does Africa’s own agency in this process come into play?

I think the world community and the media is totally responsible for this lack of involvement, of solidarity. The lack of context and interest for these black lives was so shocking, and of course the media is responsible. ‘The Rwanda Project’ started as a media project. I was accumulating magazines like Newsweek and Time, noticing the way western media reported the massacre that was happening in front of our own eyes.

It was my impotence and rage that made me go over there, and start a different kind of project beyond working with only media images, but it started as a media project. One of the best known projects from ‘The Rwanda Project’ is titled Untitled (Newsweek), where I analyse the covers of Newsweek magazine for seventeen weeks; from the start of the genocide on 6th April 1994, until the moment where they finally decide to feature the genocide on the cover on August 1st, 1994. That was seventeen weeks after it started! By then a million people had been killed and four million people displaced outside and within Rwanda. 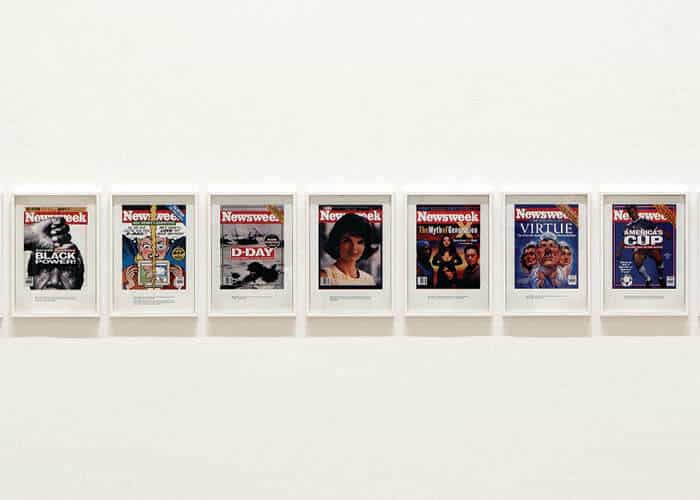 I know that each of the projects that you do undergo a series of transitions; from extensive research, to the production of a work, followed by the educational aspect – where ideas are shared with others, often at a distance from the original source. In much of your work, these degrees of separation, to an extent, become the focal point. Would you say your work is as much about the audience as it is the subject?

In a way, yes, because I am trying to communicate with a specific audience. I am not trying to create a work of universal value that everyone would understand, because the audience is part of the context I am analysing, researching and responding to. I am trying to speak the visual language of that audience so that I can communicate properly with them. The work becomes a work, finally, when it is activated by the communication in between the work and the audience. The work is successful only if there is communication.

If you look at the technical definition of communication it is not about sending out a message, it is about getting an answer. If you do not get an answer there is no communication, I never forget about this when I create a work of art. I am looking for that communication to happen. The work exists because of what I am trying to say but also because the audience must respond.

In a lot of the projects that you’ve done around the world, from the Mexico/US border to your projects in Montreal or Chile, there is a deeply cathartic experience for all the people involved which I guess stems from that. When you think about all of these projects, what stands out the most from the experience itself?

Hopefully two things; what do they mean for me, and what do they mean for the audience. For me it is really about a pretext to understand the world – to me the world doesn’t make any sense – so every single project is a way for me to try to understand the world, and everything I know about the world I learnt making work about certain subjects – realities that I do not have the language or vocabulary to understand. For the audience I hope that the work communicates to them, illuminates them, moves them, touches them and informs them. So basically the work has an ambition to inform, but at the same time to move, to illuminate. The work is successful when it does all of these things at the same time. Obviously it is very difficult to reach that level of accomplishment, so in a sense most works fail, but I keep trying. 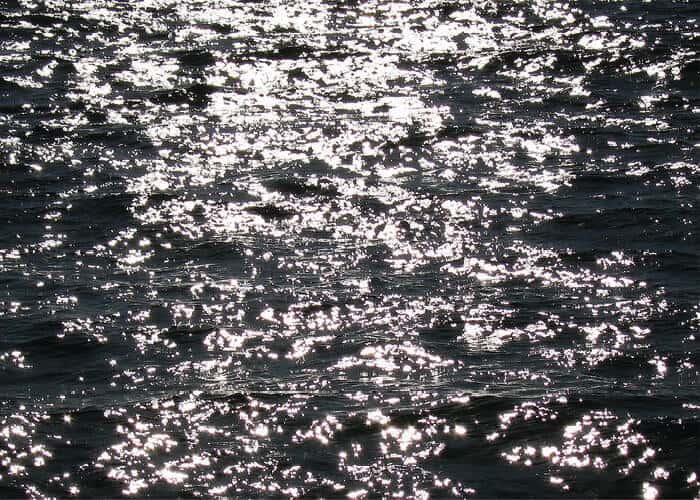 Biko once said that Africa’s greatest gift to the world would be to give it a more human face. Something that struck me about your work when I was doing research, was that there is this underlying humanity; a focus on people, our relationship to each other… Would you say this sentiment is true to your own motives?

I really like that statement by Biko, I didn’t know it. It is really beautiful. But it would be too ambitious for me to hope that my work reaches that level of accomplishment. I am also not an African and I do not speak for Africans. The work that I do about Africa is really about what I feel, it is a way to express my rage and my solidarity with the African continent, and my support.

You have quoted Jean-Luc Godard in saying: “It might be true that you have to choose between ethics or aesthetics, but it is also true that whichever one you choose, you will always find the other at the end of the road.” Could you elaborate on this in relation to your practice?

In every lecture and interview they ask me about the relationship between art and politics as if they were separate, and I have never been able to separate them. For me it is impossible to produce anything that does not contain a political conception of the world. For me all art is political, and so when I found this quote by Godard I started using it to explain that everything we do has political meaning. To elaborate on what Godard was saying, let us assume that art is one thing and politics is something else, even though it is not true, but let us accept that for this argument: I can assure you that if you do something that is purely political, in the end you are making an aesthetic statement, and if you are making something purely aesthetic, you are still making a political comment. Godard uses a different language to express the same idea.

How does that idea come through in the work that is going to be on show at the Goodman Gallery during the ‘In Context’ programme?

The work is called One Million Points of Light. It is a work that I realised in Luanda, Angola. I took a photograph standing on a beach in Luanda, looking across the Atlantic towards Brazil. Of course Brazil is very far and you do not see it, but my camera was pointing towards Brazil. I shot at the water and at the lights from the sun being reflected on the water, there are millions of points of lights being reflected off the water. It is a very beautiful image – very simple, almost banal. That image is projected on the wall and there is a set of postcards that come with that work that people can take home. On one side is the same image that is being projected on the wall, and on the other side of the postcard there is a text that explains that Angola exported millions of human beings as slaves to Brazil. Today, 35% of the Brazilian population is of black origin, because of these shipments of slaves from Angola to Brazil, and so this work is an homage to all these millions of souls that were sent from Angola to Brazil as slaves. The work is titled One Million Points of Light. I want people to take those postcards home with them, and to think about what it means.

‘In Context: Africans in America’ is on show at the Goodman Gallery, Johannesburg from the 17th November – 17th December 2017.