In This Life and the Next: ART AFRICA In Conversation with Paa Joe

in News Articles 2013
Share on facebook
Share on twitter
Share on email
Share on whatsapp
In the lead up to his performance piece, titled The Farewell, at the 2015 FNB Joburg ArtFair, ART AFRICA spoke to Paa Joe, the celebrated Ghanaian palanquin and fantasy coffin artist.
This interview appears in full in the inaugural issue of ART AFRICA, ‘Becoming African.’ You will also be able to read this exclusive content in the October Digital Issue (FREE app download here for Apple and here for Android). 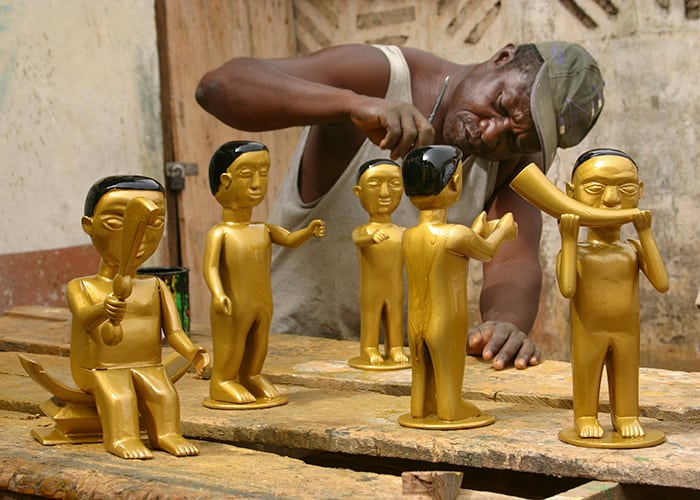 ABOVE: Paa Joe painting a group of funeral statuettes carved by him- representing a king with his dignitaries, 2004. Photo by Regula Tschumi.

ART AFRICA: Can you tell us a little bit more about the creative process behind your sculptures? Do you make the works with the client in mind and do you have any influence over the commissioned design?

These coffins are very symbolic in Ghana. People are usually buried in fantasy coffins that correlate to their professions whilst they were alive. Those with royal status, for example, are buried in coffins that represent a sword, lion, eagle or stool, while a pilot is buried in a coffin that represents an aeroplane. The families usually choose the coffin for their deceased, but when they find it difficult to choose they approach me and I assist them in selecting a design. I do this based on the occupation and the religious background of the deceased.

You’ve exhibited work internationally and hold a place in prominent permanent collections from New York to London, Japan and Australia. Your work has a universal subject matter; dealing with death, the ambitions of individuals and the concept of leaving a legacy. Is the way your work is perceived internationally different from back home in Ghana?

Before collectors became aware of my work the Ghanaians that I produced the coffins for had great admiration for them and wanted their beloved to be buried in them. My fantasy coffins were never considered as artwork in Ghana because of the function they perform in society, but they have since been considered artwork in Western museums and galleries. 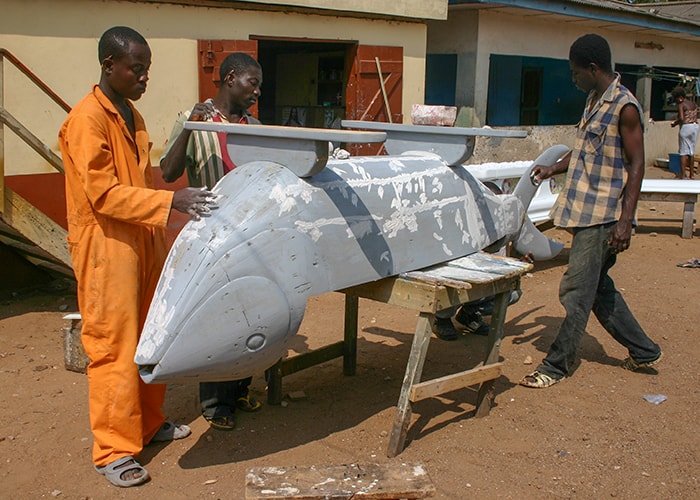 Apprentices working on a fish-shaped coffin outside of Paa Joe’s former workshop in Nungua, 2005. Photo by Regula Tschumi.

You recently participated in a two-month residency in Plettenberg Bay (South Africa) as the guest of ART AFRICA magazine. You completed two new works for exhibition at the 2015 FNB JoburgArtFair; can you tell us about your experience of making the work?

During the artists’ residency in South Africa, I had to adapt to new materials and techniques. One of the main differences was in the tools I worked with; at home I use hand tools to make the coffins while I used more machinery than normal to build the coffins in South Africa. While I was there, I made two coffins; one in the shape of an eagle and another in the shape of James Dean’s Porsche.

You will also be presenting a performance art piece at this year’s FNB Joburg Art Fair. Please give us some insight into the cultural significance of this piece? What kind of reaction do you hope it will elicit from the audience?

The performance will take place in two parts – first I will ride in the eagle-shaped coffin, which will function as a palanquin. With the help of pallbearers, I will be carried as a symbol of authority in the specialist craft of coffin making. In the second phase, the same eagle will be carried as a burial rite to the land of the afterlife. This will demonstrate to the audience that “there is a season and a time for everything” – a time to be born and a time to die, a time to laugh and a time to mourn. 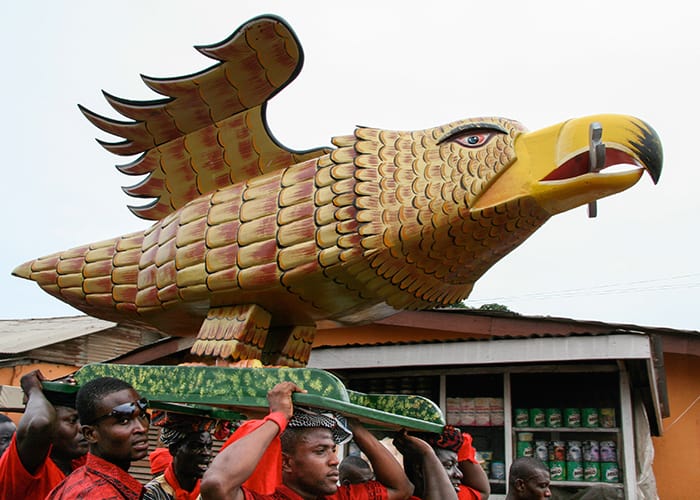 A funeral procession with a golden eagle coffin made by Paa Joe in the coastal town La 2006. Photo Regula Tschumi