Hunter-Gatherer: On Survivalist Aesthetics in the work of Kai Lossgott

Cameroonian art critic & curator, Nadine Bilong, explores the curious gaze of the hunter-gatherer, survivalist aesthetics, as well as the paradox of waste as presented by performance artist, Kai Lossgott, in his work Hunter-gatherer. 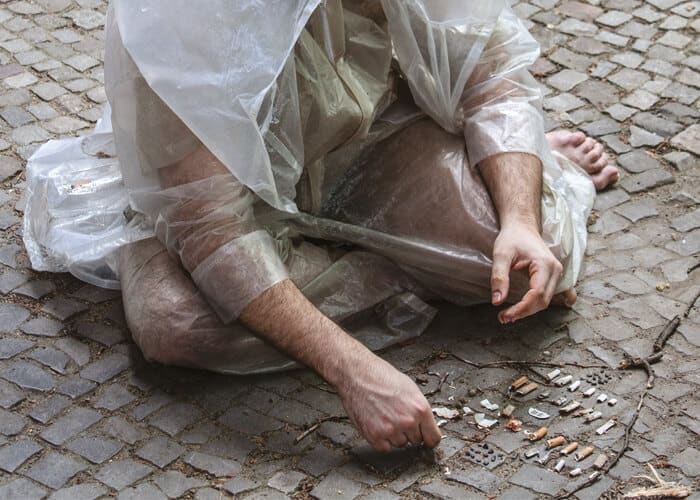 The focus on the ‘waste’ object is a way to identify and integrate the invisible in our orders of being. Even in denial and avoidance, we are permanently in relationship with these unseen invisibles that comprise of our entity. By rendering these visible, Kai Lossgott challenges us on the opacity of transparency.
Hunter-gatherer, a speculative multidimensional performative act, sparks several epilogues on the origins of the ‘human’ and the ‘natural,’ categories we can no longer take for granted in the anthropocene. Part of ‘project carbon: the destiny of things,’ it continues the artist’s preoccupation with the duration of individual ‘bodies’ within systemic forces.
Considering our times’ demands of a cure for the various ills of humanity; the artist casts an anchor in the real world, seeking dialogue not with nature, but amongst humans. Listening, patience, observation, understanding, sharing, adaptation, and the ceremonial gift – several factors of ritual favour a deeper engagement in conversation, and the potential for experiencing instances that can short-circuit our vision and foster true meetings.
Nestled within these ancient practices, monologue, like the Artist’s text reboot – sometimes spoken during the action – is also a therapy for social vices. After all, how does one open up to another without having made a dip into the self ? Muntu alone facing the world: self-narration as mental hygiene. The term ‘muntu’ is a commonly used Pan-African word meaning ‘human person.’ It offers us an Afropolitan hybrid update on the languages of Moliére or Shakespeare, which narrate to us a false universalising claim to a human purity and equality, one which the artist humbly denies in biographical texts, referring to himself as a human-in-training. African philosophy does not refer only to those who are Afrodescendent, indeed, the plural form, ‘bantu’ informs the meaning of ‘ubuntu’ (human solidarity).
Hunter-gatherer is a demonstration, an intense poetry of the hominid in his inner circle and his relationship with matter. Dressed by his transparent cape with multiple pockets – mythical – the Artist becomes a tapestry weaver expressing strands of body, mind, and soul. He mediates the shudders of muntu, revolving around the animal origin of his status as hunter-gatherer. Overproduction, overconsumption, over-accumulation, overload, over-pollution – all these words and wrongs which are the consequences of the gravity of waste objects, forming the DNA of our co-habitation.
HUNTER-GATHERER
The performance hunter-gatherer, from its title to its form, sounds like an alarm on the ‘nature’ of muntu; his gaze confronted with the state of curiosity, which draws him to hunt, conquer, possess, control and appropriate things which appear to him healthy and therefore useful among the unseen. Hunting – which is the original, primal means to acquire ownership – is the action to research these, pursue them, and seize power by an operating force, trickery, skill, or technology. Departing from the exterior to collect and digest new things in its interior. In the same way as hunter-gatherer would begin on the street to be extinguished in the gallery or museum like a lurch into intimacy. This gesture shows man’s insatiability but also his permeability by the natures he wants to tame at all costs. From the epidermis protecting the territory dedicated to the hunt, to the heart of his subcutaneous tissue, in his dance the sculptor-plastic-surgeon departs in the quest of matter with the aim to fulfill and preserve the existential void of body, soul, and spirit.
The action hunter-gatherer is symbolically comparable to the game of a treasure hunt. What are these miracles hunted-down by the artist? Who will be the gatherer and owner of these inconvenient wonders? Cigarette butts, used metro tickets, pieces of dried bubble- gum, unsanitary objects or works of art that will be placed one by one in the exacted space of the white cube. These then become treasures accumulated for conservation and protection, depending on the degree of interest. Objects situated outside of fields of interest become sublimated waste. Unlike homo sapiens (the knowing man), like an ancestor from the future, hunter-gatherer conserves things called “waste,” in a vision at once utilitarian and purely musical.
WASTE-OBJECT DNA-CARRIER
Kai Lossgott embodies a scientific vision of those objects he qualifies as “DNA- carriers.” These precious substances collected in the street, arranged in the pockets of his transparent cape, then exhibited in an area delimited in museums, once belonged to other persons. They also have left their traces. These objects henceforth carry ours, and will carry those of others in the future. Their existences are the proof of our own.
Here is the paradox. Most waste objects, particularly petrochemical products, are designed to last forever. Death is genetically programmed into our bodies. We will one day leave this earth. Similarly to the DNA in our bodies, our discarded possessions remain to register us in time and space. Over-pollution is the result of our inscription into time via these objects, to which we are attached for life and depend on for it.
The fact that humanity considers these as waste is contradictory, since it then denies a function very close to that of its own DNA. Kai Lossgott’s transparent cape with multiple pockets could symbolise this illusory distance put between hominids and their waste items hidden away in dumps, or flushed down the toilet. Only the hands and feet of the artist enter into contact with unsanitary objects, but his transparent cape protects him from any contact with ‘waste’. Thus, in wasting, the human contradiction inevitably appears: buy in order to consume, but stop consuming and discarding that which simultaneously carries our ontology, the very wish to survive into eternity, and thereby paradoxically also the destruction of the habitat that guarantees us life. How can one explain this discrepancy of rejecting one’s DNA, this ‘other’ that makes us who we are? 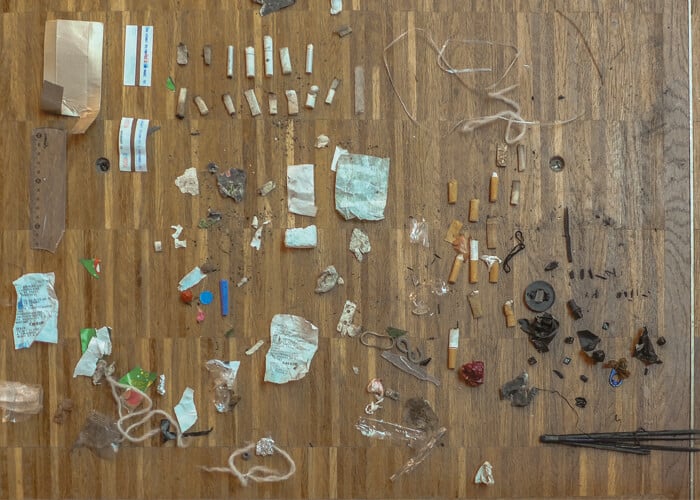 SURVIVALIST AESTHETICS OR SOCIETY OF UNHAPPY ENDINGS
This is another dimension addressed through hunter-gatherer, fuelled by the phenomenon of construction, destruction and reconstruction, which psychologically establishes us in the present moment. Kai Lossgott broaches the topic of a limited life-span, the apocalyptic, the question that haunts humanity since its inception, the question about its end. He gives evidence of the survivalist aesthetic that strongly reflects this contemporary period of the early twenty-first century.
Survivalism will manifest itself in the manner of conducting the fear of mortality, which means the paradox of rejecting the ‘waste’ object of our DNA and by consequence the rejection of self. It is about the survival instinct, the preparation of hominids for the disaster in the future, an interruption of social or civilizational continuity, or even survival of the dangers of nature. The survivalist mindset is expressed in the attitude performed towards ‘things.’ By accumulating objects, in stockpiling matter, the subject constitutes a fragment outside the body, a placebo that counteracts the fear of missing out on the future. Ironically, like the vanished bodies that gave birth to them, the context of these same objects will sooner or later be ‘forgotten’ by history too.
This survivalist aesthetic allows the artist to comment on the overconsumption of society in all its affected sectors, regardless of the social status of individuals. The homeless, humble or wealthy body will not have the same relationship with overconsumption. Nevertheless, they find themselves in compulsion, fear, anxiety. The focus on the “waste” object is a way to identify and integrate the invisible in our orders of being. Even in denial and avoidance, we are permanently in relationship with these unseen invisibles that comprise of our entity. By rendering these visible, Kai Lossgott challenges us on the opacity of transparency. For him this is an opportunity to consider a genuine future for humans, a return to the exact de-definition of hunter-gatherer hominids. Furthermore, it refocuses the subject in relation to his identity as a citizen of South Africa, born of white low-income parents that experienced upward social mobility to the middle class. Belonging to a generation of whites that have been assimilated in a country whose social challenges are dominated by black working class concerns, he dreams of a new model of society in response to one that inspires self-accusal and rejection. As a descendant of a historically privileged minority, he seeks a language to meaningfully participate in a shared future.

In this imaginary, he references the Afrofuturist movement as a model of an undoubtable and infinitely worthy company. Calling upon the hybrid and invoking it is a condition that distances the viewer of the unique object ‘work’ into grappling between its contextualisation and a deep fissure. This dazzling and perennial tightrope will forever traverse an ontology of unknown objects. The faces of the hermeneutic present the world for reading. The task leaves its stain and the trigger is touched, to excite other readings and expand these visions.

Nadine Bilong is a Cameroonian art critic and curator based in Paris. She was the performance curator for the Dak’art Biennale 2016, and is the founder of the performance and installation platform BREATH’ARTS PERFORMA. She has a Master degree in International Business Administration at EMLyon Business School in France with a major in Arts and Cultural Management at Bocconi University in Milan. She is currently completing a degree in Art History at the University of Charles de Gaulle Lille 3 (France).
For more information on the artist: http://kailossgott.net/

How Simphiwe Ndzube employs the surreal in ‘Waiting for Mulungu’