Infecting the City: In Conversation with Jay Pather 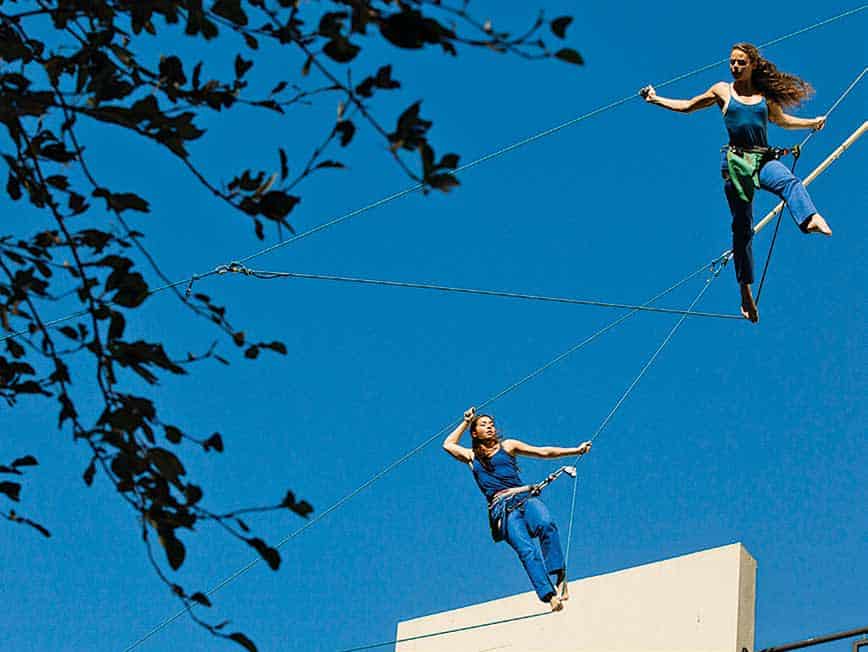 Compagnie Retouramont, Environnement Vertical, Infecting the City 2014. Courtesy of mango-omc
ASHRAF JAMAL: Hello Jay! Privileged to have this opportunity to chat about the recent incarnation of Infecting the City… what is your verdict?
JAY PATHER: I think it was the most successful one, flaws and all. It’s always a tricky balance between what one conceives and what is possible within this constantly shifting public arena. What was uniformly successful however, was the wide range and growth of audiences and the quality of work. Ultimately, I wanted to create a Festival that spoke to a wide range of publics. It’s a public art festival, after all, and the complexity is as much about the works – the installations and performances – as it is about how these meet the various audiences: the formal, destination-based and importantly, the informal, passing-by audiences. These conversations were preeminent in my mind, always. Having said that, I would have hated to create an alienating made-for-gallery-audience festival as much as a broad-stroked popular art festival. Mamela Nyamza’s 19-Born-76-Rebels was a case in point: fresh from the Festival d’Avignon, this abstract, conceptual work was an outstanding, popular success on Strand Street amidst bustling crowds and taxis. The remaking of what the audience demographic is for works such as this, is as central to a public art festival in this country as the work itself. It was in instances like these that one felt the potential of fresh conversations bleeding into a range of publics.
You’ve said before that “Cape Town has to find ways of speaking its truth, beyond it’s natural features like Camps Bay and Table Mountain- that the truth is all that goes inside of it and around it, and that is really very much about the people.” As a street-based, public oriented, free event, how has it shape shifted our interpretation of the city of Cape Town?
The range of work ensured a wide range of audiences and getting people to spaces they may not necessarily go to. Public art festivals also have a particular charm, with passers-by becoming performers in the work or audiences. The Shop Front and Centre Exhibition (curated by Farzanah Badsha), installed in empty shop fronts at the Golden Acre Centre, saw this merging of publics. Though I am not sure that one festival can shift the monolith that is Cape Town. I think the need to ‘clean up’ afterwards is always on our minds. Choreographer Mandisi Sindo once immersed a choir from Khayelitsha, painted in white clay and wearing black suits, in the fountain on St George’s Mall, in a work about the failure of the Truth and Reconciliation project. It was a searing, powerful work of great impact. In cleaning up the sediment afterwards, one realises that the work is actually quite momentary. It’s what happens to the city the day after Tweede Nuwe Jaar, and it’s absurd how quickly the city returns to its normal gentrified self. We all just have to try harder perhaps, to create a palimpsest that is hardy enough so that other meanings linger. This is, of course, going to take much more regular and considered inscription. 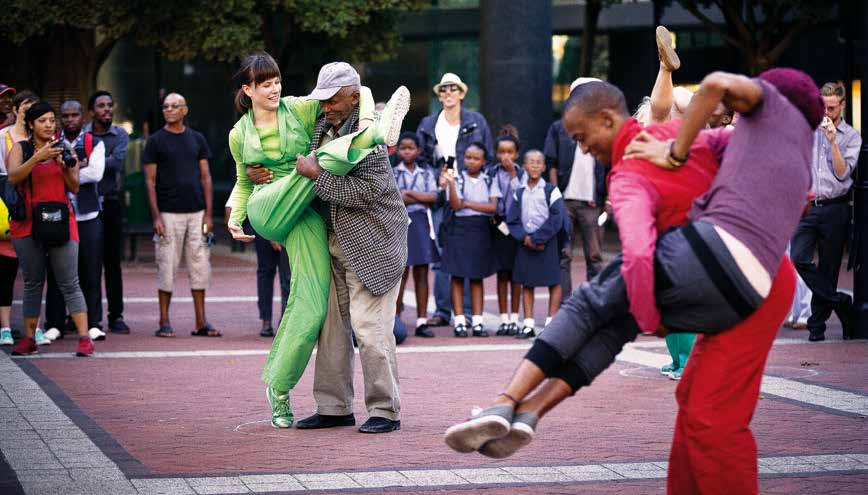 Da Motus!, Con Tattoo. Infecting the City 2014. Courtesy of mango-omc
Do you find a heightened appreciation of the interpenetration of art and life?
Yes, I think that there is this wonderful ebb and flow of reality and fiction – the most alluring, yet elusive, quality of public art. Alien Oosting’s Surveillance Stage involved the projection of a live closed circuit camera onto the Western Cape Provincial Legislature building, making apparent what surveillance cameras record. A ‘stage’ was created on the pavement and people were invited to dance, draw etc. and this was what was projected. It was illuminating how many people took this up and got into the fun of it all, possibly unaware of how much surveillance does go on in the city. At the Cape Town Station, the piercing cries of an actual brutal fight between a man and a woman flew around Asanda Kaka and Valentina Argiro’s startling installation of dresses on 360 wooden crosses, referencing the approximately 360 cases of abuse against women and children reported daily in our country. On another note, the simple act of stepping into a community hall on Commercial Road, an act most of us would not perform even though we pass it daily, gently revealed this art/life transgression.
Read the full interview in the July Edition of the free Art South Africa Digital Magazine, available on the Apple App Store and Google Play Store.
Full interview in print available in Art South Africa Volume 12: Issue 4, June 2014, on sale now.
For more info on applications for Infecting the City 2015, click here.