Heather Ferrigan from Stocktown spoke to Johannesburg-born, Stockholm-based photographer Kamohelo Khoaripe about his series Freedom of Hate Speech and his war on verbal abuse. This interview appeared in the January Digital Issue of ARTsouthAFRICA. 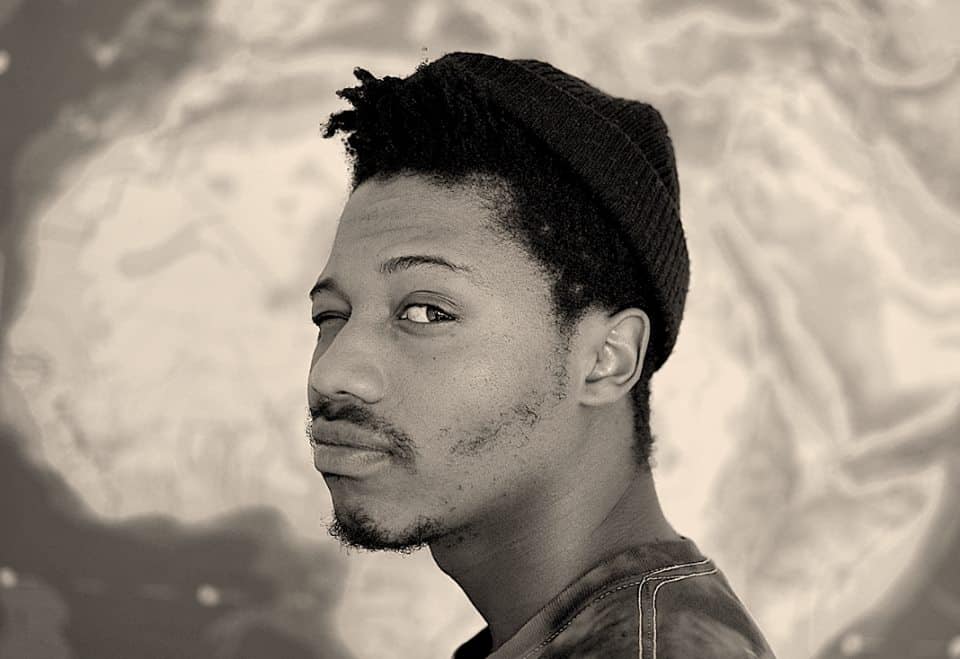 The danger of being considered outside of the norm is probably humanity’s greatest failure and, sadly, is present everywhere. The old news is that homophobia is hard to dodge and the level of violence versus tolerance varies in each country and language. The profanities are endless, and the many shades of derogatory terms can crumble dignity in a heartbeat, ain’t that right – chi-chi man/ batty boy/ faggot/ dyke/ muff diver/ carpet muncher?

The stigmatism and discrimination faced by many LGBT people throughout history has taught us that governments aren’t engaging fully enough in order to eliminate hate crimes or verbal assaults based on sexual orientation or gender identity. In 2011, the UN’s Human Rights Chief warned about the rise of homophobic hate crimes around the world—accordingly, figures show that homosexuality remains a criminal offence in more than seventy countries.

I’ll go on: cases of corrective rape, numerous reports of murder, and a poll conducted by YouGov in 2013 revealing that one in six LGBT people (630,000) have been the victim of a homophobic hate crime, verbal insults, harassment or physical assault—all this paints a picture of disappointment. It is a disaster that this global issue is even brought into mainstream consciousness and a total embarrassment for humankind.

We need to start talking about hate speech, the abuse and freedom of it. Acknowledging and tackling the increase of hate crime alone won’t silence the verbal version of it—public expression of views calls for consequences.

In April this year, Stocktown & Beat Prose Magazine launched a challenge urging artists to submit their work relating to the subject ‘Fighting through the challenges of our time.’ With such an abundance of submissions, we finally managed to crown our winner and it gives us great pleasure to introduce the Stockholm-based photographer Kamohelo Khoaripe and his photo-project ‘Freedom of Hate Speech.’ 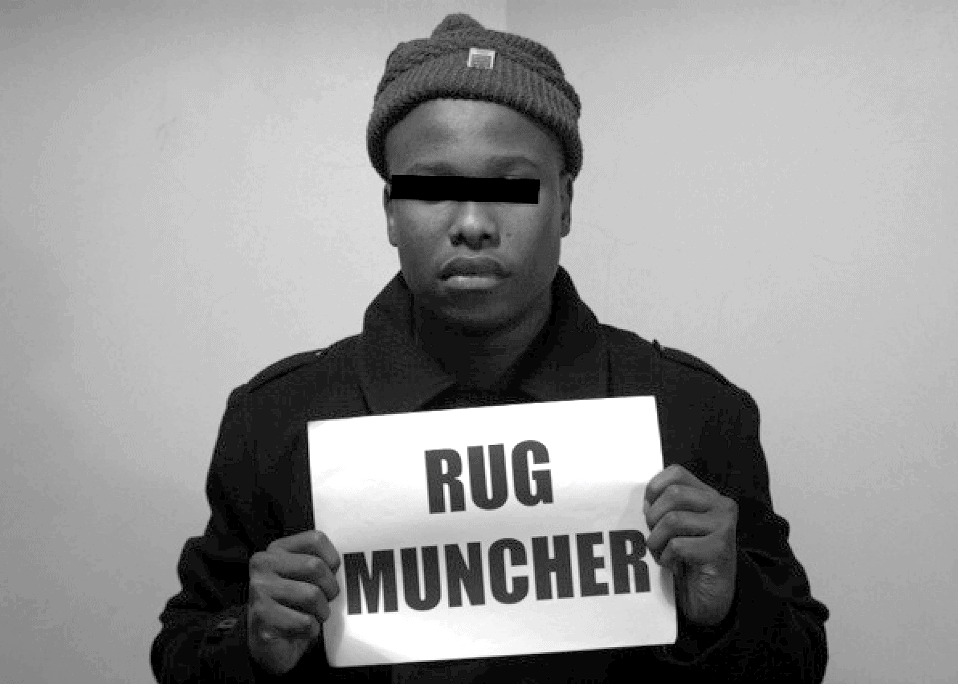 ABOVE: A shot from Khoaripe’s Freedom of Hate Speech. Photo courtesy of the artist.

At the age of twenty, Kamohelo met Paul Shiakallis, a professional photographer who he assisted on shoots, that’s when he started taking it seriously and pursued his passion. Today, he works from Stockholm to Johannesburg and his work encompasses a range of subject matter—from portraits to advertising work to editorial work. “I don’t want to put myself in a box, I’m open to anything. If I have to go out there and document pride I’ll do that, taking photos for events, lifestyle parties, posters, or a lookbook, I’ll do it.”

In 2013, Kamohelo decided to bite his tongue and listen and be receptive to people expressing hate and prejudice about homosexuality, taking his camera with him.

The ‘Freedom of Hate Speech’ is noticeable when somebody is listening. As it turns out, he might just be a genius, but doesn’t know about it yet. When I asked him what he considered to be the greatest challenge of our time, he responded:

“Homophobia is the biggest challenge we face right now. People kill in the name of religion because apparently‘Jesussaidthat’,whichtome,isveryignorant.Alotofpeoplearekilledbecauseoftheirsexuality and people aren’t getting convicted for it. Gay people are seen as animals in the eyes of ignorant people. ‘Freedom of Hate Speech’ shows what’s happening right now.”

‘Freedom of Hate Speech’ is an exceptional portrait series, and as the title suggests, it deals with a subject that is undoubtedly in need of addressing—portraying preconceptions of LGBT people. The photo series provides an opportunity to show solidarity in the fight to end preconceptions against LGBT people and bring the realities of hate speech to public attention. The video by Zanele Muholi, Visual Activist (2013) documents the award-winning photographer’s work and marks a campaign against gender violence which inspired Kamohelo’s work on ‘Freedom of Hate Speech.’

“We had an assignment in school where we did [an interpretation] of someones work… I got Zanele Muholi. I knew what kind of photographs she was doing; portraits, documenting LGBT people, raising awareness about corrective rape and different sexualities. Reading through her artist statement, I thought, ‘Oh wow. This is cool.’ I thought, ‘Ok, let me do this: document the people who are committing the hate speech— holding a placard, showing different [derogatory] terms.” 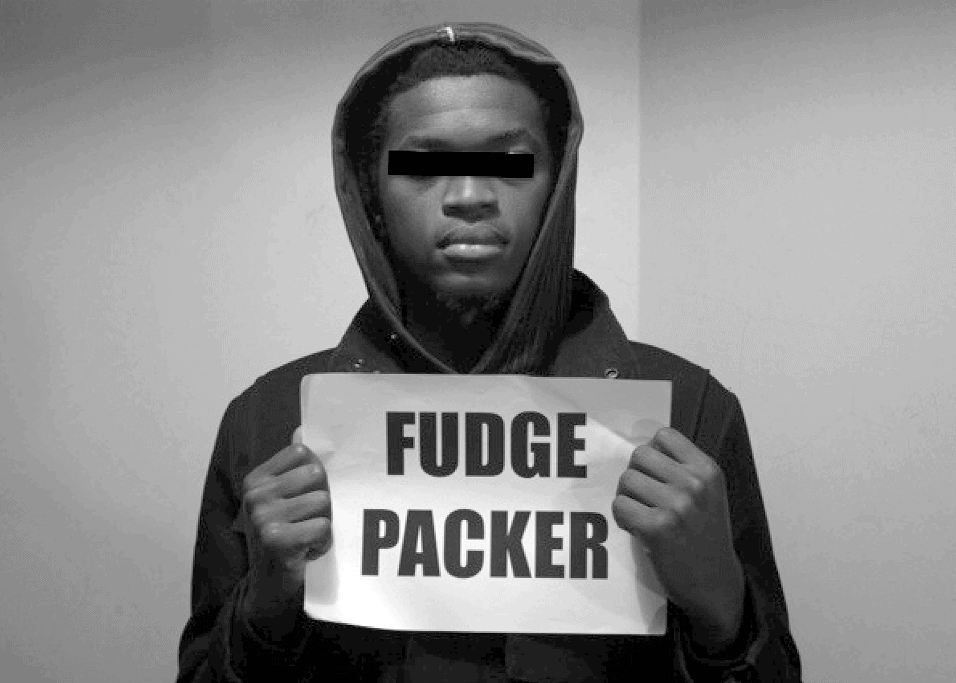 ABOVE: A shot from Khoaripe’s Freedom of Hate Speech. Photo courtesy of the artist.

Kamohelo’s work documents hate and captures the various attitudes expressed by everyday people. It’s an ongoing photo project that hopes to raise awareness about homophobia, as well as the role of people observing. I believe that this project is an artefact of our time, epitomising homophobia in its true generic form.

“I went around asking people, homophobic people, what terms they would use, what they would call a gay person, or words that have been said to them. A couple of people wrote down words and I printed them out for them to pose with.”

There is still more to be done and people such as Kamohelo Khoaripe are paving the way. They are committed to working with photography as a means to show the great impact we play in our role as observers of homophobic hate speech. It’s a study, or observation, asking: “What are we doing about it?”

H.F: Talk us through your vision of ‘Freedom of Hate Speech,’ what do these portraits tell us?

K.K: It’s about how society lets shit like this slide. Perpetuating the belief that “it’s my freedom to say such shit.” A lot of shit is happening and people are committing all these crimes in the name of religion, which is pretty fucked up, that’s what I hate about it. People are committting crimes because of religion, culture and all these other shit excuses. I do it for me, this is what I want to do, and I want to change this. Then it’s up to the next person if he’ll take it or not. I know there are a lot of people who won’t appreciate it, they’ll say “fuck that guy, he’s also gay,” or something like that. But I’m trying to change people’s perspective of gay people, not just about being gay but also the things gay people have to undergo.

Where and when was ‘Freedom of Hate Speech’ shot?

In June 2013, while I was staying at a friend’s place in Pretoria, we used to have these conversations about gay people and how, in general, people could slip something like “I like gay people..but…” or “gay people are like this…” And that kind of thinking caught my interest. I had an idea but not a theme, it came after I handed in the assignment. Ater getting my results, that’s when I wrote the title, I came first in class.

Where did you find your subjects for your portraits, and how did you react to their answers?

My subjects were random people and acquaintances, one guy was a security guard who worked around the complex we stayed at, the other guys stayed around the area and were walking past the apartment. I’d stop them and ask: “Which word would you use to refer to gay people?” My reaction was “How do you come up with such offensive terms?” Standing there, I felt stupid and I felt provoked, but at the same time I was laughing about it, asking “Are you serious?” or “Do you think you’re better than them?” I wasn’t angry, I wanted to ask questions. I’m interested in why people think like that. They’re entitled to their own opinion. I don’t want to change their thoughts. Its not their fault—I can’t blame them.

What is your role as a photographer in this project? What have you learnt about yourself while doing this, and where do you see yourself going from here?

I’ve learnt to be open to new things actually, to know about it, not bullshitting it or speaking shit about it. To get to meet and understand and sit with the people and ask questions, to get informed about their way of thinking. In the future, I’d like to do a photo exhibition a project called ‘Living in Living Rooms’ because I’ve been living in different living rooms, sleeping all over—at least twenty. I’d also like to document everything that’s happening in Stockholm and perhaps launch the same kind of photo series here, there’s a lot of good stuff going on here and people are just sleeping on it.

Heather Ferrigan is the editor of Stocktown and a freelance journalist. She advocates the importance of feminism and human rights and has a BA in Art History from the Stockholm University. Other main passions include photography, travel, and irony. Heather is based in Stockholm, Sweden.

The original version of this article was published on Stocktown’s website and is available here.