ARTsouthAFRICA in conversation with Bisi Silva on producing an ambitious monograph on the Nigerian photographer J. D. ‘Okhai Ojeikere (1930-2014) for the Centre for Contemporary Art (CCA) Lagos, and using Kickstarter to fund it. 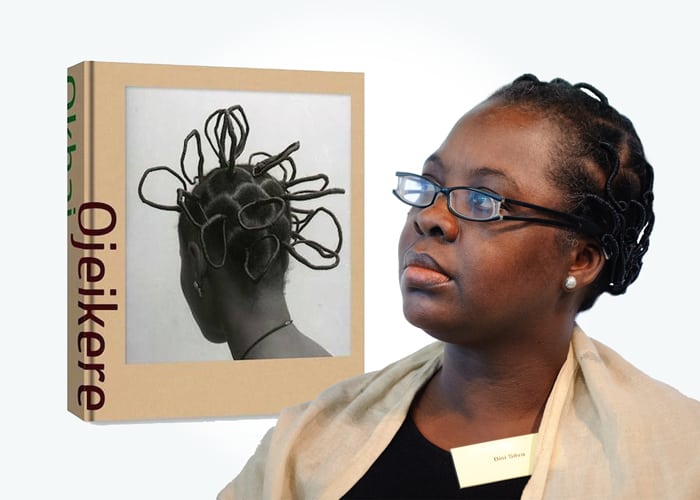 J.D. ‘Okhai Ojeikere captures moments of history that portray his country in good faith. How has Ojeikere’s work influenced the trajectory of photography in West Africa and that of Nigeria?

J. D. ‘Okhai Ojeikere definitely wanted to capture an important moment in the history of Nigeria the way he saw it and experienced it. The bodies of work that he is best known for are his ‘Hairstyle’ and ‘Headgear’ series.  However he also documented other aspects of Nigerian spaces and Nigerian life, including architecture; his portraits at the University of Ibadan, and his work as the chief photographer at the first television station in Africa WNTV(Western Nigerian Television), founded in 1959.

West Africans, and other Africans in general, appreciate his work because he documented traditional hairstyles in a way that goes beyond an anthropological necessity. His images captured the hairstyles in an artistic way unparalleled by his peers, whose principal work at the time was studio portraiture and to some extent street photography. Ojeikere was not commissioned to create the Hairstyles series. Rather, it was a project born from artistic license to capture beautifully a part of our cultural heritage that was disappearing due to the influx of new and foreign styles and influences.

He is revered in Nigeria, where his work has enormously influenced a younger generation of photographers to push the boundaries of the artistic limit of photography. Many have reinterpreted or presented the headgear in innovative new ways that pay homage to the work Ojeikere created over 40 years ago.

Why do you think it was important to create a memoir of Ojeikere’s work?

The development of a history of photography in Nigeria is still in the embryonic stages, with few if any critical monographs on individual photographers. The few that exist have been written from outside of the continent. The publication J. D. ‘Okhai Ojeikere is fortunate to have benefitted from the full engagement and collaboration of the photographer, giving it the contextualization and criticality that many projects on older African artists sometimes lack. However, one of the main reasons was to highlight the diversity, depth and longevity of his practice beyond the ‘Hairstyles’ series. The publication highlights the interrelation between his architecture, hairstyles and headgear photography. In tracing the years before ‘Hairstyles,’ we have a deeper understanding of his trajectory and the local context that engendered such work.

Many African people can relate to the narratives reflected in Ojeikere’s work. Does the work mirror the society from which it sprang, or is it more global in conception?

It is both. I believe that a successful practice can talk about the society from which it comes from, while also speaking to a wider audience.

Is there anything from your curatorial background that prepared you to curate a memoire such as this?

I worked with Ojeikere for five years from 2009 to 2014, and I spent a considerable amount of time in his company,  going through his archive and having long conversations about the work and that time. He was extremely generous with his time and proffered the necessary information and understanding of his work. From a curatorial perspective, in 2010 I started working on a small exhibition focusing on the “Sartorial Moments and the Nearness of Yesterday,” showing over 30 images that were being presented to the public for the first time. It also travelled to Museum of the African Diaspora in San Francisco in 2013.  It was followed by the most comprehensive exhibition of his work to date, ‘J. D. ‘Okhai Ojeikere: Moments of Beauty’ (in 2012) at the Museum of Contemporary Art in Helsinki.  The current publication builds on these previous curatorial engagements.

There were obviously financial difficulties in producing the book. Why did you decide to use Kickstarter to fund the project?

Yes, producing a book of this nature involves a heavy financial investment and working with major publishers was proving difficult. After shelving the project for nearly two years, a friend encouraged me to publish independently and I took on the challenge. Using kickstarter to fund part of the project helped make the project realizable, it offered the freedom of not being dictated to by the art market on what can or cannot be published about art from Africa. The experience we are faced with is that almost all art books published in the West about African Art have had no distribution across Africa and we definitely wanted to prioritise the local and continental readership base.

To achieve this, we had to be creative in our fundraising, and this included Kickstarter. The funding from Kickstarter only covered about a third of the costs- we did not want to make the Kickstarter goal too high, because it is an all-or-nothing funding system. We felt our initial goal was realistic and any amount above the set sum would be a bonus for our efforts. Although Kickstarter was challenging, it was enjoyable and most importantly we were able to reach audiences that we may not ordinarily have reached without it. We had supporters from unlikely places like Thailand and Saudia Arabia and it was really heartwarming to know that someone in Thailand has the publication through their support of our project.

You received such an overwhelming response to the project – what does this tell you about the audience for Ojeikere’s work? Did you expect such a reaction?

The response has been incredible, but we know his work is highly appreciated and that many people who knew, supported and encouraged the work of CCA, Lagos would understand our vision and our purpose to bring the work of African artists to the broader public and art communities.

What is your personal assessment of the West African art world?

There is a vibrancy and a dynamism that exists, which almost borders on a sense of urgency. It belies the infrastructural challenges that we experience daily and the lack of governmental support that seems to have a quixotic view of art and culture out of sync with 21st century realities.

How does the African contemporary art establishment position itself to emerge as a ‘global player’ whose voice can be heard and respected?

First of all, it needs to appreciate and value itself by developing local and regional infrastructure. It also needs to be more reflexive about its activities. The dependence on the North is suffocating and people fail to realize the truth of “if you build it, they will come.” We need to develop possibilities here before we can emerge as real ‘global’ players and I believe that, with the proliferation of new spaces, organisations and collectives across the region and the continent, projecting our own voices is an important beginning.

West Africa, for example, is extremely fortunate to have the two major international events taking place here- the Dakar Biennale of Contemporary Art in Senegal and the Bamako Encounters of Photography in Mali.  These two events have been indispensable platforms in the development of the careers of many artists from Africa, continent- wide, as well as being an international meeting and exchange place.

What is next for you and CCA Lagos?

I was recently appointed Artistic Director of the 10th Bamako Encounters:African Biennale of Photography. I am extremely excited about this possibility especially at this landmark juncture in the history of this event.

With regards to CCA, Lagos, we want to focus more on our core purpose, research and publication, and engage the printed page as a curatorial platform.