Andrew Lamprecht, the recently appointed Editor of ARTsouthAFRICA‘s new sister publication, ComicArtAfrica, sent out a series of questions to a number of comic art practitioners for comment. The full response of Nathan Trantraal (who, along with brother Andre, is responsible for the ground breaking Coloureds and Crossroads comics) follows below. Selected extracts from other respondents are included in pull-quotes throughout the supplement and will be published online and in ARTsouthAFRICA’s digital editions over the next few months. 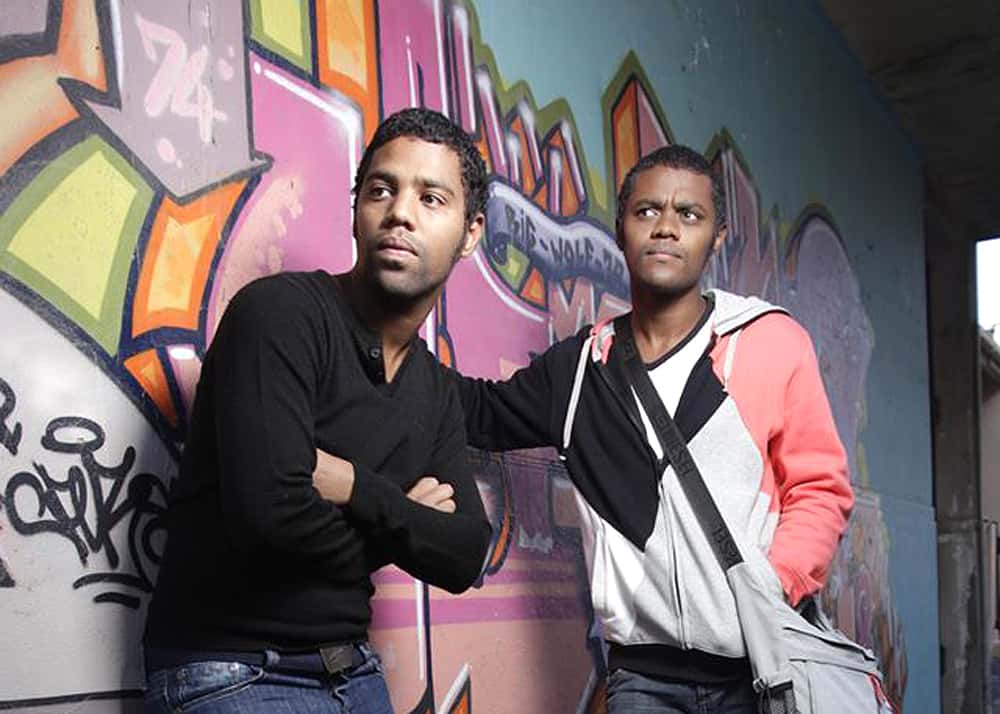 ABOVE: (From left to right) Nathan and André Trantraal. Image source: https://www.facebook.com/trantraal

What is the current position of comics and other related media in South Africa and the African continent? Have we arrived or are we still on the journey?

How do I put this? Well, if this was the Lord of the Rings, it would be the scene near the beginning where Frodo Baggins and Samwise Gamgee walk up the road and across that big field from their home, and, after about five minutes’ walking, Samwise stops and tells Frodo, in that cloying half-Irish accent, ‘If I take one step farther Mister Frodo it will be the furthest I have ever been from the Shire.’ So, I think the journey is going to be about another two volumes long, with lots of descriptions of barren landscapes and mountain peaks. But we’ll get there eventually; it’s an adventure.

Comics are a very accessible medium, as much as it is to read them as it is to make them. Comics are a bit like the ‘football’ of creative work; you need nothing to create stuff that you can’t find in five minutes tops. There is a lot of raw talent in this country and if someone invested in it we could have a whole new market, and we could have people creating jobs for themselves, for the love of it.

I think instead of following popular trends in American comics, African cartoonists should be working with African writers, and create stories that grow from this soil, not because of some national identity or pride or anything like that, but because it’s practical. You can’t get away with writing about stuff you don’t understand anymore. For example, you can’t have your character going to Chicago if you’ve never been to Chicago, like Herge sending Tintin to Congo. That won’t work anymore; there’s the Internet now, people will know and talk about the ignorant sh*t you’re trying to get away with. The essential thing is that real writers should be writing comics. The dudes who can draw but can’t write should be engaging with the dudes who can write but can’t draw, and vice versa. But that can only happen once people begin to realise that these shortcomings exist in the SA comics scene as it is now.

Is there a recognisable South African style in comic art? If so, how would you characterise this? If not why do you think this may be the case?

I would hope not. No, I don’t think so. I think at the moment there’s just a bunch of guys each doing their own thing, with everyone bringing his or her own set of influences to the scene.

In America and Europe, if something sold well, it was because a business like that was run like a sweets factory.  Say if John Byrne’s style sells consistently and he’s very popular, then for the next ten years everyone had to draw like John Byrne. That would become the ‘house style’ for the big publishers until someone else came along and did something new, and then for the next ten years everyone would have to draw like the new guy until that became old and stale.

I hope we never fall into that space. If you look at a company like Strika Inc – they do that football comic – they are very fond of calling what they do ‘the African style’, which is funny because their style is really just a bad imitation of the Scottish artist, Frank Quitely. I know most of the artists that used to work there were real fans of Quitely, but if you continue to say it’s ‘African’, people start swallowing it, and before long, you who’s doing the saying is swallowing it too; you convince yourself because it makes a good tag line for your business.

When I meet anyone who works for one of these big comic book/advertising companies I always ask the artist to show me the stuff he draws for himself. It very rarely bears a resemblance to the stuff they are doing to get paid.  For the longest time I couldn’t get a job as a cartoonist because I couldn’t do ‘African style.’

No one’s figured out how to sell the stuff. If you want to build a culture, you have to start at the smallest level; you need to be selling comics to kids. You need to build that market from the bottom up, but you need money to do that and no one is investing money in comics. That’s unfair to comic book creators, and, as a result, most comics coming out of South Africa are either badly written or badly drawn, or both, and that’s unfair on the general public.

Any other comments that you would like to make relating to our local comic productions?

I think the great thing about working in comics at the moment, in a country like South Africa, is that no one has yet defined what the industry should be like. We have an opportunity here to create what people expect from reading a local comic. People have a notion that comics should be about superheroes, but that’s more ingrained in American culture, it’s a relatively new thing in South Africa.

We’ve been lucky in the sense that the only people who make real money out of comics are making advertising pamphlets, and they are so transparent that people can see it’s rubbish. We’ve dodged a bullet in that sense, because if someone made a bad superhero book without all that advertising to highlight the fact that it’s rubbish, it might become a hit and make lots of money and people wouldn’t be able to see through it, which would be problematic.

People go where the money is, and if the money is in telling good stories about real characters with actual souls, then everyone will start thinking, “Maybe we should do that.” That’s why we should start in the way we mean to go on, because things will evolve from here into what it eventually becomes, and if here is good and we can build something out of that. I believe it can only become better, more sophisticated.

Finally, please describe what you are currently doing relating to comics, cartooning or sequential narrative. Please list your recent publications or current projects.

We are publishing two weekly strips in two papers, The Richenbaums in The Cape Times and <Ruthie> in Die Rapport. The Richenbaums is about a dysfunctional family who are very unaware of the fact that they are dysfunctional. Ruthie is based on a book our mother wrote. It’s a comic about a little coloured girl growing up during apartheid and how that kind of sucked.

We are also busy with a graphic novel about Crossroads, specifically the women’s struggle. We’re doing that with Koni Benson, a historian who specializes in the subject (The book is based on her PHD thesis), and Isotrope media is publishing it as we complete each new instalment, we have brought out two issues already, and we plan to bring out five issues.