Marcelo Brodsky is an artist, revolutionist, and human rights activist using his visual art to create awareness around the world. ART AFRICA caught up with him in the lead up to the Investec Cape Town Art Fair to find out more about his collaboration with Gideon Mendel to exhibited there.

ART AFRICA: Your recent collaboration with Gideon Mendel features images taken during the Apartheid struggle era in South Africa. How did this collaboration come about?

My collaboration with Gideon started in Brussels. We were both included in the exhibition “Resist”, curated by French/Cameroonian curator Christine Eyenne, at Bozar Palais des Beaux Arts. The show was about resistance in the sixties and seventies around the world and Gideon showed his work from the seventies and eighties around the struggle against Apartheid, and I showed my series 1968: The Fire of Ideas on an 18 metre long wall at the entrance of the exhibition, with handwriting on the walls and 42 images of the marches of 1968 from around the world.  We both liked one another’s work and became friends. That is the good thing about group shows, you get to know artists that you can work with in the future.

When ARTCO Gallery invited me to have a solo show with my work at the Cape Town Fair, we decided to extend my African works. I had already presented work in Dakar from my show at the Museu Berardo, Lisbon, from my 1968 series on the independence of Portuguese African colonies, and Zimbabwe, including Angola, Mozambique and Guinée Bissau. Later I incorporated Congo and Sudan and when I started to work on South Africa I contacted Gideon to licence his images for my project.

Gideon agreed to work with me, but his requests were interesting and challenging. He consented to the use of his images, but he wanted to be involved in the intervention process too so he could make suggestions, add information, etc. Gideon also wanted to have something in our work that differentiated it from the rest of the Africa series. I agreed to these terms, and we started our collaboration. The distinctive element would be a secondary smaller image on the right-hand side of the artwork that would interact with the main photograph.

In the process of working together, Gideon told me about the recent discussion in the South African art scene about appropriation, originated when American visual artist Hank Willis Thomas appropriated an iconic photograph taken by Graeme Williams without getting permission from him to do so. Our collaboration is also a response to this issue, illustrating that collaboration between artists and putting the story at the centre of the work – besides being the correct approach, rather than pure appropriation – can also create stronger and more relevant work. 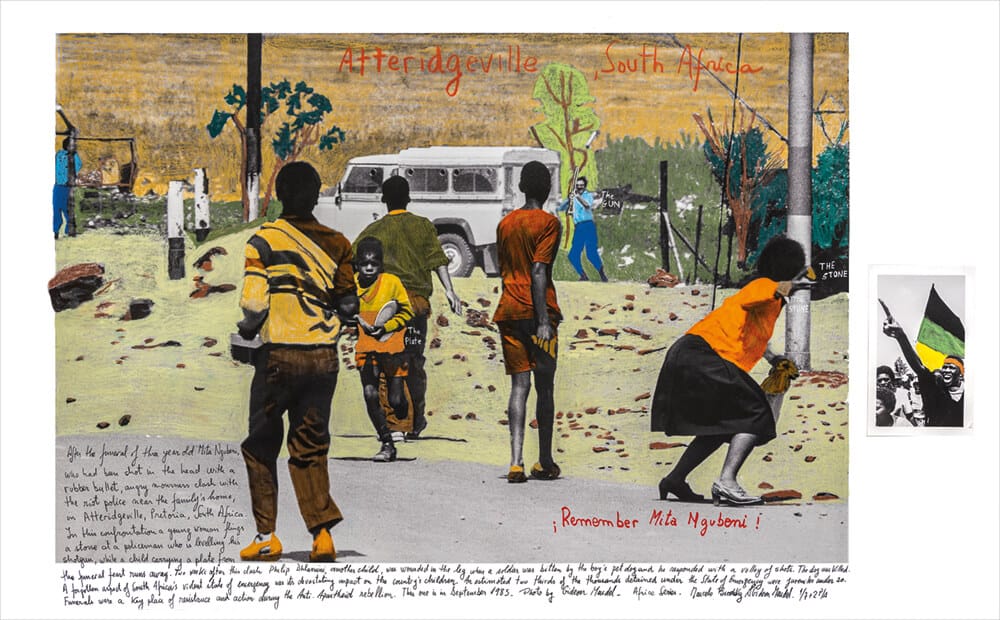 It has been said that you use visual art to create awareness of our world in a very critical and conscious way. And, the way you use text over photographs has been said to compress the time between then and now. Can you elaborate on your process of working with images and text?

I want to tell a story – and I want to do it visually – through a language that is able to combine images and text. I believe they both work together very well and empower each other to extend meaning. My pieces are generally part of conceptual essays around a subject. The most recent book “1968: The Fire of Ideas”  was about the 1968 movement around the world and I am working on a visual essay on African independence and social struggles as part of the series. Once my area of research is determined, I search deeply into image archives and photographers who have covered or dealt with that subject. I choose and consider the best images for the story and licence them formally with the copyright holders for use in my artistic projects. Then I research the issues that are captured in the selected image and make my interventions on the picture with colour, text and poetic captions. Each piece comes together and relates to the other pieces in the essay, by conforming to the complex, diverse, and multi-layered approach.

Seeing the images of popular movements that happened many years ago are often still valid today, this helps compress time. Young people today see themselves represented in the work by other people that were young 50 years ago.

Curator Inês Valle wrote of your work: “Marcelo Brodsky’s works are composed of powerful and aggressive images of strength that shake us up, challenging us to participate.” Is that the primary intention of your work?

Presenting historical images that focus on social issues that were meaningful in the past, show social movements in action, and present people in the streets fighting for their rights – can be inspiring to future generations in defending their rights.

The social movements of the sixties, African independence, and the fight against Apartheid in South Africa had important consequences in society. But these movements did not necessarily complete what they set out to do. Africa may not yet be totally independent, racism is still strong despite the end of Apartheid. My work is intended to make people think about this.

At the same time, we are seeing the growth of neo-fascist groups taking power in Europe and in Brazil, and we see a provocative clown installed in power in the US. If my work effectively challenges viewers to participate in defending their rights, as Ines says, then my work is achieving what I intended it too. 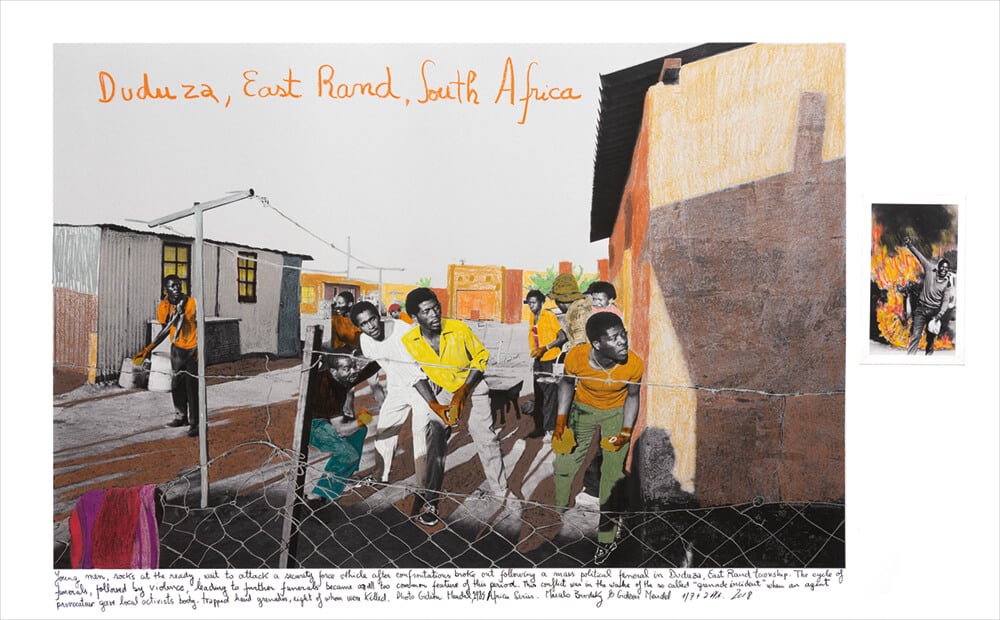 You have a long history working with images having owned and directed a photo agency. How do you choose the images you use and can you share some of your insights around the power of photographs?

In 1986, and looking for a way to earn a living, I started a picture agency in Argentina. That was a time when we used a big telex machine to communicate with people abroad, and not only the Internet but even faxes did not exist. Agencies were large warehouses of analogue images. Business was good in the nineties and the stock photography industry grew tenfold. We expanded our professional visual service to all the major Spanish speaking countries and Brazil. We created the Latin Stock Network, which represented many photographers from Magnum and Corbis in Latin America and Spain. That lasted for 30 years, until 2016. As a picture agency professional, I knew the importance of image rights, and how authorship of photographs should be recognised and paid for.

The expertise, connections and legal experience I gained from the picture agency times have helped me find the right images for my artistic projects. Whilst I had always maintained my artistic practice, after 2016 it became my full-time focus, and that made a big difference in building awareness for my work. Creating artwork and building awareness of it is effectively a lot of work. With my Buena Memoria historical piece in collections such as Tate and the Met Museum in NY, I was then totally free to develop my visual language further.I believe that the new generations don’t pay attention to messages that don’t contain images. Visual language is central to all narration if you want younger generations to engage with your work. If there are no images in a story, it is simply not read. Images capture the attention of the viewer, they are essential in contemporary language. If history is to be told to younger generations, images must play a central role in the narration.

I am focused on developing a visual language that is based on images, text, colour and narration – and in their complex interconnections – in a way that helps me deliver my messages. 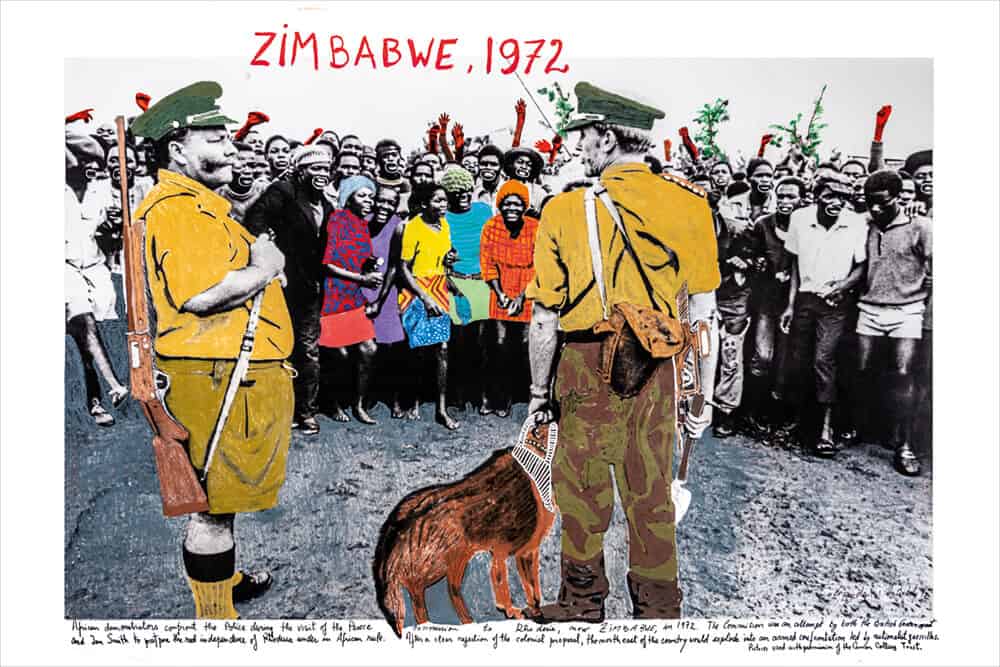 Your work challenges hegemonic structures on six continents with images of riots, marches, and protests being dominant themes. What has some of your collective experiences been working across such diverse geographies and cultures?

I believe that when people are out in the streets protesting or defending their rights there is something fundamentally wrong in that society. This was the case during the social and student movements of 1968 around the world, in the fight for independence and against racism in Africa, in the resistance against the dictatorships in Latin America, and in the feminist movement today.

The social movement of 1968 was totally international. In fact, it anticipated and somehow foresaw the issues around globalization we are experiencing today. Was it good? Did it achieve its goals? Partially. Some of the objectives were achieved, sexual freedom has grown, young people are involved in social and political change, the streets are still being occupied… But that is certainly not enough. To show historical images of people fighting in the streets for their rights can be provocative, and I hope they make the viewer challenge issues of today, and how to deal with them. Images are emotional, they reach the gut. On a one-on-one level art can do so much. When it comes to dialogue on a wider cultural level and possible futures – art can be a strong communicator for ideas to be heard and understood. 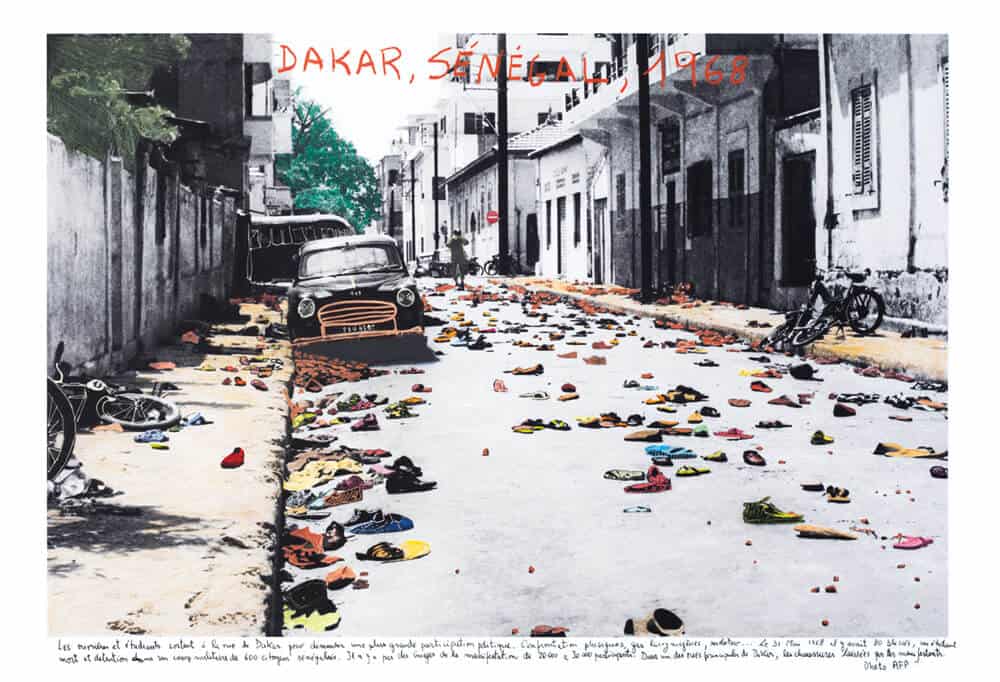 Can you tell us about the relationship between the images you use and the text that accompanies them?

After I edit and select the images for my work I need to arrange the rights to the images. I contact the agency, photographer or copyright holder and negotiate the rights for the art project. The authors of the photographs are always acknowledged in my work. Once I am authorized to use the image, I research the history and context around it. Part of my text is usually an extended caption, which may be more journalistic, or more poetical, depending on what I am wanting to say. Sometimes the text is already in the images and I just want to highlight it or emphasise it with colour and composition. Sometimes the text is added if I believe the piece needs more information to explain what it is about. This varies from piece to piece, there is no rule. I place the image on my work table and work on it until it is complete. I am totally open to using all the resources I may have at hand, visual, narrative, textual, musical, whatever it takes, to make the work more interesting, emotional and poignant. My mission as an artist is to make work that generates emotion and thought.