ART AFRICA attended the conversation titled ‘Is It Djinn?’ between Kuwaiti music producer and artist, Fatima Al Qadiri, and Global Art Forum Commissioner, Shumon Basar, at the Global Art Forum as part of Art Dubai 2018. The discussion used the concept of Djinn, the Islamic notion of a mischievous force, as a point of departure for insight into Al Qadiri’s sonic understanding of the link between djinn, memory, and trauma in the war-stricken Gulf region.

Shumon Basar: What I thought we’d start with is one of the origins of Fatima’s musical language and in a sense a very important memory, not only for her, but an entire generation – several generations – in her home country of Kuwait. I’m going to show a clip from a CNN live transmission of the first Gulf War, whose code name was ‘Desert Storm’ – this is from 1991. Some of you may remember this, some of you may not remember this, because you were born in this year, or born after it. I remember it very vividly – I was about fourteen or fifteen years old. I happened to have a television in my bedroom, and I remember one night, this came on CNN, and it just kept playing uninterrupted. This was the bombing of Baghdad done to punish Saddam Hussein for invading Kuwait a few months earlier. This was streamed live into our houses for hours on end, and because of time difference, often in the dead of night.

Perhaps you could tell us how old you were when this happened and how we get from this to something that we talk about, where you described that the times of war are often the most haunted of times.

Fatima al Qadiri: I was nine when the invasion of Kuwait happened. I think the thing that happens physically to a space when there is war is the abandonment of spaces. Of leaving a home, or running into a house that is not yours to flee aerial bombing. The invasion was on August 2nd in Kuwait, it happened to be during the peak of summer vacation, so there were quite a large number of abandoned houses – a number of Kuwaitis were out of the country at the time. There were many inside the country, but, for instance, a lot of members of my family’s homes were abandoned and were ransacked and that active vandalism, that really extreme vandalism – ripping up the furniture, defecation all over the houses. It was just on every single window pane, I can’t think of another word but it was – savage.

That is one element, but also, the warfare when you have bombs and guns, especially guns, or when you have a bomb land, the stirring of the earth; things are being stirred into motion. And the fear, the fear of animals as well as humans, the entire spectrum of life was living in fear of these attacks by, not just the actual weapons, but the sound. When Shumon sent me this clip, I hadn’t actually ever seen this footage. It was happening while I was in Kuwait, so when I heard the frequency and the sound of the bombardment was so specific, I listened to it for one and a half seconds and immediately slammed the space bar to put it on mute, and felt really dizzy and nauseous and had to lie down. I just had an episode, only from listening to one and a half seconds of this broadcast – this specific frequency. The shelling was so unique and ingrained in my sonic memory that it immediately recalled experiences that I had laid dormant. That specific sound. 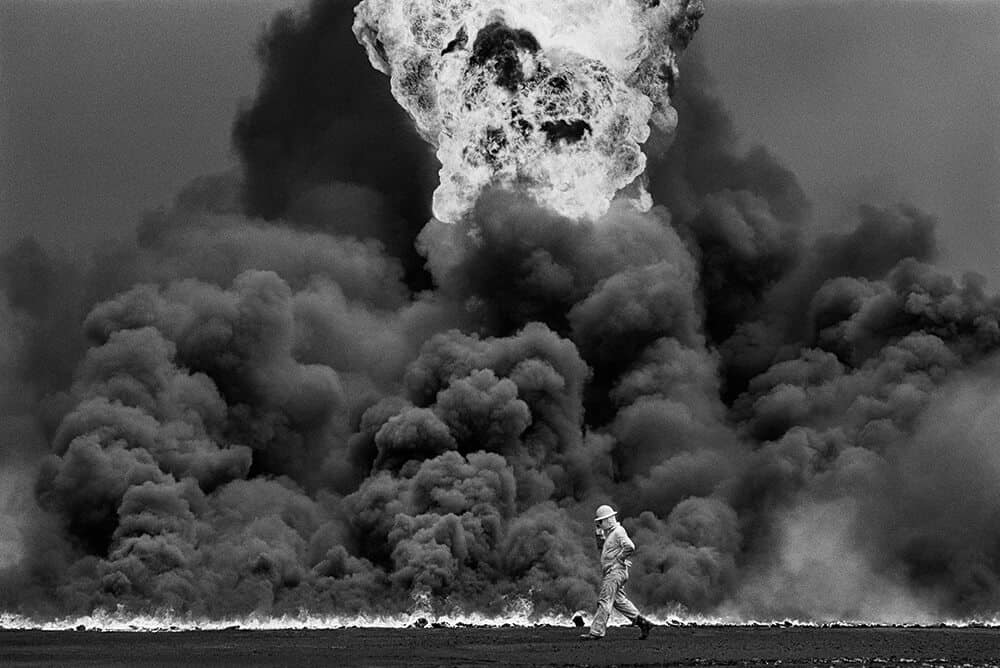 Following the devastation of Kuwait’s oil fields by Saddam Hussein’s retreating forces in 1991, Brazilian photographer Sebastião Salgado travelled to Kuwait to photograph the inferno. Some 700 oil wells and an unspecified number of oil-filled low-lying areas were set alight, causing one of the worst environmental disasters in living memory. Salgado wrote that “in all [his] long life, [he] never again found this kind of light – it was a Dantesque night.” © Sebastião Salgado

So this is about the 700 oil fields in Kuwait that were set alight by Saddam’s retreating troops. It turned the desert into a kind of hell-scape and the skies were charcoal black for half the year, if not longer. To the point where one of the people in the video talk about how their children are crying – their tears are black. Imagine that? This was entered into their systems to the extent that their tears became black. Fatima, I set this up because I wanted to ask about the psychological legacy of the invasion and the war, and whether trauma is a kind of haunting?

Oh it definitely is. I think that goes without saying, but I definitely feel like the haunting happens to people and it happens to buildings, there’s still so many buildings in Kuwait that literally have not been touched since the invasion and are laying in ruin. They’re an immediate reminder of the past but just like anyone, any invasion, there’s an ingrained memory that I think most people want to black out. Like a haunting – you want to block it out. The thing that brings up fear, which is a very primal emotion, a lot of people do their best to block out, or work through.

The Quran says that Djinn were created from Muharajin Mi’nar – smokeless fire or mixed fire, scholars explain that this is the part of the flame which mixes with the blackness of fire, they are not purely spiritual, but also physical in nature – being able to interact in a tactile manner with people and objects, and likewise be acted upon. The Djinn, humans and angels make up the known sapient creations of God. Like human beings, the Djinn can be good or evil, or mutually benevolent, and hence have free will like humans.

Fatima – Kuwaitis. They’ve believed in Djinn for a long time – do they continue to believe in Djinn?

I think that the topic, even though it’s mentioned in the Quran, is quite taboo, to be honest. People that do believe in Djinn in Kuwait, and I think other Muslim countries, have a tendency not to want to talk about them – because they inspire fear, they’re fearful conversations. Those that don’t, mock the idea of the existence of Djinn – there is no person that has a neutral opinion of Djinn.

Speaking of voices, this is one of your early tracks ‘Desert Strike’ and what strikes me very much about the way in which you used voices during this time is this overtly synthetic quality. There’s obviously the link back to the sounds of war – and you’ve done a BBC radio documentary about the sounds of war – but could you say something about this quality of voice, particularly in this time of making music? And what does that tell us about your relationship to machines and technology, and whether you see them as tools or something else? Do you see it almost as its own form of intelligence presences – or even Djinn?

I became quite obsessed with Gregorian chant during this time and playing video games on the Super Nintendo – and in Nintendo, there were a lot of fake choir sounds.

I’m not a singer, but I always wanted to use the human voice in some way, but also without words and without a person. I wanted to create a standalone human voice – like Sony is trying to do. But I still think my music – especially in this record – using these gunshot sounds, they’re still very, very stylized. It’s the difference between an oil painting of a figure and an in-real-life human being. Because I can’t use the real sounds of war, they trigger me. I know composers have used them, but I don’t know how many of them have actually experienced war. I think the relationship with that sound is really interesting – I had to use fake sound effects to create the stylized idea. Also to reclaim that time in my memory.

Born in Senegal and raised in Kuwait, Fatima Al Qadiri is a composer and conceptual artist. Currently based in Berlin, Germany, Al Qadiri is interested in the experience of war, memory, Western perceptions of other cultures, and socio-cultural identities – exploring these notions in her work. To date, Al Qadiri has produced two albums, ‘Brute’ (2016) and ‘Asiatisch’ (2014).