Anna Stielau reviews Zemba Luzamba’s solo exhibition, ‘It Is What It Is,’ at EBONY, Cape Town. Luzamba was born and grew up in Lubumbashi, DRC during the 1970s. Due to rampant civil war back home, the artist decided to move to South Africa, where he has lived and produced art since 2000. 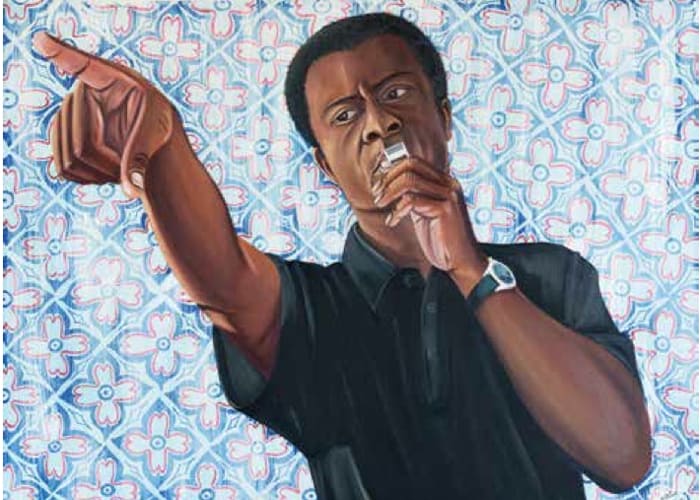 The idiom ‘It Is What It Is’ has a strange circular logic of its own. No one needs to know exactly what it means in context. Like all clichés, the phrase is repeated so frequently it divests itself of meaning, creating a kind of rhetorical void that replaces thought. It’s versatile and acutely banal, asking only for resignation to circumstances just as they are. In this, the words jostle against other tired tautologies like ‘same old, same old,’ and ‘what’s done is done’ – each a fatalistic, seemingly intractable claim to truth that brooks no argument and allows no action. If it is only what it is, after all, it can be nothing else.

Entitled ‘It Is What It Is’ Zemba Luzamba’s solo show at Ebony (Cape Town) seems, at first glance, to offer a fitting home for the cliché, less because of the phrase’s ubiquity than its affective flatness. The exhibition extends an ongoing theme in his work: the mundane rituals of everyday life. Whereas previous paintings have focused on, among other things, the leisure activities of the black middle classes, ‘It Is What It Is’ draws primarily on the minutiae of political life lived in the public eye. Luzamba hones in on a subtle gestural repertoire composed not of dynamic action but of the knowing smirk, frown and bowed head. In particular, he has an eye for those moments that disrupt the pageantry of political exhibitionism, isolating the finest cracks in the façade of an otherwise carefully orchestrated media event.

In First Lady (2015), a poised woman reads a speech into a microphone. The title suggests her status, as does the military guard standing stiffly to attention immediately behind her. She’s depicted tight-lipped, as if between words. Flat planes of colour and simple tonal gradation – evoking the stylised visual language of barbershop signage – compress pictorial space in such a way that the soldier seems threateningly close to the speaker and her microphone disproportionately large. Behind her, shadowy listeners assemble. Together with the otherwise featureless terrain, this audience grants the image the air of a stage, arguably exposing the theatricality of politics itself. 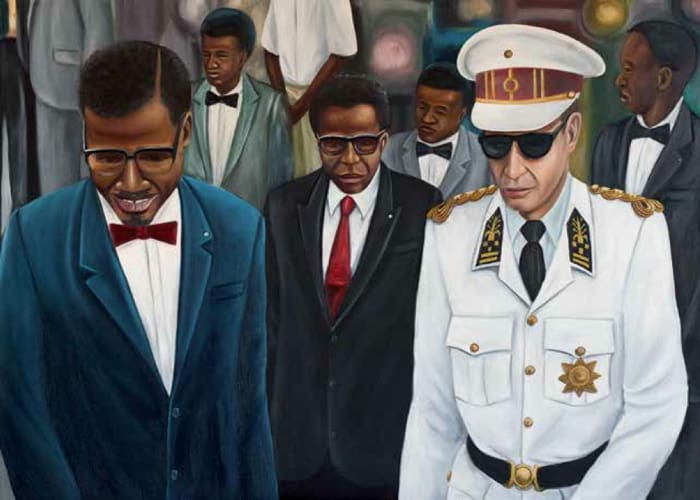 Luzumba appears fascinated by surface, shallow political performance and painted canvas alike. The First Lady is depthless, afforded only a title – she could be any and all First Ladies – and no further context. She’s not alone. Evacuated of historical, social and cultural specificity, many of Luzamba’s figures are little more than placeholders. Each seems to operate like a cliché, a free-floating yet immediately recognisable abstraction onto which meaning can be projected. Even events, from the celebration in Independence Day (After Independence = Before Independence) to the parade in Red Carpet, are both general and disconcertingly familiar.

Luzamba scripts an African political experience that transcends national and cultural borders. He’s uniquely positioned to do so. DRC born, Zambian educated and based in South Africa, the artist has experienced the impact of multiple regimes first hand. With care he bares their mechanisms, exposes their similarities and examines their archetypes.

The show does not dwell didactically on the negative. ‘It Is What It Is’ also begs the question: if this is what it is, what might it become? Making several appearances in these paintings are exquisitely dressed sapeurs, collectively hinting at the possibility of a different investment in appearances operating alongside the closed system of mainstream politics. A Congolese trend that has gained traction globally, Sapeur style hyperbolizes the performance of self. Its popularity among the working class makes fashion an art and that art a cultural comment, turning the management of image – unlike the restrained performance of the First Lady – into an aspirational gesture directed toward a different future. Surfaces become the arena in which fresh politics play out.

Like the figure in his aptly titled Whistleblower (2015), Luzamba calls out the similarities between past and present. He volunteers an expansive critique that, despite first appearances, remains open-ended. It might be what it is, for now. But the artist reminds us of another more optimistic tautology: it ain’t over ‘til it’s over.

Anna Stielau (b. 1989) is a writer and professional student.