It’s life, and life is wonderful Denis Goldberg, pictured at home in 2010, plays “Nkosi Sikelel’ iAfrika” on the penny whistle he was given while in Pretoria Central Prison. He used to play the song the night before comrades who received the death penalties were taken to the gallows. Photographer: Ivor Markman, Weekend Post.

Denis Goldberg sadly passed away last night at his home. Born on the 11th of April 1933, this struggle stalwart, activist and member of Umkhonto we Sizwe, fought for freedom in South Africa. We pay tribute to this remarkable man and celebrate his life. Our condolences go to his family and friends, and we wish you strength at this time.

“It’s life, and life is wonderful.” These words of optimism were called out to his mother when convicted Rivonia trialist Denis Goldberg heard the sentence which was passed down at the trial for high treason for their fight against apartheid. Alongside Nelson Mandela and others, they had expected to be executed – instead, the sentence was commuted to life imprisonment. He served 22 years in jail.

After returning from exile in 2002, Goldberg settled in Hout Bay, a suburb of Cape Town, South Africa. His life served as a social activist gave him the insight that the preservation and understanding of cultural heritage are essential in promoting tolerance, debate, justice and multiculturalism. Besides other initiatives, Goldberg became involved with the Hout Bay museum where he assisted in the research of the social history of Hout Bay.

Goldberg started collecting art when he returned, fuelled by his passion for arts and culture.  His home is crammed from ceiling to floor with over 200 artworks. Some gifted to him by artists, in gratitude for the sacrifice he had made, others purchased from artists to support their activities.

Always an optimist, Goldberg saw the arts as a way of drawing divided communities together and healing the wounds of years of suppression and poverty that many South Africans had experienced for so many years. Hout Bay reflects a microcosm of the realities of life in South Africa. Segregation still exists, poverty and a lack of access to resources live alongside wealth and privilege. He believed that art and culture have the ability to bridge this divide and bring people from disparate backgrounds together. 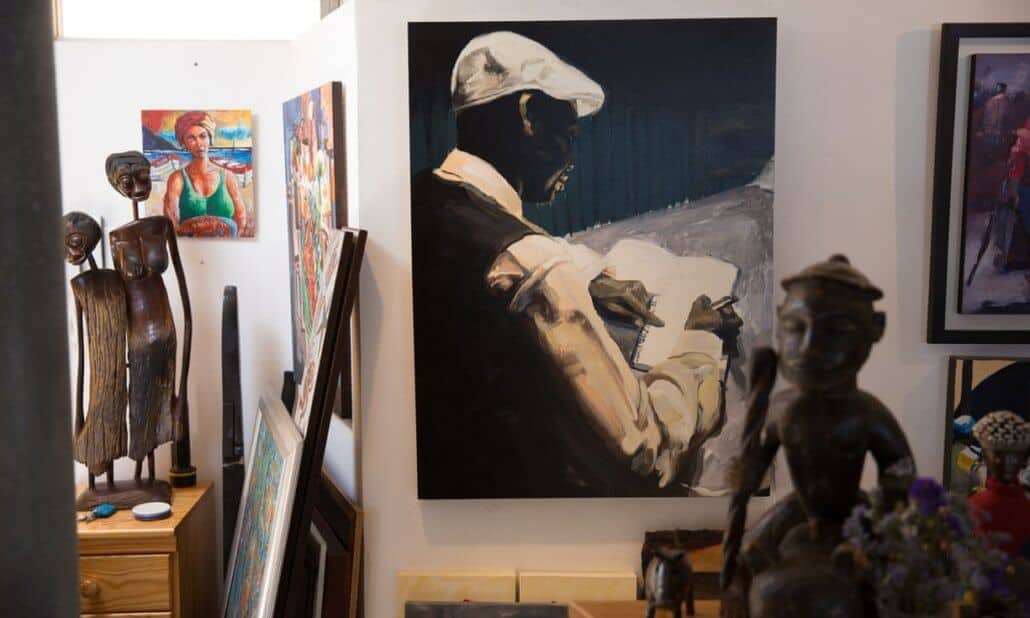 Goldberg’s home is crammed with African artwork that bursts with bright colours. It’s as if he’s making up for more than 2 decades of drab prison life. Photographer: James Oatway, The Observer

With this conviction, Goldberg founded the Denis Goldberg Legacy Trust with the vision of building an arts and culture centre in Hout Bay, Cape Town, Sout Africa. As he explains: “It is a vision that combines the passions of my life: the creation of cohesive, non-racial and non-prejudiced communities, the realisation of young people’s potential and a celebration of creativity and expression… Creating a beautiful space for this to happen, where young people can develop those vital creative and expressive skills will be my lasting contribution to the future of Hout Bay, which has been my home for so long.”

The Denis Goldberg House of Hope Arts and Culture Centre, situated at the Hout Bay museum, will provide art and culture education and be a training centre for the youth of Hout Bay. His vision was to bring people together through culture, music, performance and the visual arts: to bridge the divide and promote social cohesion and understanding. The centre will house the Goldberg art collection appropriately titled “Life is Wonderful” and other memorabilia that he had collected.