The latest in this style and series of exhibitions is James Webb’s MMXII, though the artist prefers to call it a metrospective. “For me, the retrospective looks back, while the metrospective looks everywhere,” explains Webb. In the multiple rolls of ‘metro’ and ‘spective’, and the ironic gravitas of his Roman numerals, straight out of a film’s end credits, the invitation, even before the exhibition itself, announces the matter-of-factness of much of Webb’s sonic playfulness.

The centrepiece of this exhibition is surely the last work in the artist’s varied occupation of an entire ground floor of JAG. With its long red carpet filling the Phillip’s Gallery, Prayer (Johannesburg) is a city-specific sound piece that collects and mingles religious prayers into an intoxicating array of apparent calls and responses. This is the seventh iteration of a piece that has been produced in South Africa, the United Kingdom, Norway and Denmark, each time recorded from scratch in local communities. The complexity of the piece is sharpened by Webb’s arrangement of the speakers, low on the ground, inducing viewers to bend down, around and over the sounds, choreographing and embodying a performance of spiritual listening.

Curatorially, if Prayer is the far bookend of the exhibition, then Le Marché Oriental (2009), the first large-scale work in the exhibition, holds up the other end. It echoes Prayer in being a video set to the soundtrack of a call to prayer. In engaging these multiple sounds of religion, Webb shows the influence of his undergraduate major in religious studies. While the sounds that constitute Prayer might come from somewhere, the particularities of place are not on display in the installation.

Part of the power of Le Marché Oriental is its located-ness in the machinations of apartheid’s distortions of space. When District Six was bulldozed, only the Moravian Chapel and the Zeenatul Islam Majid mosque were left standing. Cape Malay traders were hoarded into an apartheid shopping mall called the Oriental Plaza. In asking the Zeenatul mosque’s Sheikh Mogamat Moerat to sing a call to prayer inside the derelict and about-to-be-demolished Plaza in 2008, Webb creates a poignant lament to the destruction that has gone before.

Like Le Marché Oriental, which navigates the experiential difference between listening in a language you understand and listening to one you don’t, Webb’s Aleph (2010) is a series of recordings of the phenomenon of glossolalia, or speaking in tongues, that plays with the relationship between the gift of speaking in tongues and the concomitant gift of interpreting these tongues. Here the sound itself holds the drama of the event.

Webb’s schoolteacher told him that Picasso’s Guernica is the most important piece of art in the whole world. He had to rely on his teacher’s word and a reproduction in Helen Gardener’s Art Through the Ages. Webb’s Scream (2008) is an installation that is less interested in what his teacher might have said and more concerned with awakening the sonic potential of a painting prompted by the events of the first complete destruction of a European town by aerial bombardment in 1937.

Webb’s sound piece is a wrenching series of screams, uttered by individual members of the Reina Sophia’s museum staff. In so directly connecting the screams to people who regularly encounter Guernica, it’s hard not to hear them as the brutal effects of the bombardment. It’s a reminder of how sound seduces so differently from images. The powerful effect of Webb’s work is not only his distillation of the double act of brutality – the original bombing and Picasso’s dismembered depiction thereof – into a series of high-pitched sounds, but also the pervasiveness of these sounds in JAG – they can be heard long before and after one sees the framed letter giving the artist permission to record the sounds in the first place. In the context of Webb’s practice, this audibility stands in for the original painting’s invisibility, wrapped as it is in ownership, copyright and the limited rights of reproduction and circulation.

MMXII is hugely successful in its curation and exhibition of sound. In the collation, mixing and re-mixing, and in the careful bleeding of sounds from differently located works to create poignant interruptions, Webb displays a fine ability to curate tonalities through time. Where the collation is uneven is in the artist’s selection of artworks from JAG’s storeroom and their placement in proximity to the sound pieces. Some of them work very well. Dalí’s White Aphrodisiac Telephone and Eserael Thavhana’s delicately carved coalescence of bird and snake, both from JAG’s collection, give resonance to Webb’s own Autohagiography (2007) – a series of recordings of the artist under hypnosis, emanating from speakers in a black leather chaise longue. But the claustrophobic placement of sculptures by Raoul Charles Verlet and Henry Moore in the sightlines of two of Webb’s own works does little for any of the works in the arrangements. 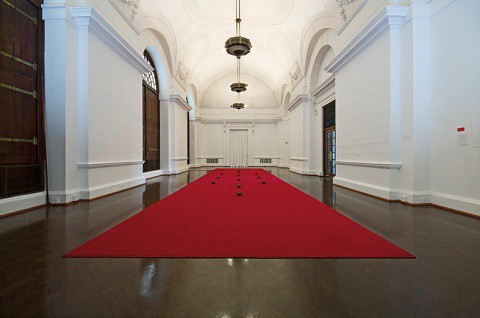 In its accumulation of sounds the exhibition subtly navigates the differences between the placement, transmission and broadcast of sound. Webb’s great-grandfather was a night watchman at JAG. In the darkness of his duties, sounds must have come and gone without always having physical references. And so too in the current exhibition there are a number of ‘secret’, or at least unannounced works, things you have to listen out for, and sometimes look for too – a bit of Morse Code embedded within a lamp at the gallery’s south entrance, the alien(ating) call of a White-Bellied Drongo, the effects of a cellphone jammer, the cough of a ‘tall dark stranger’, and a dimly lit ladder installed in a subterranean room. And that’s just within the confines of the gallery. The secrecy of these works mirrors the secrecy of sound itself, and the need to be attentive to what we cannot see. “I like the idea of an exhibition having different frequencies, as if one could tune into the different parts of a show,” suggests Webb. “If something is discovered by the audience, something that might not appear to be ‘art’ at first glance, I think it can augment their experience of the show at large.”   Rory Bester is Head of History of Art at the Wits School of Arts.