Jazz is my oxygen

‘Leeto: Sam Nhlengethwa’s Print Retrospective’ surveys the printmaking practice of Nhlengethwa from 1978 to 2018. Leeto is Setswana/Sesotho for ‘journey’ and, as the word suggests, the exhibition calls for a momentary pause to reflect on Nhlengethwa’s ongoing artistic footsteps. Nhlengethwa began his career in 1976 during that tumultuous socio-political era in South Africa. He subsequently completed a two-year diploma in 1978 at the Evangelical Lutheran Church Art and Craft Centre, Rorkes Drift, in Kwa-Zulu Natal, where printmaking featured prominently. ‘Leeto’ highlights Nhlengethwa’s artistic practice of printmaking that he mobilises for self-expression, creative and intellectual engagements, collaborations and a site for conversations with the broader public. 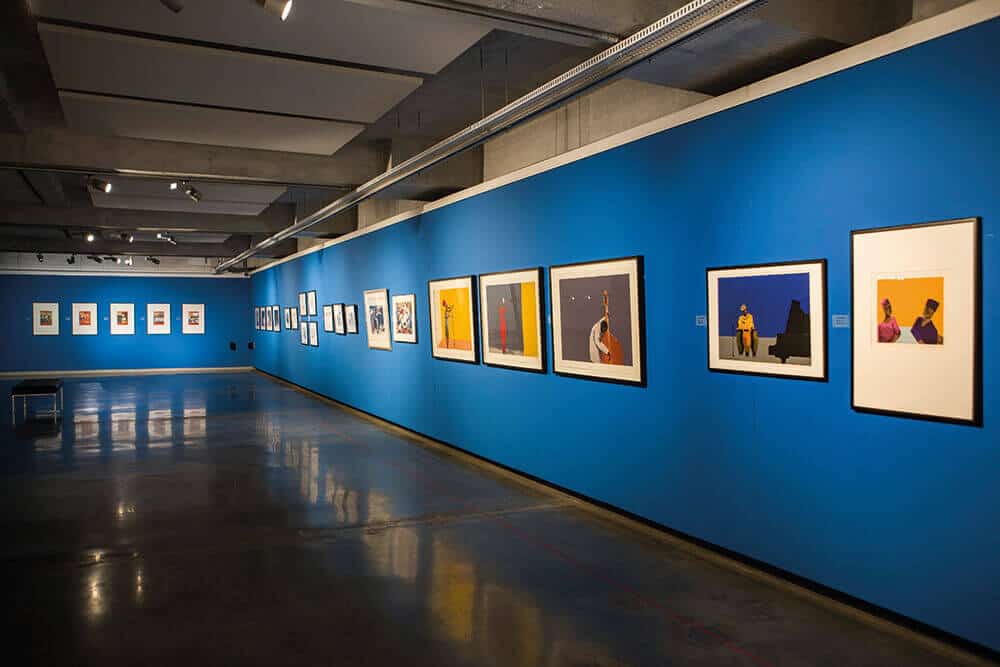 Nhlengethwa remarks on his retrospective at the beginning of our interview, “It’s more like a journey into printmaking since my time at Rorke’s Drift. My first print, which was my first and only silkscreen ever produced over the years, talks to my experiences at Rorke’s Drift. I really enjoyed my years there a lot and produced the work during my second year there.”

When asked about his love for printmaking and how prolific his practice has been he answers, “When I looked at the entire show I got so tired [he laughs] – I couldn’t believe that I did all this over the years, but it has been fun. I am pro-print making, so I hope people enjoy that.” 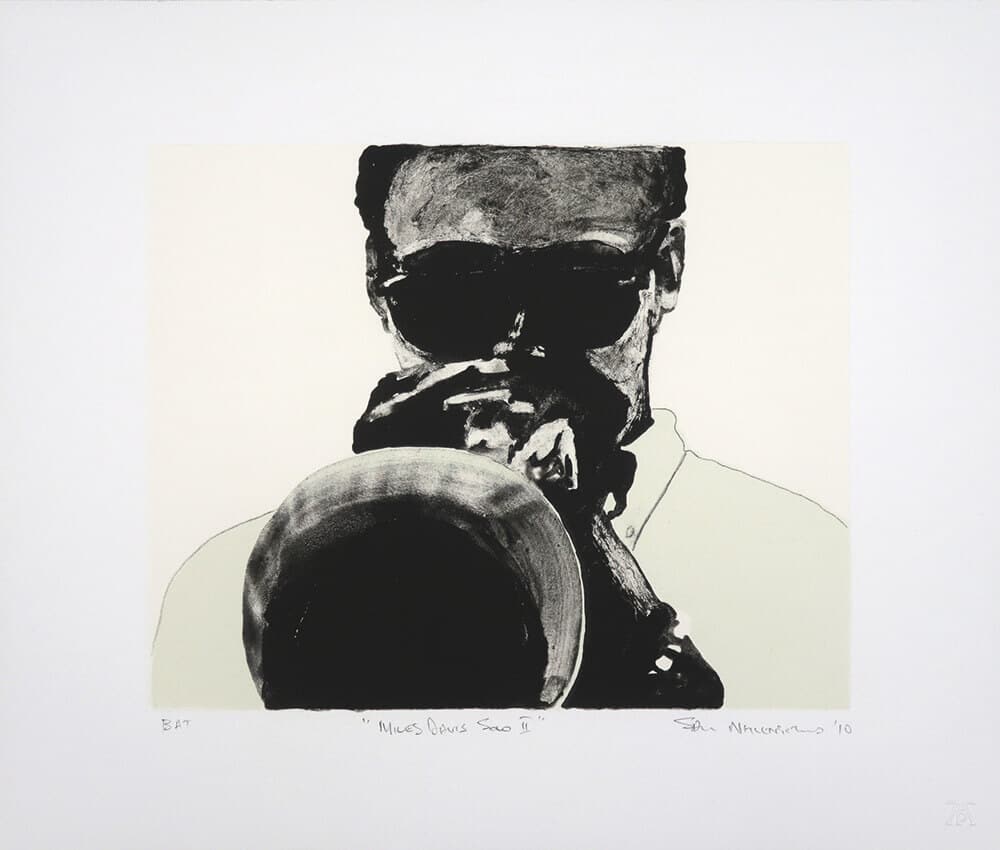 Jazz, Nhlengethwa’s great passion, is a recurring subject in many of his works. It is also the underpinning theme for the exhibition and offers possibilities for a deeper understanding and reading of his oeuvre. An early influence in Nhlengethwa’s works was the underground township jazz community. Nhlengethwa’s brother was a jazz musician, and this inspired him to begin collecting jazz records at the age of 17.

‘Leeto’ explores the connections between art and jazz cultures found in his images. These portray some of the jazz musicians who are influential figures in South African and American jazz histories. These links can also be found in his artwork depicting the everyday experience of many black people living in Johannesburg inner city and the townships and positions jazz in these spaces. Furthermore, the exhibition suggests that similar to the workings of jazz improvisation, Nhlengethwa’s work develops through the interaction of these ever-changing communities.

His work also takes us on a 40 year-long journey through the history of South Africa’s struggle for independence in the context of the broader liberation of the continent.

Nhlengethwa explains, “As you enter the space at Wits Art Museum (WAM) there are three pieces that are jazz-related because jazz is my passion, my inspiration – jazz is like my oxygen – because I can’t paint or do anything without listening to jazz.”

Asking the question “What else can Nhlengethwa’s images offer us?”, the exhibition presents a collection of Nhlengethwa’s print work to be interrogated, his artistic evolution to be mapped out and his personal aesthetics to be interpreted. His work also takes us on a 40 year-long journey through the history of South Africa’s struggle for independence in the context of the broader liberation of the continent.

Nhlengethwa elaborates on this in the context of his retrospective exhibition and the various thematic groupings of works. “As we enter the museum I have jazz pieces – I remember very well, the one is a tribute to Thelonious Monk who was one of the greatest composers and piano players. There are also interior pieces, which pay homage to various artists. There are monotone pieces that give a glimpse into the ‘50s and the ‘60s. There is also a great series about Mzansi legends, a lino that I did four years ago. It’s more like a journey into printmaking since I was at Rorke’s Drift. 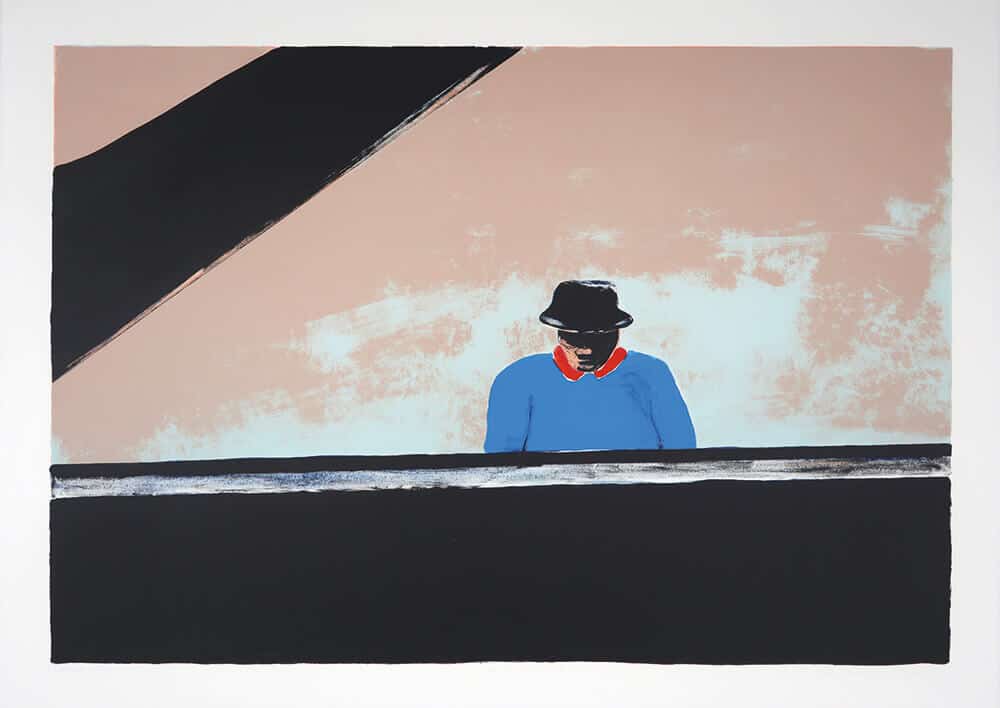 Going further into the exhibition there are prints that are a tribute series – dedicated to artists who really inspire me, one way or another – there is a tribute to Zwelidumile Geelboi Mgxaji Mslaba “Dumile” Feni, Marlene Dumas and William Kentridge to name a few, I am inspired by my colleagues all the time. Up into the next space is a continuation of the tribute series – quite a number of them in fact, but to name a few,  Robert Hodgins, Peter Clarke, Judith Mason, and David Koloane, who sadly passed away on the 30th of June this year.

On view on the ground floor before you move to the upper level is a wall which is dedicated to depicting our socio-political life in South Africa in the ‘50s and the ‘60s that give us glimpses of our lives during that era. Opposite that is a big grouping that references Mzansi Legends where I highlighted a few people that contributed to the apartheid struggle. I’m talking about [Nelson] Rolihlahla Mandela, and people like Walter Sisulu and Beyers Naudé – people who were fighting very hard for a better life for everyone in the country.

There were also important people on the cultural side like Bill Ainsley, people like Chris MacGregor, you know, those people all played a major role in re-shaping this country in one way or another. 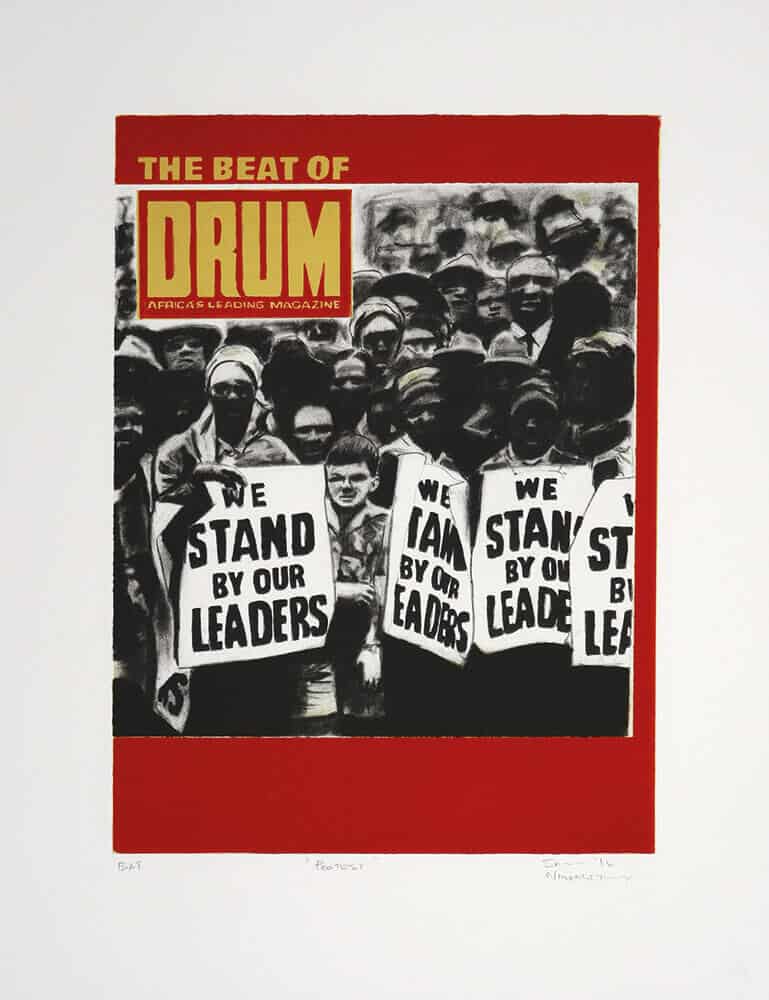 I also paid tribute to DRUM Magazine, an important part of our struggle history. DRUM was a key resource then educating many of us around the struggles and life in South Africa and on the continent touching on countries like Uganda and Zimbabwe too. These works really reflect my thinking about what shaped me as a person growing [up] in South Africa – and what I learned. DRUM educated me, so paying homage to the magazine is part and parcel of who we are in this country.

I also touch base with other musicians like Gideon Nxumalo and Victor Ndlazilwana. Very few people know who Victor was. He was a member of one of the first jazz groups that went to Newport Jazz Festival with Johnny Mekoa.

My retrospective is not just about printmaking but also about tapping into our past and educating the youngsters about our background and our country’s history. I suppose I attempted over the years to rewrite, or should I say ‘reprint’ our history.”

Can you tell us about what to expect from Sam Nhlengethwa in the near future?

I have been thinking a lot about Ponte tower, this unique building which is of great sentimental value to many of us who grew up in Joburg, and to many who have visited the building from overseas too. I was contemplating how to tackle it, which angle, and then the other night I was working until late, and it came to me – I wanted to chill on the rooftop – and BOOM I was confronted by this Ponte building, and I said, now I know what I’m going to do about it I’m going to do Ponte at night. So that’s the first building in the series that I completed. We also know about the history of Constitution Hill, and I would have made a big mistake leaving Constitution Hill out of this series. My second piece has a focus on the northern wing because I’m doing two pieces on the building because I think Constitution Hill is amazing, so at the moment, right now, I am busy with Constitution Hill. 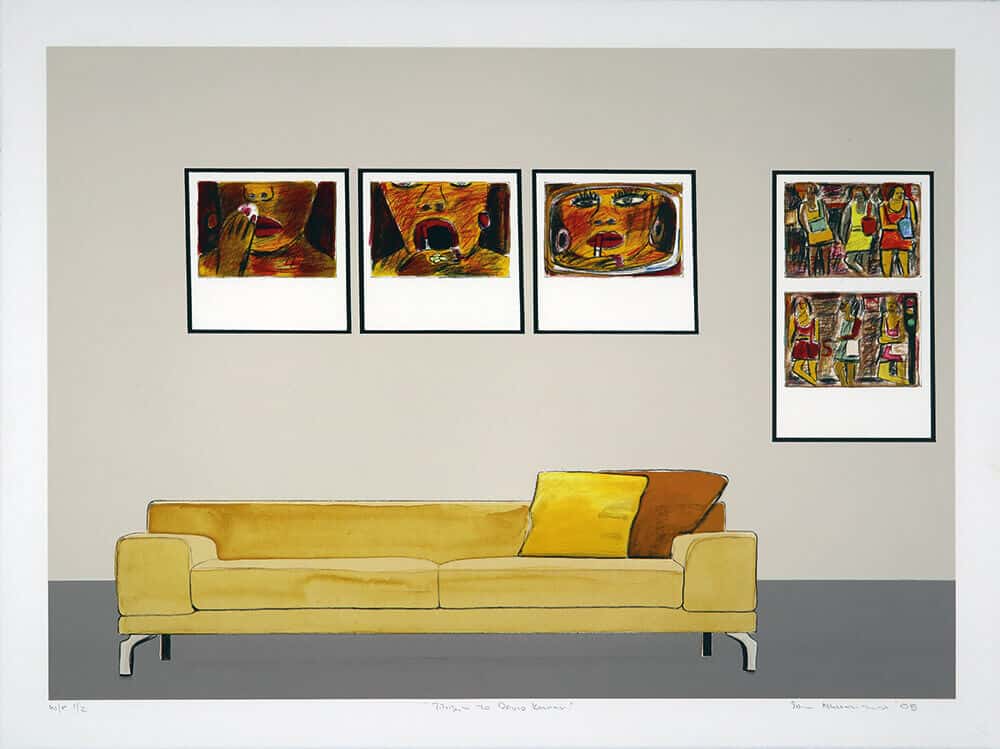 Can you share any personal insights with regards to your history as an artist and what young artists today are up against trying to build a career for themselves?

I think the interesting thing about the art scene in South Africa today when I consider my career and look back to the beginning, compared to the younger artists starting off – there is a lot less effort needed by them to succeed because they have the support and learnings of our history to guide them. Where we had to make ends meet with no existing marketplace systems and limited resources, they are far more fortunate. They need to embrace this opportunity with open arms and not take things for granted. As I said at David Koloane’s funeral – when we took that baton and made sure not to drop it, and now as we pass it onto the younger generation, we need to safeguard our heritage – so I hope that the youngsters get it right.

This text is derived from the curator of ‘Leeto: A Sam Nhlengethwa Print Retrospective’, Boitumelo Tlhoaele and an interview conducted by Brendon Bell-Roberts.

The exhibition was on view at the Wits Art Museum, South Africa, from 11 June until 17 August 2019.