The Joburg Contemporary Art Foundation slipped into the South African arts ecosystem with quiet and meticulous precision. It is an arts institution that does not intend to own any art or house any private art collection. Instead, its focus is to encourage discursive and contemplative experiences between people and art. 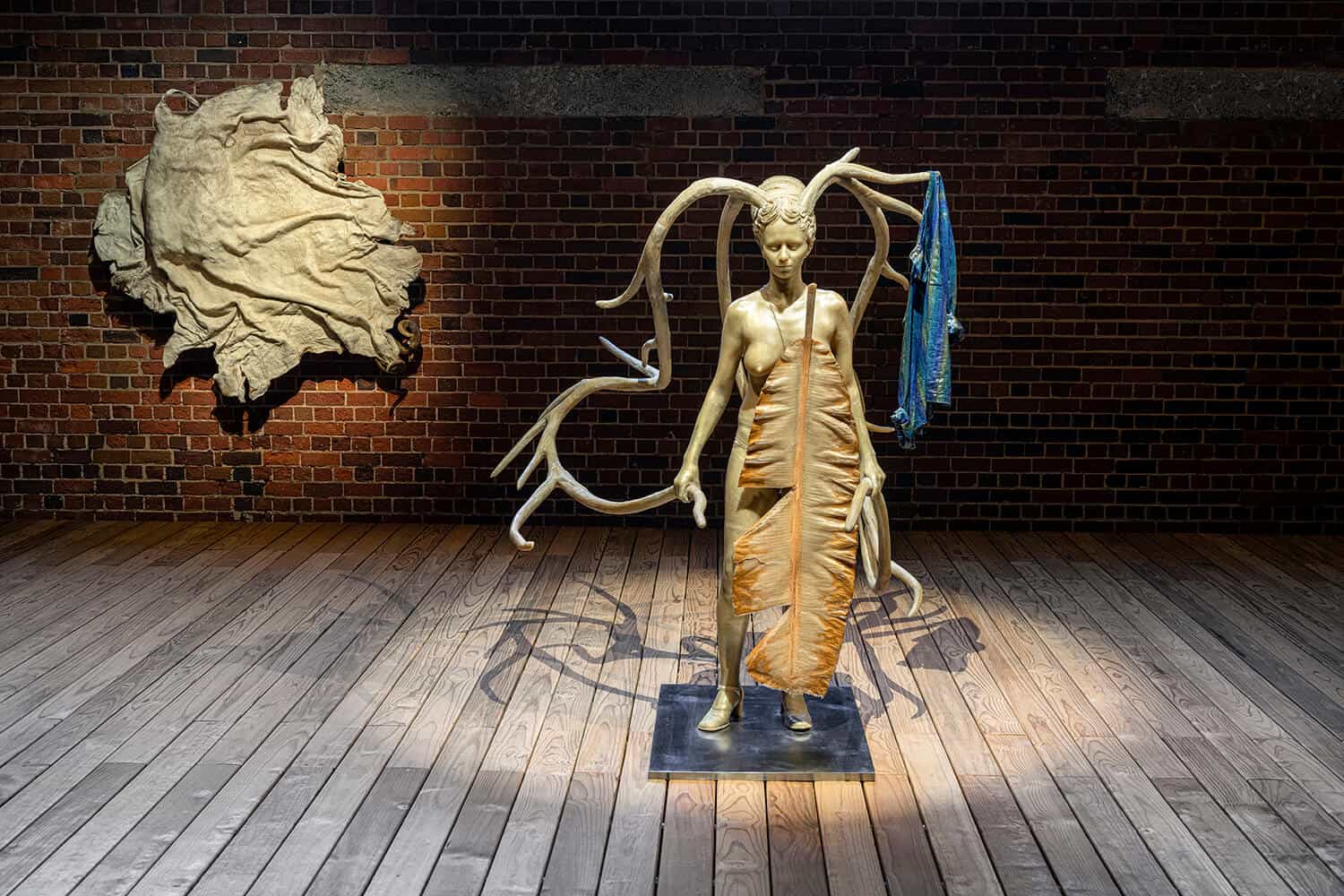 Knowledge sharing and exhibition affect take centre stage, with multiple entry points for visitors to engage with modern and contemporary art in the context of the city.

Described as a ‘hybrid institution’, the foundation merges academic research with innovative technology and thought-provoking exhibitions intended to appeal to a wide audience. Knowledge sharing and exhibition affect take centre stage, with multiple entry points for visitors to engage with modern and contemporary art in the context of the city. The launch of the space earlier this year set the tone grouping together the intellectual, the culinary, and artistic in its programme. Following on from this JCAF presents its inaugural exhibition Contemporary Female Identities in the Global South featuring a variety of works by Nandipha Mntambo (South Africa), Bharti Kher (India, UK), Wangechi Mutu (Kenya, USA), Shirin Neshat (Iran, USA) and Berni Searle (South Africa).

This show is the first instalment in a three-year-long thematic direction exploring Female Identities in the Global South. The trilogy of exhibitions will reveal methodologies and formations of identification expressed through artworks within specific temporal frames, beginning in the contemporary. This stretching of an umbrella theme over a longer period of time allows viewers to visit each exhibition multiple times, absorbing the energy of the artworks and the space anew each time, pulling threads across the formal and conceptual foundation embedded in each work. Contemporary Female Identities in the Global South can be viewed from 16 September 2020 to 30 January 2021, inviting an extended, slower reading of the exhibition, letting thought and feeling brew. 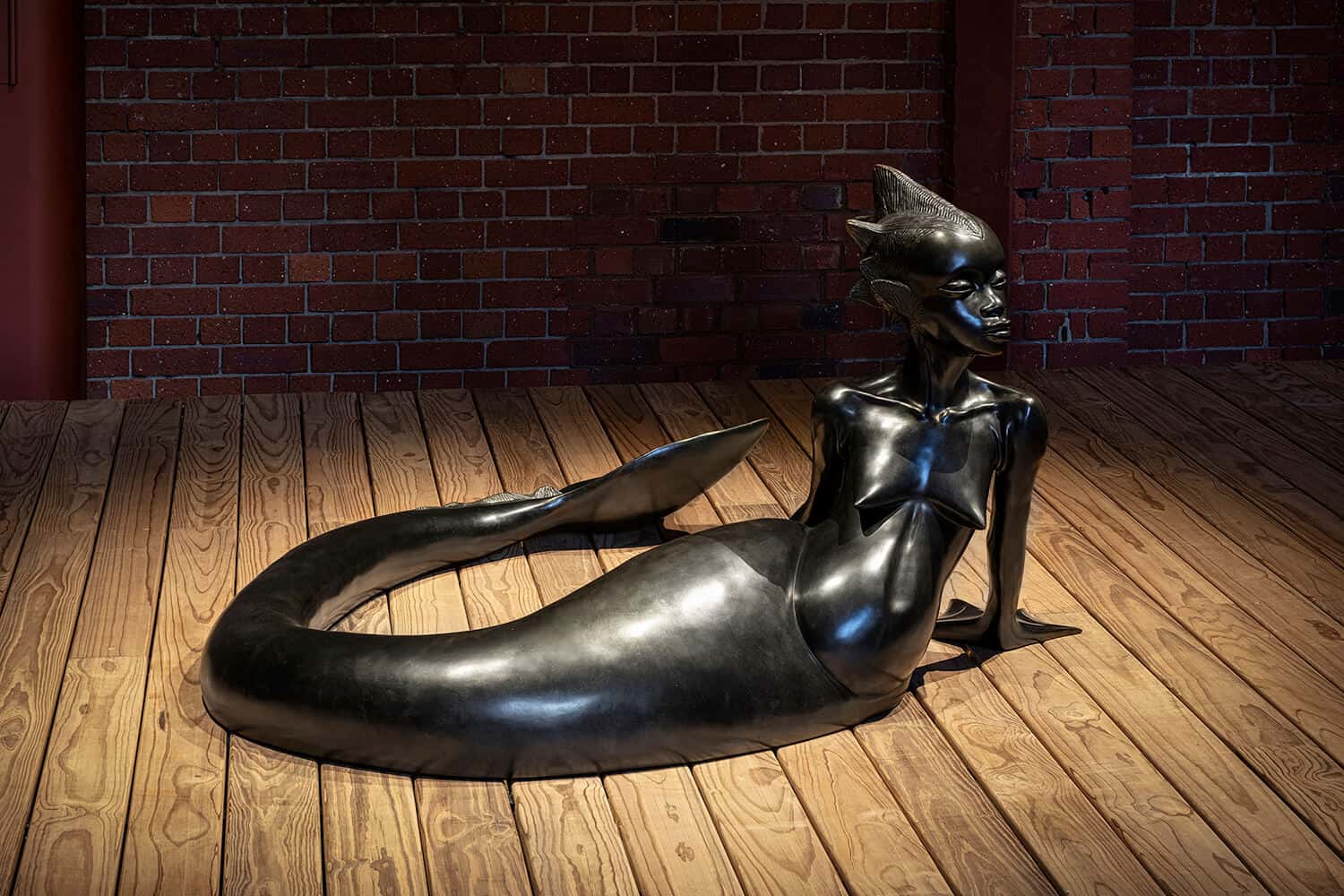 The JCAF app offers a continuation of the exhibition experience into the digital realm offering an additional layer of engagement, moving away from traditional artwork labels. By downloading the app or using the app installed on the iPads supplied at JCAF, scanning the beacons placed between works viewers are able to access contextual information while moving through the space. This allows for another form of intimate contemplation, where internal conversations and real-time experiences of the work are supplemented by the screen-mediated interface – a partnership between personal experience and engagement with exhibition collateral through the use of digital tools.

Hybridity is the central thematic thread pulled across the three sections in this show. JCAF executive director, and the exhibition’s curator, Clive Kellner shares how this was inspired by Nandipha Mntambo’s mythological figures, Bharti Kher’s Self portrait (2007) combined with Wangechi Mutu’s bronze sculpture Water Woman (2017). Hybridity is also present in the lived experiences of the artists, with Mutu, Kher and Neshat living between the Global North and Global South, where a women’s existence requires a multiplicity of roles and self-representations. 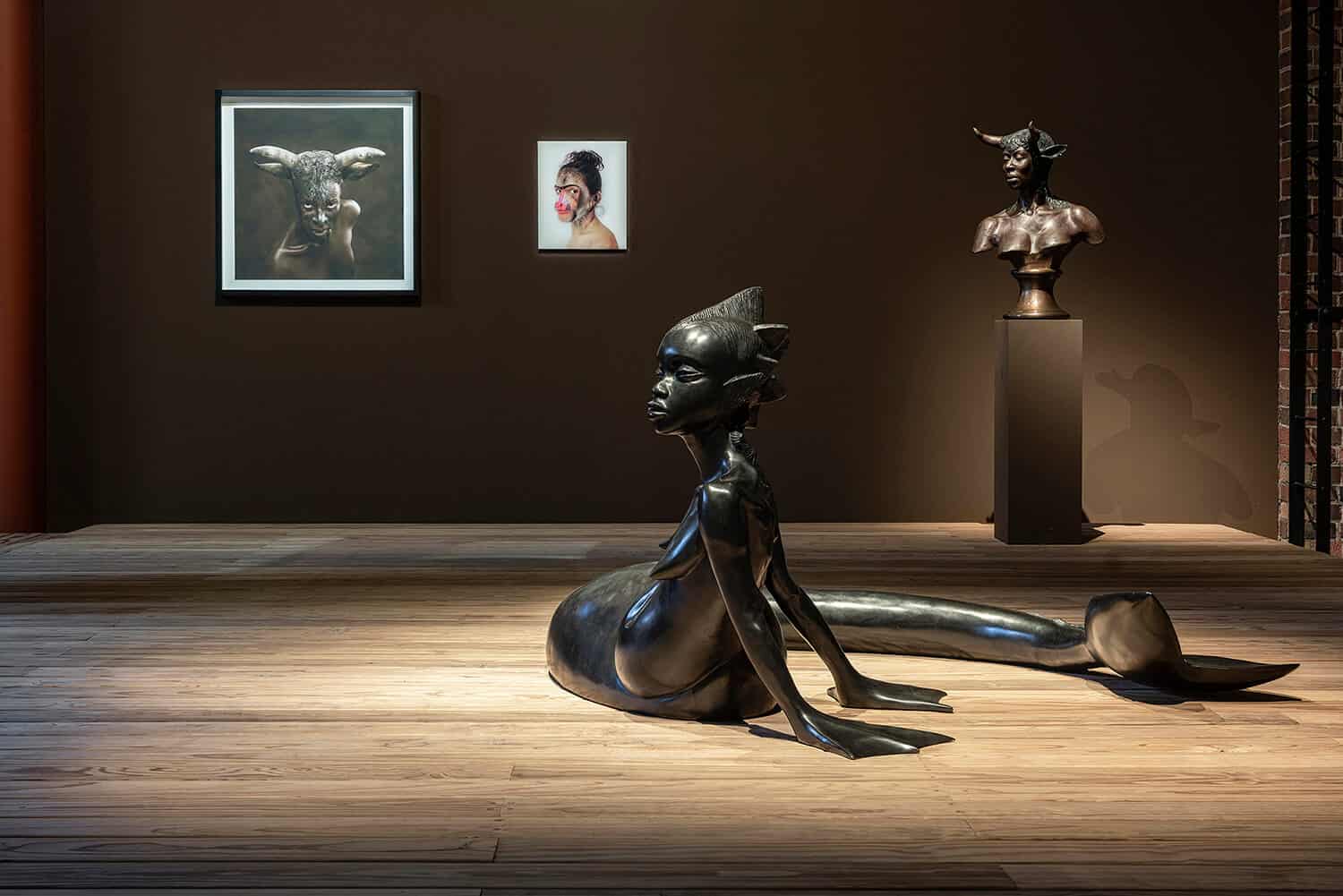 The first section of the show points to the meeting of human and nature. Kher’s Warrior with cloak and shield (2008) is in the centre, a life-size female figure with large antlers growing out of her head, curling behind her back like angel wings, and completing their half-moon journey in the figure’s hands where they are grasped like spears. A banana leaf acts as a shield, providing symbolic protection that draws on Hindu tradition. Here the heavenly and nature amalgamate with the human, not only through the figure’s form but also through the Mary Jane shoes on her feet and shirt hanging off one of her antlers. Kher’s warrior is experienced with Mutu’s collage A Dragon Kiss Always Ends in Ashes (2007), a piece that speaks to deliberate self-representation and self-production. The female figure in the collage is presented kissing a serpent, referencing that which is considered forbidden as in the biblical interaction between Eve and the snake. Here, the figure takes full ownership of her agency and desires, becoming a warrior in that sense.

Mntambo’s What Remains (2019) is the third work in this section, a cowhide sculptural work that hangs off the brick wall. The female figure suggested by the draping of the hide highlights a meditation on loss and absence, with a haunting characteristic. These works occupy the same space as Searle’s photographic series Lament (2011) and Neshat’s The Book of Kings (2012), artworks connected to the section of the exhibition that tackles the real, human world. The motif of the veil is present in Searle’s series, which was created in relation to the Gothic Chamber in Bruges’ Town Hall. Here the veiled figure of the artist speaks back to the imperialist history of Belgium, forcing an acknowledgement of plunder, destruction and extraction. It forces an acknowledgement of lives lost, bodies deformed and cultural spirits attacked, the artist’s gilded hands gesture prayer, shame, or sorrow as a reflection on this past. Undercutting the European ceremonial function of the Gothic Chamber, her body becomes the container of holy relics and silences the colonial subject. The Book of Kings sees photographs of women overlaid with inscriptions from Persian poet Ferdowsi and handwritten poems in Farsi from present-day Iranian poets. The visual nature of these inscriptions resembles the delicacy of the lace in Searle’s images. The Book of Kings consists of three sets of black and white portraits, titled Masses, Patriots and Villians. The three images shared in the show include Sheida Jafari (Masses) and Sheida Dayani (Masses), large-scale identity document-style photographs each with lighter inscriptions that appear as inked watermarks over the faces of the people represented in the images. The inscriptions seen in Nida (Patriots) is bolder, connecting to the possibility of a declaration being reinforced or an ideological affinity represented through the placing of the hand over the heart. An added layer of potency comes when reading this work in relationship to Mutu’s A Dragon Kiss Always Ends in Ashes (2007). The decisiveness of the figure represented and the denial of morality to be dictated outside of their own view of themselves. 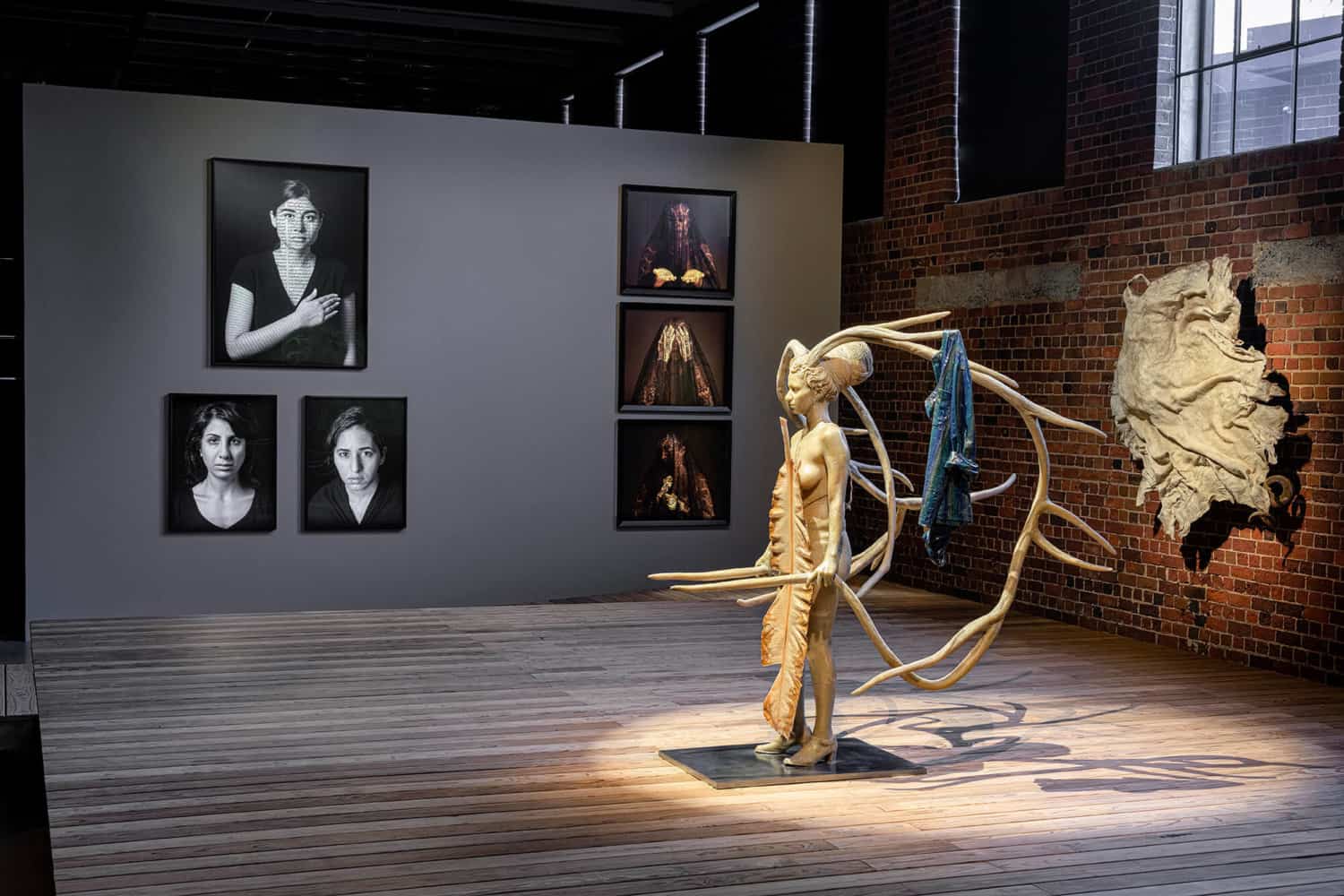 The second section of the exhibition sees the notion of hybridity heightened through the forms of figures and the connection between the works. Mutu’s Water Woman (2017) presents myth and mystery in cast bronze sculpture form. This siren figure references both the dugong, an endangered relative of the manatee found in the waters from East Africa to Australia, and the East African folkloric legend of the half-woman, half sea creature (nguva in Swahili). She is surrounded by Mntambo Europa (2008), her sculptural work Sengifikile (2009) and Kher’s Self Portrait (2007). All of these figures see the faces of the artists mixed or overlaid with animal features, conceptually engaging with the violence of colonialism, disrupting the linear, Eurocentric construction of history and artistic conventions. The viewer is forced to interrogate their own act of looking by considering figures presented in the works either looking passed the viewer or meeting the viewer’s gaze directly, implying a reversal of who is being observed. 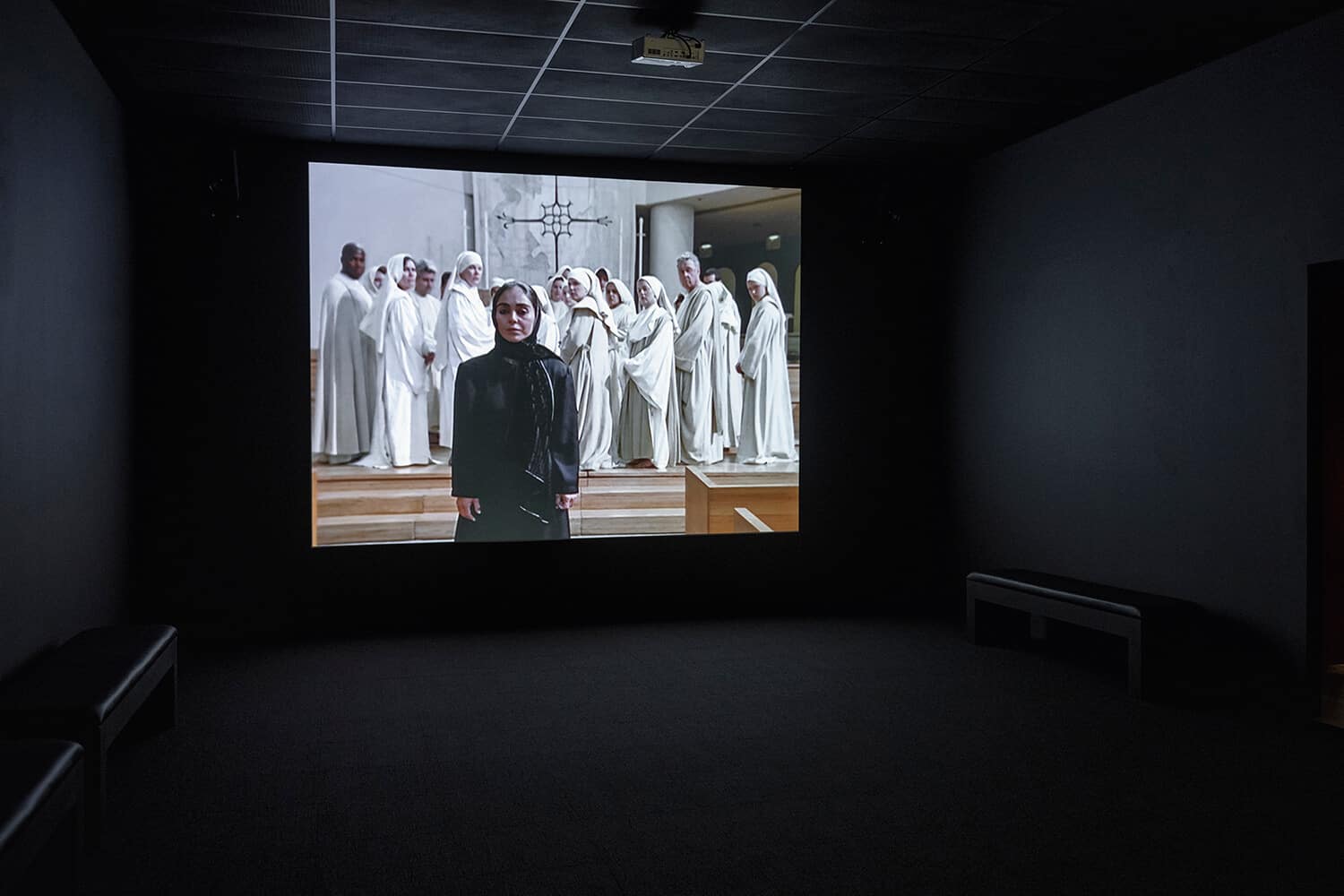 …hybridity becomes a softer entry point through which conversations around identity politics, tensions and ruptures rooted in the diaspora’s history…

Engaging with the exhibition as a whole and within the context of South Africa, hybridity becomes a softer entry point through which conversations around identity politics, tensions and ruptures rooted in the diaspora’s history can be unpacked. Here artworks sharing space together open up existing conversations and speak back to profound issues regarding race, gender, history and geography. Most importantly, through this programme, women are identified as the key figures through which this articulation of identity formation, mixing and representation are voiced. In this way, a fuller, more complex thinking around female subjectivity can be directed and reframing these narratives from new perspectives.

Christa Dee is a writer, researcher and emerging curator based in Johannesburg. As a writer, she focuses on art, urban studies, digital culture, speculative futures, identity politics, and the relationship between these categories. She currently writes for a number of arts & culture publications across the globe. As a researcher and curator, she has an interest in unpacking the multiple urban imaginaries that exist within Johannesburg, and how art spaces and curators are actors in city-making. She currently holds an Honours degree with distinction in Cultural Anthropology, and is working towards her MA in Contemporary Curatorial Practice.