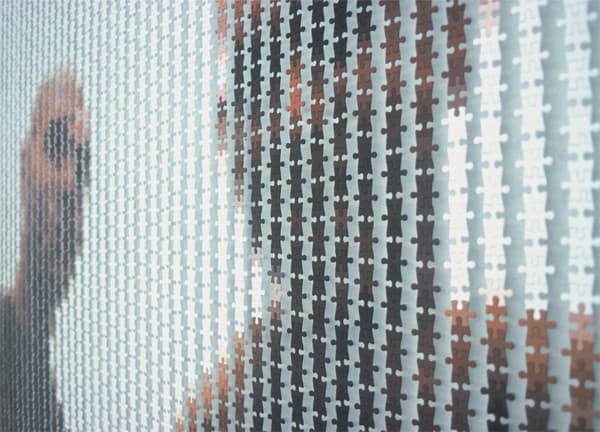 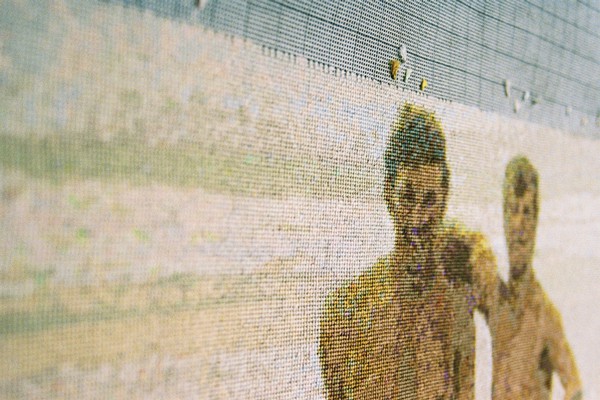 I first met Pierre Fouché last year during an open studios night at Greatmore in Woodstock, Cape Town. He was creating a small tapestry, laboriously weaving threads on a self-constructed loom. Another curious visitor declared herself more intrigued by the reverse side of the work, with its cobwebs of interlocked threads, than with the neat and tidy surface image. Her astute observation cut to the core of this artist’s work, which is essentially about undermining the fixity of how we choose to see the world – in particular, the false sense of assurance that domestic portrait photography conveys.
The artist’s exploration moves beyond self-absorption, however. Fouché twists personal subject matter to make a political point. He exposes the underbelly of relations we prefer to delete from memory in favour of a cohesive whitewashed whole. And he manages to achieve this rather surreptitiously: one of his recent portraits of himself and his boyfriend now apparently hangs in a family restaurant in London – much to the artist’s satisfaction.
This work formed part of his latest solo at Bell-Roberts, The Distance Between Us. Fouché digitally manipulated everyday portraits of himself and loved ones into patterns that served as templates, subsequently translated through a labour of love tinged with madness into obsessively created works comprised of thousands of dice, puzzle pieces or interwoven threads. The net effect is a quirky subversion of normativity: an image at once both familiar and disturbing. His handcrafted aesthetic also contradicts a contemporary taste for mass-produced objects, outsourced labour and a general convenience culture – perhaps simultaneously tapping into an increasing counter-trend averse to these very same notions.
Fouché is aware that the rigorous production systems to which he subjects his artworks are, like snapshots, another attempt at cropping reality into conveniently managed packages. These strategies inevitably fail at some point or expose an inherent weakness in their artificially imposed formulae. These quirks are accepted as part of the artwork’s reading – as the Greatmore viewer enamoured of the untidy threads discovered. Fouché adds: “It’s almost as if the works carry the scars of their forced creation.”
“I LIKE WORKING WITH TRADITIONALLY GENDER-BOUND MATERIAL,
AND STAKING MY OWN PLACE IN THAT… JUST TO MESS IT UP A BIT.”
His latest piece, conducted as part of the fringe event of CAPE 07, extended this engagement with snapshots to the realm of performance. He turned his Observatory studio space into an impromptu stage while mouthing the words to a string of angstridden songs about desire, love and loss – themes that recur in his work. According to the artist, pop songs function like snapshots but in a more visceral way. Much of his creative output seems a similar sort of emotional exorcism.
Fouché engages in part with issues of sexuality but does not want his work labelled for any specific audience: “I am really trying to question all kinds of categorisation … There is never an instance where labelling fits perfectly; there is always an individual that doesn’t fit and in a sense we are all those individuals.”
It is therefore apt that Fouché tends to favour mediums often associated with femininity; he is busy swotting up on crochet. “I like working with traditionally gender-bound material,” he says, “and staking my own place in that… just to mess it up a bit.” He adds: “Popular culture in the 90s had such a nice promise of ambiguity in that men were represented in much more feminised and genderreversed roles… But it seems we are returning to more hyper, more traditional, gender roles where men are expected to be ‘real’ men again, maybe as the result of a crisis in masculinity, instead of just embracing equality. It’s sad and scary to see even within the gay community how suddenly there is such internalised homophobia.”
By March, the artist was already having a busy year that included hanging a tapestry work at ABSA, participating in a Cape Town Festival group show and working on a private commission with sights set on a year-end exhibition 2008. He recently gave up tertiary teaching – at the College of Cape Town – to devote himself full-time to artmaking.
Kim Gurney is a Cape Town-based freelance writer and news editor Art South Africa. 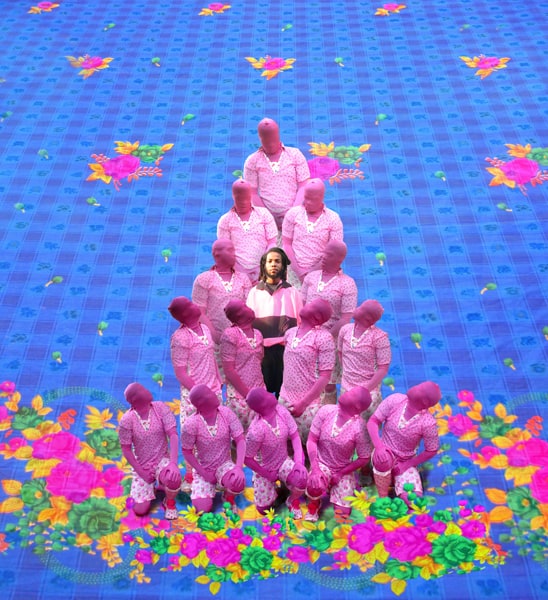 After my interview with Lawrence Lemaoana I had to look up a word I wasn’t sure about. “Rugby is really an enculturated sport,” he remarked in a vaguely northern suburbs accent – it turns out he went to high school in Highlands North. The web was possibly the wrong place to look for an answer, but then the dictionaries I had consulted weren’t exactly helpful: most entries for enculturation read, “see socialisation”. I eventually gave up when I ended up in a fundamentalist Christian website where God and Noam Chomsky where being quoted to explain how social norms are vested in young children. As it turned out, Lemaoana had been quite clear: “Rugby is like a religion.”
It is perhaps unusual that Lemaoana makes work about rugby. Unusual because here we have an articulate young black man interested in producing sly, ironic statements – using photomontage and sometimes decorated fabrics – to comment on your average whiteys preferred sport. “In the art world I face pressures to produce certain kinds of work,” he frankly counters. “Often I am asked to do watercolours, shacks and what not.” He squeezes out a sly laugh. “Then I present this.”
Issues of permissiveness aside, his interest in rugby is not entirely without autobiographical resonances. “I played provincial rugby for a while, for Highlands North, Soweto, and then at my highest point for the Gauteng Lions u/18 at Craven Week 2000,” he explains. “I played flank.”
Although slowly shedding its elitist (white) image, rugby is still marred by numerous problems as it lumbers into the non-racial present. Playing at a competitive level, it was unavoidable that Lemaoana found himself drawn into the realpolitik of the sport. Using his work Hierarchy of Colour (2006) as a reference point, he recalls a letter containing the names of players selected for the Lions. Some of the names were marked with an asterisk.
“It worked out to be all the black guys,” he clarifies. “At the bottom, the letter explained the quota of black players required. It made me question myself. If we are the players of colour what are the other guys? What are they called? What category do they fall into? At the time it wasn’t a sensitive issue, I just wanted to play, but when I started doing my art I questioned these issues.”
It is not just sport that informs Lemaoana’s practice. His exuberantly coloured photomontages and fabric works also take a sideswipe at South Africa’s exaggerated masculinity while expressing an interest in decoration and adornment. “Most of my work is layered,” he says of the photomontages. “You have perhaps four different layers that have been reduced.” Aside from photographing friends and landscape scenes in Mpumalanga, he also lifts images from the internet, botanical magazines and Shangaan fabrics. The outcome, in his photomontages, is “a fictional landscape, a dreamlike space, a constructed space”.
When I raise a point that his work might look vaguely kitsch, he simply smiles. Her points me to his work The Discussion (2005), a camp refashioning of Da Vinci’s mural The Last Supper. It won him the Absa L’Atelier’s Gerard Sekoto Award in 2005. “If you go to any home in Soweto, you will find the Da Vinci image.” Negotiating the “change of scenery between Soweto and the city” – an expansive statement latent with possibilities – he decided to revisit this image. The outcome recalls Yinka Shonibare filtered through the lens of a Catholic Tretchikoff. Somehow it works
Given his pointed commentary on rugby and its inelegant grappling with the issue of race, I ask him how it felt to win an art prize very consciously designed to address a quota imbalance in South African art. “Didn’t it make you feel like a player of colour?” I ask, using the title of his Alliance Française exhibition as a reference point.
“For me it was just another way of creating special categories,” he says. “It ties in with rugby so much. The standard line [in rugby] was that, ‘You have people that have been doing this for many years, generations and generations.’ Our argument was, ‘What about talent?’” I joke that maybe it is time black artists started entering competitions under the guise of being white – a refinement, if you will, of white artists doing the converse, Wayne Barker/Andrew Moletsi and, less charmingly, Beezy Bailey/Joyce Ntobe
“Maybe,” he chuckles. “You have to constantly negotiate your way.”

About Lawrence Lemaoana: Born in Johannesburg (1982), Lemaoana lived in Welkom before returning to Johannesburg to complete his schooling. A graduate of the Technikon of Witwatersrand, where he obtained a National Diploma in Fine Art (2003), he won the 2005 Absa L’Atelier Gerard Sekoto Award. Currently enrolled at the University of Johannesburg where he is currently completing further studies towards a degree, Lemaoana will present an exhibition of new work at ABSA Gallery in Johannesburg in June. A travelling exhibition organised by Alliance Française will be in Johannesburg (July 19 – August 9) and Pretoria (August 16 – September 6).

About Ruth Sacks: Port Elizabeth-born (1977) Sacks completed an Honours degree in Fine Art at the University of Cape Town (1999), where she is currently reading for a Masters of Fine Art degree at the Michaelis School of Fine Art. She has presented two solo shows at João Ferriera Gallery, When the Inside Stays Inside (2005) and Works in Wax and Plastic (2003). She has participated on numerous group shows, including GIMBERG/ NERF/ SACKS/ YOUNG (2007) at SMAC, Liste 06: The young art fair in Basel (2006) in Basel, and Check List (2007), part of 2007 Venice Biennale. She has been selected to participate on a three-month residency at the iaab International Exchange and Studio Programme, in Basel.