MY NAME IS LEGION


IN OCTOBER 2009, A GROUP OF YOUNG CAPETONIAN ARTISTS DECIDED TO BAND TOGETHER, PAINT THEMSELVES GREY AND TAKE TO THE STREETS FOR A SLEW OF SITE-SPECIFIC ENCOUNTERS. IN FEBRUARY 2010, THEY STRUCK AGAIN AT INFECTING THE CITY. BY GENNA GARDINI. 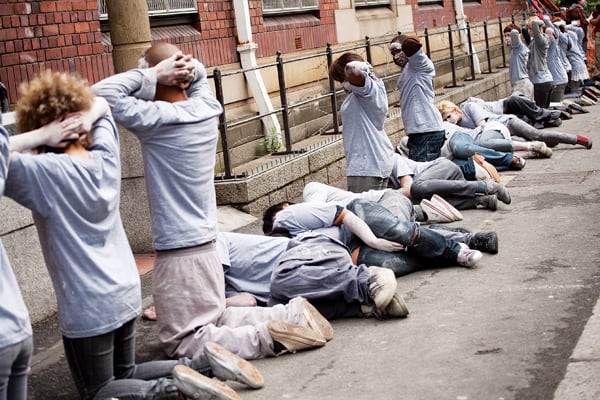 left – right Performers from the collective supplicate themselves before the entrance of Caledon Square Police Station on October 7, 2009. After a short
period, one by one, they lay down until the end of an allocated period. Photo: Niklas Zimmer; Performers created a cairn monument in silence using
contemporary building rubble illegally jettisoned by builders around District Six, Cape Town, February 17, 2010. 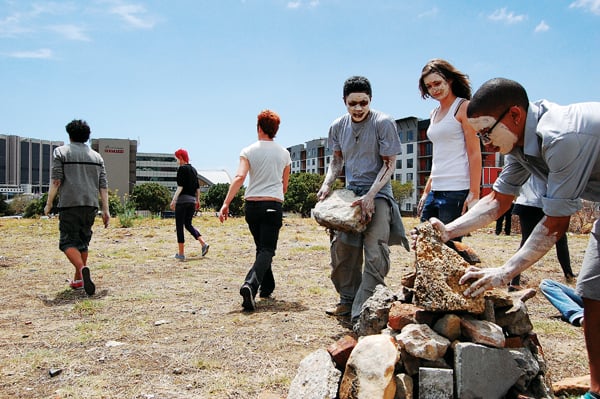 The first time I met with the secretive collective with no name they threatened to initiate me into it. After seeing photos of them stoically defying various City Bowl authorities while painted a chalkish grey, I was a little concerned. What exactly would it entail? I asked, trying to case the place for hidden clay slip. Fortunately, I couldn’t find any and the matter of my induction was not brought up again. The theme of initiation, however, came up repeatedly while talking to a small segment of the 29-strong unnamed collective (a tenuous estimation, since their numbers often change). This makes sense, as the members are mostly all third year Michaelis Art students and the collective itself was born out of a class project.

Asked, in 2009, to pair up and put on “impermanent and socially conscious” works at specific sites around the city, the students decided to veto working in twos and instead coagulated into a large, inclusive group. Anna Stielau, a member, explained the thinking behind this: “What realistic difference can two people really make to the space of Cape Town? If the point of pairing up was ostensibly to increase the impact of the final product, wouldn’t four people be better than two? At that, wouldn’t 29 be even more powerful?” The decision also tied in with their attempts to situate themselves as young artists “fighting against the pervasive emphasis on individual art practice bred in contemporary art circles”.

On the first day of the project, the group gathered outside the South African National Art Gallery and silently painted themselves grey. The colour was chosen to avoid any particular political connotations, while, interestingly, also functioning as a reference to the concrete nature of the city itself. Haroon Gunn-Salie, another member of the collective, explained that the group decided to remain speechless because of their belief that “young artists can’t be a megaphone for society”. They then embarked on a day-long march across the city, performing at some 16 sites. These locations included the Caledon Square Police Station, where one member tried to persuade the perplexed officers not to arrest them as the rest of the group knelt with their heads flung back, execution style.

THE VERY ACT OF CHOOSING ONE
PARTICULAR STRUGGLE EFFECTIVELY
EXCLUDES ALL OTHERS.

The collective also infamously attempted to stop the firing of the Noon Day Gun, arriving at Signal Hill and, much to the consternation of the lone security guard, laiying themselves prostrate before the cannon (checking that their earplugs were in place, first, though). They didn’t prevent it from going off, but they certainly caused a stir: after the firing, the group emerged from the smoke, unharmed but possibley greyer than before. Locals may also remember their guerrilla advertising campaigns, where the dates of the collective’s performances suddenly appeared on posters plastered throughout the city and the wall of Cape Town High School.

The public’s partly perplexed, partly intrigued reactions to these episodes landed the group their latest gig at Cape Town’s Infecting the City festival. As part of that programme, they performed more of their ephemeral, interactive encounters, eventually building a cairn monument of builder’s rubble and general rubbish in District Six. On the final day of the festival, the group gathered together, covered themselves in their signature colour, and climbed Table Mountain where they apparently encountered a pack of school kids on an excursion who demanded to be painted as well.

Ultimately, the collective, who are still operating without a name, are trying to make work that encourages a personal reaction. “South Africa presents a countless range of causes to champion, but the very act of choosing one particular struggle effectively excludes all others,” says Stielau. “Being silent and still in the bustle of the city sets one apart, but also encourages the public to invest in the piece by filling up that silence with words both spoken and unspoken.” For more on the collective see http://artheat.net/mixtape/2009/10/grey-matter.html.

Genna Gardini is a poet and writer based in Cape Town.

EXHIBITING WHERE WE CHOOSE 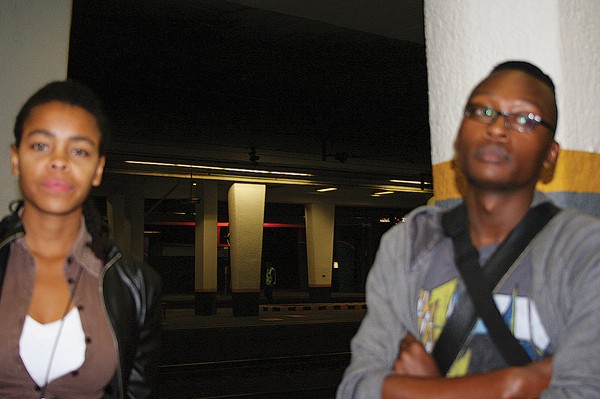 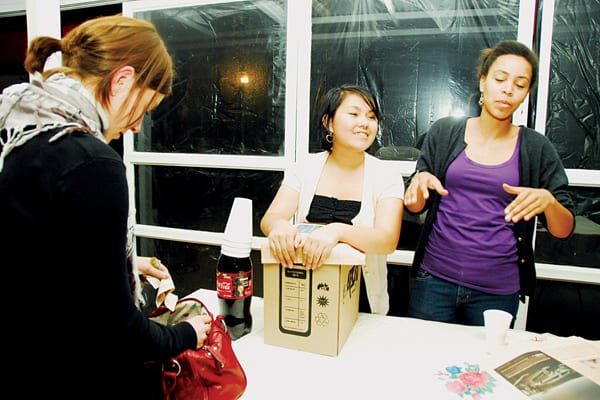 “We’ve formalised our collaboration,” Nare Mokgotho, 23, stiffly tells me from under his checked flat cap. Molemo Moiloa, 22, sits across the table. “You’re married?” I ask the two members of the art collective, Made You Look, surprised at the angle our interview seems to be taking. Moiloa, currently enrolled for a Master’s degree in Anthropology at Wits University, guffaws, ousting any pre-interview nerves.

“As the name suggests, it is about tongue-in-cheek interventions encouraging a re-observation of and de-familiarisation with the ordinary,” offer the pair on their blog. In their final degree year at
Wits University, Mokgotho and Moiloa masterminded Sermon on the Train, a series of academic lectures held on trains that drew on the urban tradition of religious sermons conducted impromptu on trains – people spend so much time commuting, they no longer go to church. Audiences have comprised students and unsuspecting commuters. To date, they’ve mounted three of these lectures: by African art specialist Anitra Nettleton, architecture academic Kirsten Doermann, and African literature professor, Isabel Hofmeyr.

The collective is about “making our work accessible and exhibiting it as we choose”. While this idea sounds marketable, these artists’ values aren’t about pollyannaisms. “How public are public lectures?” they ask in their work. They speak of the power in knowledge, the origins of knowledge and its real purpose.

THE COLLECTIVE IS ABOUT “MAKINGOUR WORK ACCESSIBLE ANDEXHIBITING IT AS WE CHOOSE”.

“The project is not about producing an ‘exciting’ event. It is an attempt to make connection with people outside the cocoon of the academy,” says Mokgotho, currently employed by the advertising agency J. Walter Thompson and a runner-up in the 2008 Sasol New Signatures Award. The public innocently become pawns to their project. Made You Look does not lack humanity in acknowledging the train-travelling public. While they acknowledge the provocative energy of trains, referring to Wits School of Arts staff member Bongani Khoza as a reference point – he filmed the religious sermons a few years ago in his art.

In collaboration with others, Mokgotho and Moiloa, a runner-up in the PPC Sculpture Awards before she shifted to an interventionist model in her art making and art thinking, have developed Gazart.

“Gazat is a loxion term for pitching in to buy spaaikos [street slang for food]. By adding an ‘r’, we’re creating a platform for young creatives to have freedom to create and express without gallery restrictions,” says Mokgotha.

They name Frances Goodman, a Wits sessional staff member, as an important influence.

“She asked the right questions,” says Moiloa, who initially wanted to go into managerial development in art to placate her parents’ desires. “But so did Anitra Nettleton and Jeremy Wafer and David Andrew… They all encouraged us to go beyond the usual. The department is fairly conservative. It was about an idea being enabled to have its own life. We’re fans of Guy Debord and the Situationists. Much of our thinking was stimulated by the ideas of Josef Beuys and his Open University. It’s about allowing information to circulate, in urbanity.”

Coming back to the notion of marriage.

“We didn’t join up to be a collective,” Mokgotho explains.

“It was because we enjoy similar interests,” grins Moiloa. “It’s easier not to do this kind of work alone. Media attention has focused on the idea that we are doing something great for society. We are, but not in the way that the mainstream press sees it. We are questioning the system itself.”

Robyn Sassen is arts editor for the SA Jewish Report and freelances for several print and online publications.