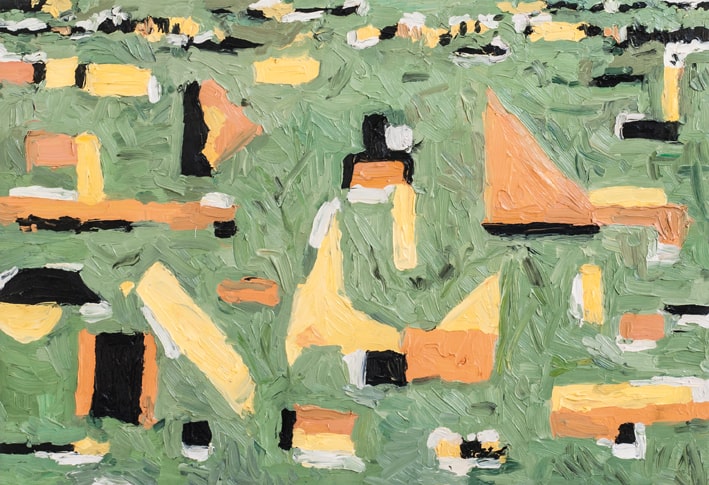 Within the current group of young, up and coming Cape Town painters (including artists such as Chris van Eeden, Kerry Chaloner, Matty Roodt, Alexandra Karakashian and Sepideh Mehraban1) Mia Chaplin is unique in the sense that her work has tended towards figurative representation over abstraction. Prolific in her production (as testified to by the artist’s Tumblr page2) Chapman is particularly adept at capturing the awkwardness, idiosyncrasies and insecurities of the subjects in her impressive portraits. On some level this must derive from her familiarity with these subjects and in fact many of the artists listed above have been depicted by her at one point or another. She has been able to carve a niche within the domain of paint/photography translation (well covered in South African art), maintaining distinction through the prominence of her dabbed brush strokes in lieu of Gerhard Richter-inspired blurring. ‘Ceremony’ is the artist’s first solo exhibition since graduating from Michaelis school of Fine Art in 2011.

Before continuing, I wish to emphasise that two things should be inferred from this review. The first is that I think that Chaplin is an exceptional painter. The second is that I don’t think that this particular showing of work was always successful in doing justice to this.

My reason for stating this partly lies in the often uncomfortable addition of abstraction in the exhibition. Given Chaplin’s penchant for prominent impasto brushwork, abstraction doesn’t seem an illogical choice; a brave one perhaps as it takes the artist out of her established comfort zone of portraiture and landscapes. The thing is that some of these just don’t work. The most obvious example is Strange Explanations (2014), curiously placed in the window outside of the gallery and thus functioning as the first thing which viewers see. The scattered arrangement of geometric ochre forms and thick black lines on muted chromium oxide green is indeed a very strange work; one that doesn’t quite feel resolved. In many ways it runs in the exact opposite direction to Chaplin’s prior output.

Now in no way am I trying to impose some sort of fascist demarcation of comfort zone (it is always better to have experimented than to play it safe), the point is just that some of Chaplin’s experiments don’t quite feel ready for their day in the sun just yet.

This is also not to say that this was uniformly the case. As an anecdote, I found myself being startled by Salon 91’s co-curator who (accurately) pointed out that I had been staring transfixed at Blue Slide (2014) for quite some time. Without a doubt, it is the strongest piece in the exhibition and is the kind of work that entices one’s mind to wander off into its murky gestural depths. It is a prime example both of Chaplin at her muted, melancholic best and of successful experimentation.

The dabbling with abstraction has also resulted in a much freer handling of the more figurative works than in the past. In this regard I am thinking of works such as Dinner (2014), High school (2014) and particularly The Farm II (2014); another strong contender for best work of the show. Chaplin’s style of painting apparently lends itself to depictions of water; paradoxically the choppy brush strokes adeptly convey the calm surface of the water.

Ultimately what the show lacks is an axis, some sort of framing device to hang it all together and bestow a sense of purpose. As it stands, it feels a bit uncertain of what it aims to achieve. This may be a straw man argument in a sense. If the sole intention of ‘Ceremony’ was to be “a solo exhibition of oil paintings”, as the subtitle suggests, then it has obviously achieved this end and it would be unfair to suggest that the exhibition implied any pretense to the contrary. In the absence of official gallery texts or artist statements, the “ceremony” to which the title refers becomes a floating signifier. Perhaps it refers to Chaplin’s acquiescence to a compulsion to paint without a specific intent beyond those means.

In this regard, it is Chaplins latent but obvious potential, clearly demonstrated in Blue Slide, Backdrop, The Farm II and Woman lounging (2014), that renders this approach slightly underwhelming. With a focussed lens, Chaplin could really produce a truly outstanding painting exhibition; this was not quite it yet. Nor, I suspect, was it intended to be.

1 What could perhaps be referred to as the “Paarden Eiland school” in honour of the studio locale of many of these artists.
2 See: http://miachaplin.tumblr.com/