“Art to me is an anecdote of the spirit, and the only means of making concrete the purpose of its varied quickness and stillness.” – Mark Rothko

There’s something incredibly captivating about Mathias Chirombo’s work. Standing up close to his large scale painting Death of the Mermaid III (2013), I am struck by an overwhelming sense of silence. This world – deep, pulsating, blue – stretches out around me, pulling me in. Spellbound, I take a step back, curious as to how I got here. Interestingly, it is the work and words of Mark Rothko that I am inclined to fall back on. 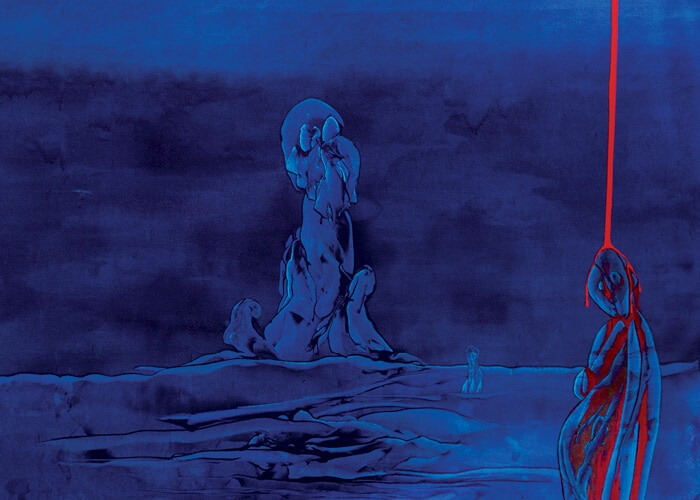 Mathias Chirombo, Death of the Mermaid III, 2013. Oil, mixed paintings and stitching on canvas, 240 x 150cm. All images courtesy of the artist.

“I paint large pictures because I want to create a state of intimacy,” Rothko said. “To paint a small picture is to place yourself outside the experience. Paint the larger picture and you are in it. It takes you with it. It isn’t something you control.” Rothko’s paintings, much like Chirombo’s work, were intended to be an experience. He wanted his viewers to immerse themselves, and in so doing, to illicit a sense of emotional and spiritual exhilaration. “The people who weep before my pictures are having the same religious experience I had when I painted them,” he told the writer and critic Selden Rodman at a chance meeting in 1956.

For Rothko, it was not so much the form that mattered as the experience in-and-of itself, for which the painting was simply a vessel. It is for this reason – and the more obvious rectangular compositions of his work – that so many writers refer to his paintings as doors, windows or even “the gates of heaven and hell.” As a Zimbabwean artist of Shona heritage, Mathias Chirombo’s paintings function in much the same way. “I wanted to share with everyone else what I could feel and see,” he explains. “The images are meant for people to experience a captured pause in an ongoing dream, like you are traveling through motionless time, a space of spirituality, a space which the body cannot travel.” 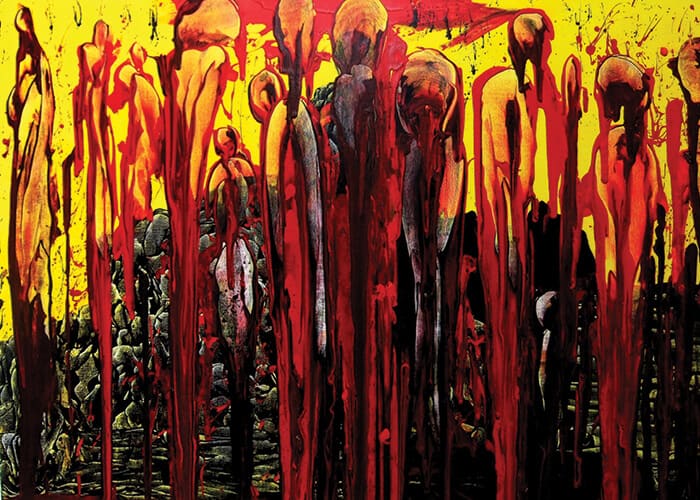 In Shona culture it is believed that when a person dies, their spirit continues to live on in a separate but parallel world. “In this world the deceased, our ancestors, are ever-present,” he tells me. “They provide care and protection for their living families, who can consult with them for guidance and support.” In this sense, the act of painting serves as a medium through which the artist engages his own spirituality, transforming the canvas into an active, transcendental site. Once complete, the canvas becomes a repository that can be returned to again and again, like a meditative time capsule. And it is here that Chirombo’s work takes on a life of its own.

For Rothko, “the exhilarated tragic experience” was the only source of art. He wanted people to feel what he felt at the time of the painting. Emotion itself being the spiritual experience. This is reflected in Rothko’s minimalist aesthetic considerations – large, flat blocks of colour that speak to the formless, internal obscurity of the heart. Whilst transcendental in its own right, Rothko’s world is isolated to the realm of the individual. Just google ‘Mark Rothko Exhibition.’ What you’ll find is an assortment of images of people standing on their own, or sitting in quiet contemplation on a bench beneath a work. 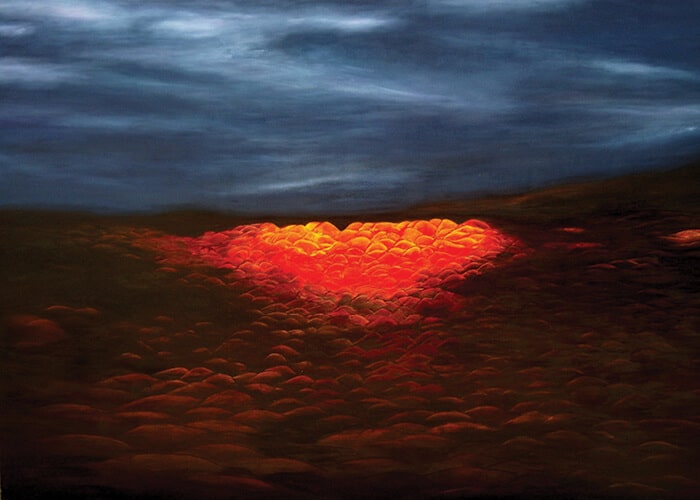 Chirombo’s practice, on the other hand, lives somewhere between the viewer and the work. Born from a philosophy of co-habitation – between the living, the dead, animals, land and all other aspects of nature – Chirombo’s canvases are littered with familiar fragments and distorted, dreamlike variations of the external world. You want to explore it, to make sense of it. In this way, his work draws you in, inviting you to wonder, and to get lost.

In Death of the Mermaid III we’re lured in, not only by the scale of the piece, but by Chirombo’s masterly articulation of composition. Pulled along a current of colour and contour, your eye is guided to a central, monolithic ‘castle-in-the-sky’ that sits on the horizon line, and then to the right, where a foregrounded form (no doubt the mermaid) peers back at you. The mermaid, a notorious temptress the world over, stands to the side like a gatekeeper addressing the viewer. Held at a slight angle, her head gestures back toward the monolithic structure at the centre of the image. The viewer, however, is held by her gaze, trapped like a deer in the headlights in a roundabout triangle between yourself, the ‘castle-in-the-sky’ and the mermaid. In addition to this is the thin baptismal run of red that falls from the top of the canvas onto the mermaid, and it is here that we become conscious of the punchline. It is the only line in the entire image (apart from the mermaid’s gaze) that alludes to an alternate world beyond the canvas, a world that you as the viewer are inextricably linked. 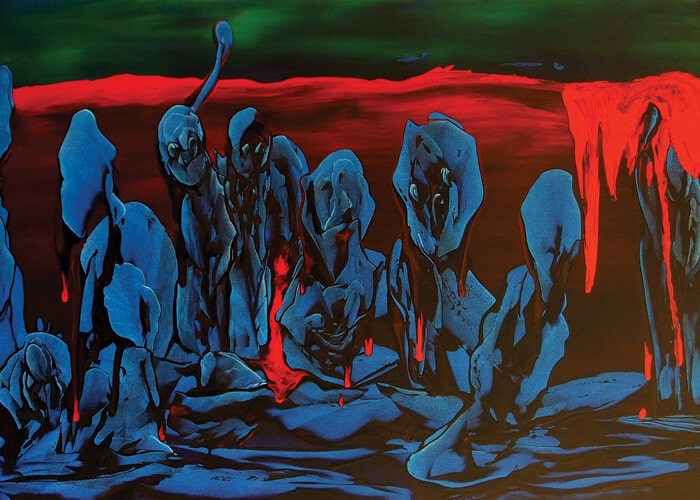 Mathias Chirombo, Now that we are here, what would you like to ask?, 2013. Printmaking ink, emulsion, fabric paint, liquin, linseed oil and oil on canvas. 160 x 100cm.

Chirombo’s work is constantly shifting the parameters of this boundary. Where one might be drawn into the large, spacious world of Death of the Mermaid III, other more compact works, such as Now that we are here, what would you like to ask? (2013) offer up a multitude of weird and wonderful biomorphic incarnations. These forms protrude out of the landscape like ancient eels from a reef, barely distinguishable from one another. In addition to this is the strange sense of urgency created by the landscape: a tide of volcanic, blood red sludge that threatens to engulf everything in its path. Similarly, in a work titled Sacred Spaces, a rocky landscape rolls out beneath a thunderous sky. At the centre of the image a circular cluster of rocks glow like coals. The effect is somewhat frightening, yet unavoidably compelling. As if whatever lurks within these incomprehensible spaces is about to come crashing into our own reality.

Mathias Chirombo’s work will be on exhibition at the National Arts Festival 2016 in Grahamstown, South Africa.