in News Articles 2013
Share on facebook
Share on twitter
Share on email
Share on whatsapp
“We have become our own extra-terrestrials.” The apt assertion that we have ‘othered’ the self is taken from UCT Anthropology lecturer Professor Lesley Green’s conclusive talk at the opening of ‘Karoo Disclosure’ this past weekend. Held at the Iziko South African Museum in Cape Town, the exhibition is a collaborative effort initiated by Deborah Weber to fuel discussion around the potential effects of fracking and our relationship to the world in which we are accommodated. 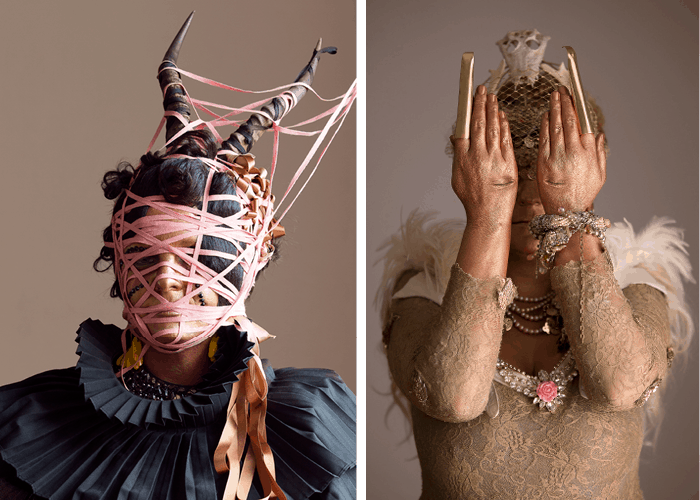 Photographer: Margaret Stone, Performer: Deborah Weber, Costume and Stylist: Gina Waldman, Jewelry Design: Michelle Liao, Installation: Elgin Rust. Image Courtesy of the Karoo Disclosure Collective
“The world is made in relationships,”said Green, “it is important to not take as given a particular version of nature.”Chaired by Andrew Lamprecht, this exchange took the form of a panel discussion and included, in addition to Professor Green, guest speakers Virginia MacKenny (Associate Professor in Painting at the Michaelis School of Fine Art at UCT), Dr. Roger Smith (Curator of Karoo Palaeontology at Iziko) and Saliem Fakier (World Wildlife Fund energy expert). Paralleling the various themes inherent in the exhibition, these talks formed an attempt to contextualise our multiple layers of understanding; to create osmosis between the various economies of knowledge that allow one to engage the landscape not as something separate to, but very much a part of our lives.
Suitably situated above the World of Water at Iziko the exhibition explores notions of heritage, culture, ownership and legitimacy in the context of external economic and political drivers. Deposited in relative proximity to one another, the objects on display (many of which were provided by the Iziko Natural History Collections) are played out against one another – entomological studies, a meticulously hollowed out ostrich egg, pink ribbon, beaded terrapin shells, a pair of stained satin gloves, a hand drawn map of Melton Wold, the koppie, the guest house, the pond, an elaborate magnifying glass. These seemingly elusive connections are made palpable by a video installation that forms the core for further excavation. Set on the Doornberg Guest Farm in Nieu Bethesda, two dual narratives play out in whimsical, partial exploration; like two Carabossque fairy god mothers caught between a rock and a non-place, conscious yet callous of the latent energy they’re so eager to conjure.
Artists involved in the making of ‘Karoo Disclosure’ include:
Deborah Weber (initiator, performer, producer)
Damien Schuman (Videographer, Director, Editor)
Elgin Rust (Installation artist, film co-ordinator)
Gina Waldman (Stylist costume designer)
Lisa Bauer (Music performer, instrumentalist, vocalist)
Margaret Store (Photographer, edu-co-ordinator)
Maxim Starcke (Sound composer)
Michelle Liao (Jewellery designer)
Paula Kingwill (drama couch)
Pete Van Heerden (Sculpture, farm owner)
Stuart Rothgiesser (researcher, copywriter)
Tom Glenn: Video colourist
Hendrick Dudumashe (welder)
The exhibition runs until 15th November 2015.
For more information visit http://www.iziko.org.za/news/entry/issues-of-fracking-disclosed-at-iziko