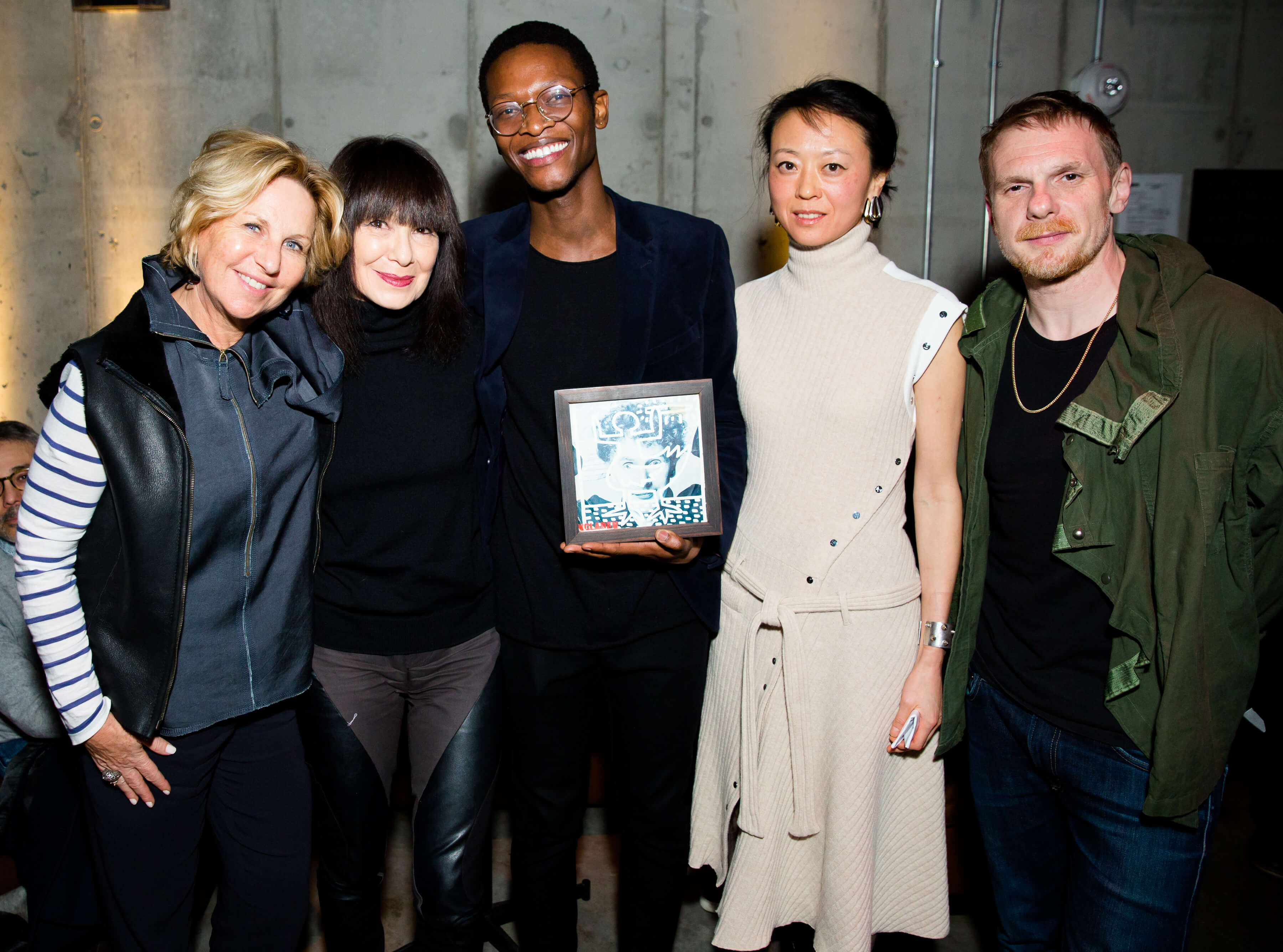 Performa is pleased to announce the winner of the fourth edition of the Malcolm McLaren Award, Kemang Wa Lehulere, presented last night at the Performa 17 Grand Finale and conclusion of the Performa 17 Biennial hosted by PUBLIC Arts. Following the spirit of McLaren, a champion of the young and bold, the prize is awarded during each Performa biennial to a visual artist who demonstrates the strong potential of the territory of live performance through an innovative and thought-provoking performance during the biennial. The award was presented by critic and curator, Carlo McCormick, and accepted by South African vocalist, Vuyo Sotashe, on the artist’s behalf.

“Performance is the non-commodity that so well expresses our collective resistance. Malcolm McLaren appreciated a great sense of folly in his work and never shied away from the possibilities of utter failure,” comments Carlo McCormick, presenter of the 2017 McLaren award.

“Performa 17 has been an utterly exhilarating biennial. Every work has been a powerful call to activism through the most visually dazzling means, showing us how artists use their extraordinary talent as probes to consciousness. We are all better human beings for the work that we have experienced. I extend my profound and heartfelt appreciation to each and every artist, and to my entire team for joining the artists in realizing their ideas. Each performance has been a work of wonder, and it’s impossible to single out one for a prize, but we do so in the name of Malcolm McLaren, to remember his incredible spirit, to honor him, and to inspire us all anew with his words and imagination,” comments RoseLee Goldberg, founder and chief curator of Performa.

Performa 17 brought three weeks of live performance to New York City, a culmination of two years of in-depth art historical research with six programs: South African and Estonian Pavilion Without Walls, AFROGLOSSIA, Circulations, AFTERHOURS, and Dada’s 100 year legacy. Through major commissions and projects, the Biennial’s participating artists confronted today’s most pressing social issues, the multiplicity of African identities, how performance and movement is shaped by the built environment and vice versa, and how the groundbreaking principles of Dada remain salient in the subversive consciousness of contemporary artists. Featuring artists from across the world, from Kenya to Canada, highlights from the seventh edition ranged from Julie Mehretu and Jason Moran’s reverberating collaboration, to Zanele Muholi’s citywide exhibition of her powerful portraits, continuing Performa’s mission to encourage artists across disciplines to pursue projects in the “live” sphere. 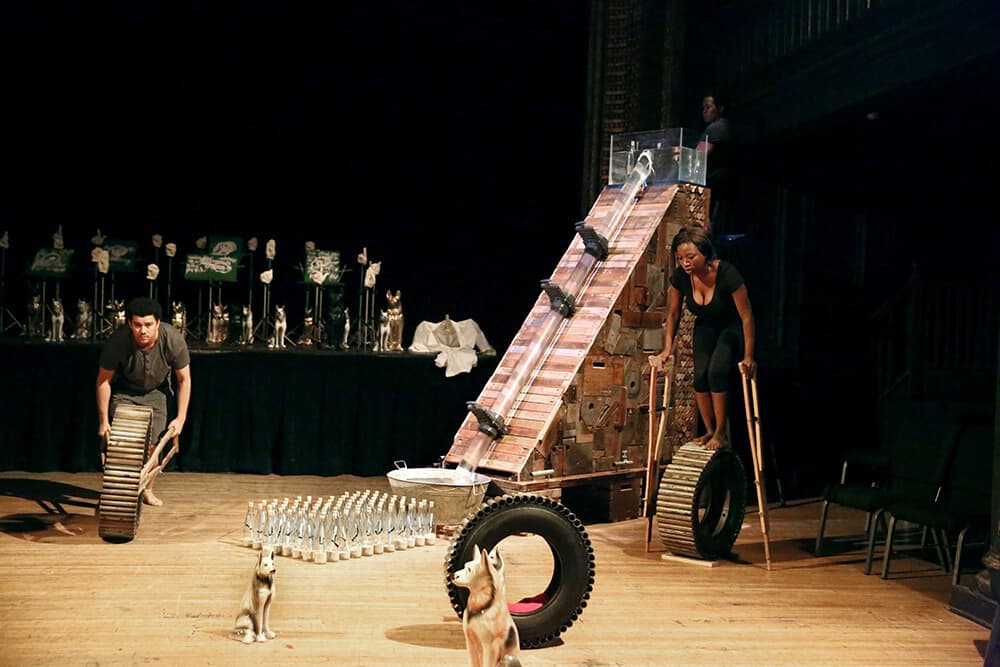 Kemang Wa Lehulere, I cut my skin to liberate the splinter, 2017. Photo credit: Paula Court. Courtesy of the photographer & Performa 17.

The award was given to Cape Town artist Kemang Wa Lehulere for his commission I cut my skin to liberate the splinter, where the artist created a new set of machines and sculptural instruments for his collaborators to play, working with theater director Chuma Sopotela to conduct actions and movements borrowed from children’s games. The artist also composed an accompanying sound work that was galvanized by ‘Cosmic Africa,’ the 2003 documentary about Thebe Medupe, an astrophysicist who traveled throughout the continent and shared knowledge about the universe, ancient artwork in Namibia and Egypt, and myths with villagers along the way. Wa Lehulere’s Commission bridges these planes of knowledge with constellations drawn from indigenous astrology, tribal wisdom, and religious rites.

In selecting the winner for this year’s Malcolm McLaren award, Performa enlisted a diverse jury, including artists, writers, and curators, who have attended performances throughout the biennial to nominate a winner, acknowledging the far-reaching potential of Wa Lehulere’s commission.

Kemang Wa Lehulere, I cut my skin to liberate the splinter, 2017. Photo credit: Paula Court. Courtesy of the photographer & Performa 17.

ABOUT THE MALCOLM MCLAREN AWARD:

In 2009, Performa and McLaren planned to produce a collaborative live performance lecture as a highlight of the Performa 09 biennial, plans sadly cut short by a tragic loss. Young Kim, heir to the estate of Malcolm McLaren, and curator Mark Beasley organized this award to celebrate McLaren’s tremendous spirit and legacy of innovation. The inaugural award for Performa 11 (November 1–21, 2011) was presented by writer Greil Marcus and musician Lou Reed during the Performa Grand Finale at the Bowery Hotel.

Malcolm McLaren (English, b. 1946 London, England; d. Switzerland, 2010) was a visionary of pop culture. An artist in the most post-modern sense of the word, McLaren was always at the forefront of movements. Starting as a young student in London including Goldsmiths Art College and St. Martin’s, he studied drawing and painting before experimenting in radical, politicized artworks inspired by the Internationale Situationniste, the most famous of which was Punk. Throughout his life, McLaren was known and celebrated as legendary shop conceptualist (Let It Rock, Too Fast To Live Too Young to Die, Sex, Seditionaries, World’s End and Nostalgia of Mud), his 12-year design partnership with Vivienne Westwood, pop music group creator and manager (Sex Pistols, Bow Wow Wow), singer/composer (Duck Rock, Fans, Waltz Darling, Paris), lecturer, performer, producer, filmmaker, director, philosopher, politician (running for Mayor of London in 1999) and of course his art films, Shallow 1-21 and Paris, Capital of the XXIst Century – all diverse expressions of his artistic spirit.

Carlo McCormick is a pop culture critic, curator and Senior Editor of Paper magazine. His numerous books, monographs and catalogs include Beautiful Losers: Contemporary Art and Street Culture, The Downtown Book: The New York Art Scene 1974-1984, and Dondi White: Style Master General. His work has appeared in Art in America, Art News, Artforum and many other publications.

Founded in 2004 by art historian and curator RoseLee Goldberg, Performa is the leading organization dedicated to exploring the critical role of live performance in the history of twentieth-century art and encouraging new directions in performance for the twenty-first century. Since launching New York’s first performance biennial, Performa 05, in 2005, the organization has solidified its identity as a commissioning and producing entity. As a “museum without walls,” Performa provides important art historical heft to the field by showing the development of live art in all its forms from many different cultural perspectives reaching back to the Renaissance. The Performa Biennial is celebrated world-wide as the first biennial to give specialized attention to this remarkable history, transforming the city of New York into the ‘world capital of artists’ performance’ every other November. Performa attracts a national and international audience of more than 240,000 and receives more than 5,000,000 website hits during its three week run. In the last decade, Performa has presented nearly 600 performances, worked with more than 700 artists, and toured commissioned performances in nearly 20 countries around the world.

The Performa curatorial team is led by Founding Director and Chief Curator RoseLee Goldberg, and includes Performa Curators Adrienne Edwards and Charles Aubin, with contributions from Performa Consortium curators. The Performa program is produced by Esa Nickle and Maaike Gouwenberg.

Major Support provided by the Ford Foundation, The Andy Warhol Foundation for the Visual Arts, Toby Devan Lewis, The National Endowment for the Arts, and the Performa Commissioning Council.