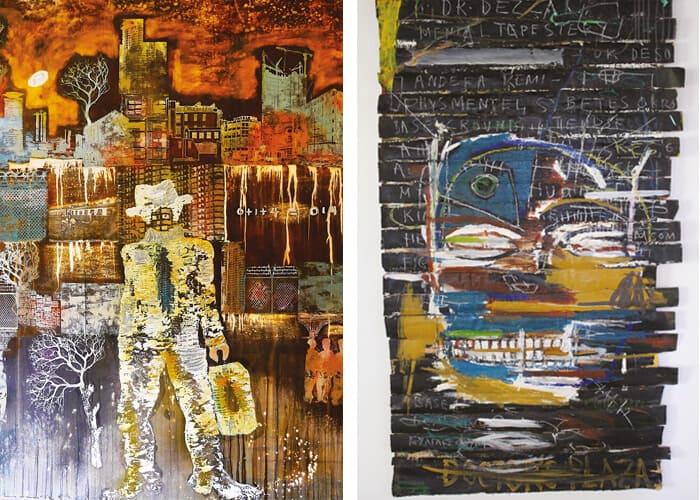 Possibly the best evidence of the vitality and vibrancy of the contemporary Kenyan art scene is the fact that so many of the country’s best and brightest artists are crossing borders and increasingly exhibiting both within the region and overseas – a run off effect of the bourgeoning local art scene.

In South Africa alone, Peter Ngugi and Ehoodi Kichapi, two of the leading Kenyan artists are currently having solo exhibitions at Nini Gallery’s respective spaces in Cape Town. A number of other Kenyans – Dennis Muraguri, Jackie Karuti, Ato Malinda, and Paul Onditi – also had their art on show at this year’s FNB JoburgArtFair, and at least one Kenyan sculptor, Cyrus Kabiru – with his C-Stunner eye-ware art – is being represented by SMAC Gallery.

Largely determined by the Western gaze, Kenyan contemporary art is still not widely recognised on the global art scene. Not long ago, scholars who studied African art had little to say on the subject, apart from taking note that local venders still sell wooden figurines to tourists which these pundits called ‘airport’ or ‘souvenir’ art. Historically, it was West Africa that was most widely acknowledged as the home of authentic ‘African’ art. After all, it was Westerners like Picasso and Matisse who’d confirmed that something incredible was happening on the Western side of the continent. Independent South Africa was said to be coming up fast, but in the East, little was understood to be happening at all. These stereotypes still persist today, although the situation in East Africa, particularly in Kenya, is changing rapidly. Still, few people in the media (scholars aside) have had time (or inclination) to engage this development. 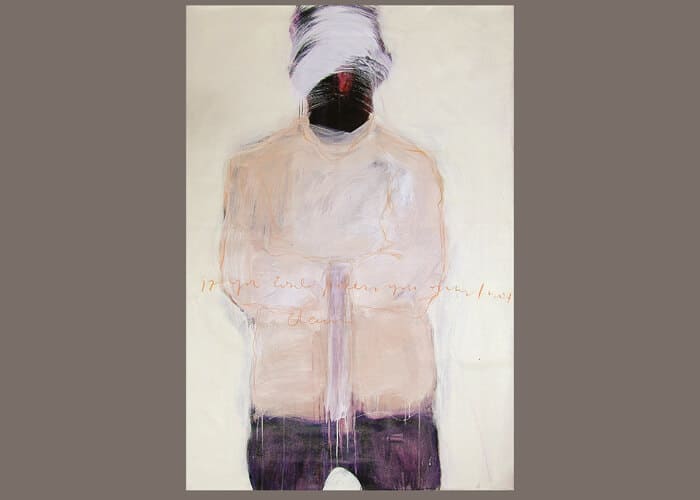 Recently, Financial Times ran a story about Paul Onditi, who’s one among several Kenyan artists to have showcased their work either in New York or London. Names like Peterson Kamwathi, Beatrice Wanjiku and Michael Soi are increasingly coming into wider conversations about what’s percolating in Kenyan contemporary art, yet not even Financial Times picked up on the fact that Kenyan artists are also exhibiting in Yokohama, Barcelona, Paris, Luanda, and Cape Town. Despite the increased exposure of artists internationally, these artists represent the tip of the iceberg, and are indicative of the rapidly expanding interest in artist production locally.
To meet the demand for spaces where artists can showcase (and ideally sell) their artwork in Kenya, new galleries and art centers have been opening up practically every other week. The latest one is the Polka Dot Gallery which opened in late September, with a generous mix of both indigenous Kenyan and Kenya-based expatriate art. Before that The Art Space opened, preceded by the Fundii Art Centre, Shifteye Gallery, and The Little Gallery, amongst others.
Despite the increasing number of spaces available, Kenya’s up-and-coming artists are increasingly finding spaces outside of the conventional galleries to exhibit their art by reaching out to luxury hotels, up-market restaurants, coffee houses, and shopping malls. Maryanne Muthoni is currently covering the main entrance of Two Rivers Mall with hundreds of meters of mosaic tile murals. The Garden City Mall is home to Maggie Otieno and Peterson Kamwathi’s award-winning sculptures, which stand tall at the entrance. Peter Ngugi is about to install his five meter metallic Coffee Tree at The Hub, an affluent Mall in the suburb of Karen, Nairobi. The slightly older art galleries like One Off, Circle Art, Red Hill and Banana Hill art galleries are all keeping busy with exhibitions running regularly every month. The same is true for the foreign art centers like the Alliance Francaise, Goethe Institute and Italian Institute of Culture, all of which are sought after sites that typically have a lot of traffic from the CBD. Even the Russian Embassy periodically mount exhibitions of Kenyan art. Unfortunately,  however, the visual art scene in Kenya has had virtually no support from government, an attitude towards the arts best illustrated by history: 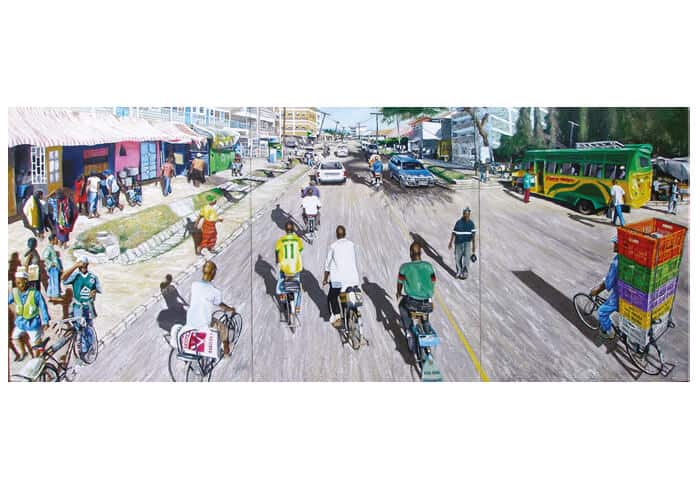 In 1963, at the dawn of Kenya’s Independence, the first Minister of Foreign Affairs, the late Joseph Murumbi (who subsequently became Vice President), proposed that a National Art Gallery be established. It wasn’t, and almost two decades later, the retired Joseph Murumbi sold his mansion and his priceless Pan- African art collection ‘for a song’ to the Kenya government on condition that they secure the collection and establish a Joseph Murumbi Institute of African Art at his former home. The Institute was meant to be the next best thing to a National Art Gallery, doubling as a research centre where scholars could come from all over the world to learn about contemporary and traditional African art. Not long after the completion of the sale, relatives of the then Kenyan president, Daniel arap Moi, ransacked the collection, demolishing the Murumbi mansion. According to Alan Donovan, Murumbi’s business partner and co-founder of the African Heritage Pan African Gallery, they tore the house down with the plan to put up high-rise flats. Today, the Kenya government has yet to see the value of the visual arts. A few politicians and billionaire businessmen have begun to collect Kenyan art, however, more often than not, they do so after hearing how local artists are starting to make big money for the sale of their work. So those few are starting to see the investment potential of purchasing works by local artists.
Although nothing has been done to resurrect Murumbi’s hope of a National Art Gallery, the Nairobi National Museum – originally a natural history museum – now has a thriving ‘Creativity Gallery’ where a multitude of newcomers are provided exhibition space. This support for up-and-coming artists is further enhanced by an annual ‘affordable art’ show, where artists are compelled to undervalue their art, but the trade-off is that the artwork sells. What we’re seeing is that artists are no longer holding their breath, hoping for support, and that gradually, local people are visiting the galleries, attending exhibition openings and even buying work. 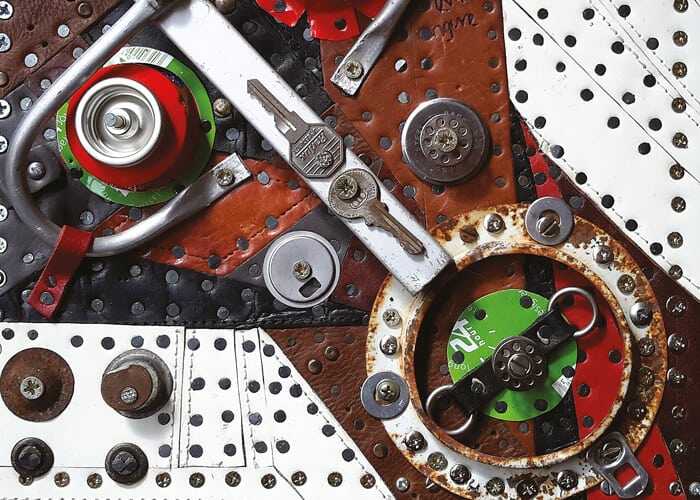 One of the most positive signs is the emergence of artists’ ‘incubators,’ where aspiring artists come to work within communal spaces where they are exposed and even mentored by the more established artists working there. That trend began many years ago when Kenya’s first indigenous African art center, Paa ya Paa was established in the mid-1960s. Since then, spaces like Kuona Trust and The GoDown art centre have communal studio spaces where young and older artists work side by side. The latest artists’ collective is Maasai Mbili, which operates out of one Kenya’s biggest slums in Kibera, the Dust Depo. Here artists work alongside one of the country’s leading artists, Patrick Mukabi and Brush tu Art, a group of five practicing artists who have opened their studio to share their passion as well as their painterly practices with newcomers.
All of these developments are contributing to the burgeoning Kenyan art scene. But perhaps the one Kenyan phenomenon that’s captured lots of local and international attention is the East African Art Auction, launched by Circle Art Gallery, which plays a central role in pushing up the value of Kenyan and other East African artists’ work. That being said, there’s no single factor that’s played the most transformative role in making the Kenyan art scene as vibrant as it is today. It’s the convergence of all these factors that has caused the qualitative shift from ‘souvenir art’ to what’s emerging and energising art in Kenya today.
Margaretta wa Gacheru (nee Swigert) is the arts correspondent for the Nation Media Group in Nairobi, Kenya. She has a PhD is contemporary Kenyan art and has been writing about the visual and performing arts in East Africa for several decades. She’s originally from Chicago, USA.