Understanding the independent relationship between human and machine

The advent of technology is inescapable. In recent years, a new humanoid has been unveiled every few months, and artificial intelligences appear to be getting more sophisticated by the day. There is a drive to create something that looks, feels and acts more human. However, to what end is this pursuit running? Why are humanoids created to resemble our likeness? Does their appearance help to facilitate their designed purpose? It is suggested artificial intelligences hosted in human form will ease the human experience in all aspects of life. In business and the domestic these embodied AI’s are poised to alleviate our stresses and liberate our lives. However, the recent parading of gynoids (female humanoids), like Sophia Robot, has already seemed to challenge this utopic vision. 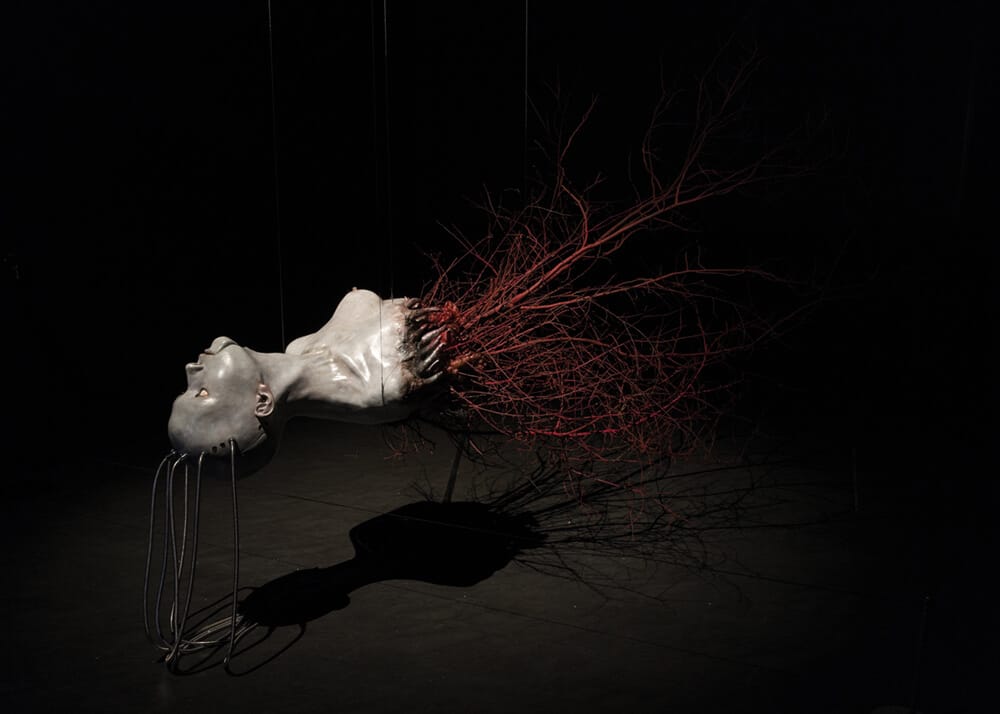 Sophia, perhaps the most popular gynoid of recent times, is, among other reasons, designed to serve as caregiver to the elderly and assistant to the public. Her advanced artificial intelligence allows her to respond to conversation while her face is able to react and display a range of emotions. Fashioned after the actress Audrey Hepburn, her feminine exterior and proposed situation in relation to others carries and entrenches the sexist notion that women are designed to serve. In October 2017, Sophia was granted citizenship to Saudi Arabia – a controversial decision in the eyes of many. This act has placed her in an elevated position over immigrants who have to follow the lengthy, difficult and uncertain processes of citizenship. Sophia as a female bodied figure also defies feminine custom as she does not require a male chaperone nor does she have to wear a hijab. Inadvertently, her presence brings about social issues concerning faith and the gendered distribution of power in society. Clearly there are people, especially those most vulnerable in society, to which she causes unrest rather than her proposed beneficial purpose.

The more humanlike robots become an onlookers response to them may be more positive however, at some point this trend reverses with the viewer experiencing distress due the lifelike nature of the robot.

Though the increasing interdependent relationship between human and machine may vex some, it is a trend that is unavoidable, and one that has fundamentally altered the way humans conceive of themselves.  Some, like cyborg feminist, Donna Haraway, in her ‘Cyborg Manifesto’, go as far as to say that humans themselves have become chimera-like “hybrids of machine and organism”.  One can merely look at our dependent relationships on smart phones, computers and social media to find testament to this claim.  As science and technology progresses, and the understanding of the human body furthers, we can think of the body in more abstracted, mechanical ways – as various mechanisms and processes that keep us alive. When it is needed or wanted, we can artificially supplant or advance these processes to further ourselves. Increasingly we are becoming more mechanised and simultaneously the humanoid is becoming more organic in appearance and programming, thus blurring the line between man and machine.  The collapsing of boundaries begs the question, “What is it that makes us human”?

This tenuous boundary serves as highly fertile terrain for creative engagement. It is a subject taken up by many and is displayed over a range of genres.  In particular the work of South Korean mixed media artist Jinah Roh comes to mind. Her sculptures Geppetto’s Dream and An Evolving Gaia stage this relationship in a unique and interactive environment.

Geppetto’s Dream is a decidedly evocative work of art. Sprawled in a chair the viewer finds a cast nude, female figure. She appears lifelike apart from her flayed limbs that resemble wooden doll parts. Sitting with her head downturned, she is stationary. However, her mechanised eyes dart around the room seemingly staring at the viewer. A few feet away, a keyboard and monitor is found. When a question is fed into the system, the figure answers in a nondescript robotic voice – the only sound heard in the exhibition space. It is a jarring experience to say the least, one that feels almost uncanny. This strange emotional response is not unique to Geppetto’s Dream, rather it is a theme explored in many of her artworks. It is a clear example of the phenomenon commonly known as ‘the uncanny valley’.

Japanese roboticist, Masahiro Mori observed that the more humanlike robots become, an onlooker’s response to them may be more positive. However, at some point this trend reverses with the viewer experiencing distress due to the lifelike nature of the robot. The slightest awkward gestures or any behavior that upsets the verisimilitude of the figure, repulses the viewer. The less humanlike the robot appears – the viewer again experiences the robot in a more positive light. This period of unrest, is referred to as ‘the uncanny valley’. Mori first forwarded this hypothesis in 1970 in an article published in Energy and was later translated in 1978 as ‘the uncanny valley’ in Robots: Fact, Fiction and Prediction, written by Jasia Reichard. The hypothesis led Mori to suggest that roboticists should refrain from creating figures that look and move in an overly lifelike fashion, fearing that the uncanny valley may disrupt that which is needed for successful human-robot interaction. However, despite these sentiments, roboticists are creating ever more lifelike figures – some even as doppelgängers of real people.

Why are humans created to resemble our likeness? Does their appearance help to facilitate their designed purpose?

Roh’s sculptures are deliberately staged to stir an uncanniness in the viewer, perhaps serving as a reminder of the possible unrest humanoid figures may evoke in people. Like in Geppetto’s Dream, An Evolving Gaia similarly features a nude female figure this time facing upward. As the viewer approaches her, her eyes follow. Again there is an interactive element to the artwork, in that viewers are invited to ask her questions to which she responds.  A peculiar detail of this artwork is the metallic looking rods flowing out of her head and the network of roots that seem to burst from her body. Immediately these features conjure up the duality of the organic and inorganic, human and machine and is echoed in the title of the artwork. The title refers to the ‘Gaia theory’, the notion that the world is an organism made up of various self-regulating processes, a synergistic system wherein all living organisms and inorganic materials interact so as to maintain the conditions of life on earth. Roh suggests that the concept of Gaia is changing with the rapid advance and dependence on technology. Increasing interactions between machines and humans result in an ever-changing Gaia, one characterised by an integration and reliance on technology.  However, Roh perhaps sees this advance as somewhat worrying, An Evolving Gaia’s uncanny nature stages these changes in a questionable if not abhorrent fashion. Roh’s artworks signal that the current and coming changes are not and should not be free from critique. 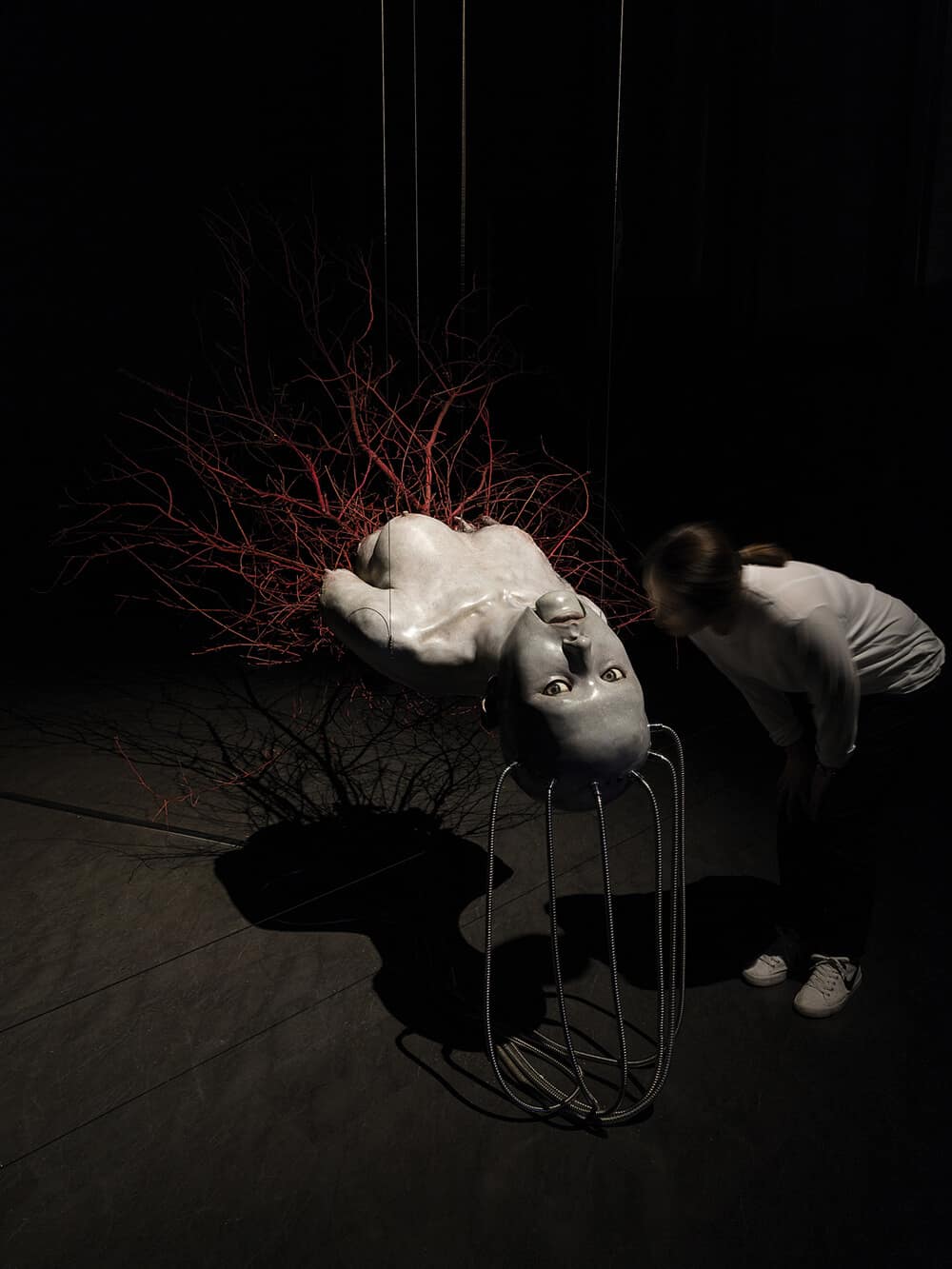 Art has always served the purpose to question and challenge the status quo. It twists and turns concepts to form reimagined and unique perspectives. Technological progress has certainly, irrevocably changed our living experiences. Therefore, it is of the utmost importance to continually engage with the changing technological landscape. Artistic renderings help to facilitate this process. Technology is exciting and always will be. I am not suggesting that the future of advanced AI and robotics is something to be feared, rather like Roh, I would like to emphasise the need to take cognisance of these changes, to try to look upon them from many angles, to attempt to understand the further influence they may have. It is better to be open eyed to the possibilities rather than to blindly accept or refuse the path that has been paved.

Stephan Basson is an English Studies Honours graduate from the University of Stellenbosch. His research interests include: posthumanism, gender studies, queer studies and life writing.