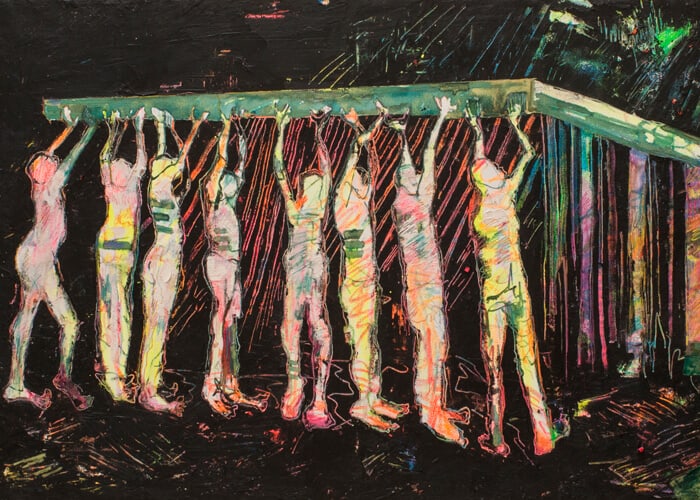 ART AFRICA: In ‘limp’, you address what you describe as the “impotency of whiteness” in current South Africa. Is there a particular crowd that this work is aimed at, and could you please explain your thoughts surrounding this specific term?

Elize Vossgatter: It is a complex term and one that can be easily misread in its brazenness. It is important to note that I am not trying to speak for any community; rather that I am talking from my perspective at a community of people much like myself: middle-class, economically advantaged, culturally confused and well-educated. I am not a social commentator. I am an an observer- my paintings reflect the moods around me and I respond intuitively.

I am 36. I entered highschool at age 12 in 1994. I went to a private girls only boarding school which was mostly white. I remember the 5% of black girls celebrating the announcement of the election in ‘94 and being aware that I had no idea what was being celebrated. Despite this we were thrust forward as the ‘rainbow generation’ and thus we never had to fight for or against anything. Our older generation fought, and now as I watch, with admiration, the younger generation fight, I am once again aware of how limited my empathy and understanding is- and I see this reflected in my peers of my generation who are now in noteworthy positions of where their voices could matter- but they feel frozen and unable to speak and remain quiet and often apathetic. I am questioning whether this is due to collective shame? Due to unworthiness? Or due to fear?

I am aware that the structures of white economic power are definitely not impotent and that economic transformation has not yet happened in South Africa as it should have and this is what makes my comment unbearable to many.
Our country is angry – and it is an unfortunate reality that our collective anger needs to be defined by our positions of race and class.

My work is questioning what it is we, as white, previously advantaged citizens are able to do in order for this transformation to happen. It is not enough to wear black. It is not enough to remain quiet either. I am trying to open a conversation which needs to happen. Are we allowed to have a voice? Are we African? Are we part of transformation? Are we still protagonists? How do we listen? How do we change? How do we help? These issues have not been properly addressed and thus, I feel that the community around me, myself included, have become numb to it and limp… waiting, suspended… while the younger generation blames and shames.

I think it is important to point out the bitter irony intended with the phrase ‘previously advantaged’. This term is as preposterous as it is true, (as is the opposite, ‘previously disadvantaged’) in that we are painfully aware that what WAS largely still IS. The past is not only in the past. Not enough has changed. Is someone who is termed ‘previously disadvantaged’ no longer so? Of course not. The advantage itself is structural and prevalent, but there is now a layer of complexity to these terms, where the idea of prior advantage arguably can and does have a crippling effect on those who wish to challenge the status quo. 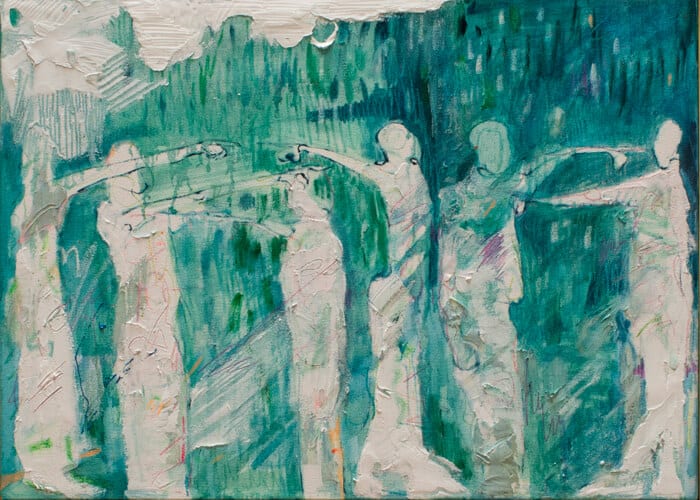 You have described your work as a reflection of the seemingly illogical, destructive, fragmented, terse and disconnected political landscape around us – how do you capture this ‘chaos’ in ‘limp’?

The content of the work has usurped the technical conversation that I am having with paint. Questioning the formal framework of the tradition of Western easel painting… In which I sit.
I am questioning the way that I was taugh to read art from a western perspective. This created the framework of logic in the way that I paint. Now, I am echoing my need to see things from a new perspectice. The painterly choices I make are often purposefully counter-inuitive, fragmented and illogical. I consciously reject the formalist strategies and try to go beyond tradition to evoke a sense of unease. My mark-making and compositional and colour choices are often fragmented and revert to a sense of childish abandon. Ideally it is my interrogation of the paint , my choice of mark-making and the structure of the surface that should be read beyong the simple metaphors that arise in the content. 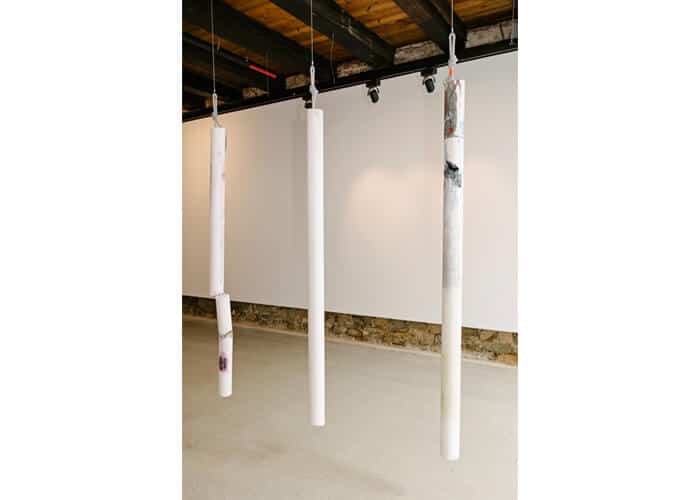 Working primarily in oil and mixed media – namely that of bees-wax, spray paint and permanent markers – you have sought to echo the current condition of South Africa. What is it about these mediums that are able to effectively reflect both the political turmoil and confusion of a generation often deemed as the ‘previously advantaged’?

Oil paint on canvas is the respected norm of a long tradition of Western easel painting. It is still this medium that fetches the highest prices at auctions and receives a large amount of respect when discussing painting. I like to use cheap materials in conversation with oils to highlight a certain fundamental confusion of value. Kokis. Permanant markers, neon pigments, spraypaint, glitterglues- adorned, cheap, synthetic materials- the plastics of our moderated reality. Our words have cheapened, our values have cheapened, we regress to childish reactionary behaviours, we’re muzzled by shame, we remain disassociated. I don’t feel that I could successfully communicate these values of a modern society by employing the use of pure expensive oil paints used in a traditional manner. 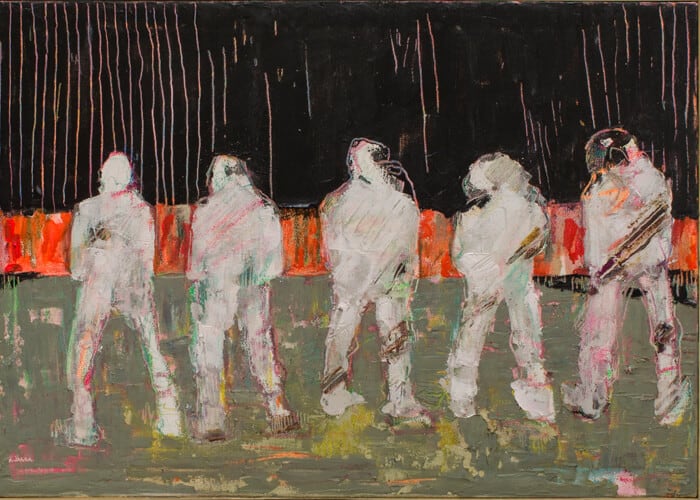 You have exhibited in galleries across South Africa – numerous group shows and three prior solo shows – and have partaken in residencies in both Istanbul and New York. Has this impacted your practice in anyway, and do you have any aspirations to exhibit anywhere else?

This is my fourth solo show in Cape Town and I’ve participated in numerous group shows in various galleries – all while I have been developing as an artist and seeking my position in the Contemporary art landscape. I was selected to two very different residencies- one in Istanbul in 2013 and recently in upstate New York in 2016. I exhibited as part of these residencies for their institutions to showcase the artists they were supporting.

Both residencies fed the content of my following shows. Istanbul was teetering on civil protests and amid a huge political shift. Last year, the US was entering the last month of the election campaigns. Both countries are still in political dissarray with huge protests in reaction to the parties in power. So yes, I have been very influenced by this energy and seeing the same moods in our country. So, my work is not purely localised- it is a reflection of the international dissapointment in old structures and I am fascinated by the current of change that has come over citizens globally. People are angry. Everywhere. Things need to change. Everywhere. And yes, I do believe that things are changing, and if this means that we now need to face up to our history properly and answer big questions about continued racial inequalities, class structures and entitlement of power, in order for change to happen, then I believe that we are moving in the right direction.