Living Between Spirituality and Reality

Professor Oseloka Osadebe is one of the most important artists to come out of Onitsha, Nigeria. He has made many contributions to the growth of contemporary art in Nigeria. An active member of the Zaria Art Society, Osadebe left Nigeria to pursue his graduate studies in the United States in 1964 and until his recent return, his amazing life and work have remained a mystery. 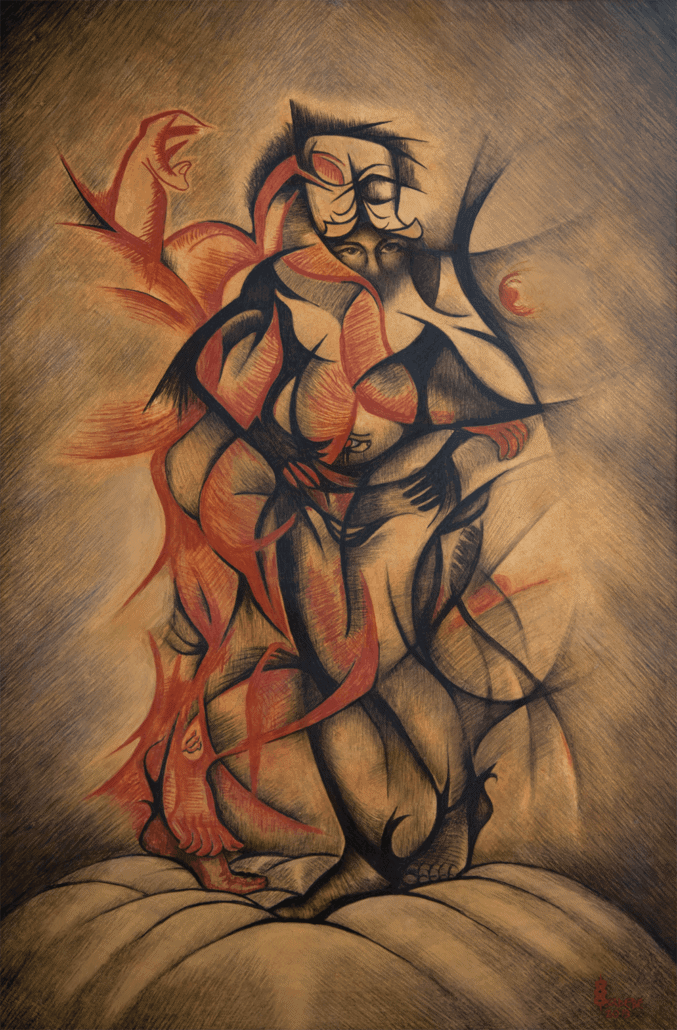 Sandra Mbanefo Obiago: Tell us how you got to study art.

Oseloka Osadebe: I was born 1934 in Onitsha into a large family of four sets of twins, myself being one of these twins. When I came out of my mother’s womb, I came out with chisels, hammers, and saws, and with these tools, I began to create art.

Did you begin with sculpting?

At my core, I am a builder, and each time I see objects, I want to take them apart so I can rebuild them. Art class was fantastic as it brought some excitement and an element of surprise, as well as experimentation. I got a scholarship to attend the Nigeria College of Arts Science and Technology in Zaria (now called the Ahmadu Bello University).

Tell me about Zaria. Historians looked at the Zaria Art Society as being the bedrock of the contemporary art movement in Nigeria.

I arrived in 1958 and left in 1962. Zaria was good. Uche Okeke, Demas Nwoko and I became very close. Students like Uche who were a year or two ahead of us – they had the courage to challenge the professors. The concept of Negritude was growing. Leopold Senghor was very powerful and in some ways was considered The African Philosopher. 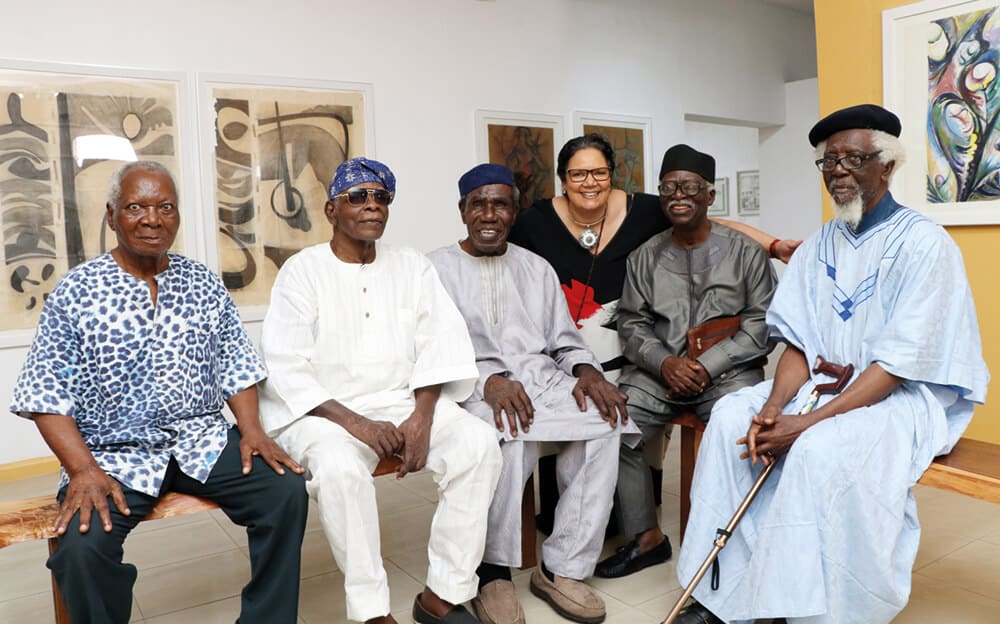 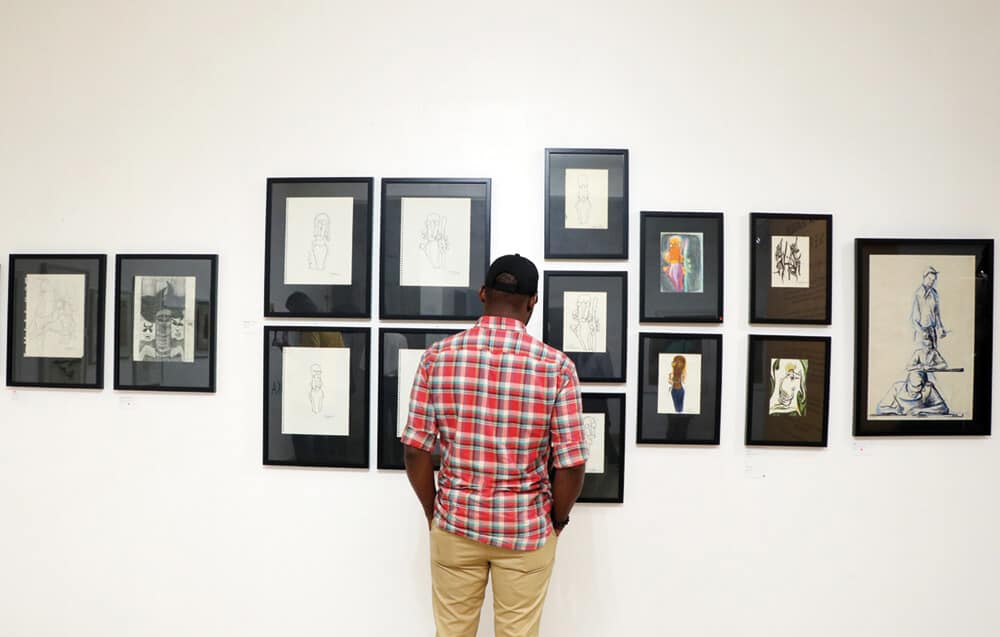 A visitor looking at the exhibition display.

So, you graduated and got a job teaching art at Nsukka before you got a fellowship to continue your studies in Chicago?

Yes, I was now standing on my own. It was 1965. I was very young and those tools that I brought from my mother’s womb were beginning to work. The Art Institute of Chicago was very good for me, and I graduated with my master’s degree after two years. It was there that I created one of my early important pieces, Iba, which was inspired by the traditional house which was the religious enclave where only the men went to participate in ceremonies and fasting.

How did you develop a deeper interest in theatre?

It was inevitable because I needed funding. Once I got my master’s, they said they were not going to fund my doctorate in art, but they would fund a master’s in theatre. I had done some sets while I was in Nsukka, and so I completed a second Masters in Theatre at the Goodman School of Drama in Chicago before Northwestern University opened their arms and received me for a doctorate. My theatre focus was in scene design which was the closest thing to visual arts, so that was the attraction for me. And rightly, I used those skills that I learned and brought them into my visual arts practice.

Tell us about your work. What does the Inner Light series mean to you?

The Inner Light series is about the inner man. God created humans, and we still must learn to perfect ourselves. There is a personality inside each of us, the soul, which is pure, and we humans don’t have the power to dictate to the soul. The soul is the real master. The soul is God within us trying to help us perfect our outer selves. 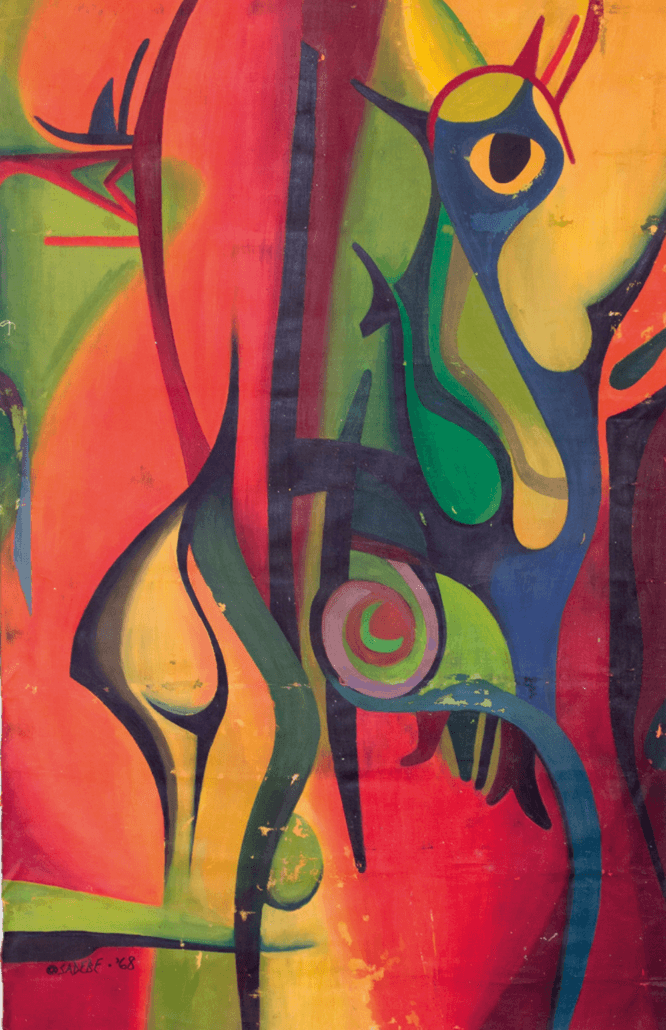 Tell me about your piece Ikemefuna.

Ikemefuna was inspired by two black singers, Ray Charles and Stevie Wonder. In his book, Ray Charles says he didn’t consider his blindness a setback, and Stevie Wonder shares the same sentiment. Both men overcame a setback that often hinders people from achieving fullness in life. There are people who do not see the positive in whatever they are experiencing and if they come to understand that there is something positive in that, then they can overcome it. I see that as a big lesson for all of us.

What about the Tree of Life series?

When I was young, my parents told me and my sisters that whenever my older siblings played outside, they were not alone. They would see a young person who did not have wings playing around them. The understanding was that they were heavenly bodies. When we got older, my sister, Dora, asked, “Why can’t we see them now?” And my parents would tell us that because there were now more people in the house, there was no need to have the angelic bodies come out to protect us.

So, the way I used this in my artwork is that Jesus Christ was a baby watching over his mother Mary. He brought a pink gem and he said to her, “This is the symbol of your goodness and purity. Someday you will recognise the importance of what you are.” Jesus and Joseph were still troubled that the public was concerned about there being no sexual connection and Joseph was continually worrying about what the public thought. The point is that Jesus says to the mother, “Someday you will come to appreciate how good you are. You are as good or better than this gem.” So, I combined the two stories. 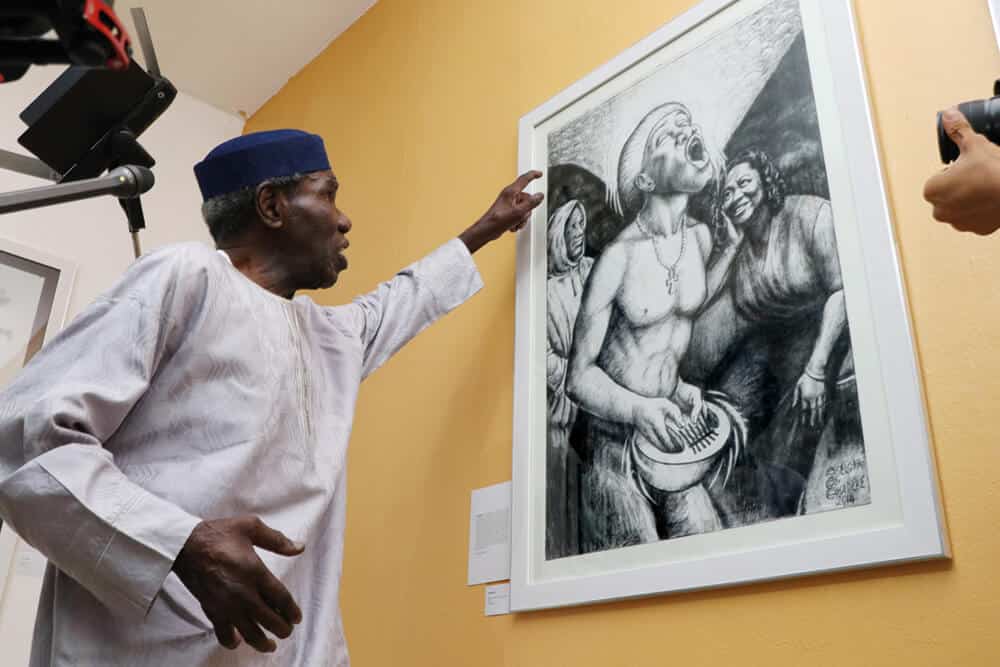 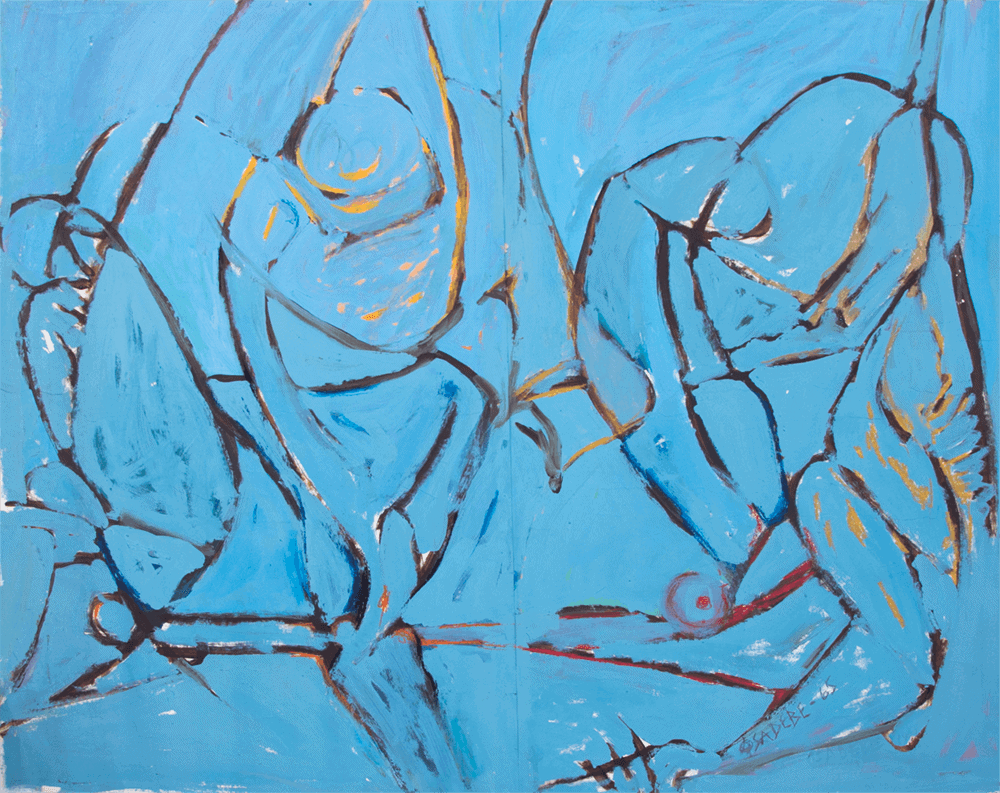 What is the legacy you want to leave behind?

I consider everything that I have done my legacy —my concept of reincarnation, as well as other religious and mystical concepts, that have led to works that I have created. — my prayer is for success. Also, many young people and aspiring artists would get inspired and continue to create. I am eighty-four, almost eighty-five years old but there is still so much creativity that God has given to me and which continues to manifest itself in my work.

ART AFRICA is committed to bringing awareness to important artists and figures in the art world who are often sidelined and almost forgotten in favour of young and emerging artists. Interview conducted in 2017 and 2018 during studio visits and phone calls.

Sandra Mbanefo Obiago is an art collector & curator, photographer, and award-winning filmmaker. She founded and runs SMO Contemporary Art which promotes the best of African creativity through exhibitions and events in non-traditional gallery spaces.