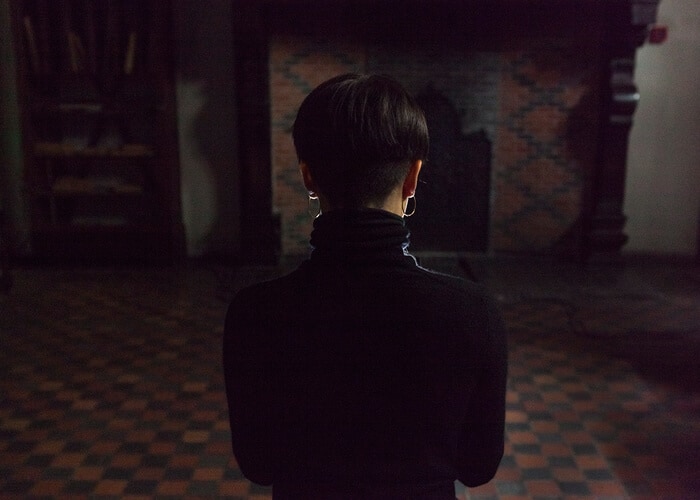 In the city centre of Antwerp, Belgium, stands the stately Museum Plantin-Moretus. Today this 16th century building houses an important part of the city’s history. The former printing house used to form the nucleus where knowledge was produced, composed, printed and published. Visitors first enter the printing room — which contains two of the oldest surviving printing presses in the world — continuing to the so-called letterkamer (letter room), which stores countless packages holding over ten ton unused printing letters. The intense labour of the largest typographical enterprise of the 16th century is still tangible. En route to the corrector’s room private offices are crossed. These chambers are lined with rare gilded leather which translates the status, luxury and wealth of the printing house. The walls breathe the spirit and ambition of an era. It is within this context that Livro arises on November 8th 2015.

A 17th century poem, which was published at Plantin-Moretus, evokes the spirit of this character created by artist Bianca Baldi (born 1985, South Africa). Livro is the personification of a book that contains the whole universe. A metaphor created by Baldi during a residency in AIR Antwerp in 2015. It refers to her larger film project Livro de Todo o Universo. The Corrector’s Room of the museum formed the backdrop for its awakening.

In the middle of this dark historical room sits a figure that declaims an eight-word verse: TOT TIBI SUNT DOTES VIRGO QUOT SIDERA CAELO – Virgin, you have as many virtues as there are stars in the sky. The performer recites all iterations of this sentence, consisting of 1022 permutations, the same number of stars in the Ptolemy’s universe.

Livro is encircled by an audience, spectators, who are surrounded by speakers. The sequence of words change; the rhythm accelerates, the motion of the performer’s body emphasizes these ‘frequencies’. Pulsating, the altering text slows down. Spectators can visually see the respiration of Livro through the movement of the performer. A second actor becomes noticeable, a manipulator of the sound. Eight speakers, each one emitting one word. Through this manipulation the audience can hear Livro’s heartbeat.

“TOT …TIBI…SUNT… DOTES…VIRGO…QUOT…SIDERA…CAELO” resonates and fills the room, embracing all participants, performer(s) and spectators. This indirect interaction between the two ‘actors’ recalls the historical activities that took place in this specific chamber. A place where human error (activity) was corrected (manipulated). Two so-called ‘correctors’ would proofread prints. One would read the text out loud whilst the other made corrections. The exhaustion of this activity is converted into a two and a half hour performance, challenging the stamina of the performer and the attention span of the spectators. 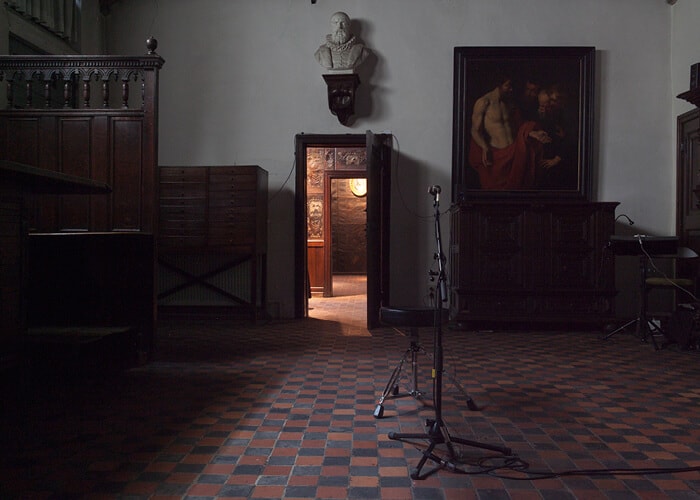 With Livro de Todo o Universo Bianca Baldi reflects upon the modern European ambition of gaining knowledge of the whole world. It accentuates slippages of language through a staging of the royal translation of Hamlet by King Luís I. By linking the port cities Antwerp and Lisbon through the literary figures of the monarch, the virgin and the book, parallels are drawn to cartography, literature and the history of publishing. The recording of this once-off performance will feature in the video installation functioning as a soundtrack for the mise-en-scène created through sculptures, an eight channel audio installation and a film.

Luís probably preferred the literary life to politics and public affairs.
He did however delight in having drinks in the convivium, the maps for him were mere abstract codes of journeys that they implied. Journeys much like those of the his tragic hero, enter Hamlet (another monarch) weighing up truth against beauty.

‘The Image Generator II’ will form the context of a provisional preview of Livro de Todo o Universo. The character Livro was brought to life following a residency at AIR Antwerp in 2015 in collaboration with the Museum Plantin Moretus Antwerpen. This exhibition, which will be on display for one month, is the result of a collaboration of four Antwerp art institutes. Departing from a three-day happening, the boundaries between visual and performance art will be challenged. During these three days spectators can witness various performative actions on different moments. Traces of these actions will form the foundation for the continuing exhibition that can be visited until the 28th February 2016.

Pamela Stuyck is an independent researcher with a specific interest in modern and contemporary art. As part of the research collective ‘No Performance Please’ she investigates the boundaries between performance and visual art within different artistic contexts.