The signatory photograph in Sabelo Mlangeni’s ‘Kholwa: The Longing of Belonging’ (Museum of Archaeology and Anthropology, Cambridge, UK) is an enigmatic thing. It is used as the poster image for an exhibition dedicated to exploring the Zionist religious communities of Southern Africa and the place of the photographer as participant/observer in the world he pictures. Signalling the end of the reel and the end of the road, the photograph comprises a partial view of three uniformed men, huddled in a group at the centre of a dusty path. Up to their necks, we see them clearly from trainers to tunics. But above the shoulders there is nothing but a whitened world: sans heads or faces the figures become obscured by a light-filled absence that reveals the materiality and measurability of a roll of film, simultaneously suggesting the infinity and incomprehensibility of space.

“amongst the earth-bound rituals of belonging and being are more ethereal shots – using blur and double exposure to suggest trances and visions, apparitions and half-glimpsed ghosts that disrupt the clarity of quotidian life and seek to materialise the formlessness of faith”

The photograph, a hand printed silver gelatin print like all of the fifty or so works in the show, is emblematic of the complexity of Mlangeni’s project. It does two things at once. On the one hand it provides detailed information of a specific community: the costume, staff, stature and setting of the supplicants indicate a rural collectivity of believers gathered en route to or from prayer and ritual. But the devices they hold are neither arcane nor esoteric. In fact it is their cell phones that unite them in a close and conspiratorial huddle – insinuating their practice into a modern technological framework for all its references and recourse to the past. The photograph tells us, therefore, that the community finds itself in history – living out its beliefs amongst the paraphernalia and gizmos of our time. On the other hand, the expanse of pale ‘nothingness’ above them seems to reference the temporality of the spirit world to which the men’s costumes gesture: ineffable, intangible and irreducible to image – this is an infinite space of projection, of longing and belief, processes which are not easily pictured or portrayed in a print. In it the faithful lose their heads, even if their feet and hands remain rooted in the here and now. The white-out of more than half of the photograph therefore, defies the detail and declarative remit of the document, its capacity to fix identities and daily lives on the ground, and speaks instead to celestial dreams and desires while asserting both the limitations of the image’s capacity to inform and the finitude of a roll of film.

Mlangeni’s project veers from the descriptive to the otherworldly. It comprises landscapes peopled with processions and congregants replete with caps and shawls, crisp and white against the grey tonalities and textures of the bush, cars and busses from which supplicants spill, banners and flags emblazoned with the insignia and names of spiritual leaders, baptisms and bathings, as well as portraits of elders and healers, children and celebrants. But, amongst the earth-bound rituals of belonging and being are more ethereal shots – using blur and double exposure to suggest trances and visions, apparitions and half-glimpsed ghosts that disrupt the clarity of quotidian life and seek to materialise the formlessness of faith. Here figures multiply and overlap, fuse and fragment while the distinctions between solid shape and surrounding space disappear. 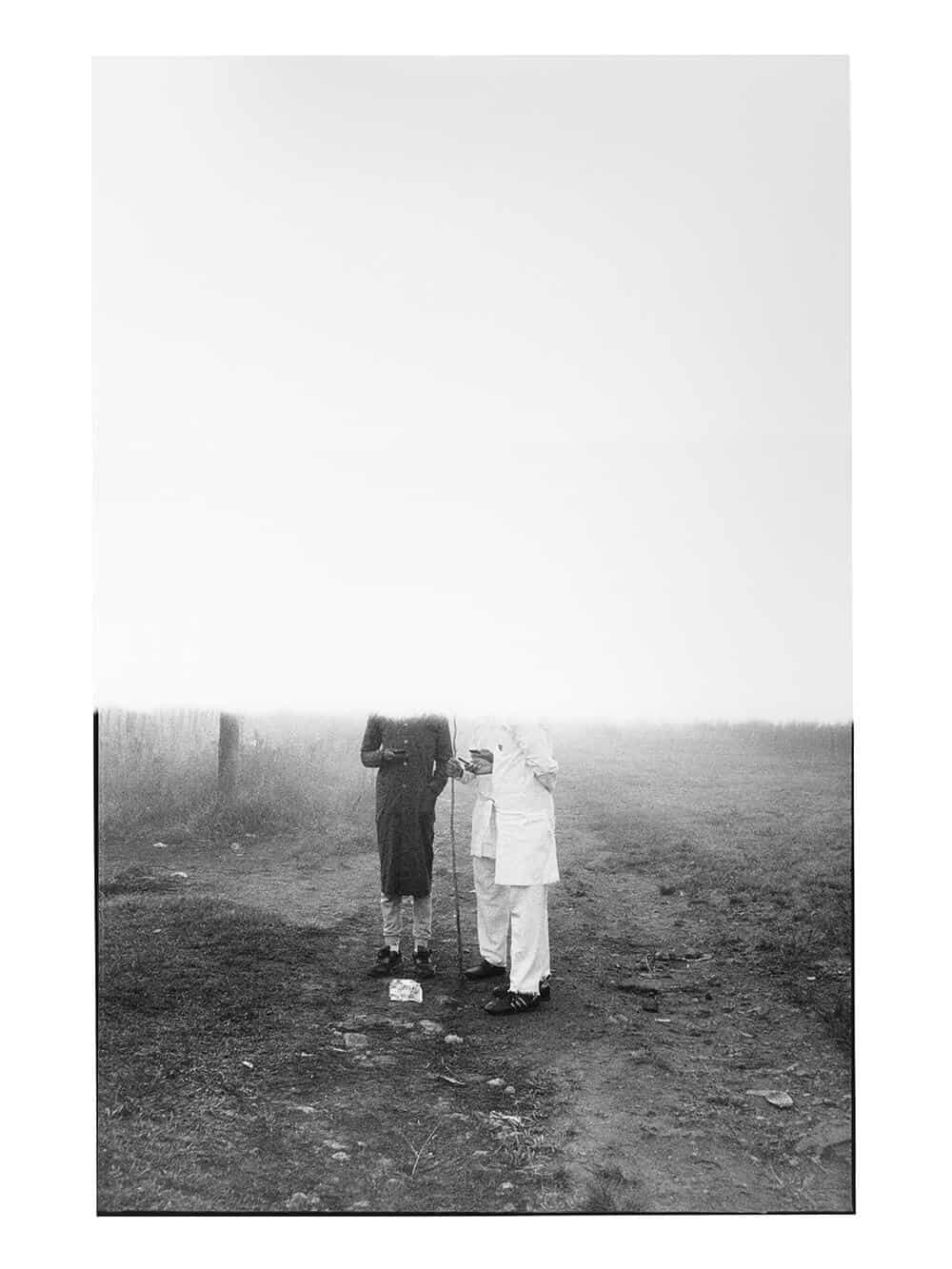 Sabelo Mlangeni, In Time, A morning after Umlindelo, 2016. Image courtesy of the artist.

“he longs to belong, but belongs to longing, always deferred and denied. It is the beauty of this project that it articulates what is lost and found in this process.”

For Mlangeni, the separation between document and poetic reverie is unimportant. He moves freely between these representational poles using the one to complicate the other and sometimes, as in our signatory image, deploying both modes in the very same work. This is as much to do with his proximate relationship to his protagonists, from whom no distance or detachment can be sustained, as it is a meditation on the limits and capacities of photography. Not least in relation to the picturing of religious and spiritual practices. ‘Kholwa: The Longing of Belonging’ emerges from Mlangeni’s collaboration with historian Joel Cabrita, whose important work on the history of Zionist Churches, their origins in North America, radical egalitarianism and anti-establishment roots – not to mention their complex negotiation of African indigenous practices, colonial and Apartheid ideologies, and national and liberatory narratives, is the subject of a series of articles and a forthcoming book – The People’s Zion: South Africa, the United States and a Transatlantic Faith-Healing Movement. Mlangeni’s highly personalised project (which predates the collaboration) does not presume to illustrate Cabrita’s research. Instead it provides a parallel and personal perspective that relates to and departs from visual precedents.

South African photographers have long been fascinated by the ritual splendour and spirituality of the Zionist Churches. Little known but fascinating amongst these is the documentary series produced by Constance Stuart Larrabee in the 1930s and 40s in which she constructs an image of religious hybridity – seemingly bringing together African traditions of singing and drumming, Jewish symbolism (stars of David, menorahs and rams horns are pictured) and Christian clerical garb and crosses against the backdrop of a modest urban enclave outside Johannesburg. More recently, photographers such as Paul Weinberg, Andrew Tshabangu and Santu Mofokeng have all used black and white photography to depart from the dispassionate depiction of the pious in order to evoke the altered consciousness and transcendent states of mind that prayer and religious performance can unleash. Movement, transparency, repetition and a kind of smudged sfumato type shadowing are the hallmark of such suggestive portrayals.

Mlangeni is heir to such pictorial precedents. But his project departs from them too. For one thing, he is a participant in the community and culture that he pictures. There is an immersion in the crowd that speaks of identification and belonging. In Ibhasi neBandla (2015), for example, the backs and partial views of two male congregants (following a crowded bus) are so close to the camera that it’s as if they stand in for the cameraman himself, looking on to the scene ahead. Back views abound in the series, creating surrogate viewpoints from which the world is seen while figuring the gaze of the photographer himself. He appears embodied in the people he observes. And yet, there is also a pained detachment and distance in the work, as if belonging comes at a price. The self is shielded and protected from the crowd, behind the camera and the barriers it captures: a rocky outcrop, a ledge, a blockage in the field of vision. Having to negotiate his own positionality – the wayward son, the departed one, the returnee to the fold and the folk – he longs to belong, but belongs to longing, always deferred and denied. It is the beauty of this project that it articulates what is lost and found in this process. 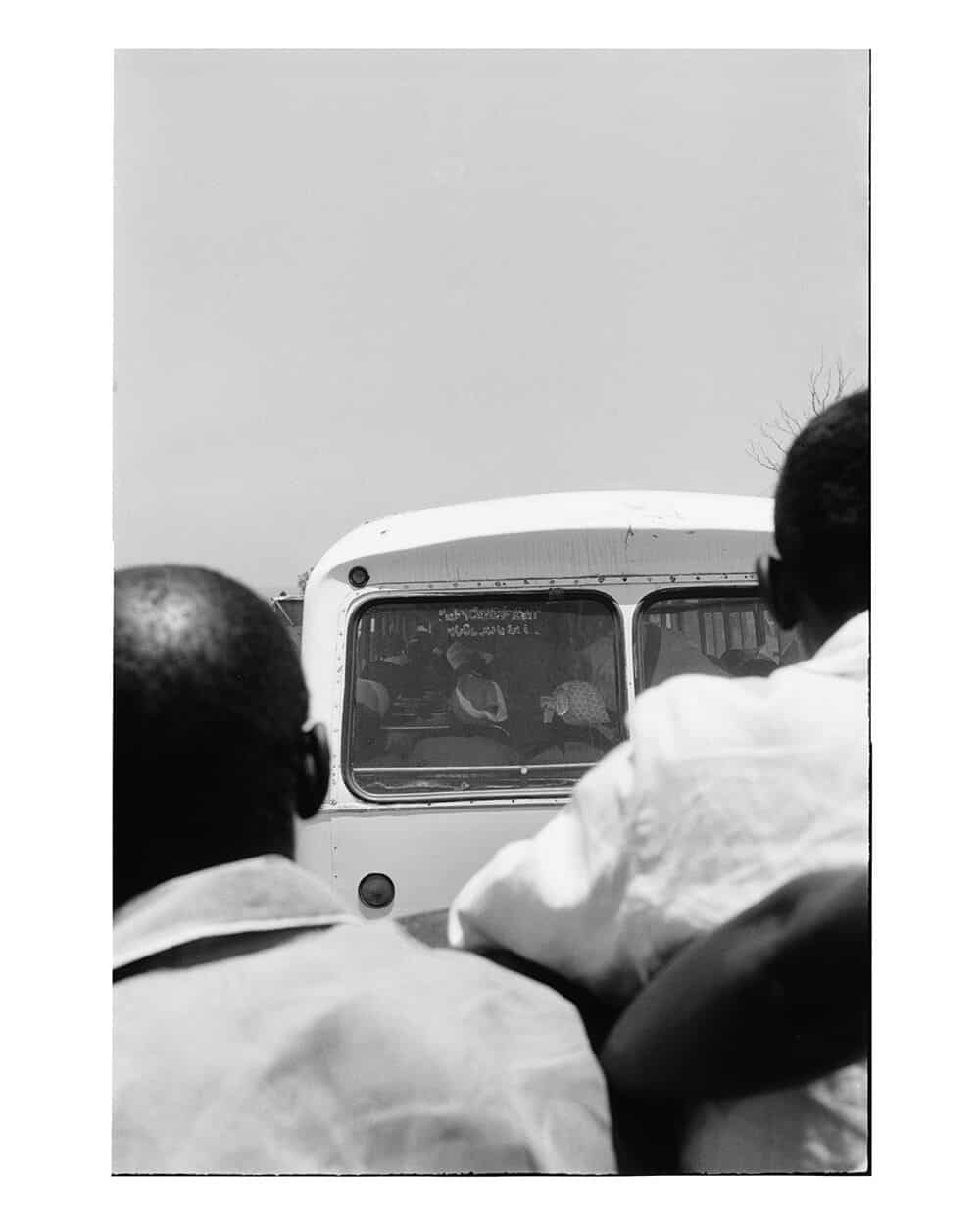